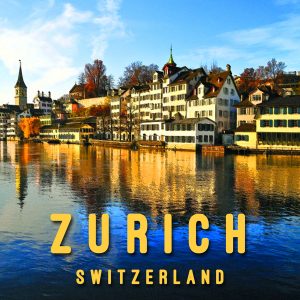 ‘Z’ was supposed to be the zebra enclosure at the Zürich Zoo and right up till I was standing in the very long line at the Tourist Centre, trying to find the best way to get there, that was exactly where Brian was heading. Factors like the poor weather and the burnt foot (plus his zero interest in zoos) were impacting on Ken’s enthusiasm, but the final disincentive was the ticker-tape billboard. He gazed longingly at the ad continually spooling across the screen overhead then turned and did the puppy-eyes thing at me and before I knew it I was saying “Two tickets to the FIFA Museum, thanks”. Yeah, Barb’s a sucker.

But, self-interest aside, Ken knows his old mate pretty well and yes, Brian would be much happier among this wealth of football history than trying to settle in with zebras. The museum hadn’t even been around in his lifetime (it was opened in February 2016) but has become one of Zürich’s top cultural attractions, despite some media ridiculing it as “Sepp Blatter’s final vanity project”. Besides all the interactive stations it has over 1,000 items of football memorabilia, photos, and 500 or so videos showing on 60 screens – hog heaven for any football lover and a most effective pain diversion for Ole Hoppy, who limped from exhibit to exhibit and engaged in animated soccer discussions with staff and other visiting fans. It was an impressive collection, even to me, and presented some very appropriate drop ops for Brian.

The guards were friendly but everywhere, but I was becoming so adept at the covert sprinkle that it only took a little patience to wait them out. He now sits under a display stand that honours the work volunteers do to keep the sport happening… and for all the support roles Brian performed over the years, that was a very suitable resting place. But truth be told I wanted him a little closer to the action. Thick glass surrounded the actual World Cup, preventing him from climbing inside the trophy, but a tactile display of the evolution of boots and balls from 1900 to 2014, was perfect. I deposited a few pinches of ash into the toe of the oldest boot then got Ken to hold it up for a photo, but its sole wasn’t in the best shape and some Brian drifted out the worn bits onto the astro turf below. Sometimes he just doesn’t make it easy.

Zürich had picked up a little from our initial impression the night before. After 21 hours of planes and airports we had been mighty stuffed and just wanted to get to our accommodation and crash. It was only a short bus ride to the Oerlikon apartment but the snarly driver was not interested in our shiny new euros and waved us towards the ticket machine on the kerb. He wasn’t about to wait while we dithered around with the currency (Swiss francs – who knew?) and the other passengers just tsked impatiently at the clueless old backpackers trying to work out where the credit card goes.

We finally arrived at the apartment block and keyed in the access code they’d emailed me. Two phone calls and five more codes later my jetlagged brain accepted our first night here would be spent on the lobby tiles trying to catch some zeds to the tune of suburban trains (“close to transport”) and aroma of chapli kebabs (“Pakistani restaurant next door”). But all’s well etc – at about 11pm the remote manager finally drove over to let us in and the near-tears drama morphed into nothing more than an interesting anecdote for later.

Getting around in daylight hours was way easier and the locals we met were generally helpful. I did jeopardise cultural relations a bit when I asked for toast in a breakfast café (“We are Swiss!” she huffed) but despite the country’s imperious reputation towards foreigners, we only copped such attitude a couple of times. When the FIFA anaesthetic wore off Ken’s foot he opted to relax in the Tessinerplatz while I did a quick recce of the nearby waterfront park. I had a map and while that never guarantees I won’t get lost, this time I found my way back to where he was chatting happily in the autumn sun. The pain was not improving though and holiday or not, it was time to doctor up. She was predictably efficient and soon had him rebandaged and redrugged – and newly appreciative of Australia’s affordable health care.

We’d certainly added a doozy of a destination to the ash drop mission but unfortunately didn’t have time to check out any of the country’s natural assets. The much anticipated train ride from Zürich to Milan would take us through some pretty spectacular scenery but the lakes and villages and mountains were blurred by rain and cloud and for a lot of it all we could see out the window was mist and our own reflection. The best of (non-football related) Switzerland will just have to wait for another visit. 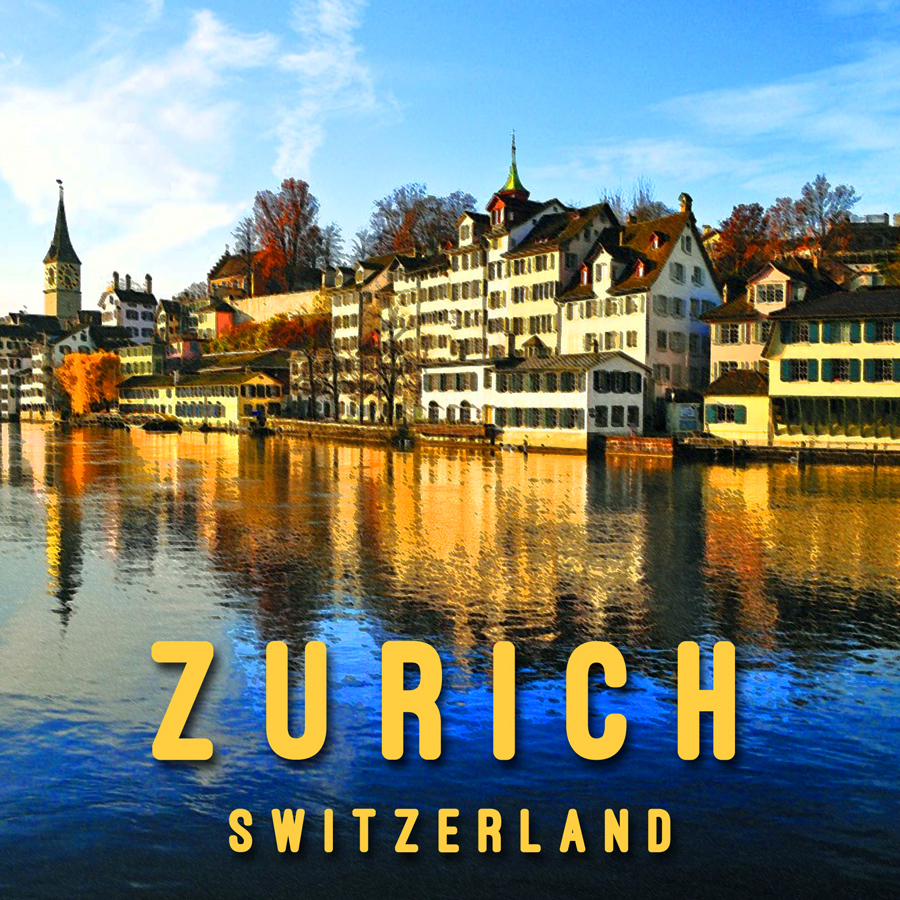 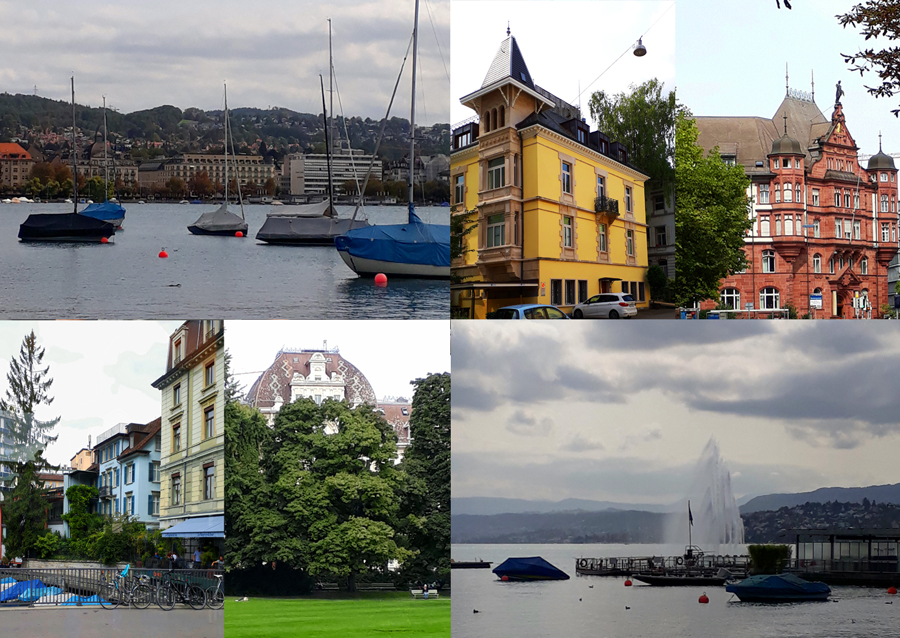 It was the dullest of days weather-wise but the Arboretum and Botanical Gardens on the shore of Zürichsee (Lake Zürich) was still an interesting place to explore. 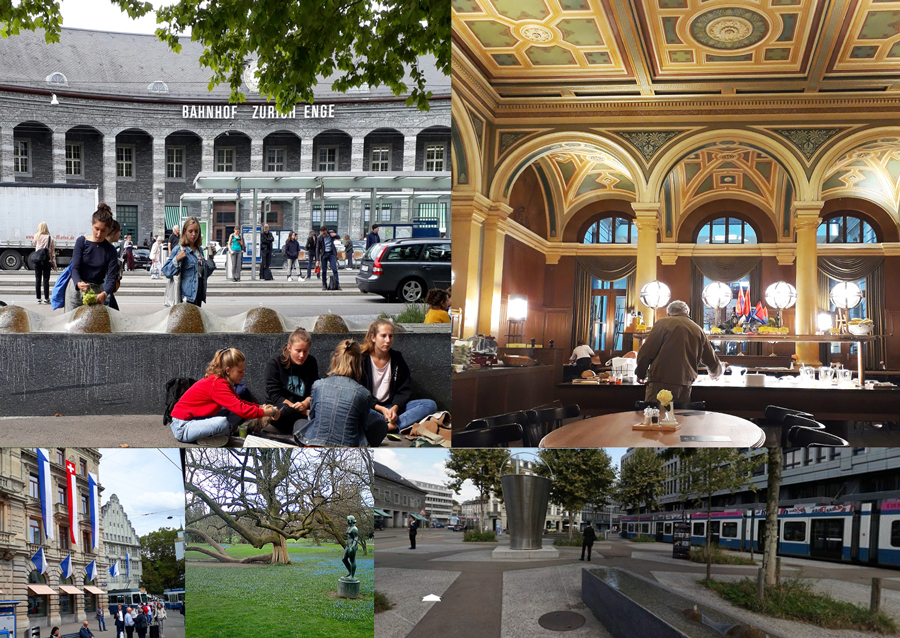 Around the Tessinerplatz opposite the train and tram station, including the granite fountain, one of 1,200 around Zürich; breakfast at the Atrio Café in Shopsville in the city’s main train station; the Aphrodite statue near the Arboretum’s giant cucumber magnolia, which had been imported from the US; the Hauptsitz der Credit Suisse in Paradeplatz. 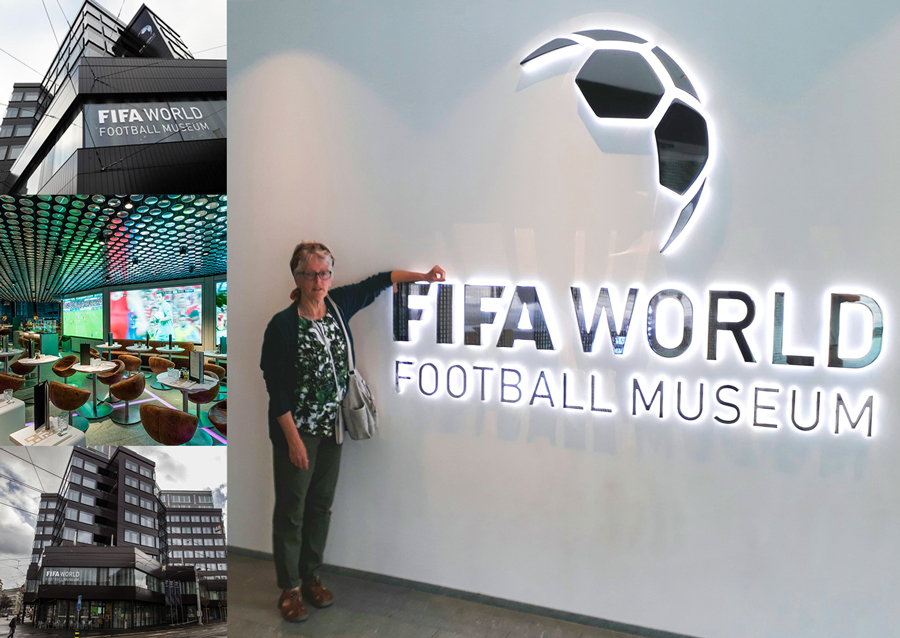 Out of my zone at the FIFA Museum… 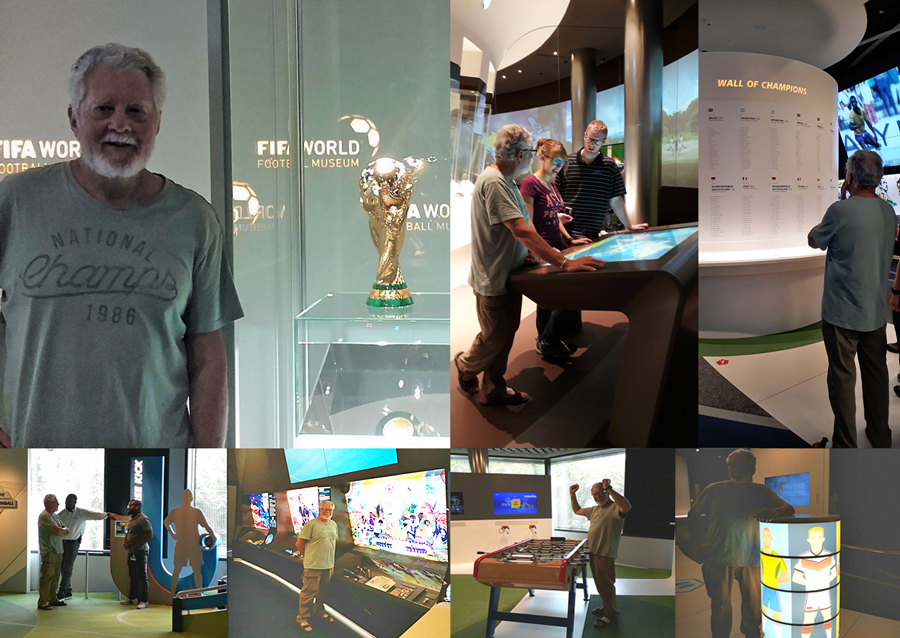 …and Ken in his, immersed in football nirvana. 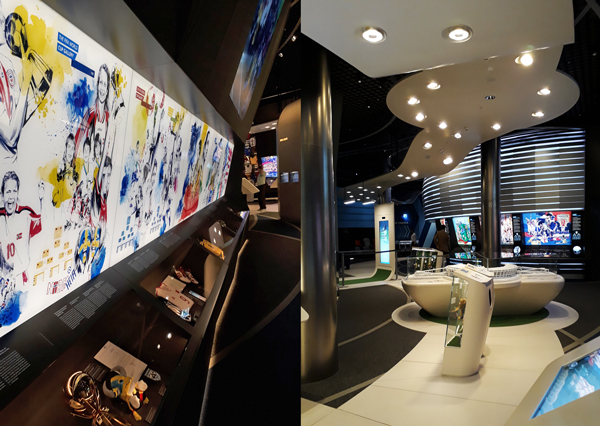 Audiovisual stations document the history and impact of football around the world. 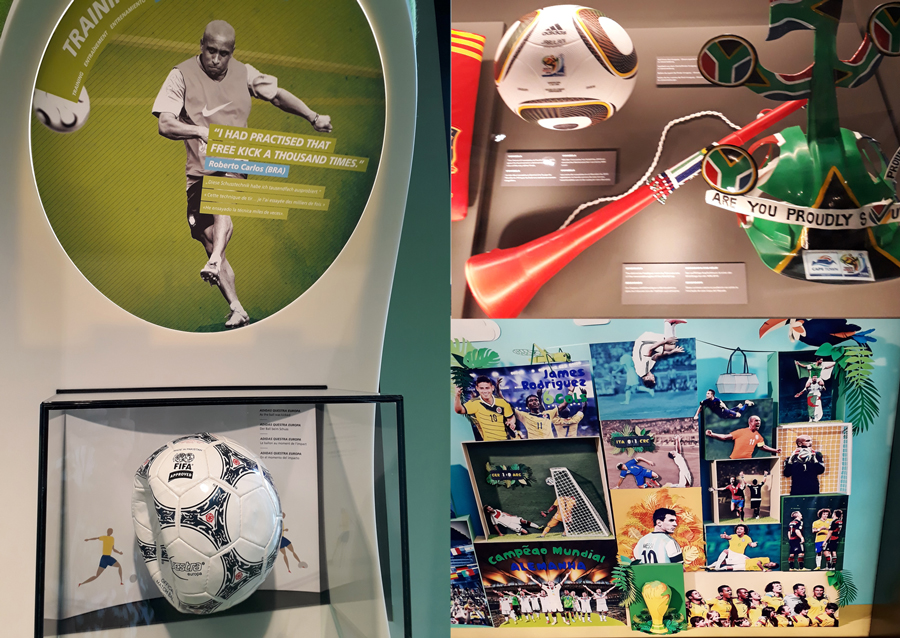 Exhibitions of famous moments in football include the ‘impossible’ free kick by Brazil’s Roberto Carlos, 20 years ago, and the controversial vuvuzelas used in the 2010 World Cup to cheer on South Africa. 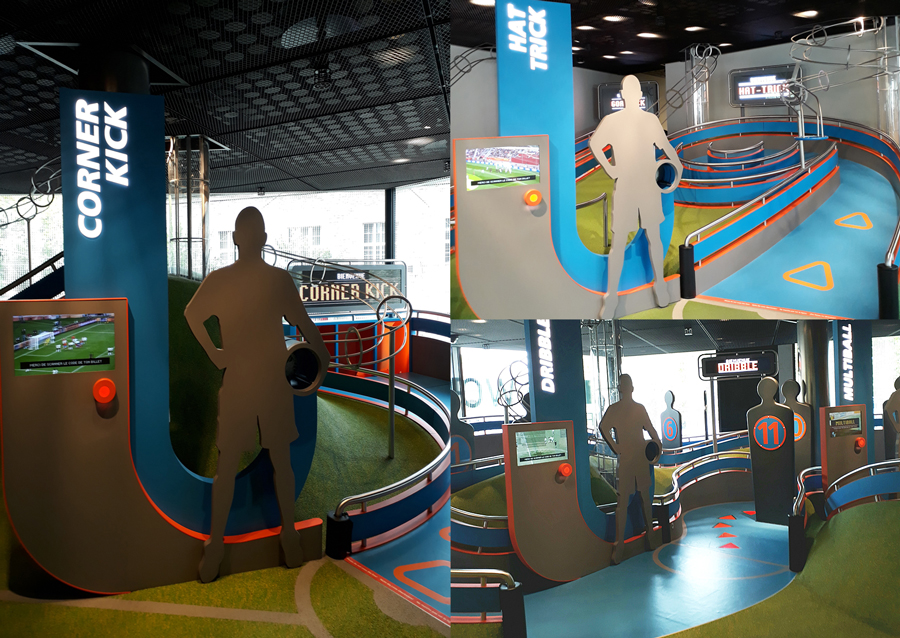 Visitors (but not us) are encouraged to take a shot at the various activity stations. 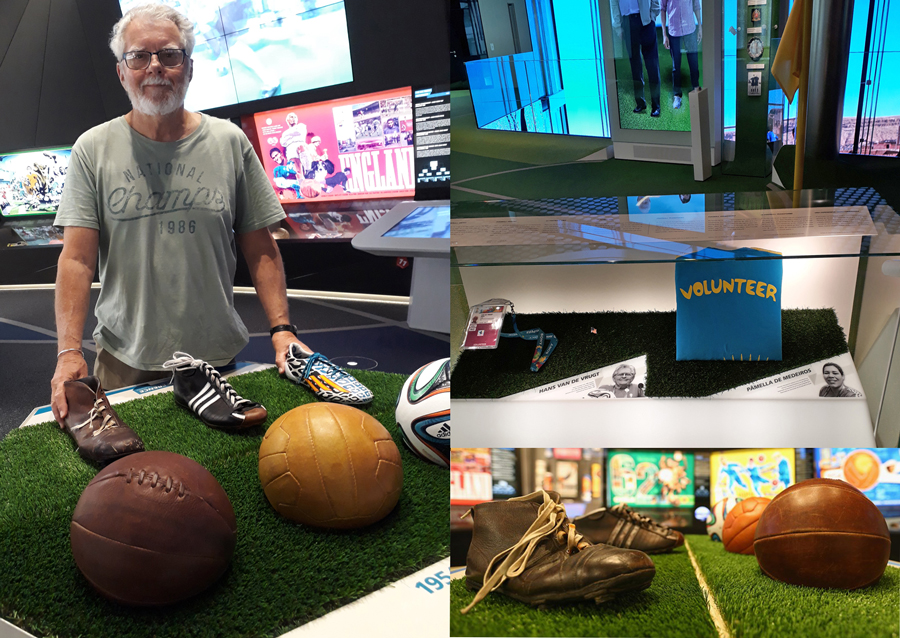 The tribute to volunteers and the boot from 1900 (and the astroturf underneath) that now all hold some Brian. 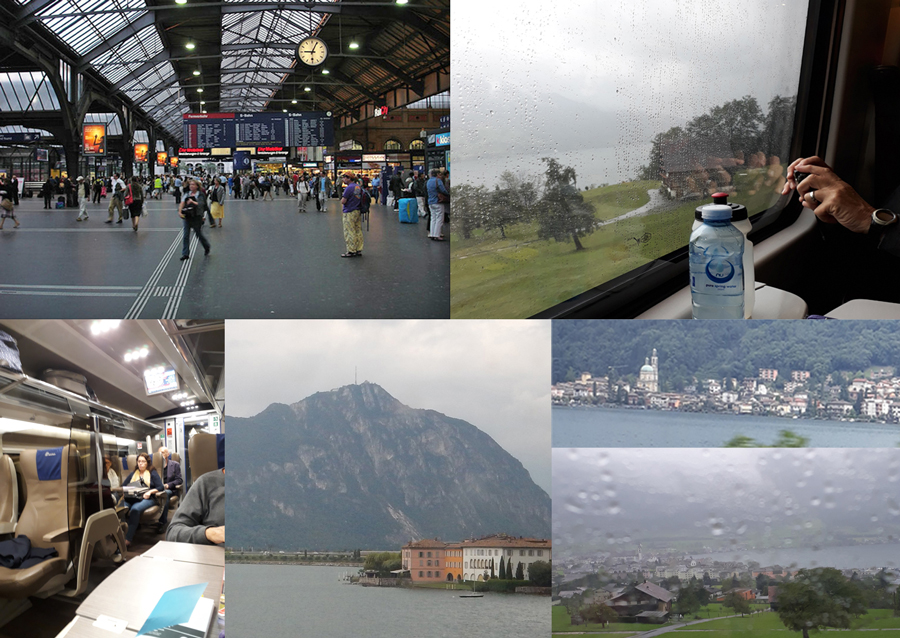 Zürich HB (Hauptbahnhof) is the country’s oldest and largest train station, and serves almost 300 trains and 3,500 passengers every day; the Trenitalia train we took from Zürich to Florence via Milan was pretty flash… the view on this wet and cloudy day, not so much.