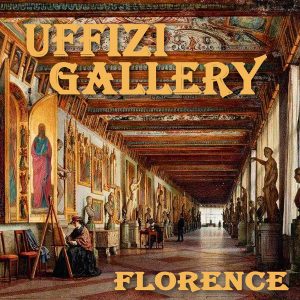 You’re never going to escape religion in Florence (140 churches – yikes) but staying at a convent is just asking for it. When Brian’s travel-savvy cousins told us about monasterystays.com and the bargains on offer however… well turns out it’s not so hard to reconcile rampant atheism with the greater belief in saving a quid. I repressed memories of knuckle-whacking Sister Vincent (Ken was blissfully free of Catholic school consciousness) and managed to rein in my potty mouth for the couple of days we were at the Istituto Suore di Santa Elisabetta. Though I’d half expected hessian sheets and lye soap and waking up to prayer-tolling bells at 4am it was remarkably comfortable, even with its crucifixes and cranky martyrs glaring down from every wall. The nun who served breakfast was a bit snappy when I sat at the wrong table but there were no Hail Mary penances and she didn’t reinforce her displeasure with a ruler. We were good to go.

The convent is conveniently located just outside the city centre and while the holy frescoes, paintings, tabernacles and statues don’t end once you get beyond its high walls, Florence balances its religious and secular selves well. Beautiful architecture, picturesque Tuscany landscape, friendly locals, distinctive art and lip-smackin’ cuisine – it ticks all the boxes to attract its estimated 16 million tourists each year… most of whom seemed to be standing in the ticket line with us at the Uffizi. Ken’s foot would not last the predicted two-hour wait so when a woman hawking group tours approached we grabbed the chance to queue jump. It did cost – lots – but we considered our euros well spent when we smugly bypassed all those other visitors (though it still took half an hour to get through the door and security). I wondered how Ken would handle all the stairs but that boy’s got plenty of fight in him and only rested up a couple of times.

It was on one of those breaks that I found Brian’s next drop spot. The guards would make themselves known whenever anyone got too close to one of the famous exhibits so classics like The Birth of Venus were out, but I continued to hang back from the group and poke around the busts of a few lesser knowns for useful gaps between them and their pedestals (the gallery runs sensory tours for the vision impaired and I was fully prepared to play the myopia card if challenged). The head of some tormented looking saint in the East Corridor seemed to have a reasonable space for a pinch or two of ashes and I could sidle right up beside it to explore its potential, but when the crowd suddenly thinned I just looked too suspicious standing there feeling up the marble, and slunk off.

After a couple of hours we were both getting a bit Renaissanced out and when Ken plonked onto a large couch in the Leonardo Room, inspiration struck. Brian was even more of a heathen than me so what better way to rile up my favourite infidel than to squish some of him down the back of the seat that gazes on to The Baptism of Christ? This image of John the Baptist doing his thing with a bit of the Jordan River was produced in about 1475 by Andrea del Verrocchio, assisted by his pupil Leonardo da Vinci (who’s credited with painting the figure of Christ, the angel, and most of the background). The two-metre high piece was originally commissioned by the church of San Salvi and has only been with the Uffizi since 1959.

Walking back to the convent we crossed the Ponte Vecchio and I sprinkled some more Brian into the Arno. I remember him telling me how standing on that noisy, messy, patchwork bridge had made him feel he was in the real Italy, and I could relate. A bit further on the heavens opened (it was pissing down but you can’t say that while holding a nun’s umbrella) and we decided to take shelter in a tiny Irish pub. The James Joyce contributed much more to Ken’s recovery than somewhere to rest the foot – it had the best beer and nibbles and a barman who, language differences aside, just loved to talk football. This pleasurable interlude was enhanced for Ken by live soccer games streamed on the TV, and for Barb by gin and reliable wi-fi.

Exit two days in Forte dei Marmi then we returned to Florence for a night, not to the convent but to one of the most comfortable hostels I’ve ever experienced. The WOW had everything we needed and was only a short walk to the Piazza del Duomo, where we met up with Martin Kelleher, an expat friend working in Italy and UK. The next night we’d fly out to Santorini but the highlight of our last day in Italy was a ‘treasure hunt’ to locate a parcel Sam and Liana had hidden for us in a stone wall in a Maiano olive grove, when they were there the previous May. They might be living in the UK for another 18 months and missing them as much as I did already, finding their gift and reading their note was almost as good as seeing them in person. 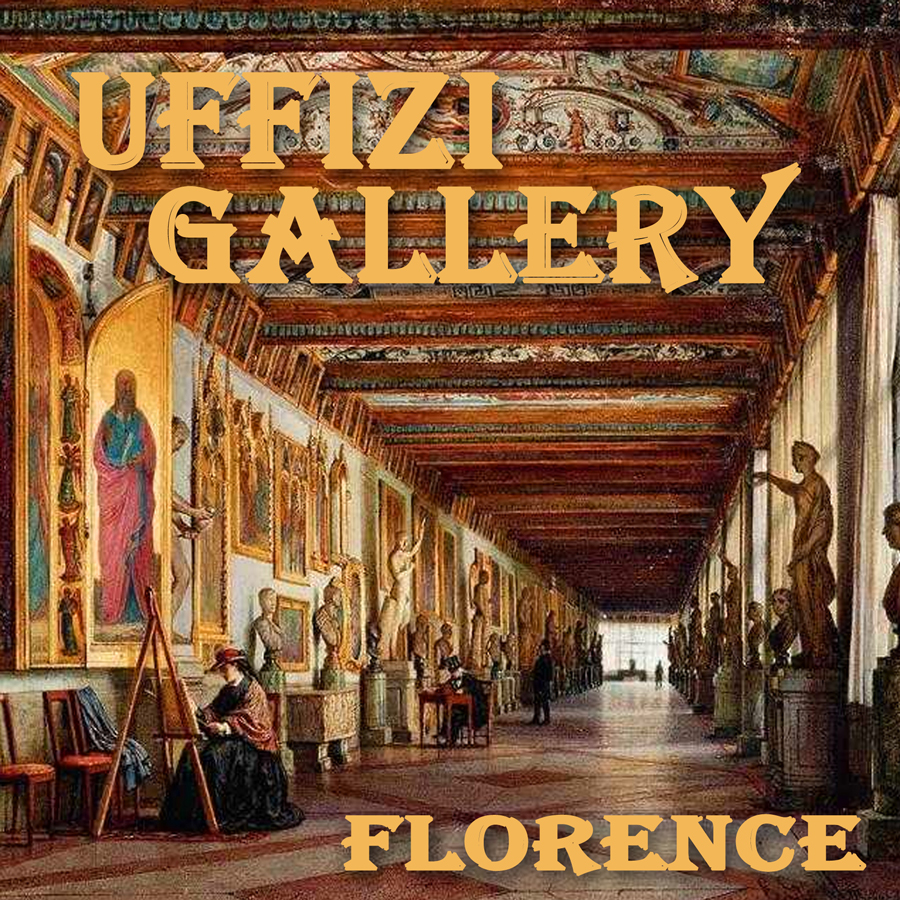 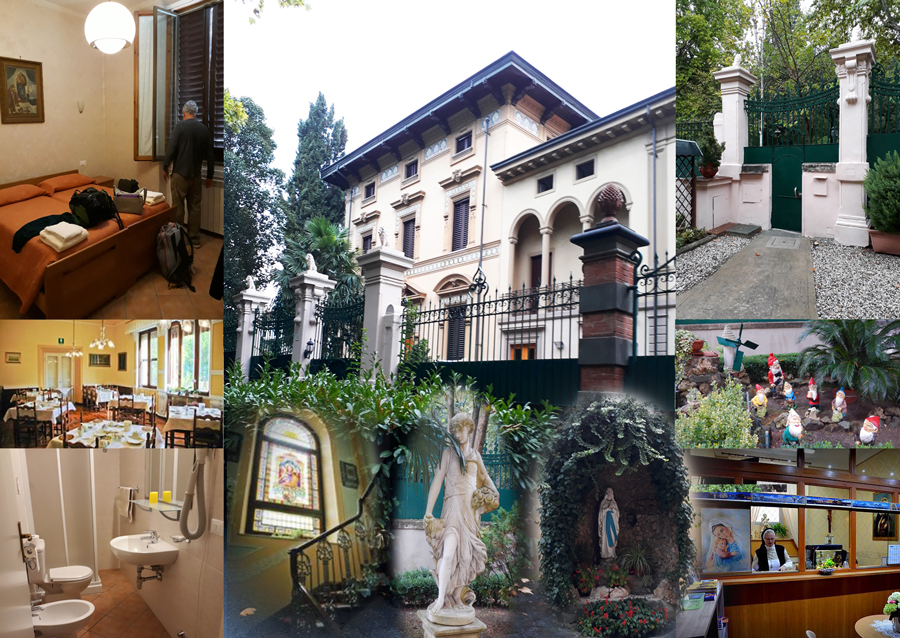 Around the Istituto Suore di Santa Elisabetta in Florence : the dining room; our ensuite bathroom (and we’re now hooked on bidets); a curious collection of gnomes muscled in with the holy garden ornaments; our simple but comfortable bedroom (the nuns were pretty good sports and had pushed the beds together). 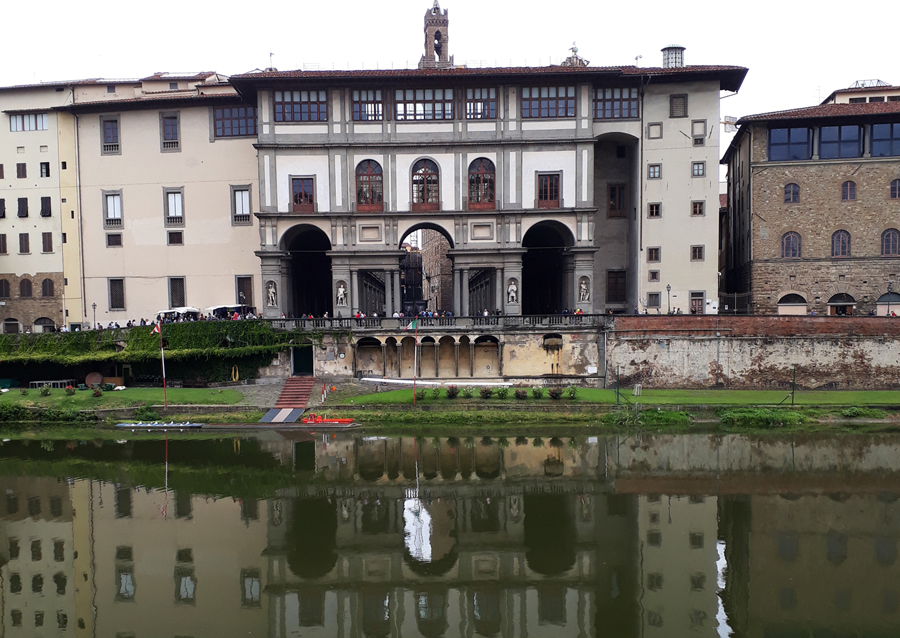 The Uffizi Art Museum, the most visited gallery in Italy, holds a collection of priceless Renaissance artworks in its 16th century gallery building on Piazzale degli Uffizi. The Torre di Arnolfo rises in the background. 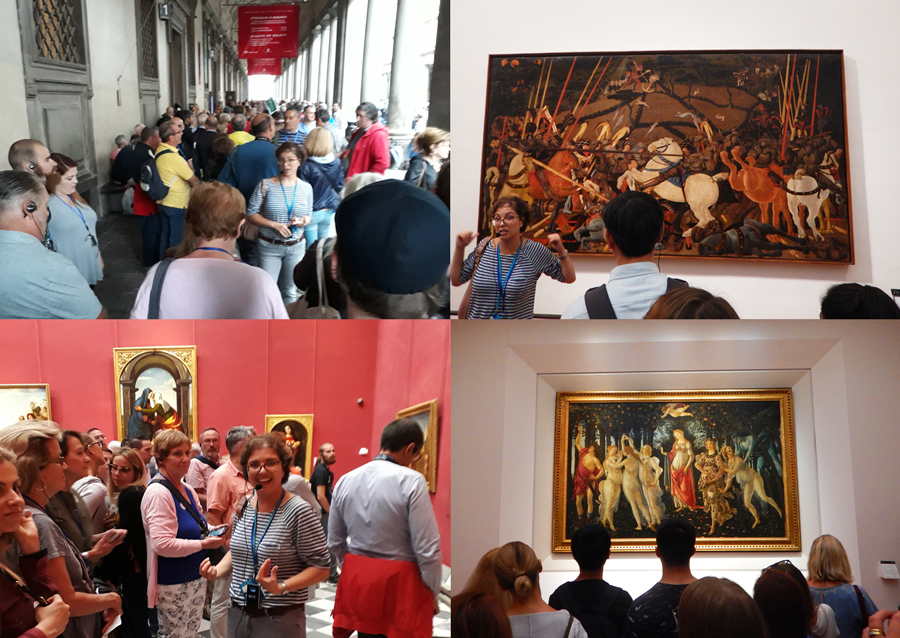 Our perky little guide Laura was a wealth of knowledge on art history – and inadvertently presented a rabbit sighting (top right) in the background of Paolo Uccello’s mouthful of a masterpiece ‘Niccolo Mauruzi da Tolentino unseats Bernadino della Ciarda at the Battle of San Romano’. 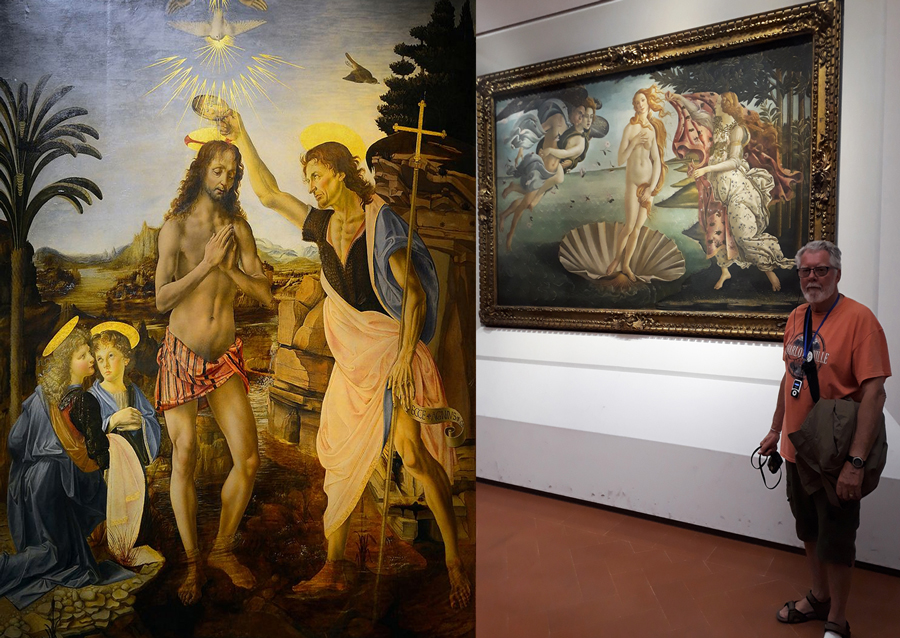 ‘The Baptism of Christ’ by Verroccio and da Vinci – what Brian gets to gaze on eternally… or at least until they replace the upholstery on the viewing seat; Ken in front of Botticelli’s 1480 depiction of ‘The Birth of Venus’. 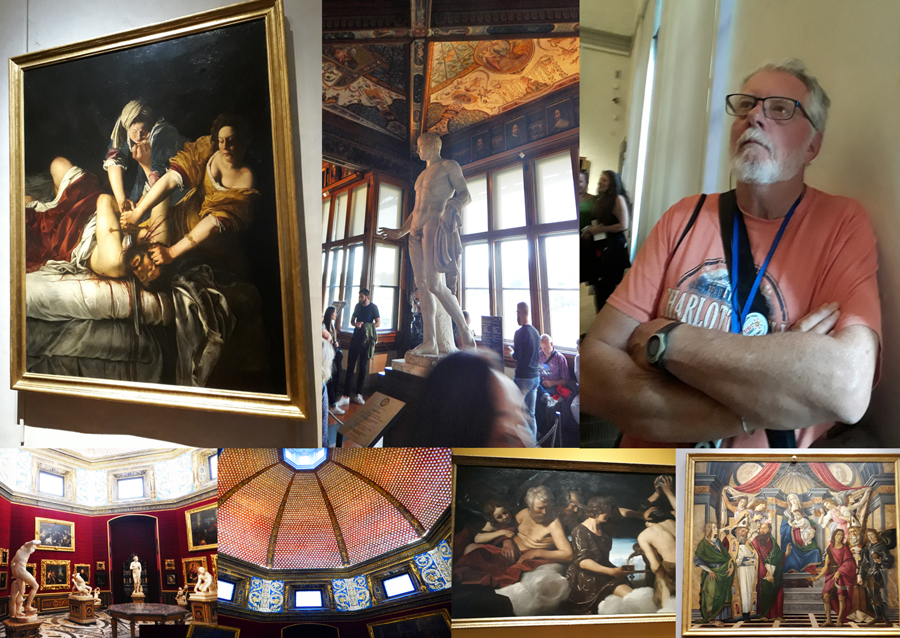 The Uffizi’s famous works include Artemisia Gentileschi’s gory 1620 ‘Judith beheading Holofernes’ and a popular attraction, the Doriforo sculpture – that my classic art ignorance (and Ken’s fraudulent certainty) – convinced me was Michaelangelo’s David. Not sure if this is Ken’s intensely interested or ready-to-call-it-a-day face. 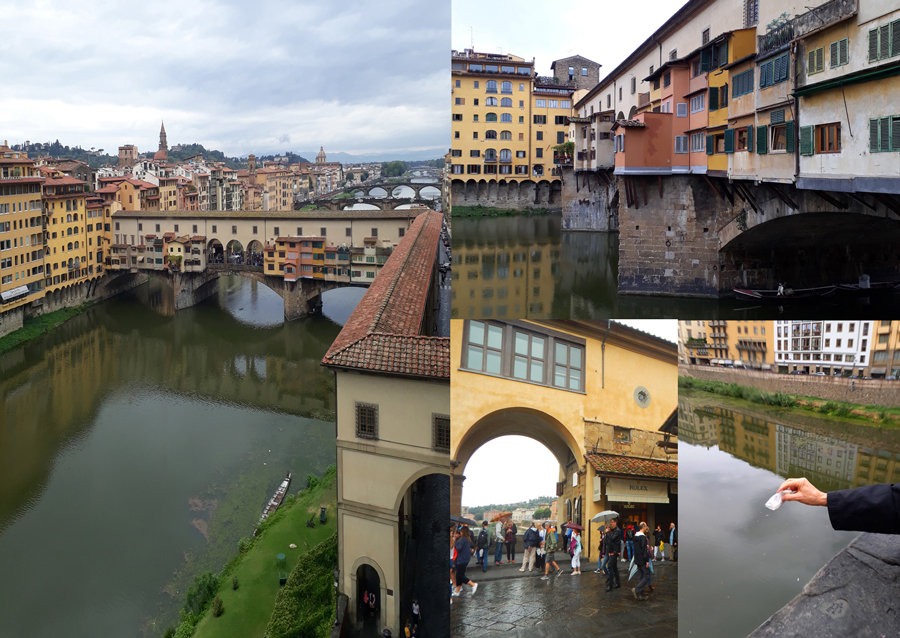 The colourful Ponte Vecchio – where Brian was launched into the Arno River – has an endless collection of shops, mostly jewellers. 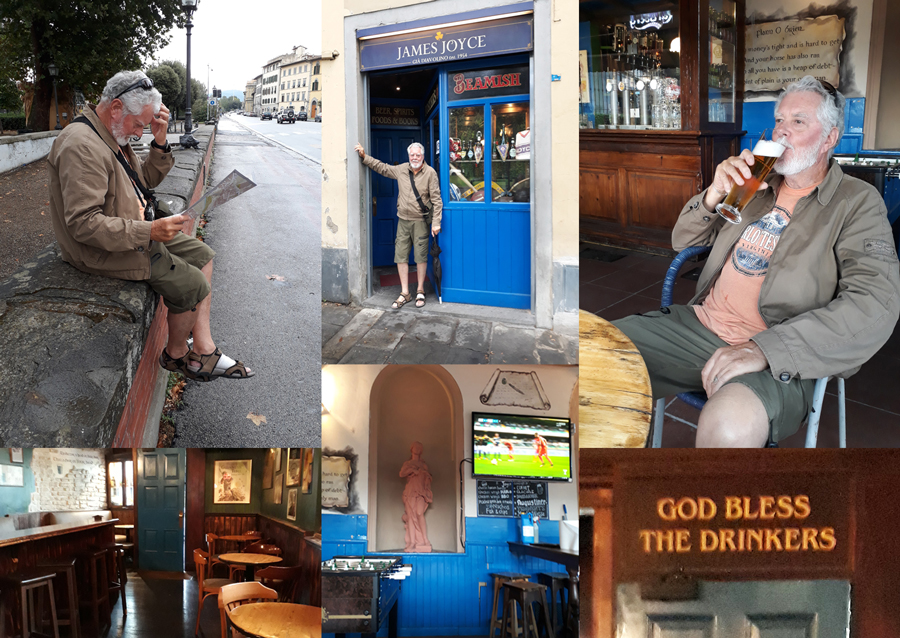 Ken, saved from that old “Now how do I find my way back to the convent without appearing lost?” dilemma by a conveniently situated Irish pub. 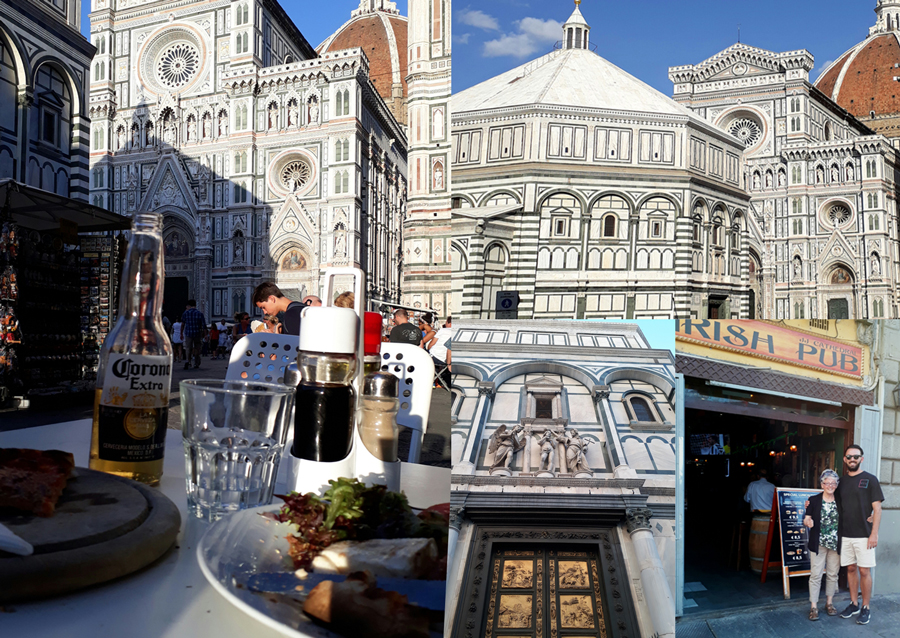 Some interesting things we found on a beautiful autumn afternoon at the Piazza del Duomo: the Santa Maria del Fiore Cathedral (the largest building in medieval Europe), Giotti’s Bell Tower, the Dome of Brunelleschi, bruschetta and beer, the stunning doors of the Baptistery of St John… and Marty Kelleher, at the JJ Cathedral Irish Pub. 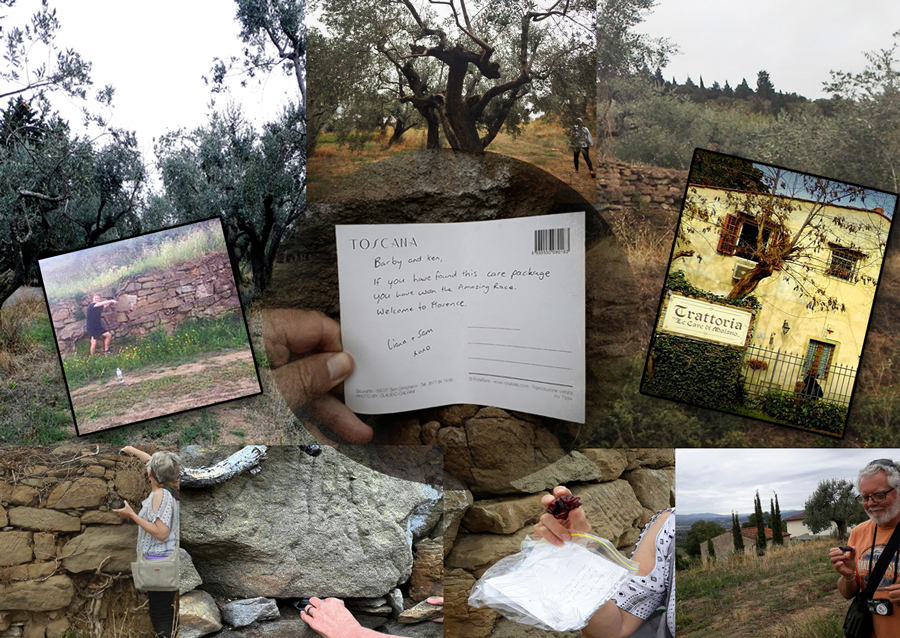 Following the clues, hunting for and finding the “treasure” Sam and Liana had hidden for us several months before in an olive grove opposite the Cave di Maiano, a trattoria in the hills near Florence. 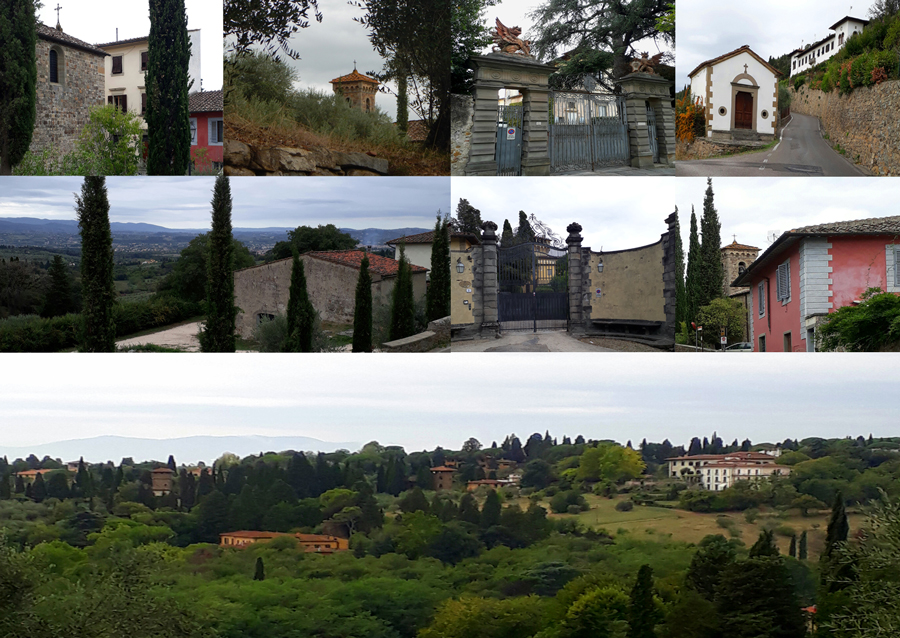 Tuscan architecture and views of the surrounding countryside on our walk back from Maiano to the city.