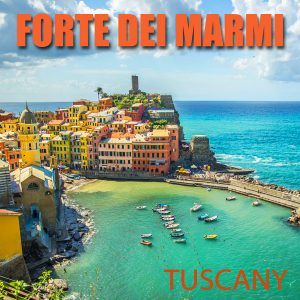 I fell in love with the Cinque Terre via a jigsaw puzzle. Trying to recreate the picturesque image on the box lid many years ago, I was fascinated by the fishing boats in the tiny marina and hodgepodge of colourful houses and vineyards clinging to the terraces and cliffs overlooking the Ligurian Sea. Brian had been there (naturally) and said I had to see it as no picture could really do it justice, so nominated “any of those five towns” for his list. None fit the remaining letters so we made ‘F’ Forte dei Marmi, which was fairly close by.

Except not really. On the map it looks just down the road but it’s actually 76km away in another province, still part of the Italian Riviera, but not the Cinque Terre. It’s one of the most popular (and expensive) holiday destinations in Italy, but Forte dei Marmi lacks the messy-rustic charm of Riomaggiore, Manorola, Corniglia, Montorosso al Mare, and especially Vernazza. The day Ken and I went to Vernazza and I gazed down at the village from Castle Doria’s Belforte tower, my jigsaw came alive.

Our Forte dei Marmi hosts advised that there was less to see locally than in nearby Pietrasanta but we still wanted to explore the town before travelling back to Florence. No time to visit its eponymous ‘Fort of Marbles’ but with marble statues, roads and footpaths lined with marble and massive blocks of it alongside the train tracks, we couldn’t miss the significance of the beautiful white and blue-grey Carrara stone to the area’s culture and history. It colours the majestic backdrop of the Apuan Alps where, in 1530, Michelangelo had a road built up to Monte Altissimo to access the Cervaiole quarry for his sculpting materials.

We rode pushbikes from the B & B to the pier… well ok, Ken leisurely cycled while I wobble-crash-cursed-repeat then gave up and walked my wheels the rest of the way. Though this wasn’t the Italy we were after, the villa-lined streets and wide boulevard along the beachfront were pretty. Some late-season surfers were out off the beach pier-side but you can’t freely walk that 10km stretch of sand… most of it’s divided into a hundred or so private beaches, owned by families and off-limits to the general public – or available to rent for a hefty price. Such elitism would not have sat well with our Brian’s egalitarian ideals but still I despatched him from the sunny Pontile in another of his many seaside drops.

Next day we trained it up to La Spezia then changed for Monterosso, the furthest of the five towns, intending to explore it and then Vernazza on the way back. The weather was crappy and the stations were packed but there was a lively camaraderie on board, and as we chugged through the first two stops we chatted with some fellow passengers who, coincidentally, were thinking of moving to our local area. The train was delayed at Corniglia and it seemed crazy that this was due to overcrowding at Vernazza… until we finally pulled into that station and saw the mob on the platform. Plan B: scrap Monterosso and take our chances here. Even if Ken’s foot had been hike-worthy the famous Sentiero Azzurro cliffside trail that links the villages was still wrecked in places after the 2011 mudslides, so we might not have been able to walk it anyway. It didn’t seem like the disaster had hurt tourism any (a cruise ship docked at Livorno puffed out the numbers considerably) but the noisy jumble of bodies and languages just added more colour to the experience.

It was a narrow and steep climb to the castle’s bastion but Ken managed, though he opted to forgo the tower. Clever boy – it was tight and dark and totally airless going up the spiral steps and when someone wanted to come down, we all had to squish against the wall to let them pass. The funk of garlic and armpits was powerful in the confined space and by the time we popped out at the top we were grateful for the fresh breeze. And the view – 360° of pure spectacular, with a panorama up and down that rugged coast.

I waved down at Ken and he snapped a few photos of me scattering some ashes… but was on the wrong side for a shot of the blowback that landed a light dusting of them on to the shoulder of a woman standing near me. She wasn’t impressed and when I apologised and explained what it was, her annoyance turned to horror and she started madly crossing herself. I went to brush them off but she shook her head and moved away, particles of Brian still sitting there like an unholy case of dandruff. Obviously superstitious and probably religious, the unfortunate woman no doubt sought out a priest to exorcise her jacket and remove any lingering curses.

I just hope the procedure goes easy on my boy. 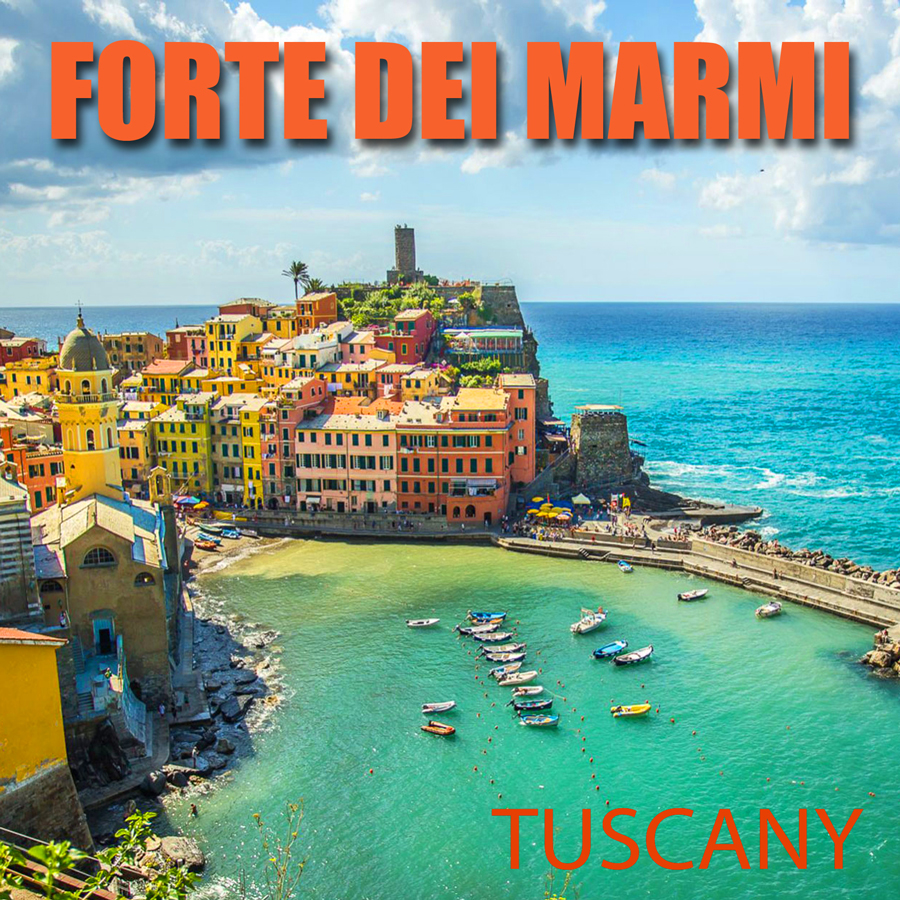 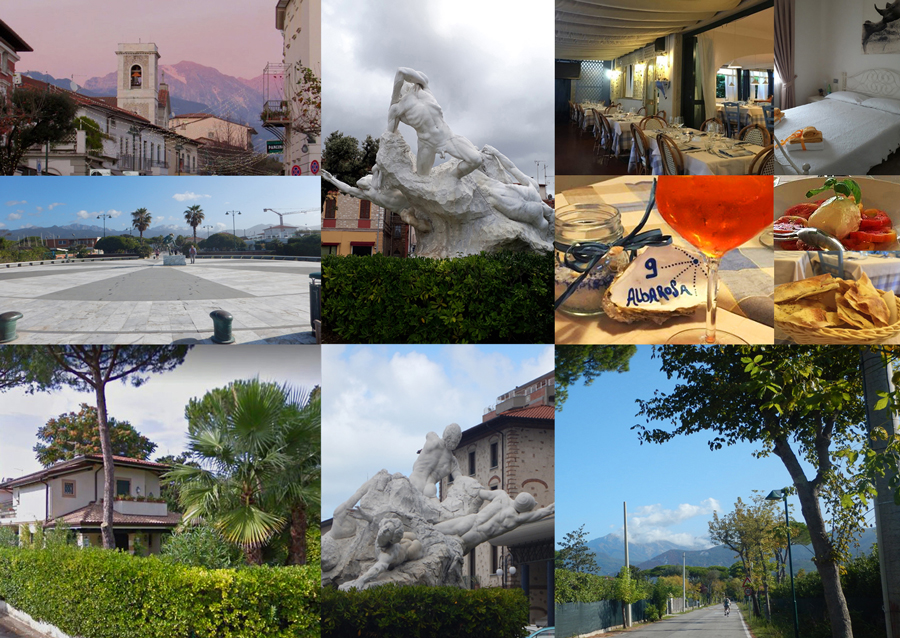 The Apuan Alps that tower in the background of Forte dei Marmi have been a rich source of marble for hundreds of years; the English Haven B&B (bottom left) provided a very comfortable base for exploring this part of north western Tuscany; our appreciation of authentic Italian cuisine was taken up a notch at the Ristorante Albarosa; cruising along the lanes from the beachfront, after I found my cycling mojo. 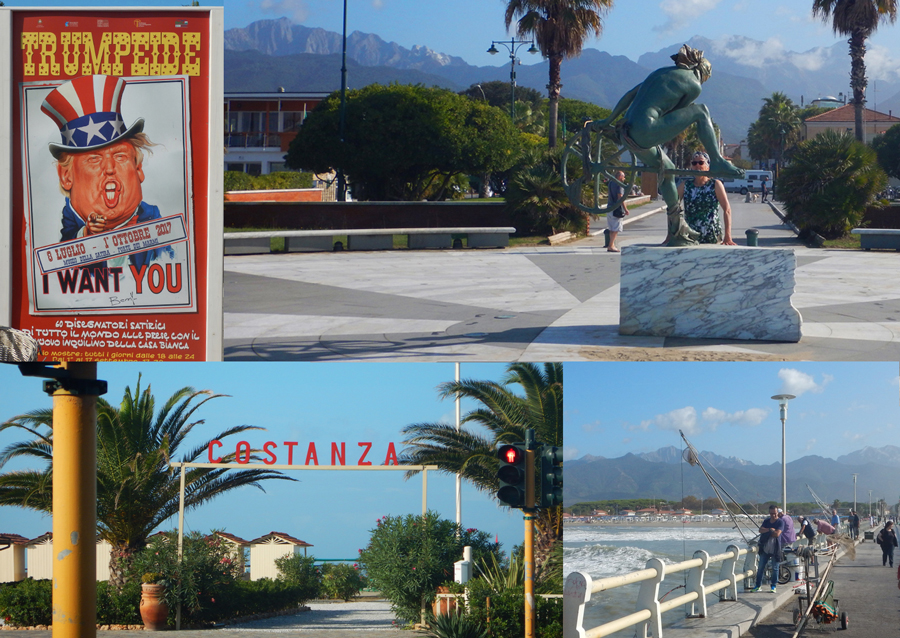 Unfortunately we found out about the ‘Trumpeide: A Pencil against Power’ exhibition at Forte dei Marmi’s Museum of Satire too late to check it out; sculpture of Ulysses on the pier promenade; beach space is at a premium in the summer months and it’s not cheap to hire a sunlounge on one of the privately owned sections like Costanza’s; fishing off the pier is serious business. 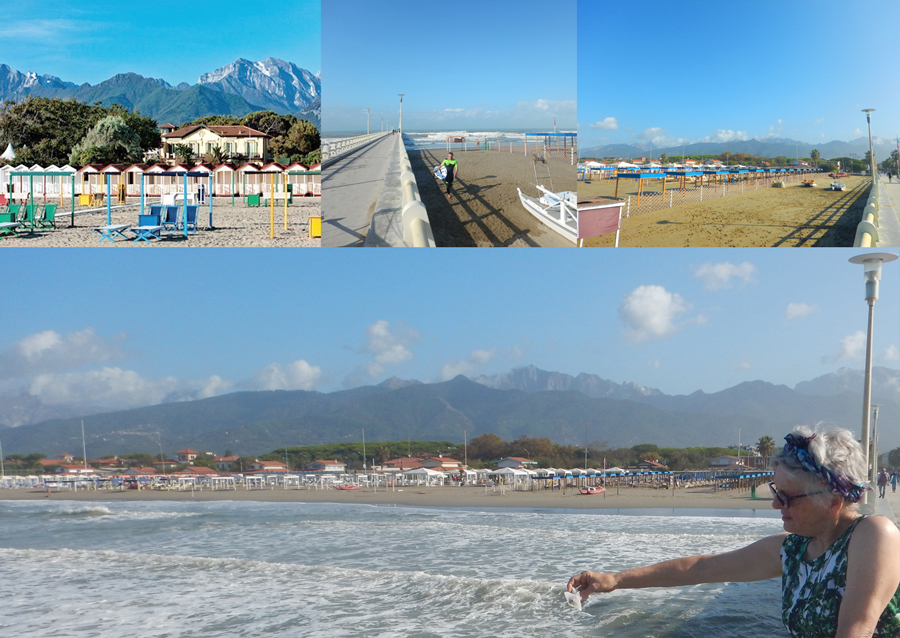 Visiting in the shoulder season is a good way to avoid big crowds and we were lucky to cop warm weather as well for Brian's ash drop off the pier. 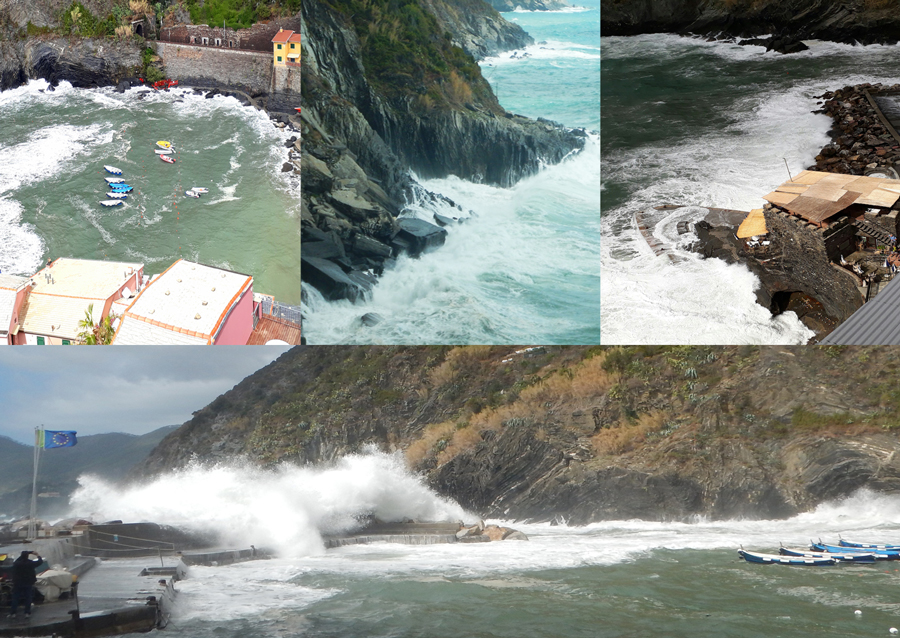 Vernazza's weather had been a different story – dull clouds, and that crashing sea was not the gentle blue I expected. 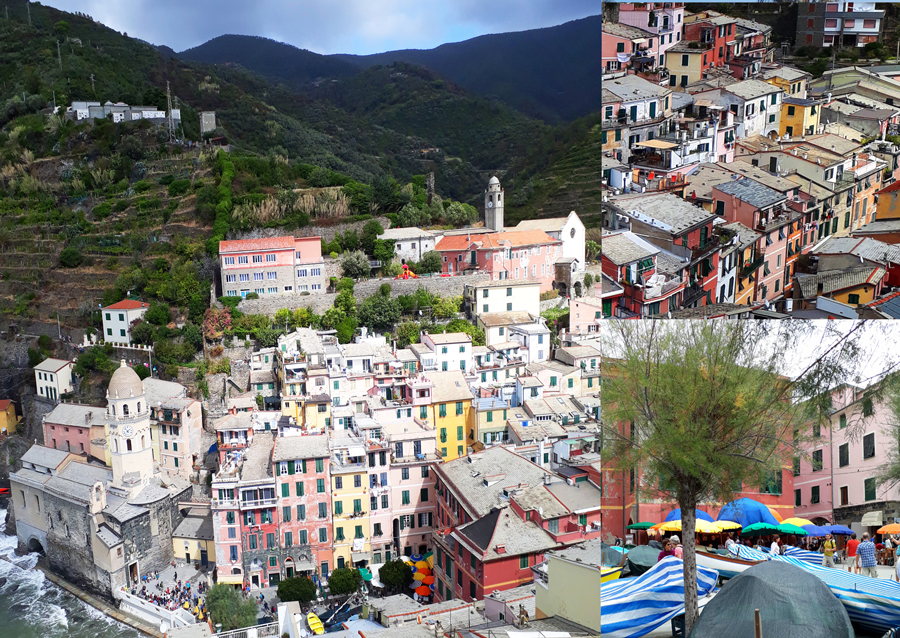 The splashes of colour in the town – and no cars or signs of corporate development – make for a charming picture. 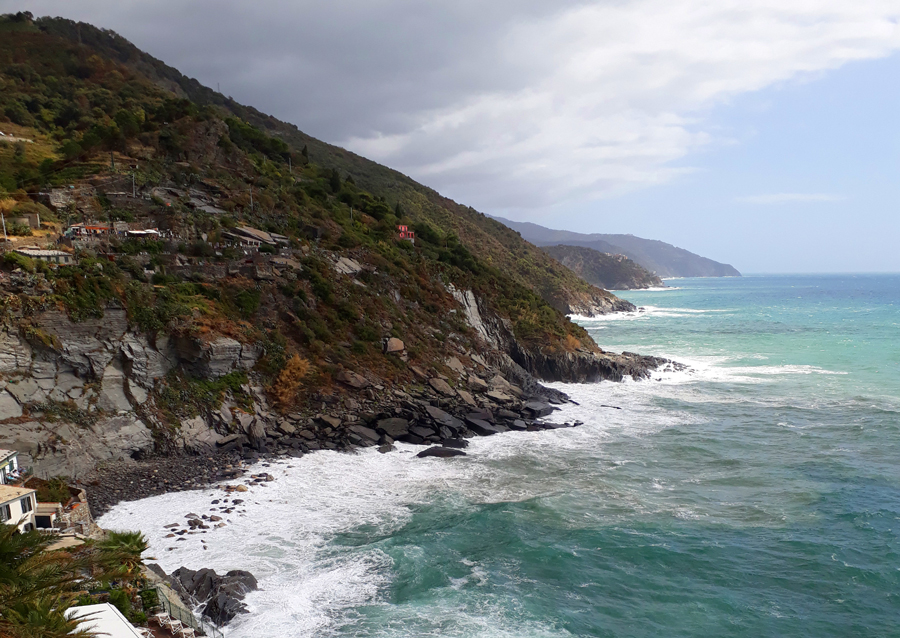 Towards the south from the Belforte Tower, along that scenic coast to the bays that shelter Corniglia, Manorola and Riomaggiori. 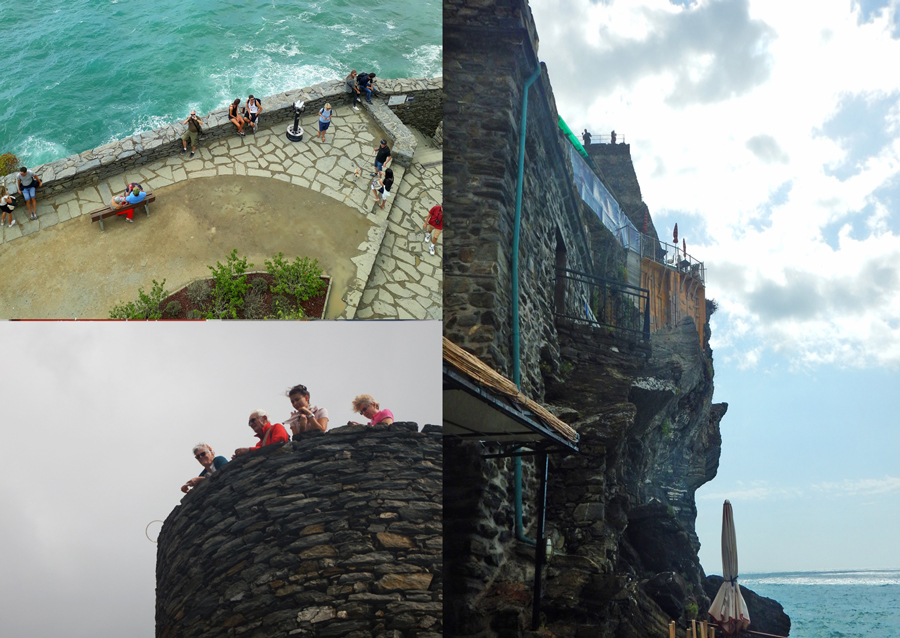 Looking down at Castle Doria’s Belforte Bastion from the tower, photographing Ken photographing me; the steep steps up the cliff to the castle (we took the less precarious route that wove up among the houses and cafés and curio shops). 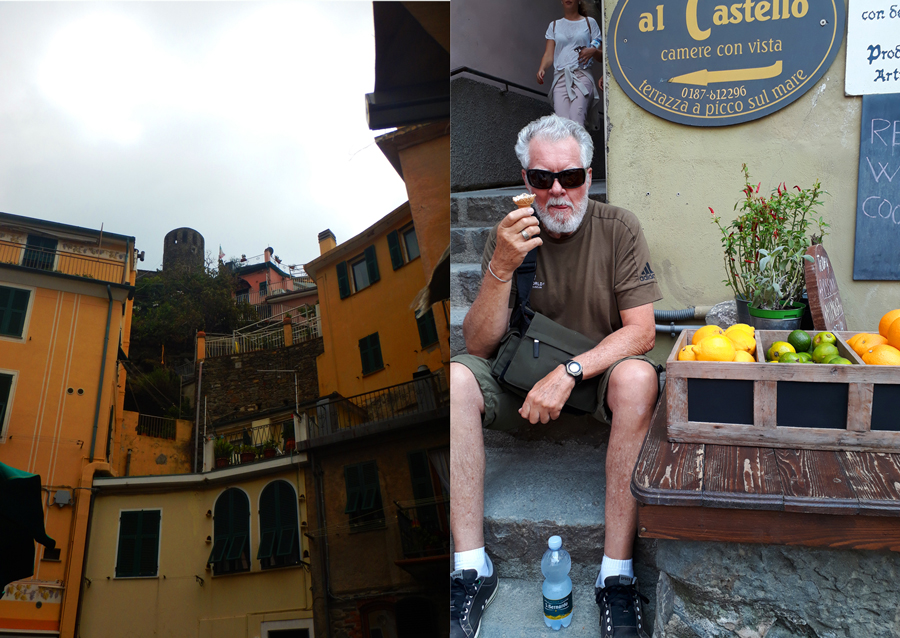 A vertical view up to the castle; Ken earned that gelato after dragging his (only mildly medicated) foot up the steep and winding steps. 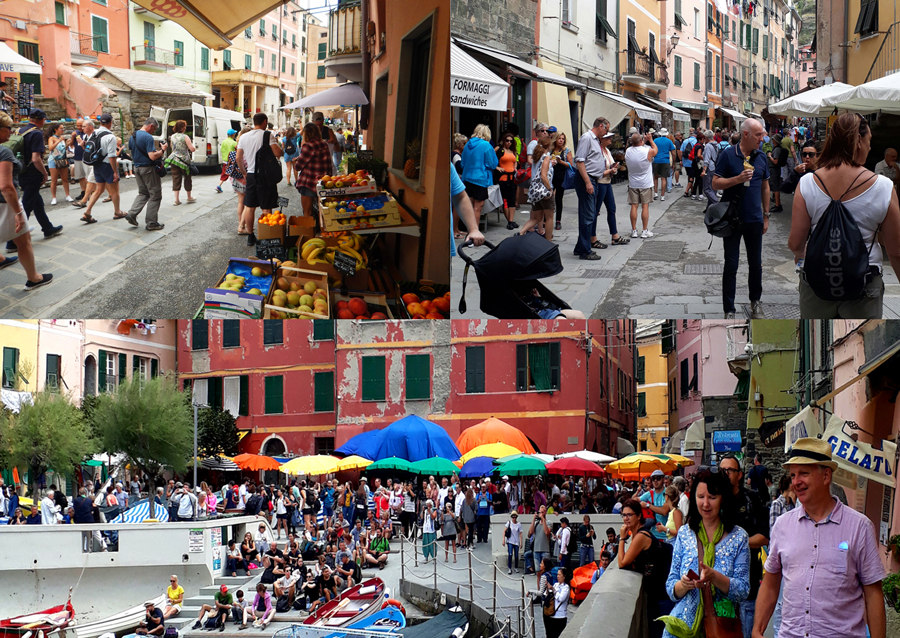 People watching in Vernazza is a crazy, colourful and very continental experience. 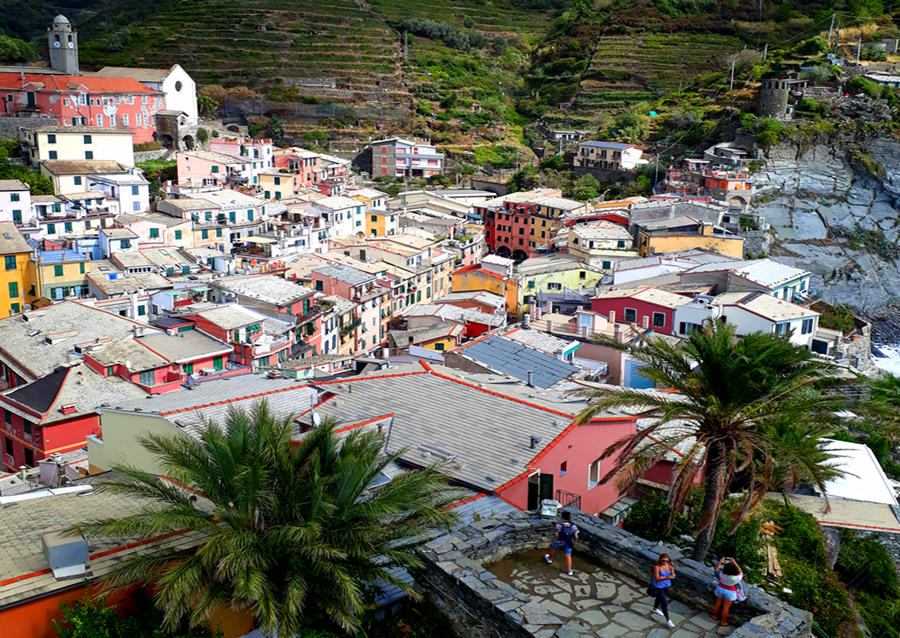 Another view of the town, looking east towards another castle (that I can’t find the name of) on the track to Corniglia.