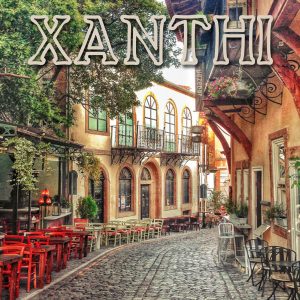 In Greece a savvy traveller learns to: 1. order only one meal between two (you can pig till you explode and still have leftovers); 2. call a woman Maria if you forget her name – odds are you’ll be right; and 3. not look out taxi windows – it’s easier to just not know. Trust that your driver can defy physics, hurtling the fattest car down the skinniest alley, and that any oncoming vehicles will likely miss you anyway.

We loved it all… the psycho parking, the people, the history and the Ouzo. After Santorini, Athens and Thessaloniki – places Brian dreamed of visiting – to finally arrive in his chosen X should have been a real pop the cork moment for Barbie and Ken. But when the bus deposited us in Xanthi’s rundown terminal, empty except for a few loitering faces, smashed windows and some angry graffiti, our enthusiasm took a hit. Even in daylight it did not have a good feel and despite our minimal luggage and only a couple of blocks walk to our studio rental, we wussed out and took a cab.

Accommodation so far had been excellent and as guests we’d played to rave reviews on airbnb.com. Ken could make friends with anyone and as long as a space was safe and vermin didn’t party in our presence, nothing fazed our low-maintenance demands. Xanthi though… the place was fairly clean and the ominous metal security shutters probably didn’t mean anything, but the ‘beds’ were slippery vinyl divans with just a couple of sheets and loved-to-death pillows, and the one cup, one spoon and two forks – and, oddly, enough paper towels to dry off the Titanic – were not exactly the “fully equipped” the promo promised. Still, none of this was a deal-breaker as long as we got a good night’s sleep. There was a bar fridge and cinematic sized tv but the fact I couldn’t even knock up a cup of tea provoked an immediate craving for one. We ventured out to forage an early dinner and supplies for a cold breakfast, and to not get mugged.

What a difference a bit of time and a couple of streets make. We’d apparently arrived during Mesimeri, ‘the hours of common quiet’, and now that siesta was over it was a whole other town. Only a block away was the start of the retail precinct with endless eateries and markets and the usual collection of shops selling enormous watches, flashy shoes (Greeks love their shoes) and bakeries that could baklava you into a diabetic coma. Everyone we met was cheery and helpful and we parked on the barstools at Fratelli’s window to people-watch and map out the following day over dinner. By the time we got back to our squeaky divans we’d redefined Xanthi, dodgy first impression aside, as authentic and very ash-worthy.

As long as we got a good sleep. A simple requirement, but not to be. Unwilling to go another night chasing our pancake pillows around the vinyl we checked into the nearby hotel Xanthippion, where the beds were inviting and the tariff included a hearty breakfast – and tea. No BBC on a big screen… but also no black curly tuft (oh please be chest hair) like the one I side-stepped in the shower the night before. Our host was dismayed we were leaving early and asked what he could do to make it better, and to please not give it a bad review. Cue Barb’s mothering instinct – he was young and seemed genuine and I didn’t want to crush his entrepreneurial aspirations, so told him I’d focus on the positives as long as he agreed either to revise his promo, or turn fully equipped into a reality. Still not sure if I helped him, or if I was totally conned.

Exploring the Old Town and visiting the Folk Museum, we learned lots about the region’s ethnic conflicts and early tobacco economy. Xanthi is a cultural mix of Bulgarian, Turkish and Armenian influences, with delicious food, bouzouki buskers, and a colourful bazaar that runs for streets. Ken came away with one of those big watches he’d so coveted but for now we held off on the souvenir buying and stuck to our carry-on backpacks and a tote bag. We each had a 23kg check-through allowance we hadn’t used but still to come was the port town of Kavala, a week on the island of Lemnos, another night in Thessaloniki and a few days in Athens. There was plenty of time to do the shopping thing and so far there had been many situations where we were glad we had chosen to travel light.

In front of the Amaltheia Taverna a neat little barrel beckoned for a bit of Brian. In through the bunghole he disappeared but he wasn’t finished with Greece yet. He had already been deposited into a live volcano on Nea Kameni, in Thessaloniki’s White Tower and into the Aegean near the Alexander the Great monument. He would also make his mark at the Parthenon, as well as Myrina and Kavala castles (see Random Drops for those stories). 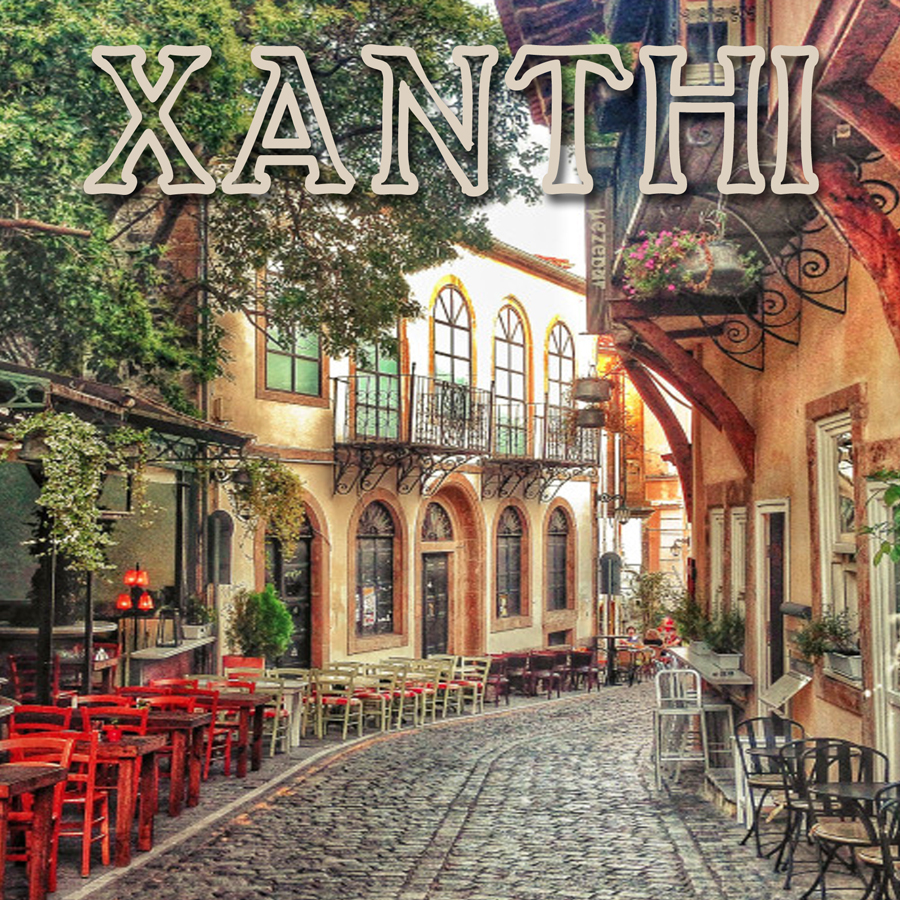 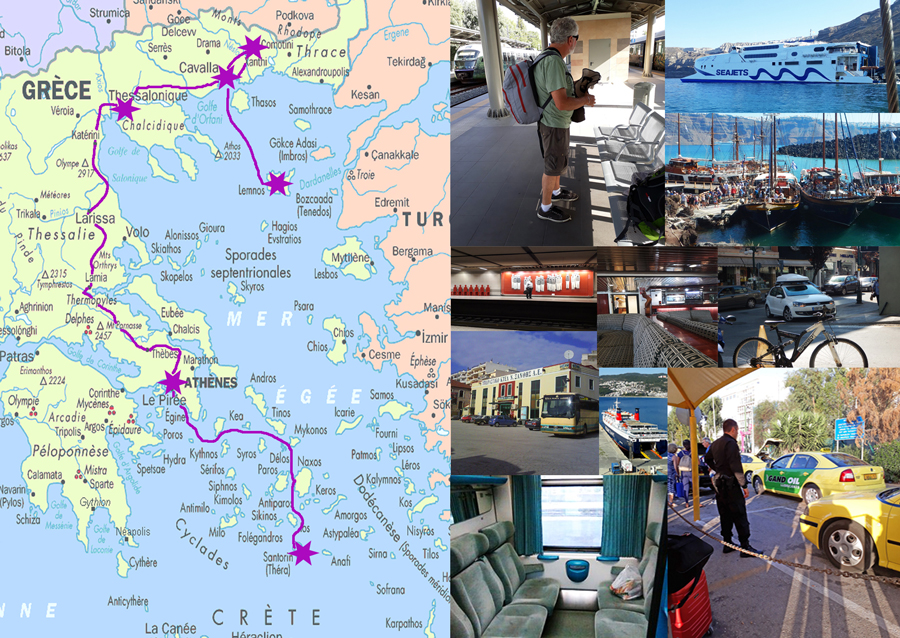 Phantom bus timetables, armed guards at cab ranks, a Eurail pass that didn’t match reality... getting around Greece was always an adventure. With the help of some very obliging locals though we managed to find our way to where ever we wanted to go and every time we completed a successful journey we felt so chuffed you’d think we’d split the atom. The trains and ferries were comfortable and very reasonably priced too. 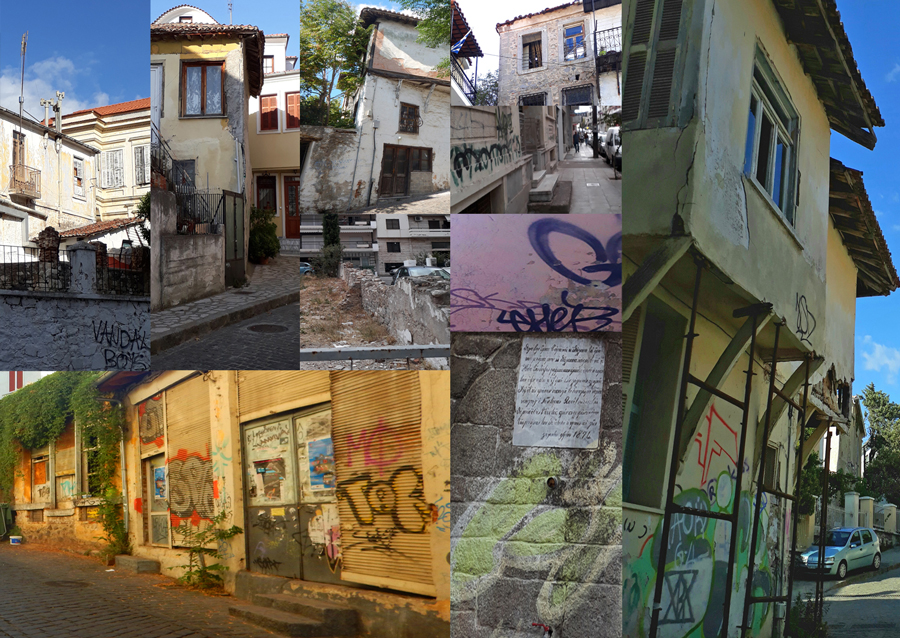 Xanthi looks a little worse for wear but after exploring it and learning its eclectic history we could ignore the graffiti and run-down buildings and appreciate its quirky character. 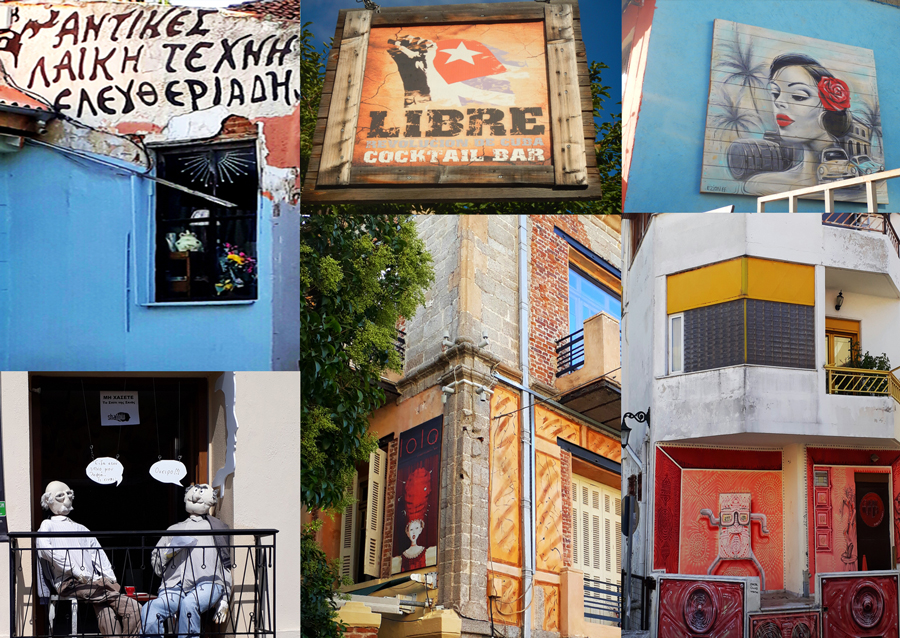 Its informal street art and interesting facades made for a colourful journey through the backstreets of the town centre. 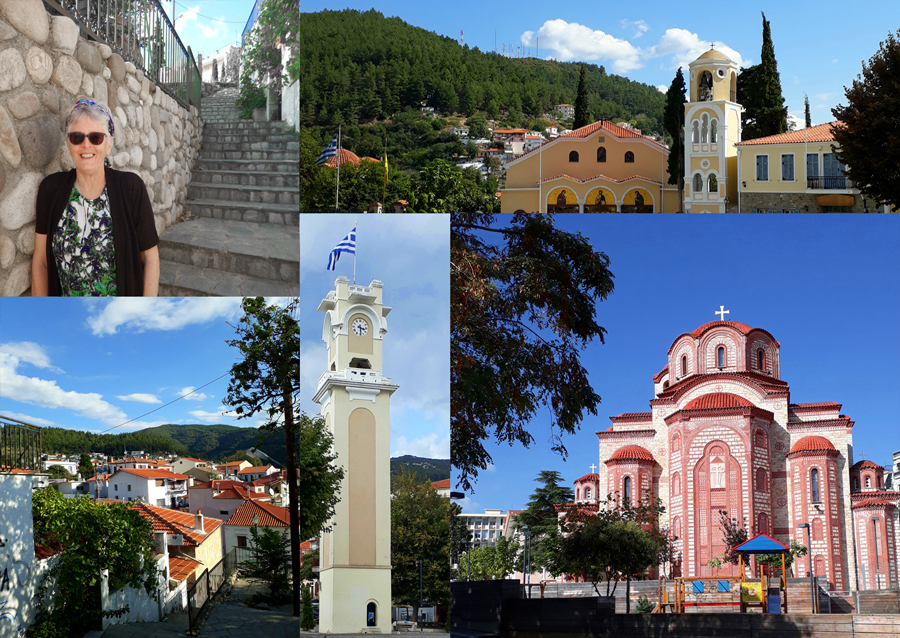 Lots of negotiating cobblestones and climbing stairs through unmarked streets gets you nice and lost in Xanthi; the Rhodope Mountains that run north to the Bulgarian border rise above Republic Square, the town clock and the church of Agia Sofia; looking west over the town. 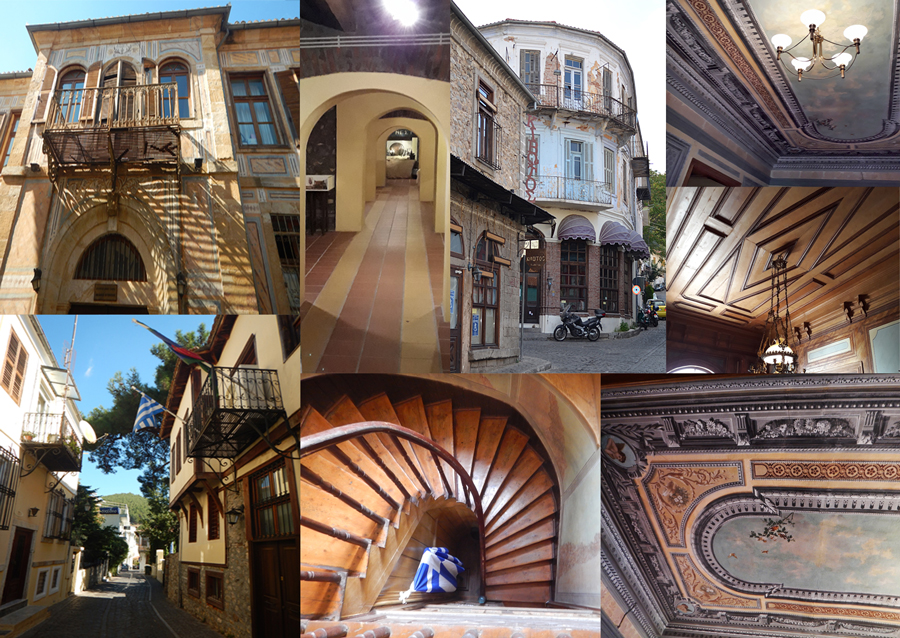 The architecture and its diverse influences continued to fascinate… 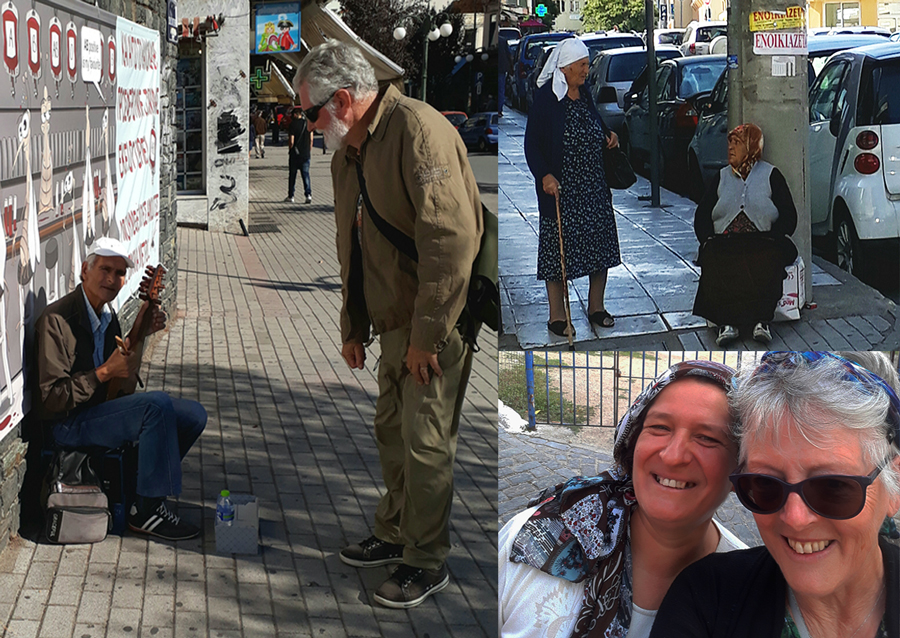 …as did the people, like buskers who provided an authentic soundtrack to our wanderings, locals who couldn’t speak English except for a jolly “Selfie! Selfie!” (must be a universal word) and the little old lady who sat each day on a crate opposite Fratelli’s – not begging or selling, just observing life. 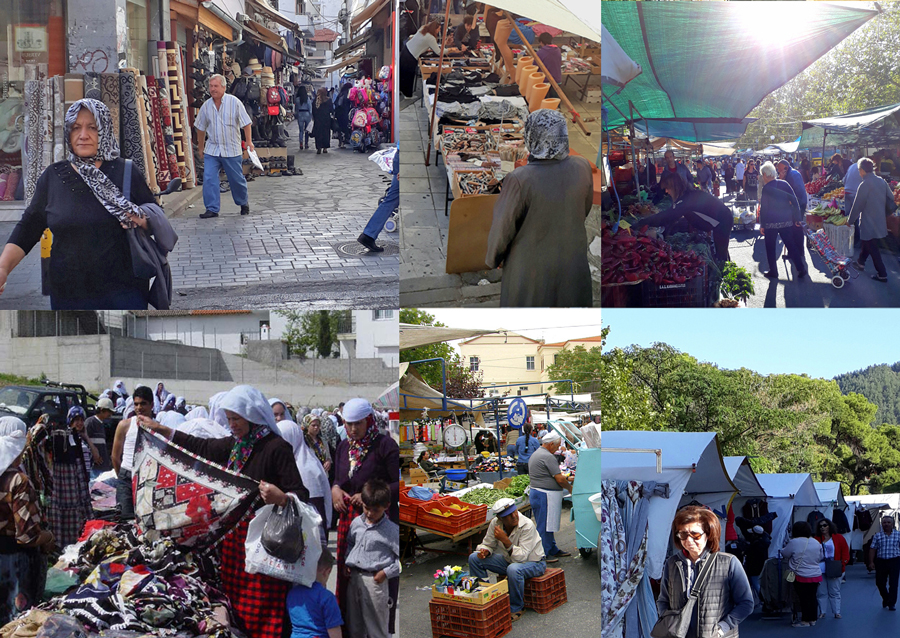 The daily markets and weekly bazaar were chocka with bargains but we only bought in moderation, saving ourselves like retail virgins for the goodies to come on Lemnos and our other upcoming destinations. 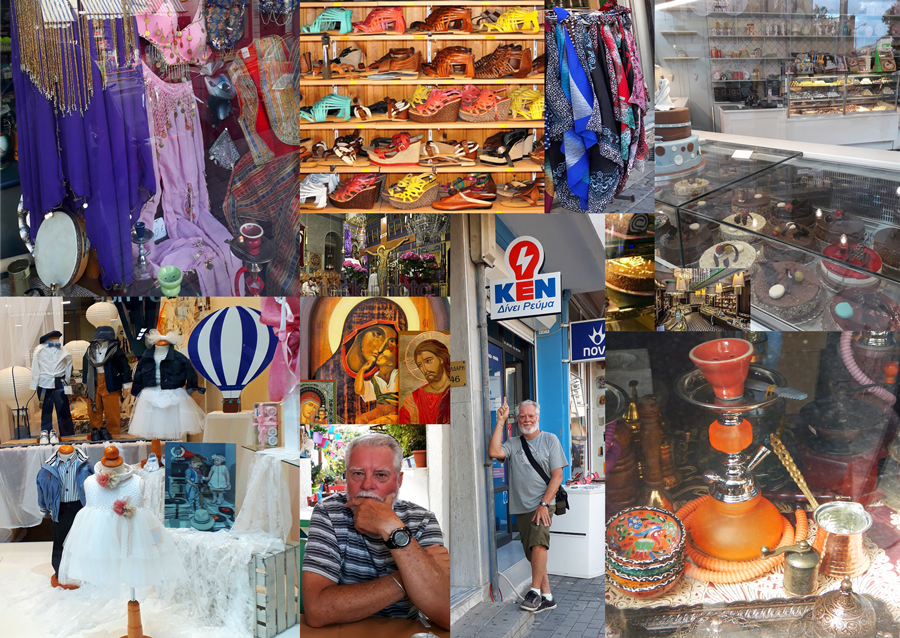 The shops in Xanthi sold pretty much the same as they did in Thessaloniki – shoes, jewellery, cakes, belly dancing outfits, religious icons, hookas, and mini-me formal wear for children of all ages (a silk baby bow-tie and vest with a fob chain for the dummy/pacifier?), and the big watch that stole Ken’s heart. 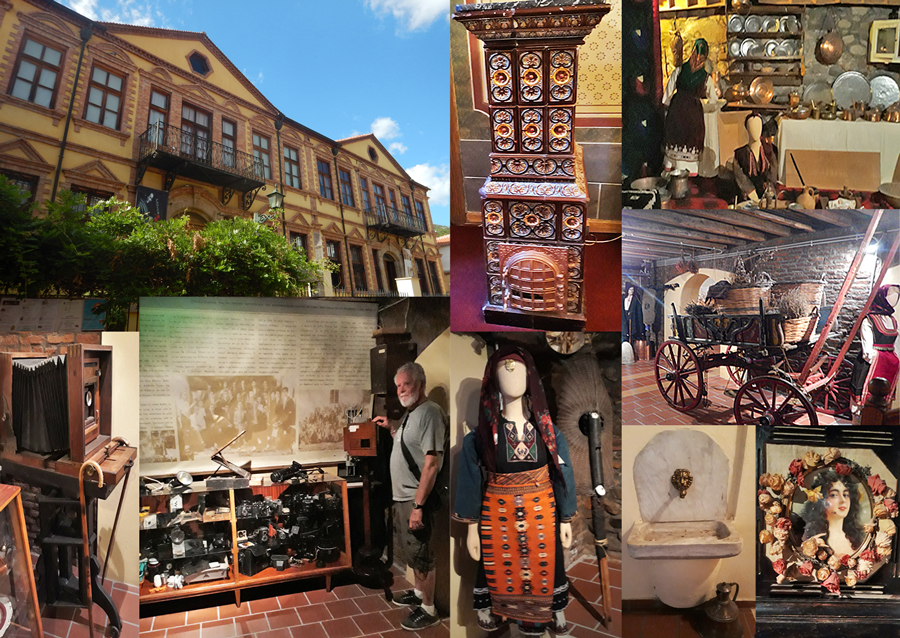 After our heated battle to find The Folk Museum (Just. Ask. Directions.) we were most impressed with its wealth of exhibits on the region’s development and culture. While I was immersing myself in the symbolism of the intricate patterns on traditional costumes and furniture (I see potential mosaic designs everywhere) Ken found his heaven in the vintage tools and machinery, and especially the photography equipment. 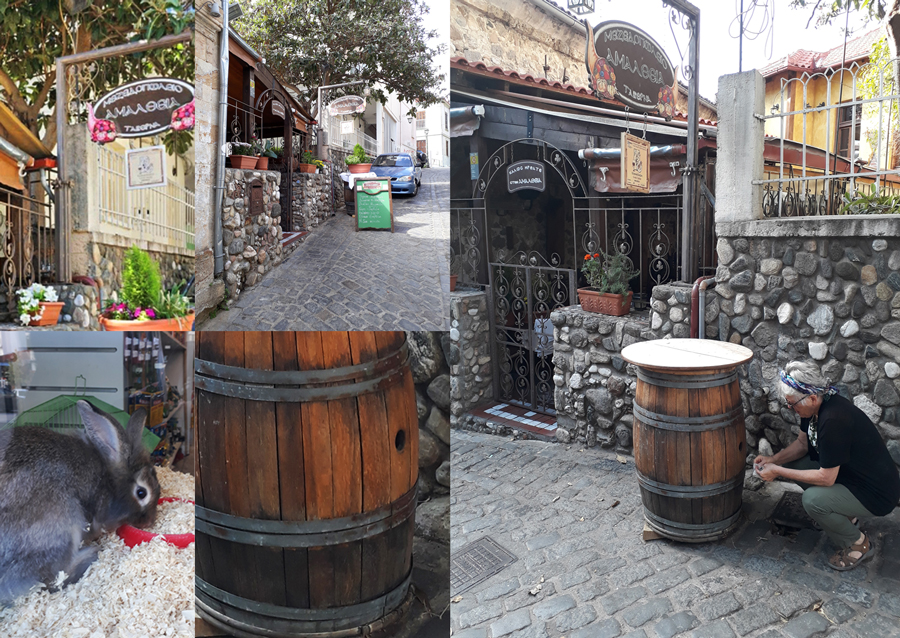 Apart from the image of a leaping hare on a few ancient drachmas, rabbits don’t feature much in Greece except as cooking ingredients. But we found our bunny sighting in this cute little one in a pet shop window – hopefully destined for a good home and not a Kouneli stew. It complemented the ash drop/cram into a wine barrel outside the Amaltheia Taverna, in the heart of the Old Town.