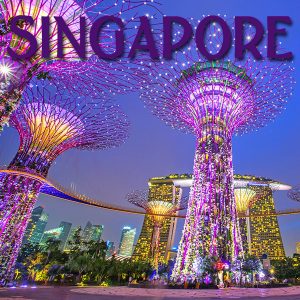 “I can’t believe you’ve never been to Singapore,” Brian used to say, like everyone who’s anyone has dropped in there at least once. It wasn’t a place that had ever occurred to my wish list of destinations but his cavalier mentions of ‘Singapore Slinging at Raffles’ demanded I amend this oversight. This would be my first trip overseas with Ken and even though he too had been there before (I must have missed the memo on this apparent rite of passage) we decided The Lion City would be a good stopover to break the long flight to Europe.

With only two nights and one full day there we didn’t have much opportunity to sightsee, other than find our way to that iconic old hotel so I could see what all the fuss was about. Ken’s 1980 visit had included Raffles famed Long Bar but the city must have changed a bit since then… though he was unquestionably certain that Raffles Place train station was the nearest to where we needed to go, it wasn’t. But the confusion with names was understandable.

As the holiday progressed I learned that his cast-iron confidence with directions was based on nothing more than being a bloke. It wasn’t an unfamiliar syndrome – I had often threatened to buy Brian a t-shirt that said I’M NOT SURE…, as these were three words he was allergic to admitting. Just cut to the chase and ask someone, I’d mutter, but apparently it’s better to sniff the wind, mask your disorientation with an authoritative “It’s this way”, then stride off in the hope that you end up being right. I just don’t get it.

This time however pragmatism took charge and he agreed to consult a local. Route confirmed and manhood restored, we walked the 1.5km from downtown rather than take the MRT again, but it wasn’t our smartest move. The travel brolly had been a victim of my brutal luggage cull and halfway there the light rain turned mean, there were unexpected detours around roads that were cordoned off for an upcoming F1 race, and the map was not altogether in English. The real challenge though was Ken’s badly burned foot from a recent camping accident. His injury was seriously painful but though I assured him cabs were always an option, he determined to soldier on. That stubborn resolve would be severely tested later by hills and cobblestones in Italy and Greece but even then he continued to give it his best.

We finally found the majestic old girl in the heart of the civic district, sitting defiantly among mundane urban buildings. Her classic colonial revival architecture and fittings do indeed “epitomise the romance of the Far East”, even with a neighbouring apartment building peering down over the Palm Garden and white marble colonnades that line the courtyard. After a momentary eek! at the ‘Long Bar closed for restoration’ sign we were directed to the ornate Bar and Billiard Room. We might have looked like two dunked biscuits in that regal setting but had enough Singapore dollars to ensure the perfectly polished wait staff justified the service charge on a Sling for me and a Tiger Beer for Kenny. He enjoyed his beer and we raised a toast to our dear Brian but with the bill just shy of S$60, you better believe I compensated for my watery overpriced cocktail by pocketing as many of the complimentary monkey nuts as I could carry.

We’d already scoped out the garden area for a suitable drop spot and the old iron Fountain of Dreams looked ideal. As was usual for these overseas destinations the ashes had been packed into several tiny ziplocked bags, but I’d also grouted some Brian into a couple of small metal discs just in case the bags were confiscated by Customs. That has never happened and he always scans through Security without incidence (I don’t need to declare him but make sure to carry the Death Certificate and a letter from the crematorium to explain that gritty grey powder) but even though I’m not breaking any laws, the warnings about Singapore’s strict conservatism and rules had me imagining Midnight Express. Again he passed through the x-ray easily and one of those discs now rests in Raffles fountain among the submerged coins other visitors have dropped in for luck.

Turns out Brian was right and I really did like Singapore. No rabbit sighting but another drop ticked off the list – and a brief but revealing first test in the Barbie and Ken Go Travelling experiment. 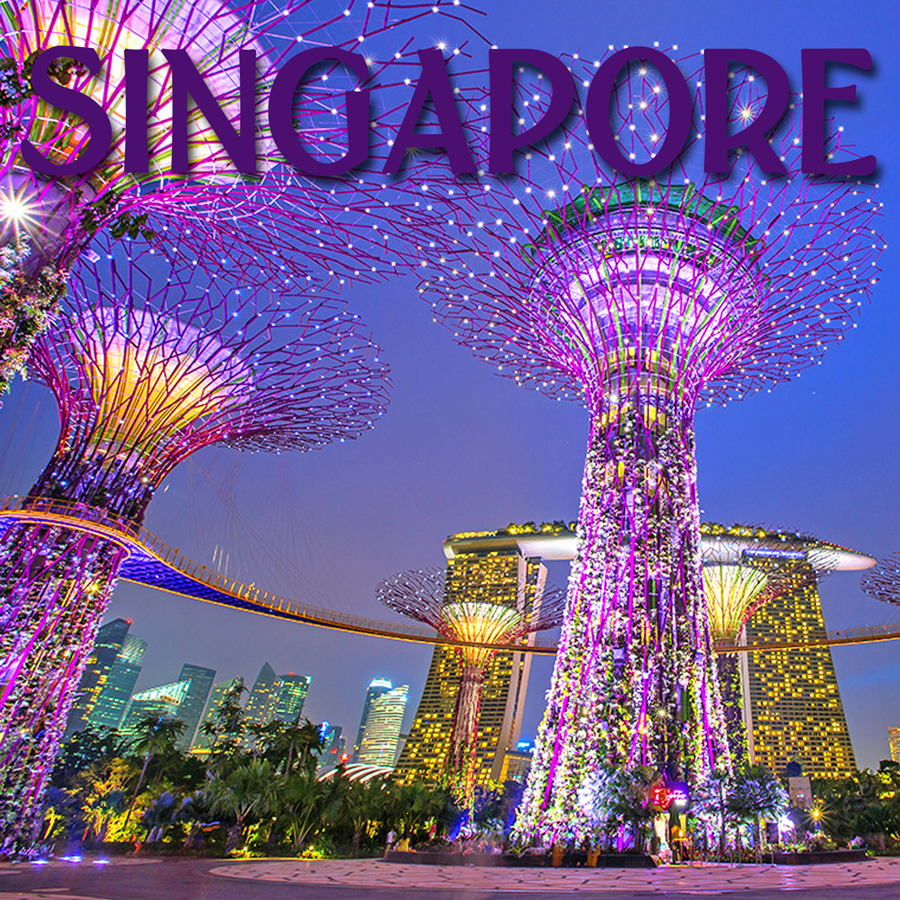 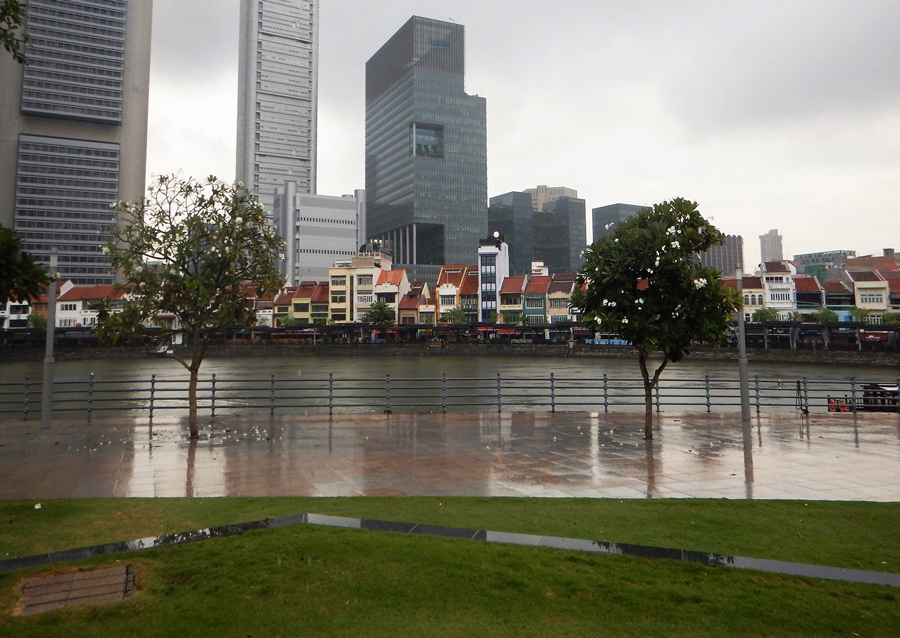 Singapore – always neat, but a city of contrasts. 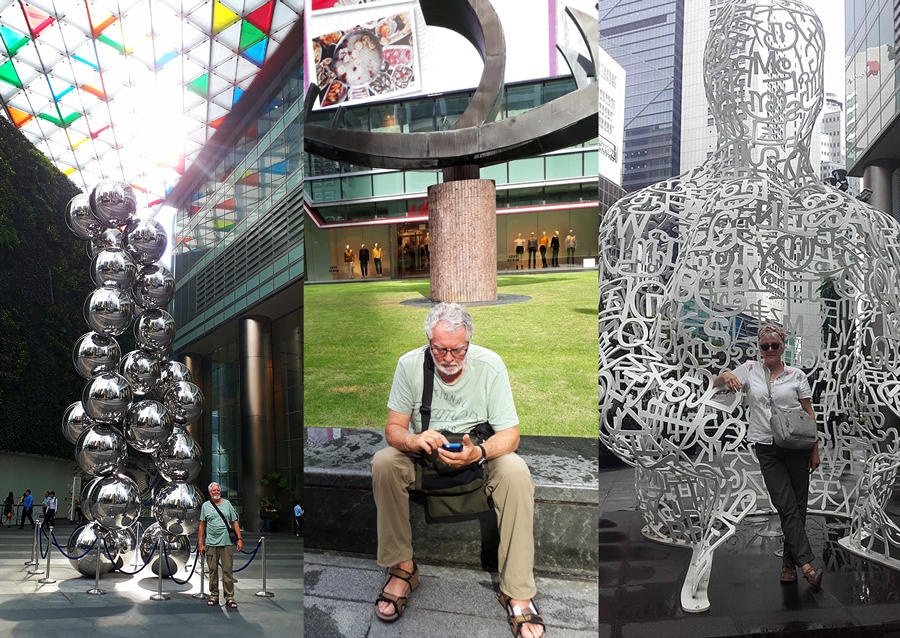 Around Raffles Place – nowhere near Raffles – and Ken checking Google Maps as a last ditch attempt to find our way there without having to ask anyone. 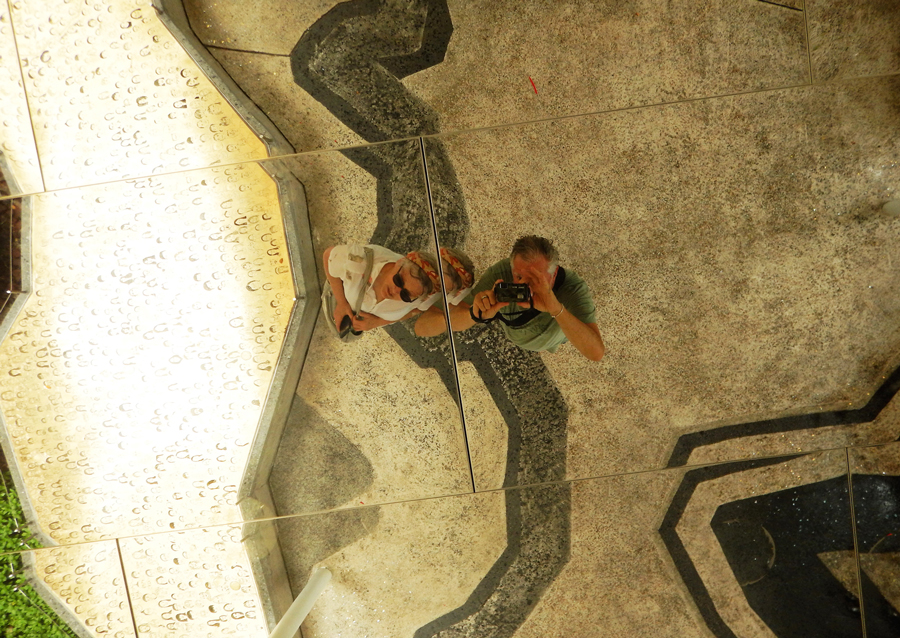 We loved the city’s quirky artwork and public spaces, especially The Art Connector. 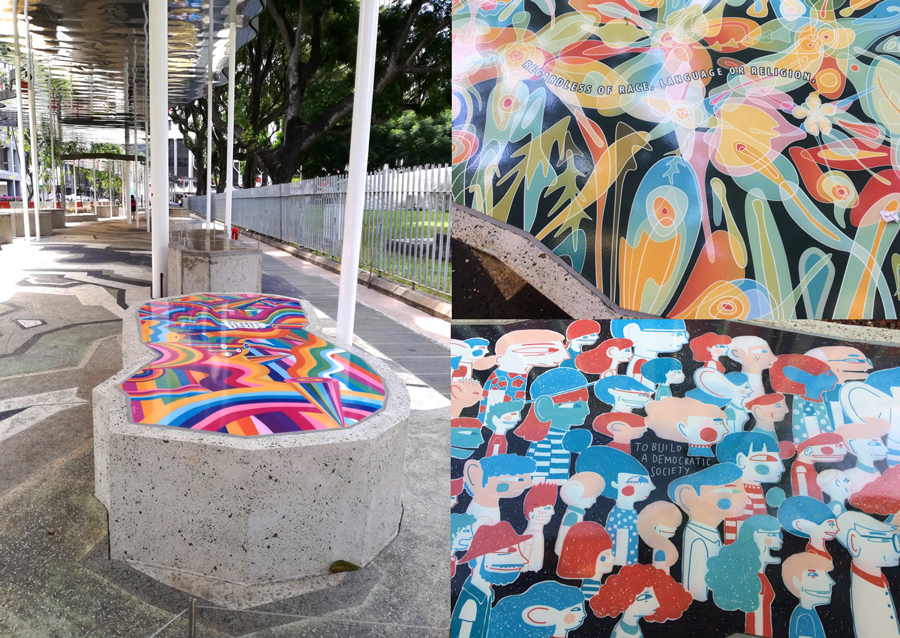 More pieces in The Art Connector, commissioned by the National Gallery and reproduced on vitreous enamel benches along Coleman St, with artwork inspired by the first phrase of Singapore’s National Pledge: Soh Ee Shaun’s ‘So As To Achieve Happiness, Prosperity and Progress for Our Nation’; Koh Hong Teng’s ‘Regardless of Race, Language or Religion’; Tan Zi Xi’s ‘To Build A Democratic Society’ 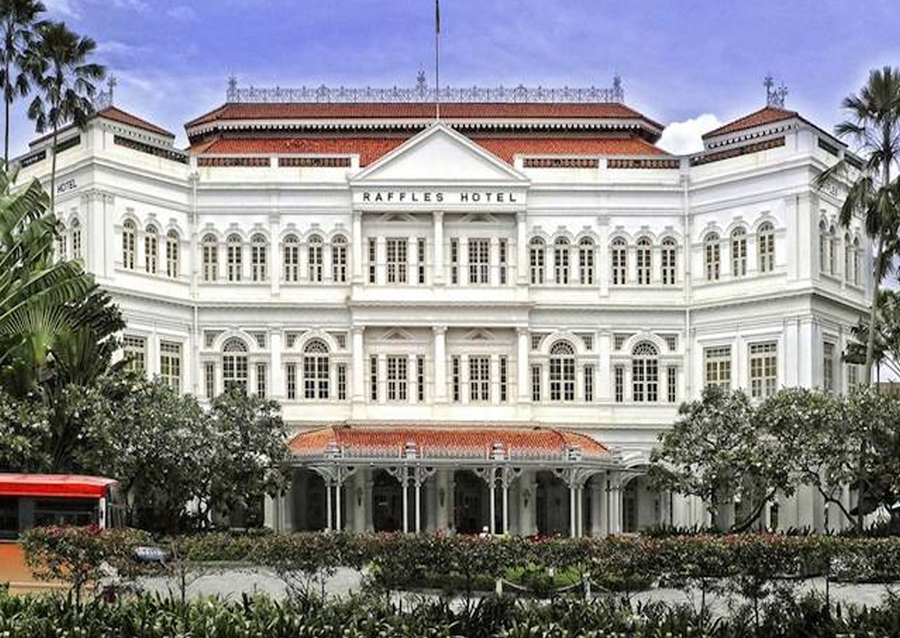 Raffles Hotel, a world-renowned heritage building and national monument, which is currently undergoing the second stage of a three phase restoration. 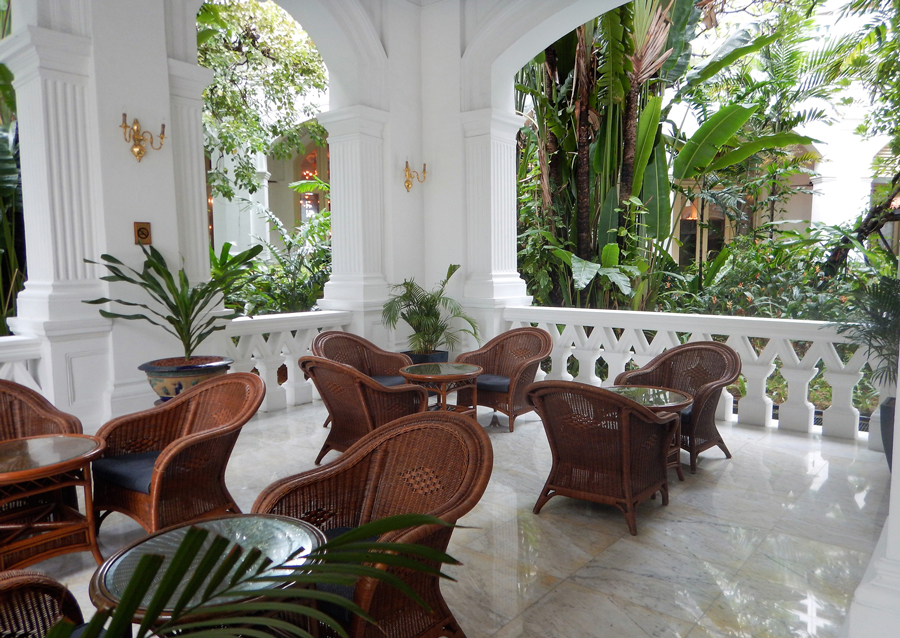 One of the polished teak and marble verandas that overlooks the landscaped tropical gardens. 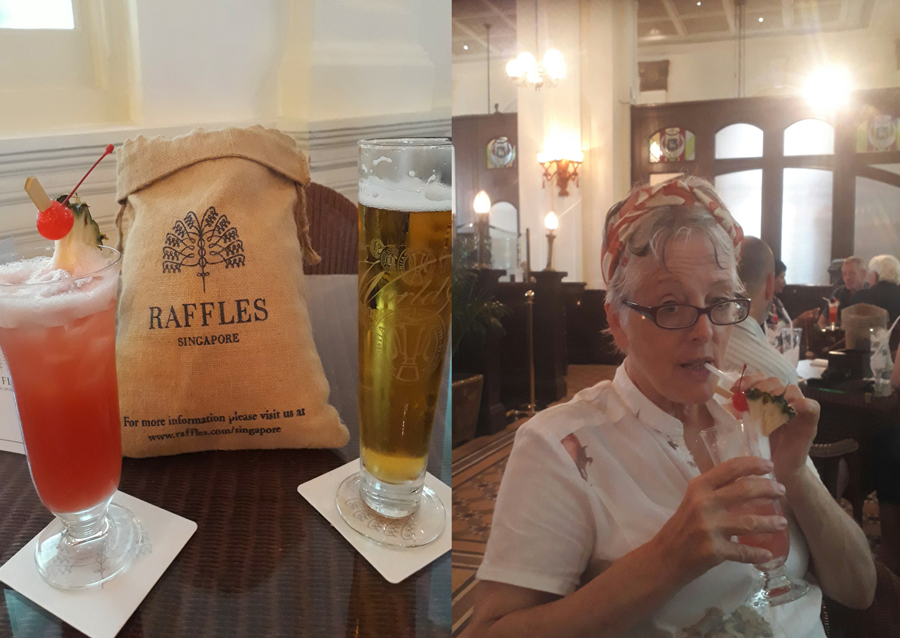 My soggy self and the Holy Grail – a Singapore Sling – with Tiger beer and the complimentary monkey nuts that almost made it worth the money. 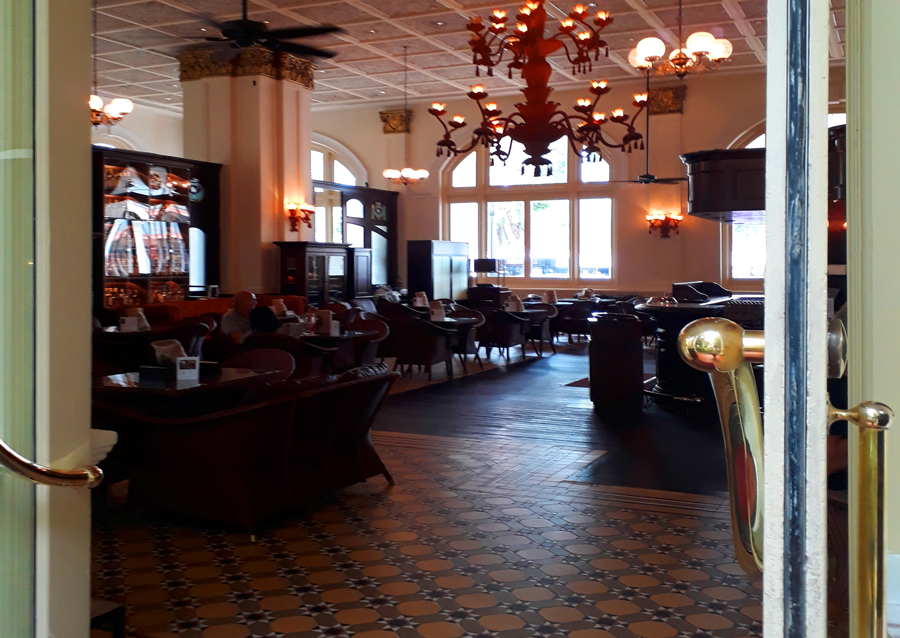 The Billiard Bar that’s currently standing in for the Long Bar where the Slings are traditionally served. 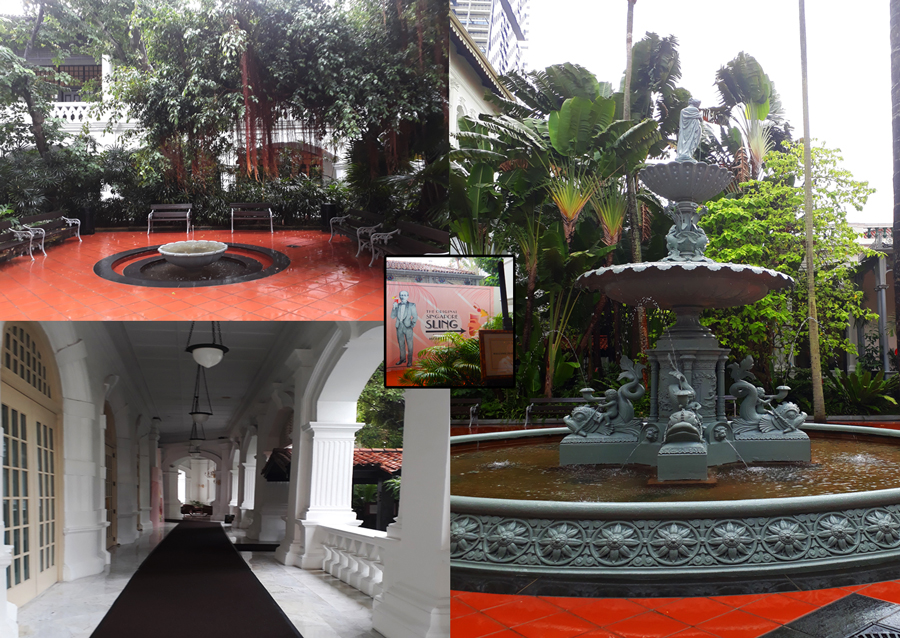 Courtyards and verandas around Raffles. 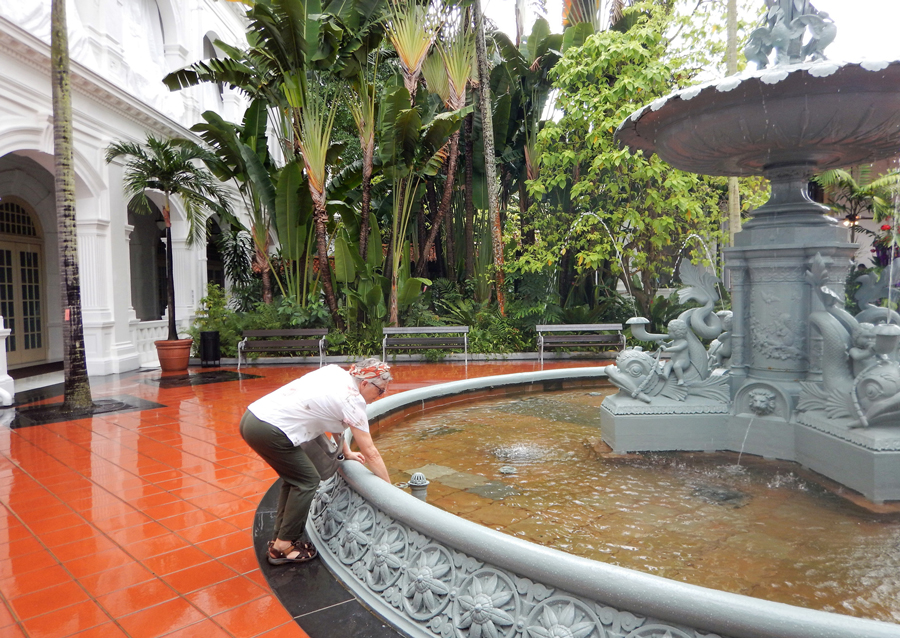 Depositing Brian in the Fountain of Dreams. 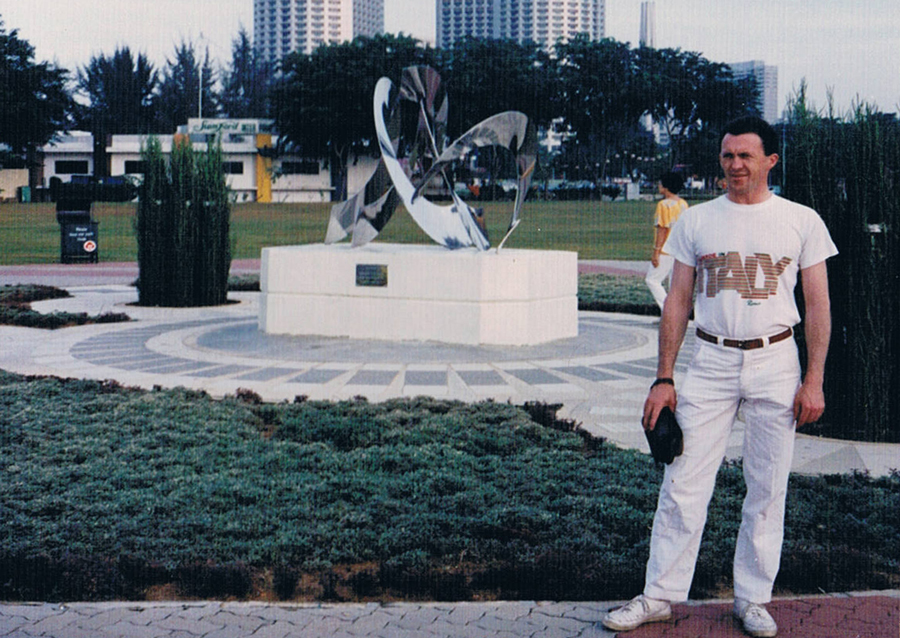 A recently located pic of Brian in Singapore, c1987.