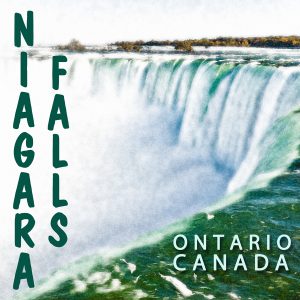 Going over Niagara Falls in a barrel… it’s a cliché but when Brian named that popular landmark as one of his favourite memories and a definite ash drop destination, there was only one way it was going to happen. ‘Lunatic,’ his look said when I first suggested it, but as we continued compiling the list the barrel idea became his own. The logistics were a little hazy but he didn’t seem to doubt its successful execution.

And it did happen – minus the preferred mode of transport. For such an integral part of the Falls’ mythology, and considering the place is chocka with cheap souvenirs, the town of Niagara is rather barrel deficient. I just needed a small one but even the gift shop at the Barrel Museum doesn’t sell them. It was left to a nasty little plastic ‘I Heart NF’ zippered-but-not-waterproof case to do the job. It would provide a very soggy ride and – organic contents aside – be no friend to the environment, but it would have to do.

Jo’s vast experience organising travel took care of the trip details and ensured we got the best deal – including a top floor room at the Marriott with magic views. We flew to Buffalo then shuttled over the border to Ontario and I suspected Brian’s preference for the Canadian side of the Falls had less to do with the country and was more about the town itself, which was way more industrial on the US side of the river.

We’d looked forward to riding the MistRider zipline at some stage and I’d imagined shaking Brian out mid zip, but it wasn’t operating while we were there. Our disappointment didn’t last long though as there were enough Falls related activities to keep us occupied. Most came with a plastic poncho – during the ‘Journey Behind The Falls’ tour and the Hornblower cruise we got quite drippy and at the IMAX Legends of Niagara 4D film we learned a little bit of history while copping some very authentic splashes and rumbles.

None came close to Brian’s experience though and when I threw him over the railing at the top of Horseshoe Falls it didn’t take long for him to disappear over the edge and plummet those 53 metres into the thrashing hydraulics at the base. An estimated 5,000 bodies have been found at the foot of the Falls since 1850 and about 40 people – mostly suicides – are killed each year when they are swept over. Like most visitors I looked into that fast moving water and listened to its constant roar and tried to imagine what it must have been like to go over, either accidentally or on purpose. Dave Munday was apparently so hooked on the sensation that he returned for a second successful ride, but most who tried did not survive. Kirk Jones aimed to suicide on his first plunge but despite no protective gear or flotation device, made it out alive. (He went over again in 2017 but it’s unclear whether he meant to finish the job as this time he – and bizarrely, his pet snake – were inside an inflatable ball. It didn’t save either of them.) But my favourite was the first known person to go over, 63-year-old Annie Edson Taylor. Against the odds she emerged from her barrel with just a few bruises and her terrified white cat, Iagara. Legend has it that its fur had been black before the ride.

Despite Brian’s initial reservations I think he would have been chuffed to know he was in the company of so many intrepid (ie plum crazy) adventurers. Of course the risk to life and limb was not an issue for his ashes, but I don’t think that detracted one bit from the exploit. So much of his life had been about overcoming obstacles and the Falls drop was a fitting tribute to his tenacity and courage. He was one of the best and as the shuttle took us back to Buffalo I longed to be able to have just one more conversation with him, to tell him that despite the hole his death had left in our lives, they had also taken many surprisingly happy turns too. Careers and engagements and new relationships… I’d love to know what he thinks about it all…

At the airport, waiting to board our flight back to JFK, I was still preoccupied in my reverie and probably looked a bit dopey. Why else would a member of the ground staff who’d been pushing a wheelchair around the crowded terminal, apparently looking for the aged/infirmed passenger meant to go in it, stop in front of me? His hopeful grin met my withering glare, while Jo laughed so hard she almost lost her place on the Xmas card list. I felt fit and energetic and certainly not in need of wheeling – and was more than a little tetchy at the assumption after my dementia scare earlier in the year. (All tests had eliminated that frightening scenario and the diagnosis of moderate-to-severe sleep apnoea was a relief. Explained a lot and was easily treated.)

Screw the wheelchair ­– given the right mood and barrel, and lots of gin, I could almost be Annie. 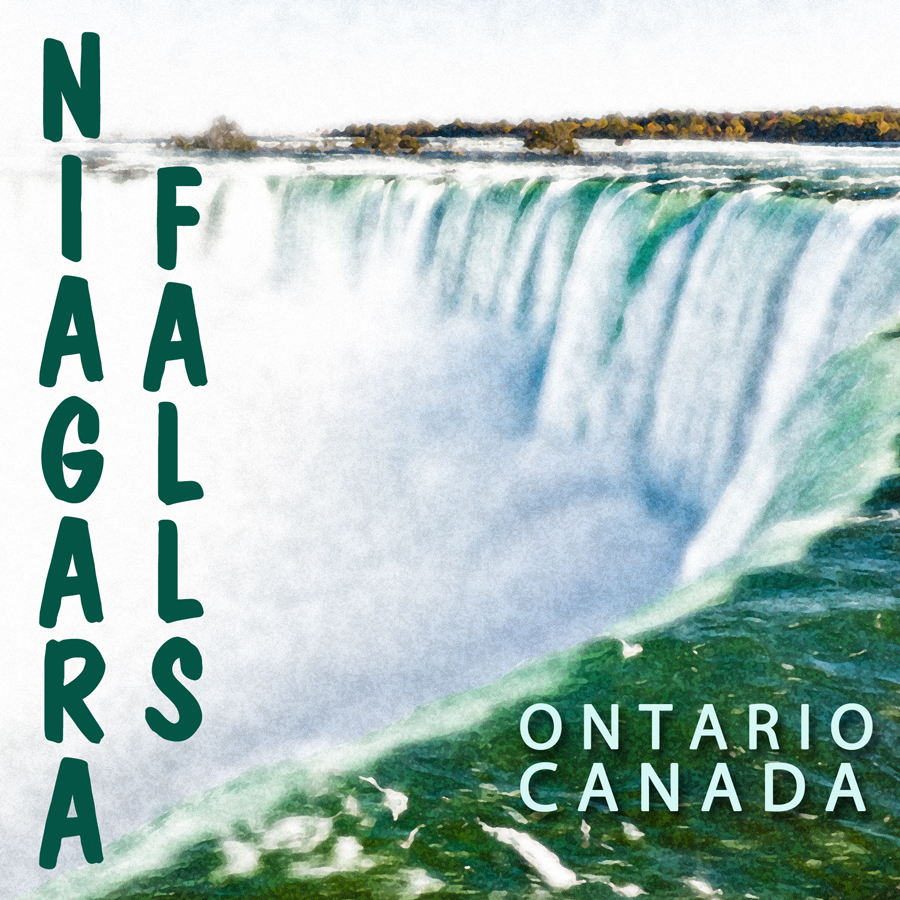 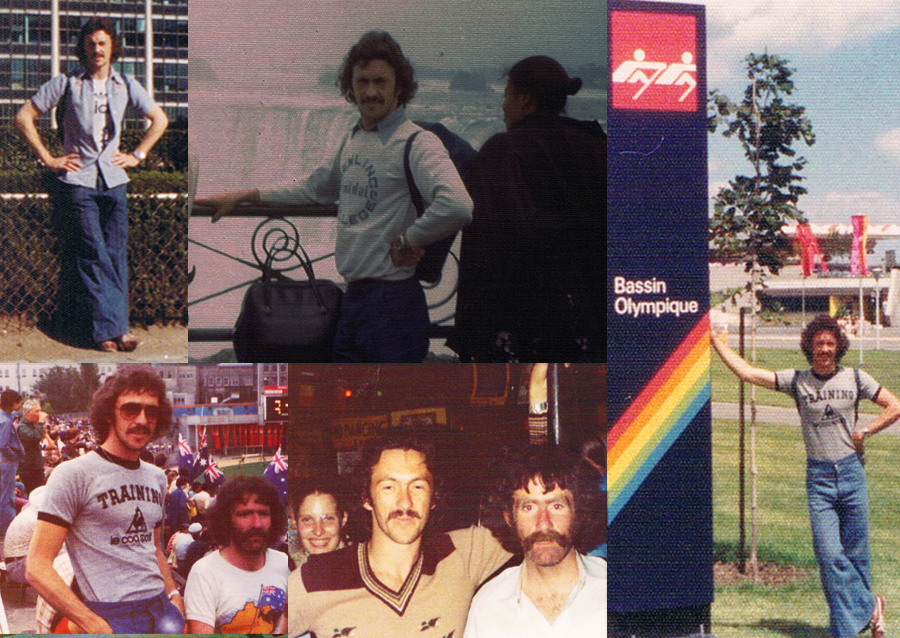 Brian had a blast on his 1976 visit to Niagara Falls, never imagining then that he’d return the way he did. 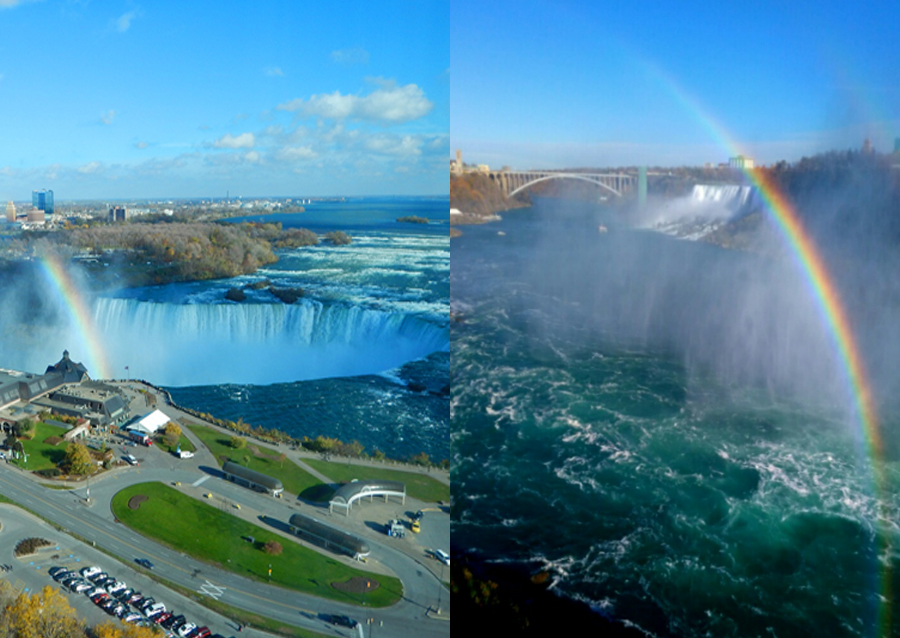 The frequency of rainbows around the Falls does not diminish their wow factor. 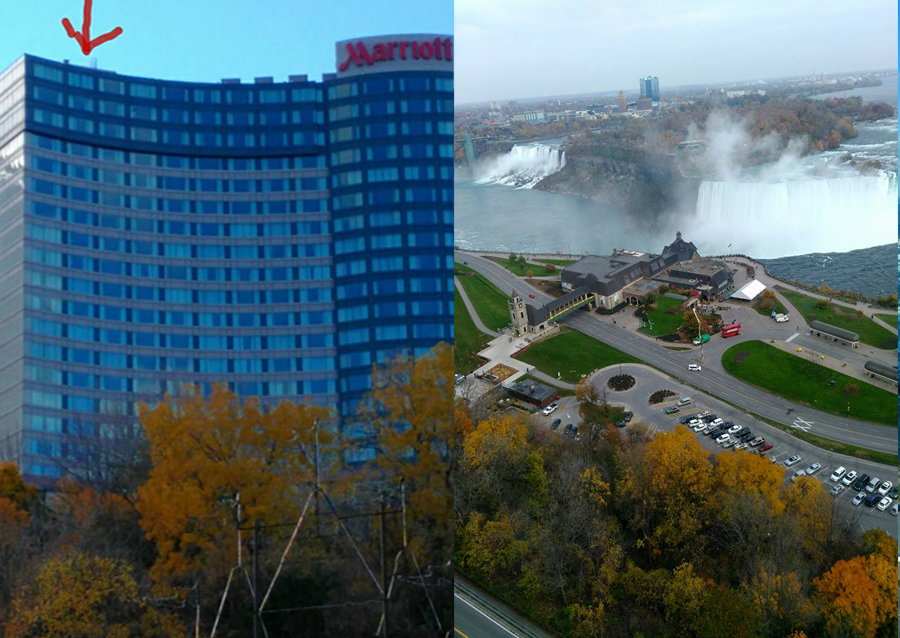 The room where we stayed for a remarkably reasonable rate, considering the magnificent view from the window. 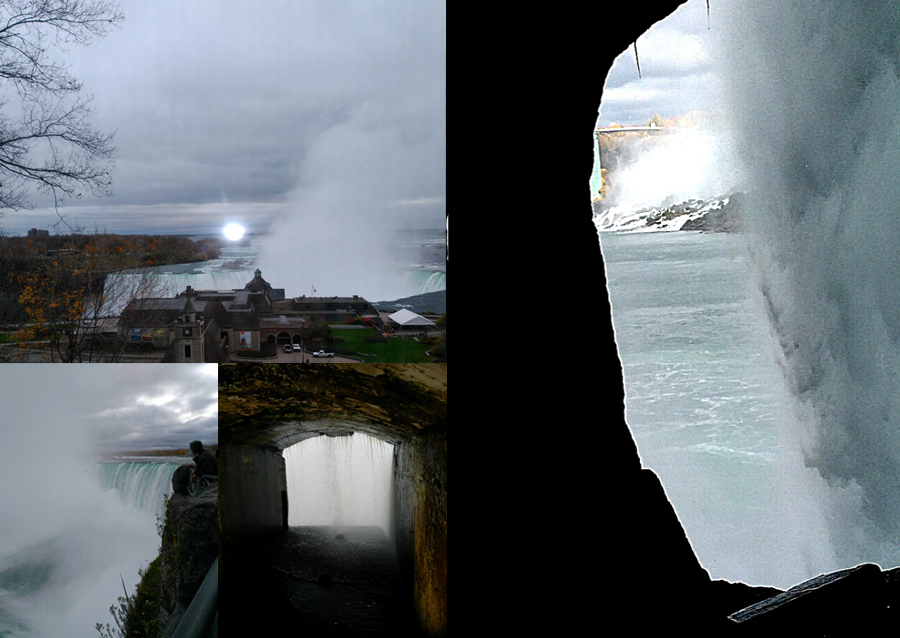 The awesome power of the main (Horseshoe) Falls – 1,400 cubic metres of water pouing over the brink at 109kmh – is especially clear from the Behind The Falls tunnel. The Falls were formed about 10,000 years ago during the Wisconsin Glaciation period, at the same time as the Great Lakes. 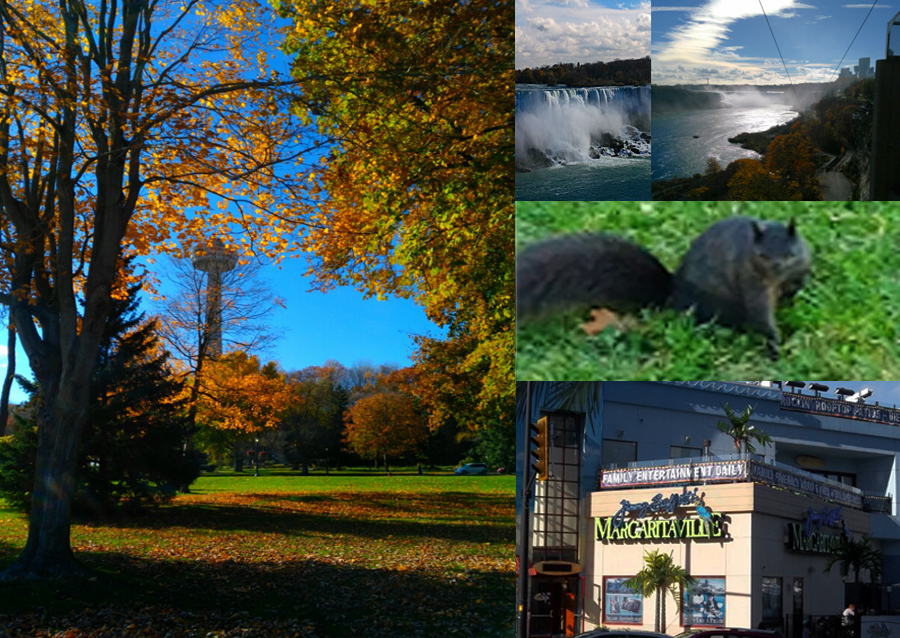 Around the town of Niagara: the Skylon Tower from Queen Victoria Park. The American Falls, one of three cascades that make up Niagara Falls. The zipline we’d looked forward to riding but was unfortunately closed on the two days we were there. A black squirrel, the first I’d seen. Jimmy Buffet’s Margaritaville bar where we wasted away on a couple of Booze in the Blender variations. 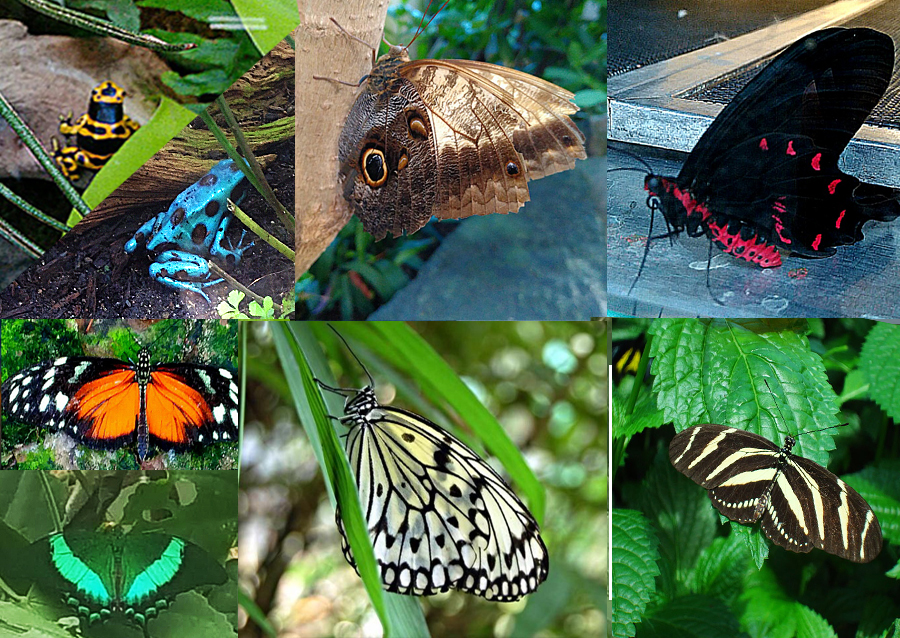 Some of the little critters we saw on our very pleasant walk through the Niagara Parks Butterfly Conservatory: the pretty but poisonous dart frogs; the metallic looking Owl butterfly; the red and black Doris butterfly; the Zebra Longwing; the Mosaic butterfly; Monarch butterfly and Emerald Swallowtail. 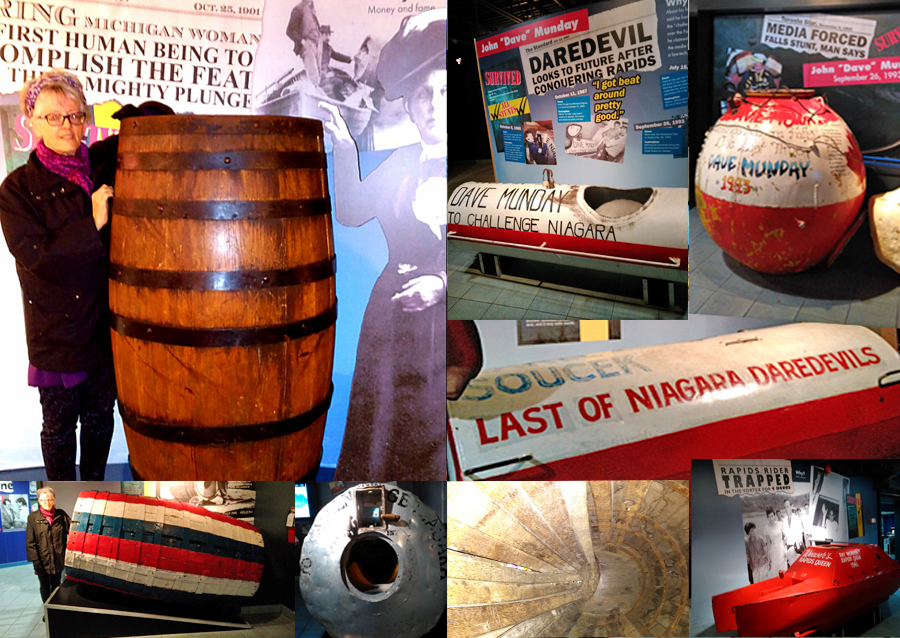 At the Daredevil Museum the various barrels used to go over the Falls really showed the level of crazy required to attempt such a feat. Annie Edson Taylor, the first known survivor (1901). Bobby Leach (1911) who survived with just a few broken bones but later died after slipping on an orange peel. Chuck Stevens (1921) tied himself to an anvil inside his barrel but when it was recovered, only his arm was left. George Statakis suffocated to death when his barrel was trapped behind the Falls and Robert Overcracker was killed when he rode a jetski over and his parachute didn’t open.

Our Hornblower Cruise took us soggily close to the base of the Falls. 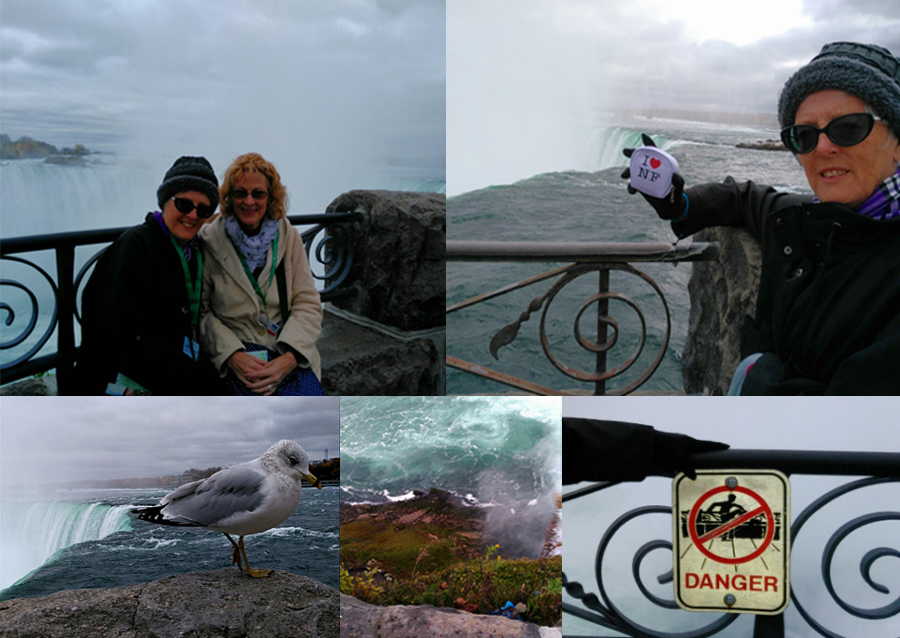 Jo and I just before the drop. The less than impressive vehicle that took Brian over. A curious gull that also witnessed the event; the rocks at the base of the Falls where we think Brian became wedged after his drop (based on the fact that Jo’s eyesight is superior to mine and she thought she could see something white).