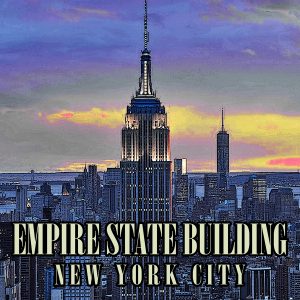 Brian didn’t have any particular fondness for the US (when nominating his ‘N’ drop, Niagara Falls, it was “make sure I go over on the Canadian side”) and he only visited New York City once, but something about that hectic metropolis really grabbed him. He was on his way to the Montreal Summer Olympics in 1976 with a couple of mates and their stopover in The Big Apple took in all the regular tourist attractions, including of course the Empire State Building.

I’m definitely not a city person but NYC was always on my bucket list too and when I travelled there 10 years later I also headed for that famous limestone skyscraper. It was my first overseas trip and my Bankcard was on its last choke, having exceeded its limit several cities ago, but with only a $10 note and a few quarters left in cash I had to just keep charging and singing ‘la, la, la’ whenever thoughts of paying it back intruded (you could do that back then… until the end of the month when they caught up with you, anyway). My selective delusions included booking a minibus tour of all the popular Manhattan landmarks, a deal that included a choice between The Empire State and The World Trade Centre. No contest, I reasoned – the Empire State is just way too New York to miss and the WTC… well, it will always be there…

On that foggy February day in 1986 only the tops of the Twin Towers could be seen from the viewing platform on the 86th floor. Fast forward another 30 years and I stood in the same spot with my sister-in-law Jo, but with a much better view and a little Brian in my bag. This time I could clearly see lower Manhattan, and the new One World Trade Centre that replaced the fallen towers. It was as spectacular as you’d want an urban view to be and once we’d walked around the deck and took photos from every angle, it was time to sprinkle our boy through the caged ‘suicide fence’ and out over East 33rd.

New Yorkers are understandably alert to any potential threat and as the most contentious presidential election would be held the following day and both candidates were in town, tighter than usual security was evident all around the city. Barricades and cop cars were everywhere so scattering human ashes from the Empire State – while harmless and not so much illegal – could probably be considered poor timing. But I couldn’t be there and not do it, so discreetly paced the drop between the guards’ constant patrols. After one passed I whipped out the bag and Jo snapped a few pics as B went sailing off into the sun.

“Ma’am,” rumbled someone who sounded like Barry White. The face matched the voice and I slunk over to where the large black man with the official peaked cap was frowning. “What did you throw off there?”

He nodded gravely but didn’t shoot me, and asked if it had been the husband’s wish to be scattered there. When I said yes he nodded again, squeezed my hand and smiled, “Then I won’t tell anyone.”

I melted a little inside (his eyes were more Denzel than Barry) and thanked him for that, but didn’t push my luck and ask for a selfie. He moseyed off to serve and protect while Jo and I took the elevator back to street level. The ash drop had been the main reason to include New York on this journey but as always there was still plenty to do in such a full-on city. It was my third visit – I’d also taken Mum there in 2010 – but each trip involved different experiences and there were always new things to see.

This time we did Harlem and its markets and walked the Highline, the former West Side railway line that runs from the Meatpacking District through Chelsea. It’s a brilliant way to see that part of the city and some of the amazing buildings along the way. We also toured the One World Trade Centre and its eerie Ground Zero Museum, the cavernous memorial to the events of 9/11. Predictably its design and inclusions have caused controversy, but while it’s probably clear from some of the ash drops that I’m not big on reverence, I could only think that it was a very moving tribute to the victims of that terrible day.

But architecturally impressive as it is ­– and although it’s one of two buildings that now outrank the Empire State as the city’s tallest – it just does not spell New York like that familiar and beautiful art deco icon that provided Brian’s latest launching pad. 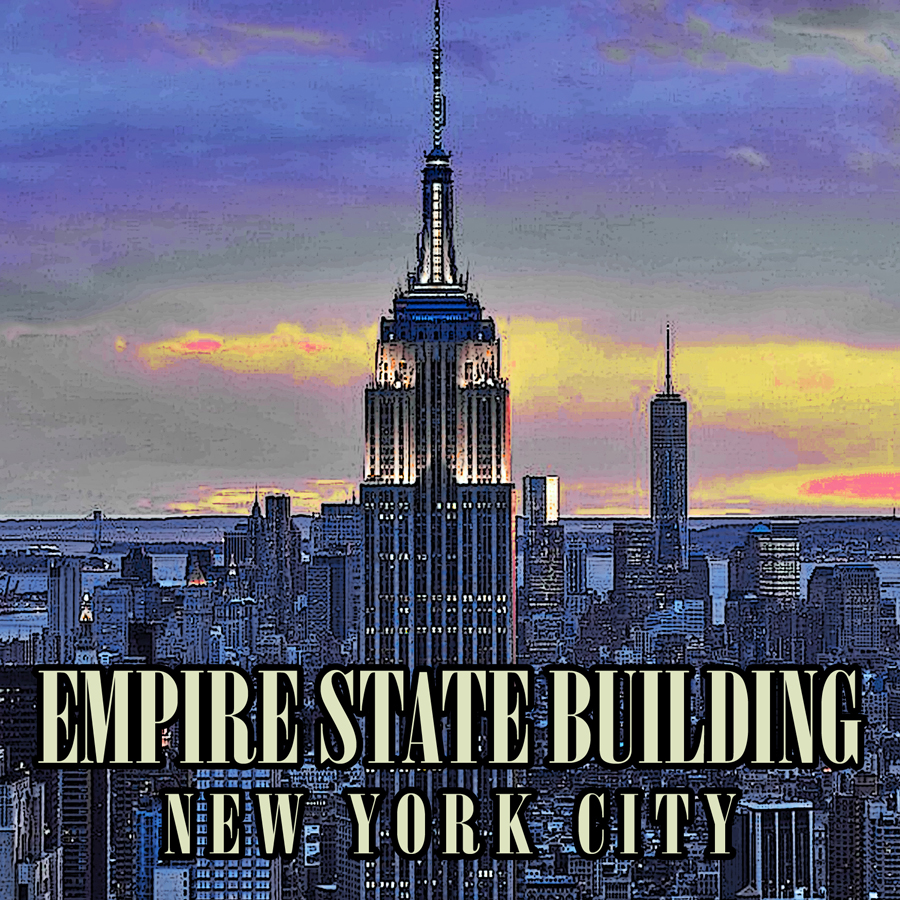 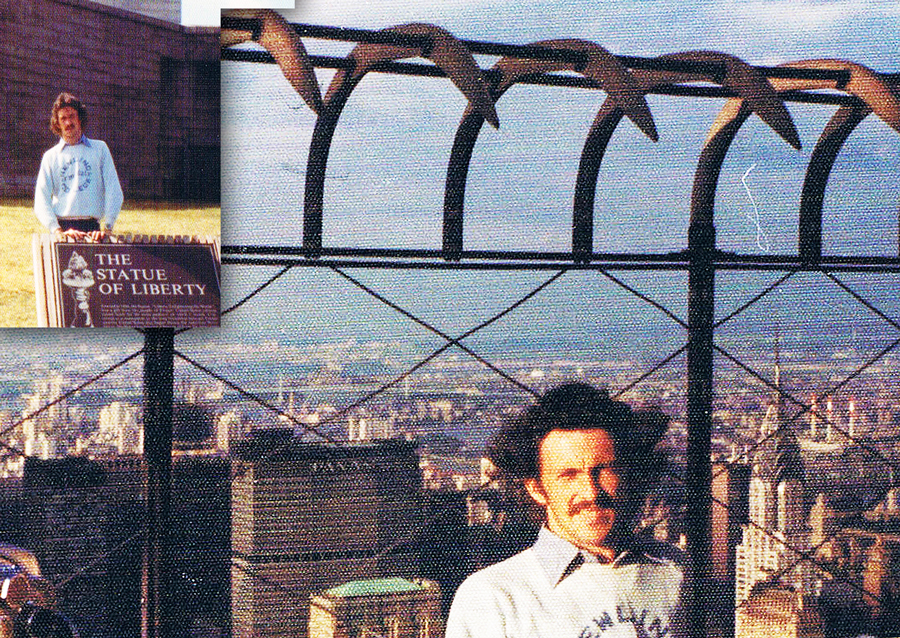 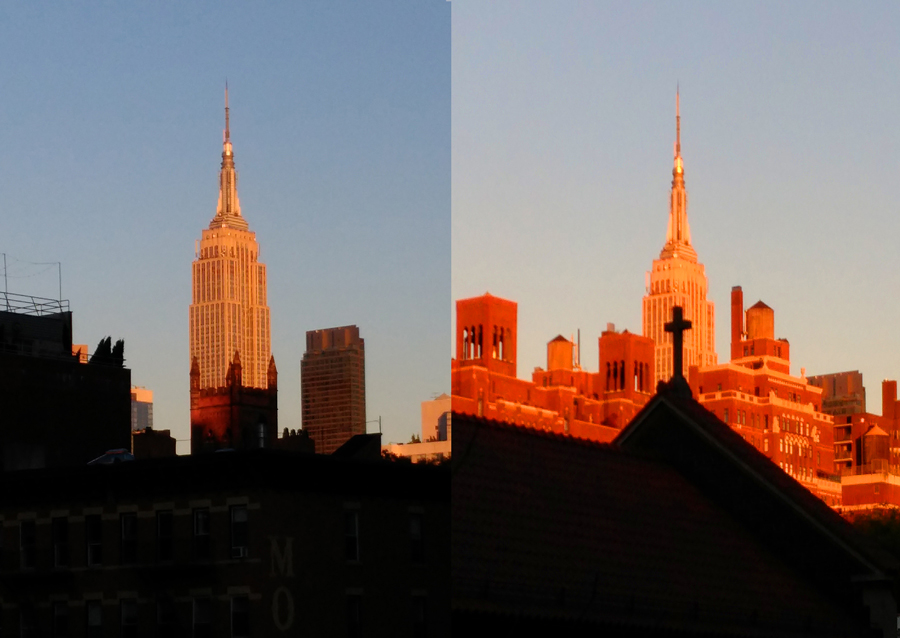 Two views of the building’s spire from different locations in NYC. 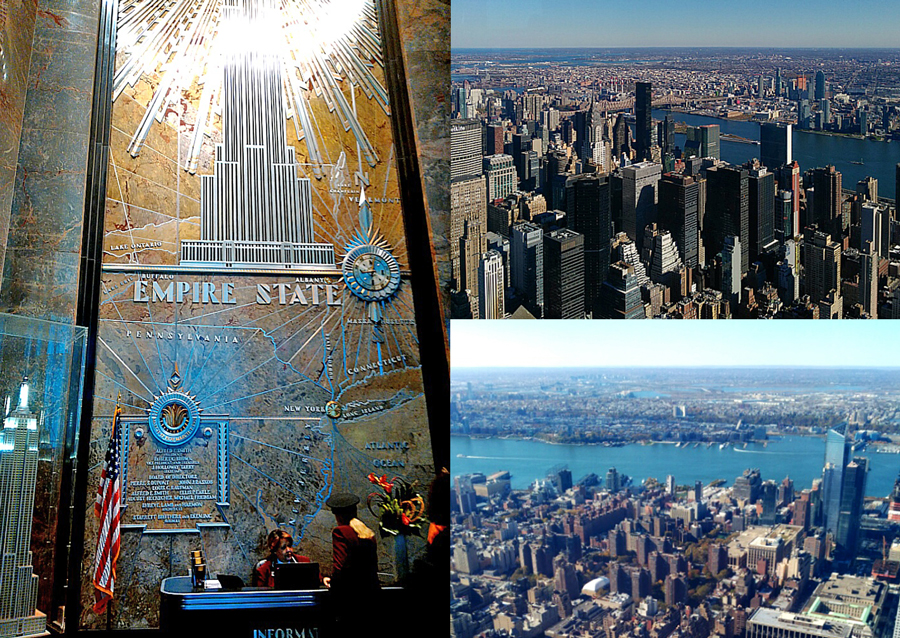 It is claimed that on a clear day you can see five states – New York, New Jersey, Connecticut, Massachusetts and Pennsylvania – from the upper observation deck on the 102nd floor. At 381m the Empire State is 60m higher than Australia’s (current) tallest building, the Q1 in Surfers Paradise. 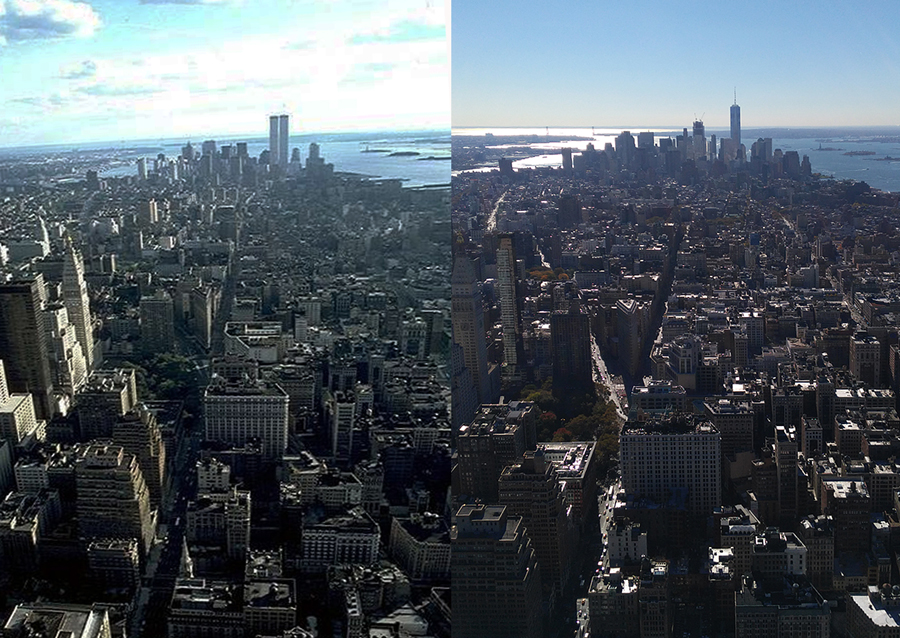 The view of Lower Manhattan from the 86th Floor before September 11, 2001. and the view now. 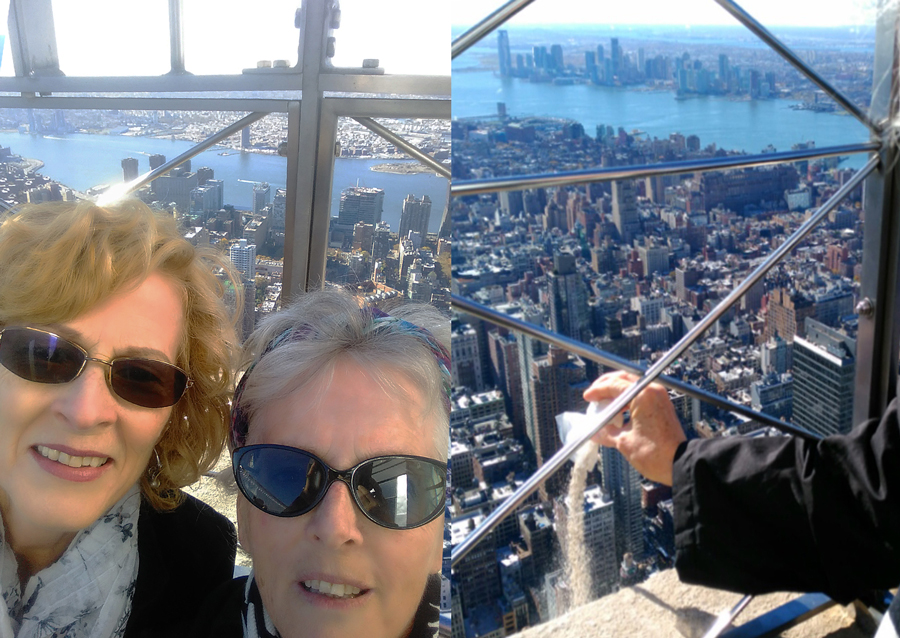 Jo and I on the deck just before I emptied some Brian over the edge. 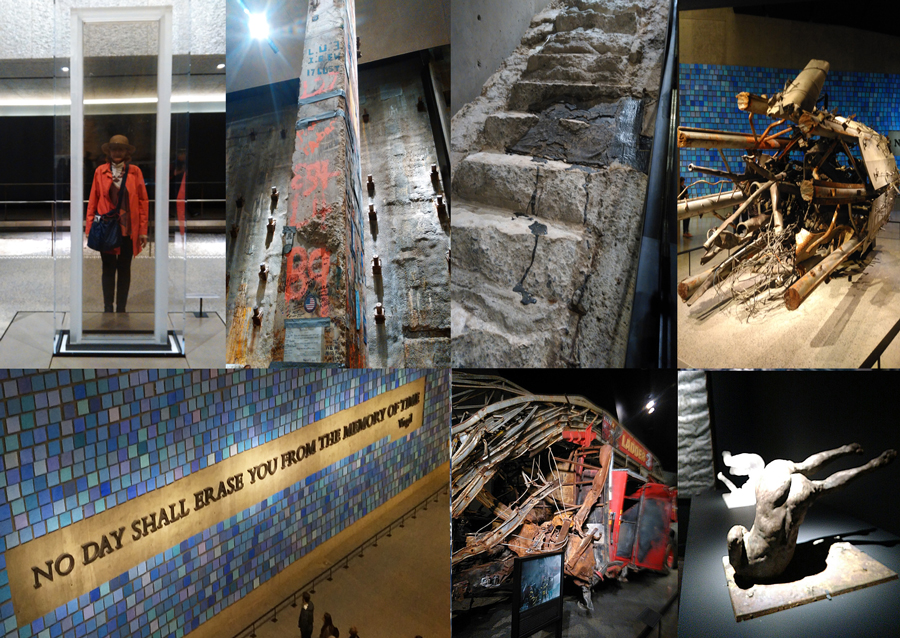 At the 9/11 Memorial – Jo behind the only window pane that survived the buildings’ collapse, the last column removed from Ground Zero, part of The Survivors’ Staircase, the antennae from the North Tower; a damaged fire truck; both Tumbling Woman sculpture in the centre’s art gallery and the inscription on the museum wall have caused controversy as being inappropriate. 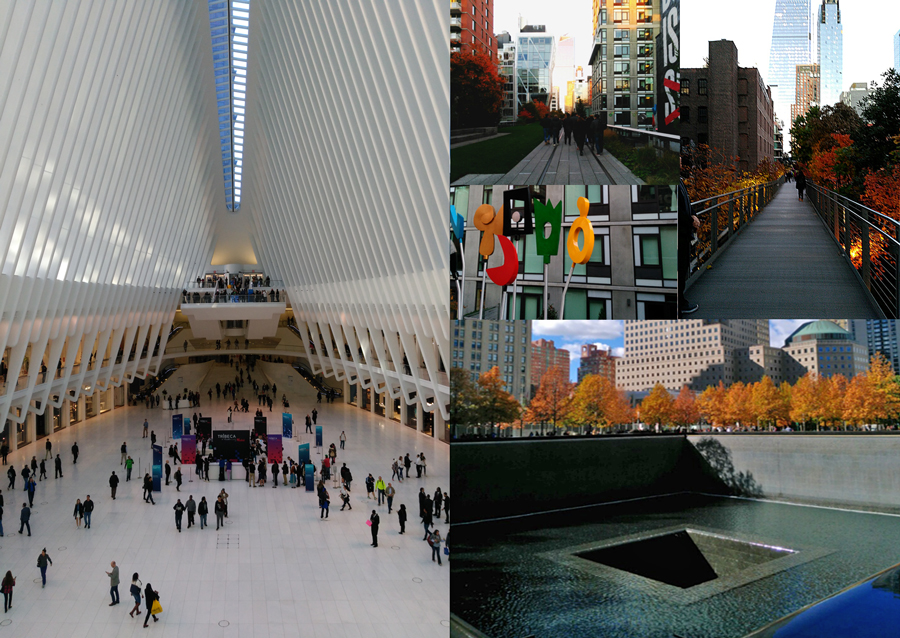 The WTC shopping mall is an astounding structure; scenes from the Highline elevated linear walkway; one of the two memorial pools that stand at the bases of the original towers. 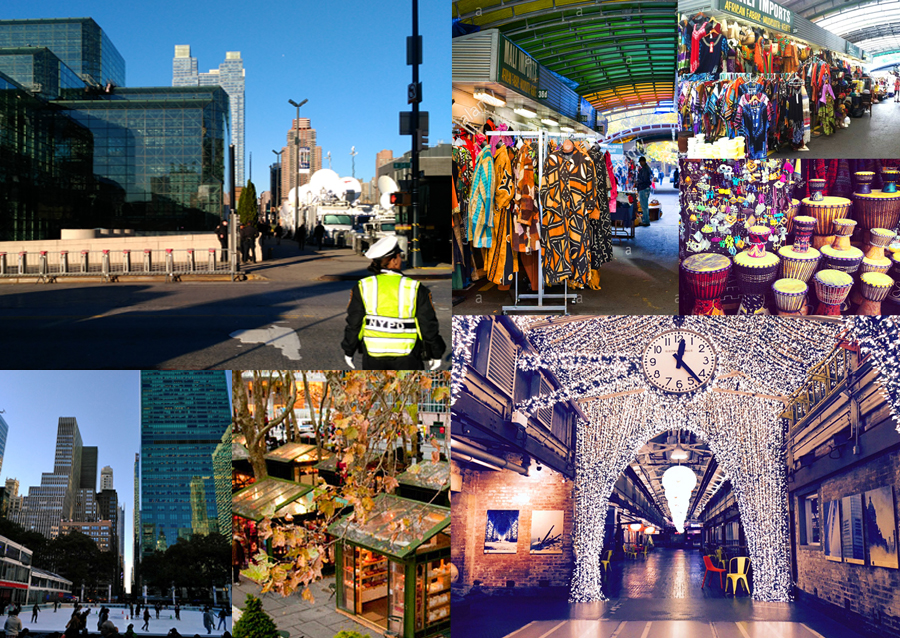 Police and media presence at the Javitt’s Centre where Hillary Clinton and her supporters would watch the election coverage the following night; the Malcolm Shabazz Markets in Harlem; the famous Chelsea Markets; the markets and skating rink at Bryant Park 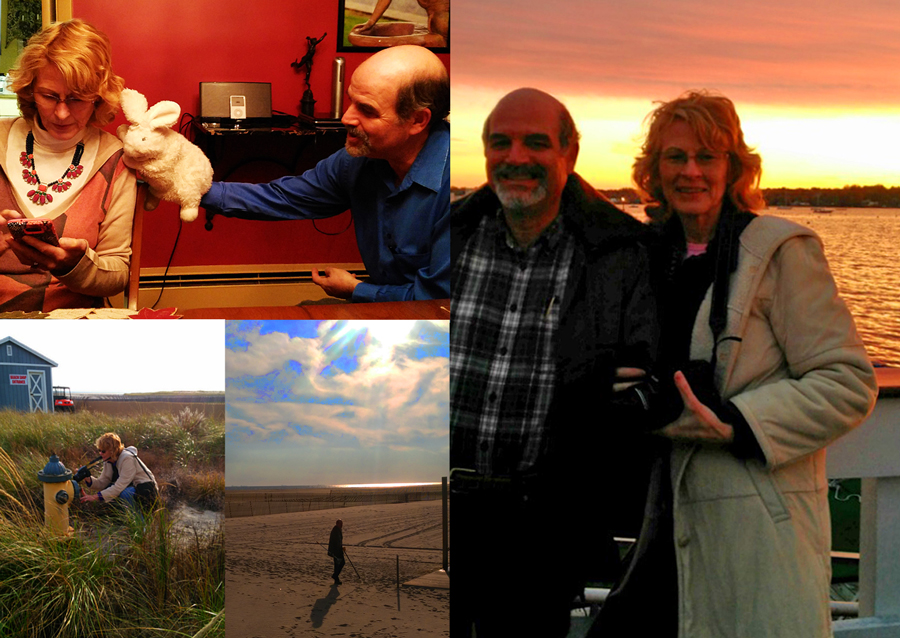 From their home on Long Island my very generous hosts Jo and Chip showed me their New York – and Chip even provided the mandatory rabbit via his little buddy King Edward IX, aka Eddie. 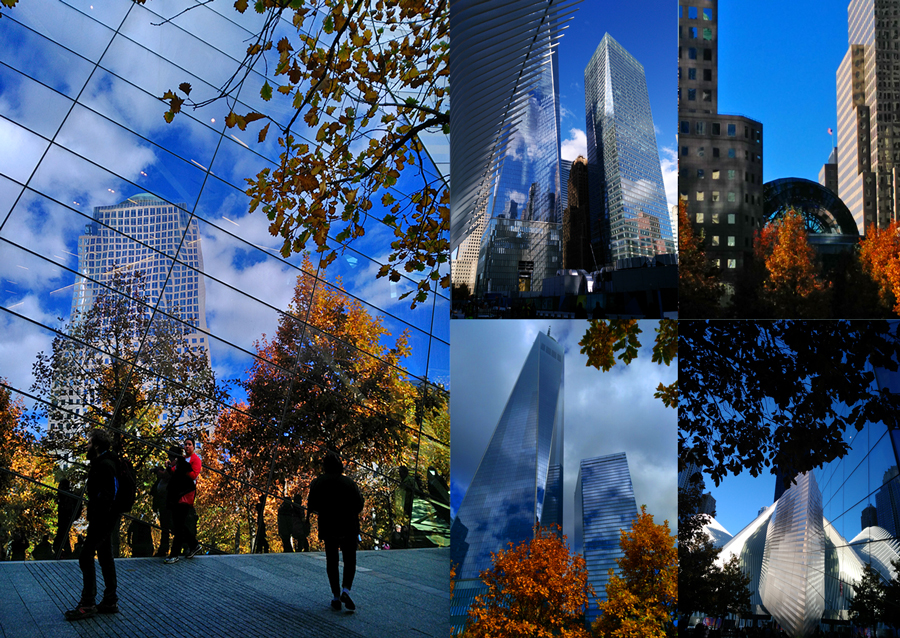 More of the contemporary architecture around the One World Trade Center.