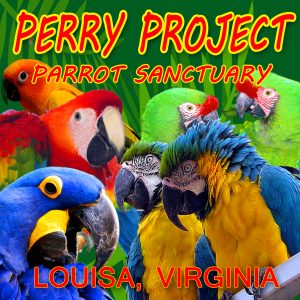 “I just want to see my birds again.”

Bugger. We’d relocated Brian to the lounge room a few days before when the television in the back room died, and now he wanted to move back again. It would take a while to get him resettled in the recliner and set up his ventilator and arrange all the medications within reach, and he’d be bored without his favourite TV programs. The space was tiny and easier to heat but cramped with all his paraphernalia. I tried to talk him into staying in the larger room but he looked so worn… and he wanted his birds.

Lately that poor skeletal body could not get comfortable whether sitting or lying down and his constant restlessness the past couple of days had been exhausting for both of us. My patience was strained this Sunday morning but he asked very little and realistically I had nowhere else to be… and of course if I’d known that this time tomorrow he’d be gone, I’d have given him the earth.

‘My birds’: the corellas, eastern rosellas, black cockatoos, wrens, egrets, kookaburras, brush turkeys and lorikeets that coloured our yard and raided the chooks’ food. They sometimes perched on the deck rail to peer through the glass doors at the man with the telephoto lens, who captured some magic shots of them. As they became more used to him they demanded attention and when he felt well enough to walk outside they let him hand feed them (they only squawked and glared at me). His little feathered buddies brought him such joy and he took it hard when an injured Nightjar we found and passed on to the wildlife service did not survive, and a mama owl nesting high up in the macadamia tree lost her eggs to destructive currawongs.

Birds had to feature at an ash drop and when I discovered my journey from Georgia to New York had a parrot sanctuary en route (sort of), I booked a stop at the nearest large town, Charlottesville. That place was a gem on its own but I needed to get from there to the remote haven in central Virginia where Matt Smith has set up Project Perry; not simple without my own transport, but oh so worth it. The project, named for his beloved Conure that died, takes in unwanted, injured and abused birds and nurses them back to health for adoption or to live out their days in the near to natural environment of the sanctuary. Some are exotic varieties, naïvely purchased as pets by people unaware of the stress that a cage-bound existence places on creatures meant to fly free and socialise with others of their species. The birds pay for this human ignorance when owners lose interest or cannot cope with the excessive noise, aggression, and self-mutilation that sometimes results.

Matt and his partner Kirah have turned their 15 acre property and even some rooms of their home over to the 200-plus birds in their care. Warehouse sized aviaries have been custom built to provide enough space for the African Greys and others to fly and interact with each other. Matt can recognise each bird and gives a rundown on its personality and background, his passion for them equal to his commitment to raise awareness of their needs and see them find their forever homes. I fell in love with Ronaldo, a tame African Grey, and would have loved to smuggle him home in my carry-on.

The Global Federation of Animal Sanctuaries accredited the Project in 2014, acknowledging its exceptional programs of rescue, veterinary care and rehabilitation. And education – birds represent the largest population of captive wildlife in the US and Matt makes sure visitors to the sanctuary understand the realities of caring for them. But his time and energies are precious so his availability to supervise guests is limited. I was therefore lucky to score a private tour of this avian paradise and was warmly welcomed as their most far-flung visitor to date.

The screeching and flapping and technicolour whoosh as the birds flashed by would be an ornithophobe’s nightmare but I soon became used to the sounds and smells and mildly suspicious eyes inspecting my face and nibbling on my headscarf. With a yellow Jenday perched on my shoulder and several others squawking their curiosity, I sprinkled some Brian beneath a branch in the Amazon parrot aviary. These might not be ‘his’ birds, but I’m confident Project Perry is a place he would have been blissfully happy to settle. 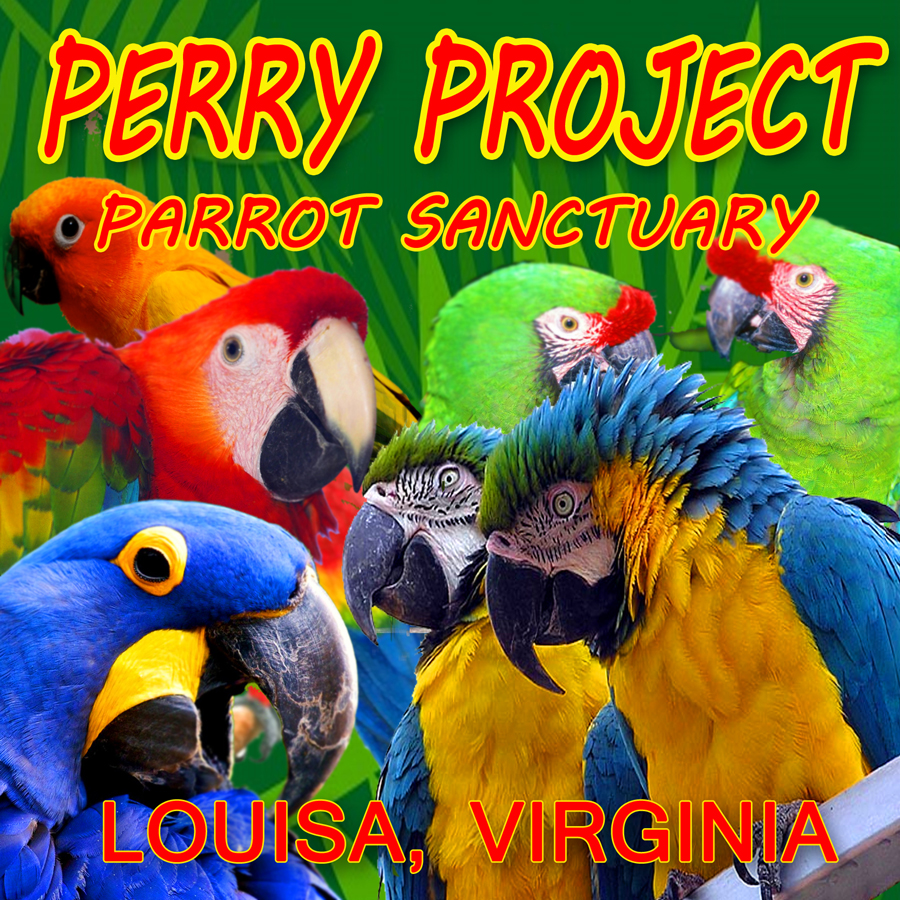 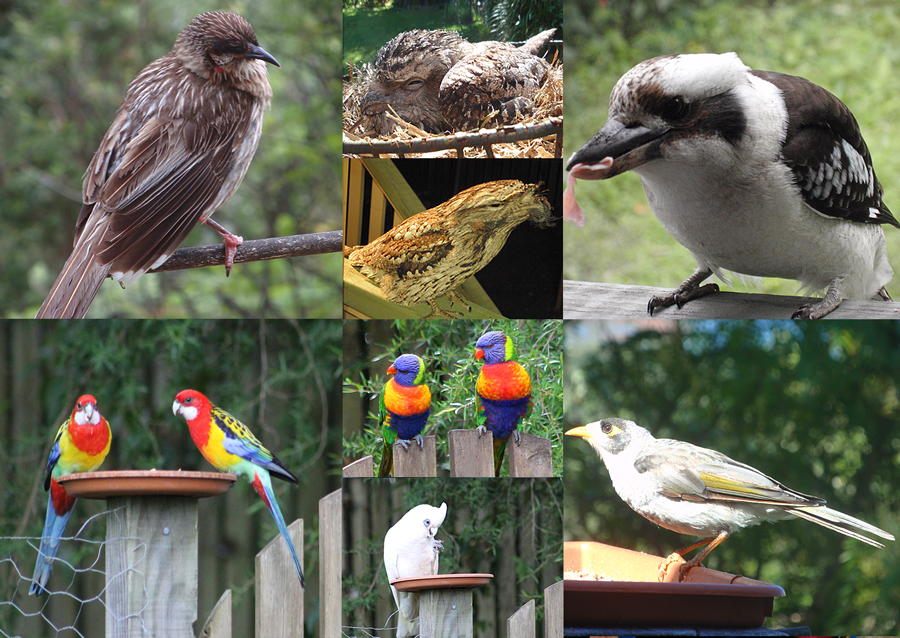 Some of the photos Brian took of the birds that used to come into our backyard. 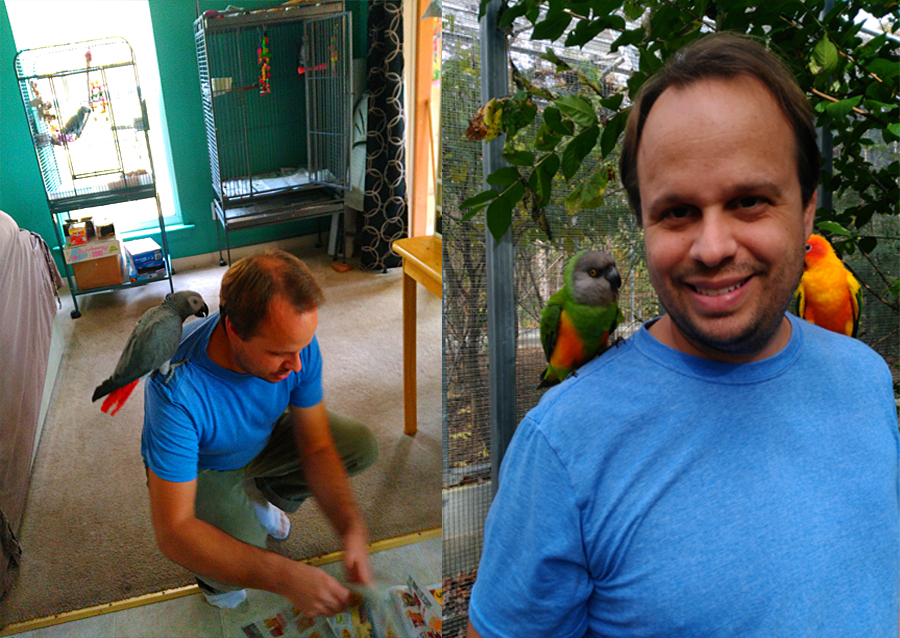 Matt Smith and some of his beloved birds at Project Perry. 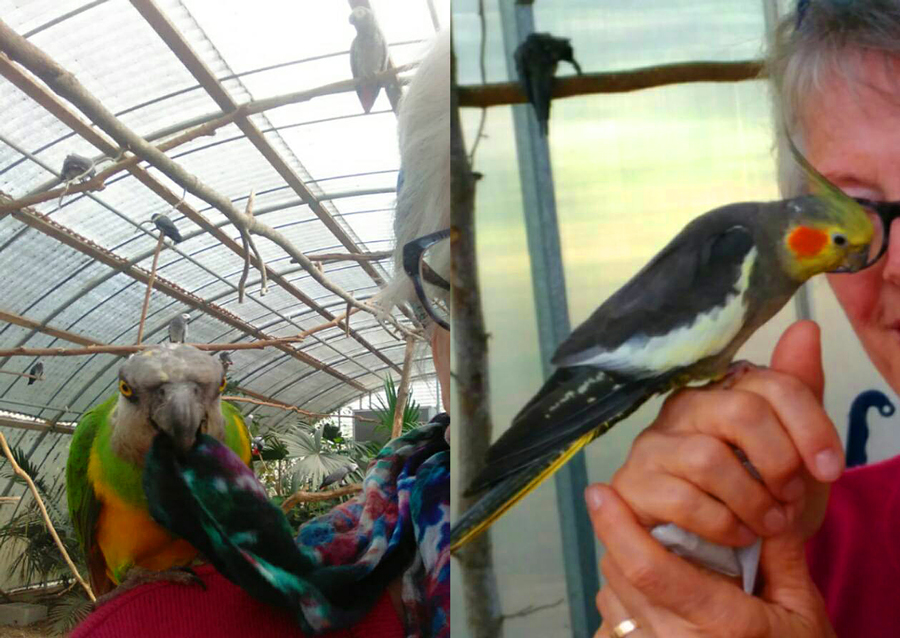 The cheeky birds have individual personalities and quirks. 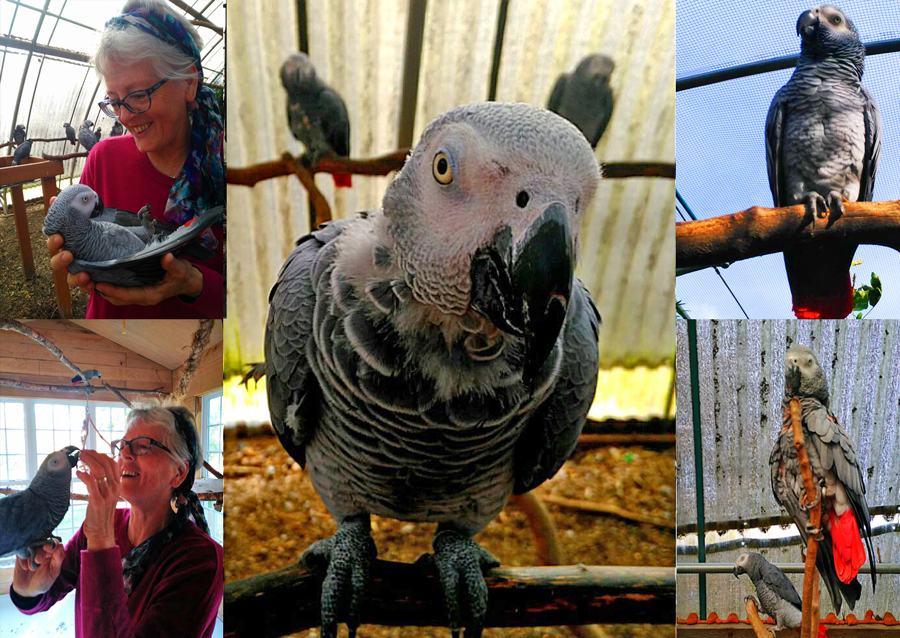 While they are prized for their ability to mimic human speech, making African Greys a popular companion pet, they can become distressed in captivity unless they receive adequate stimulation. Their high level of intelligence enables them to learn number sequences and a sizable vocabulary, plus colours and shapes. 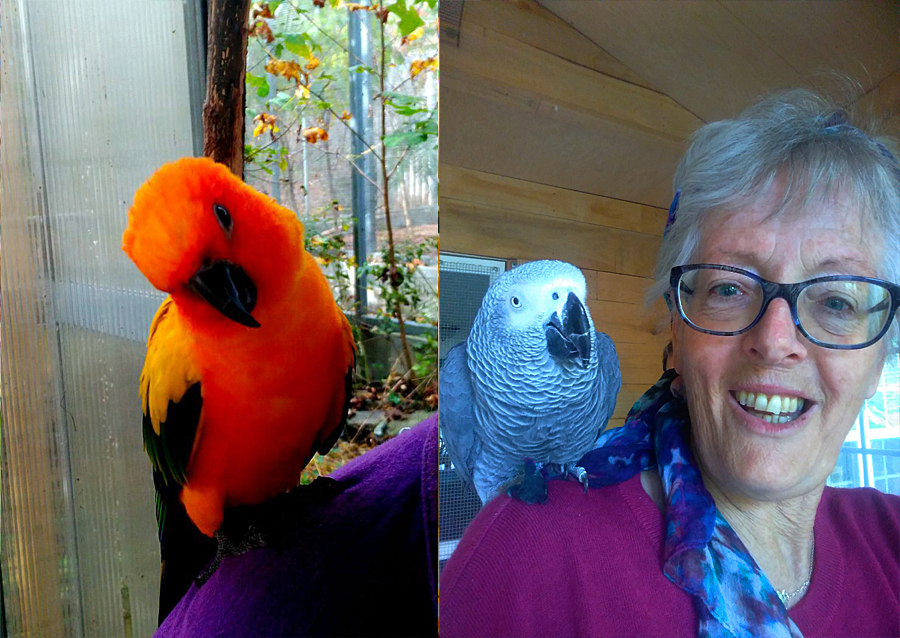 The stunningly coloured Jandaya parakeet (or Jenday Conure) is a neotropical parrot native to Brazil, intelligent and sociable with a loud, shrill call; the friendly Ronaldo is a staff and visitors’ favourite. 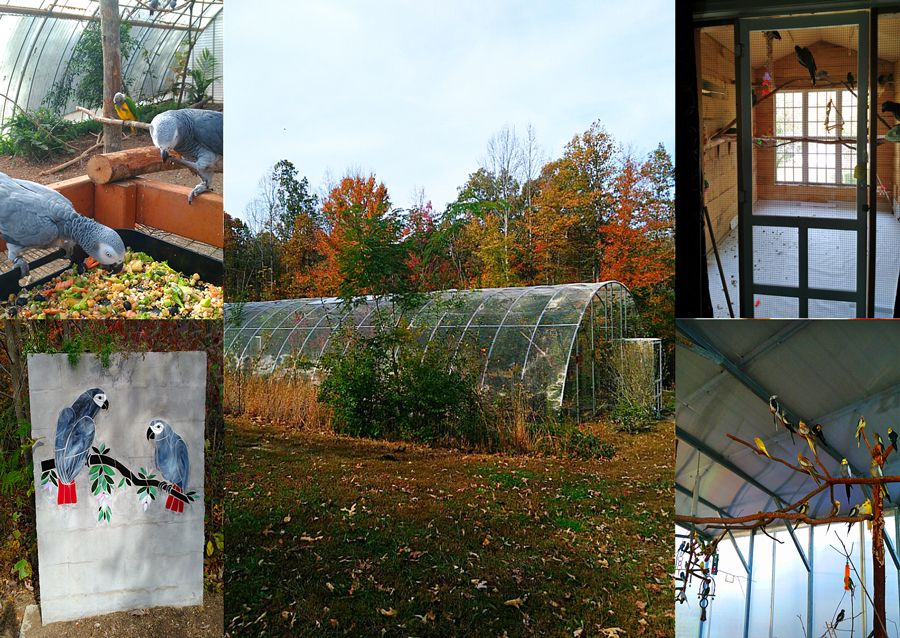 In an attempt to replicate their natural habitats to enable as much free flight as possible, the large aviaries and rooms at the sanctuary are purpose-built for the various species (The parrot mosaic was donated by Virginia artist Connie English) 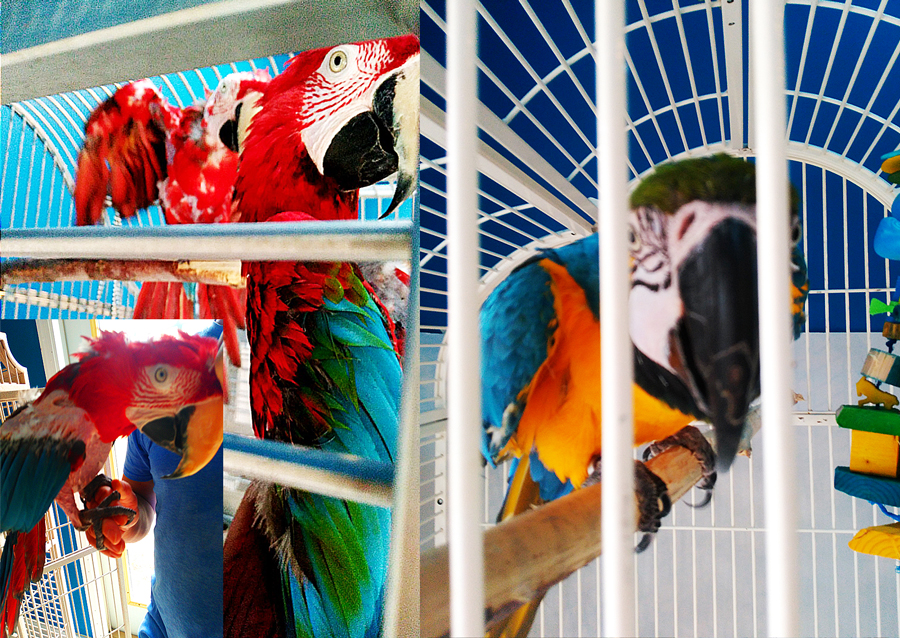 The scarlet macaws (ara macao) and blue and gold macaws (ara ararauna) now have their own huge aviary but when I visited it was still under construction, so they were necessarily confined to large cages in Matt’s garage area. Their frustration was apparent and though their magnificent plumage was attractive, my fingers weren’t going anywhere near those powerful beaks that have a bite force of 500–2,000 pounds per square inch (humans average 150psi). 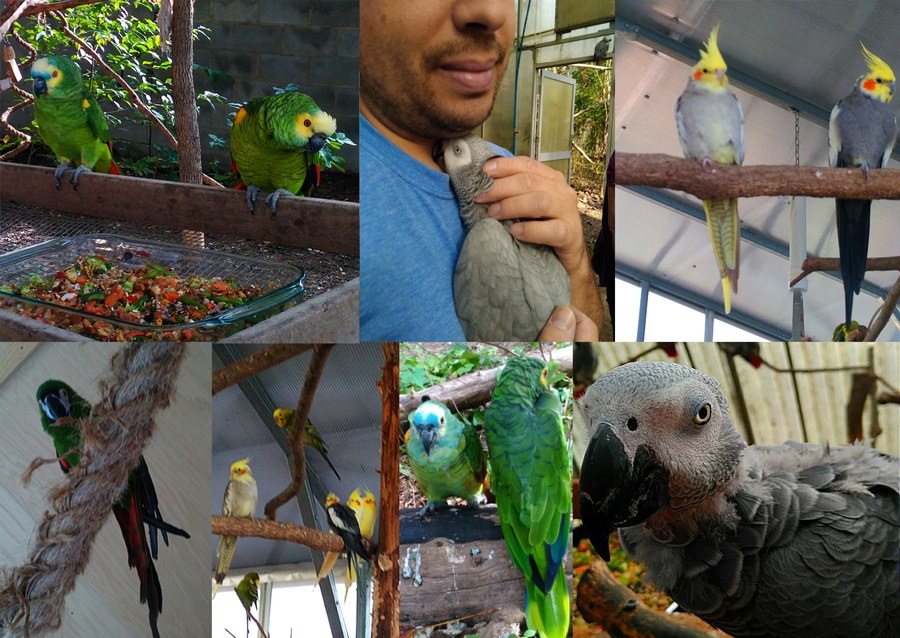 Some more pics of the lovely birds that call Project Perry home. 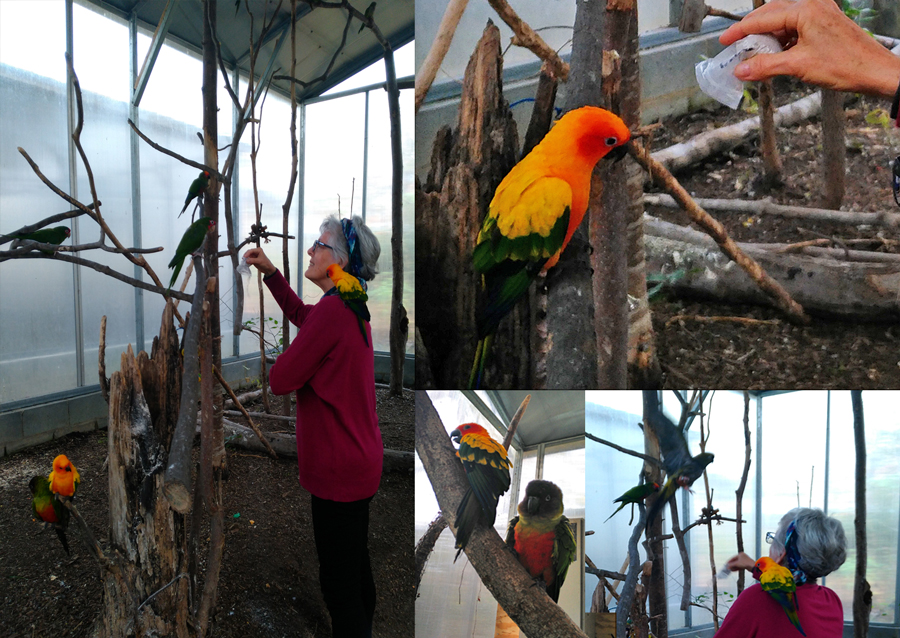 The ash scattering in the Amazon parrot aviary attracted quite an audience.