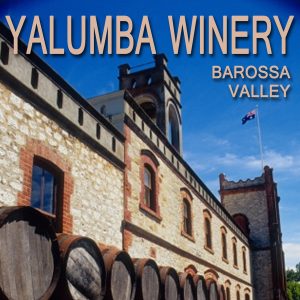 Driving into the Barossa after the barren centre was like taking a long, cool drink. The vines were seasonally bare but the richness of the soil and unrelenting green were so welcome. Brian used to talk about us all taking a trip there and wanted Yalumba Winery on The List, but his ‘Y’ of choice – Youlgreave, in England – superseded this. The ashes destinations are places he’d loved and wanted to return to, always dreamed of going to, or were relevant to our life together, but though he’d discussed at length the reasons for each inclusion, I can’t remember if Yalumba was one he wanted to visit again or had never seen.

I’m starting to forget a few such details and that’s bothered me some. Time has blurred many of our conversations and doing the ash drops – it’s inconceivable that I not complete The List – keeps a connection. They could also keep you living in the past, it’s been said, but I don’t believe that. If there’s a script for this widow thing I haven’t seen it but it’s clear that the whole question of moving on and at what pace is down to the individual. I’m comfortable with where I am with that and while I imagine ticking them all off will be an accomplishment, it might be an anticlimax too. Either way, on we roll.

For now that’s into the aptly named Eden Valley (also known as ‘The Garden of Grapes and Gums’). From the windy lookout at Keyneton Ken and I took in the lush hills and valleys and read up on the region’s human history, especially the original inhabitants and the early settlers of the 1840s. While there are few records of conflict between the Silesian Lutherans and the Peramangk people – who passed on valuable knowledge of hunting and native plant food sources to the newcomers – agricultural expansion inevitably led to indigenous displacement from the region. The dominance of German heritage endured throughout the Barossa for over a century and is still there in place names, architecture, music, festivals and cuisine. The tourism value of the region’s unique character was recognised when the state government passed the Character Preservation (Barossa Valley) Act in 2012, Premier Mike Rann insisting “We must never allow the Barossa or McLaren Vale to become suburbs of Adelaide.”

Angaston is the third largest town and home to Yalumba, one of the Valley’s 120+ wineries. Bavarian wine maker Johann Gramp migrated to South Australia in 1837 and began the Barossa’s famed industry, at Jacob’s Creek. He was soon followed by Samuel Smith, from Dorset in England, who planted 30 acres of vines and established Yalumba, an Aboriginal word for “all the land around”. After later success in the Victorian goldfields Samuel and his son Sidney purchased another 80 acres and today Yalumba is Australia’s oldest family-owned winery, one of only four in the world to have its own cooperage.

A decent sprinkling of Brian found a home between the barrels that are lined up in front of the iconic main building. No rabbit sighting, just a couple of nearby emus, bronze sculptures that enhance the manicured gardens. The premises are a celebration of the Hill-Smith family’s dedication to the winemaking craft, and the tasting room with its fireplace and artwork is an easy place to be. Ken’s not a wine fan but appreciates a good port so we picked up some of their Antique Tawny, a premium drop he saves for special occasions. The first of those was a couple of weeks later with Mum and Aaron, when we raised a glass to Dad. Ken and I had missed his bbq-and-barefoot-bowls memorial so this was our belated send-off to the wonderful Sheppy, a cherished father-in-law to Brian who enjoyed swapping a few yarns with Ken over a port as well.

At Yalumba I sampled and then bought a bottle of The Strapper, “a highly aromatic Grenache Shiraz Mataro exhibiting aromas of raspberries, menthol, smoky BBQ notes and hints of strawberry leaf.” None of the wine room ambassador’s spiel meant much to my uneducated palate – I just knew I liked it and it didn’t turn my face magenta. This pesky post-menopausal side-effect often has me looking like a boiled rock lobster before I can even get through a glass, but with The Strapper I didn’t pink up one bit. On a recent camping trip I broke out a bottle and it slid down just as smoothly from my dollar shop plastic ‘crystal’ as it had from the cellar door’s delicate glass stemware. 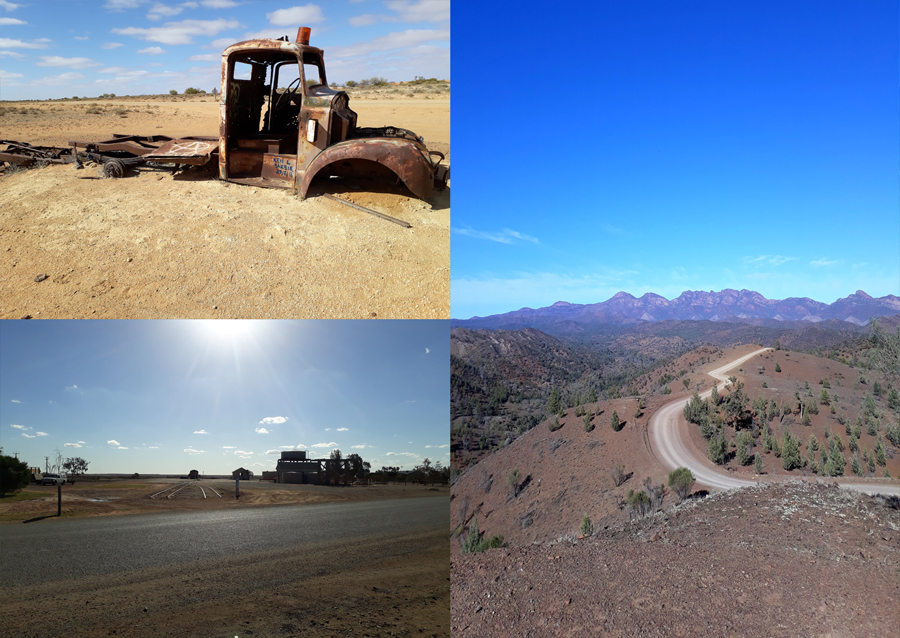 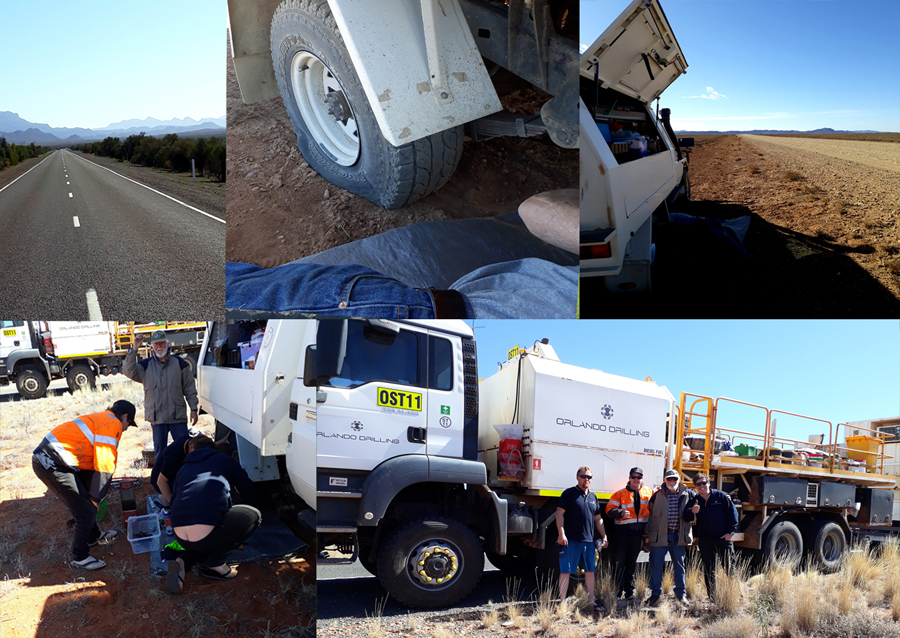 Adventures on the road – some we could have done without: the drive into the Flinders Ranges was fine... but a little further on we copped an unredeemable flat tyre on the road to Arkaroola, and a seriously unstable wheel on the Stuart Highway on our way to Coober Pedy; the very real possibility of our wonky wheel flying off the hub didn’t bear thinking about but our on-the-spot rescuers Mattie, Col and Bretto would restore anyone’s faith in fellow humans. 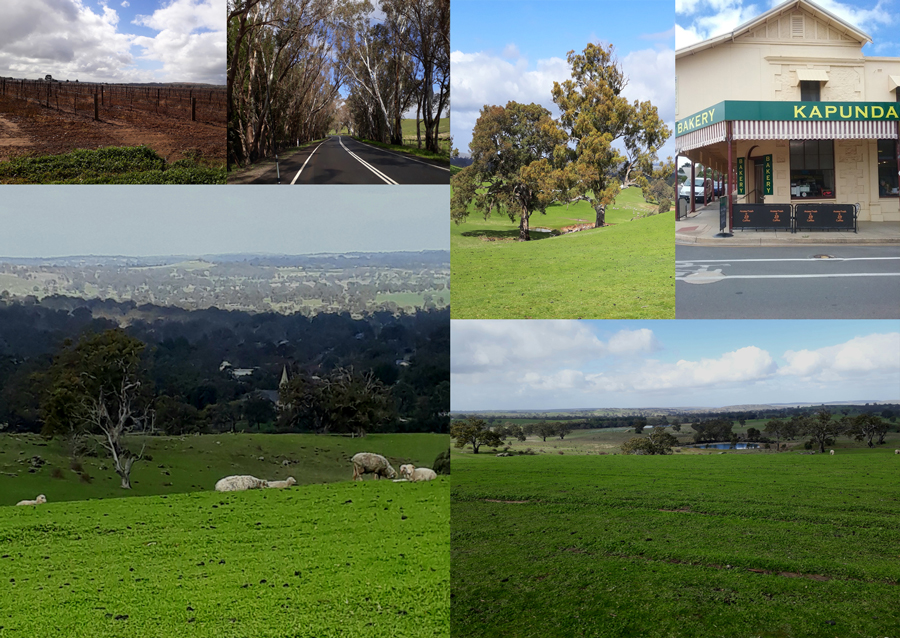 The vivid relief of the Barossa Valley livened things up again: grape vines taking a winter break; the road into the Barossa; the rolling hills of Eden Valley; a very civilised coffee shop in Kapunda where we stopped for lunch. 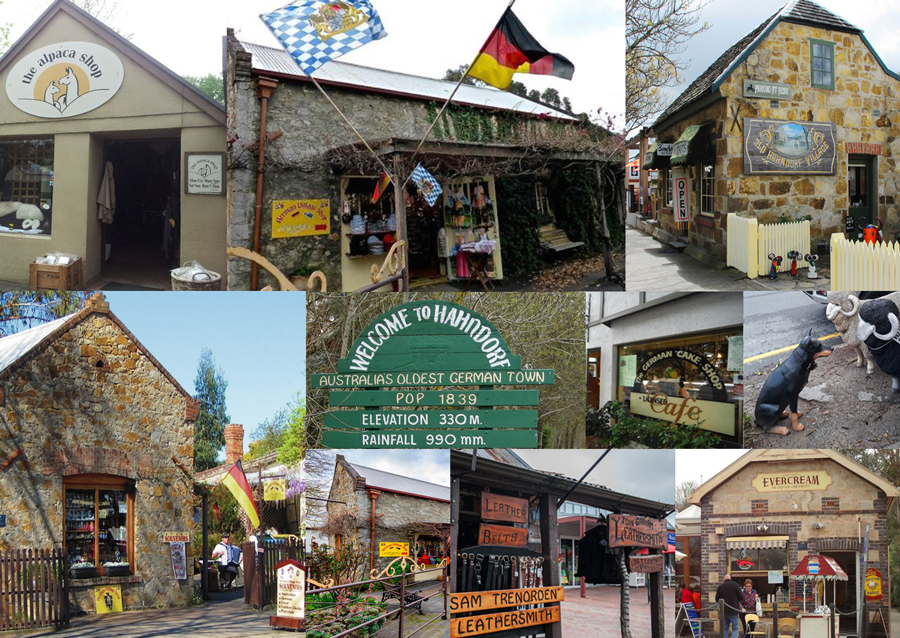 Hahndorf, so very German in its retail and tourism assets. 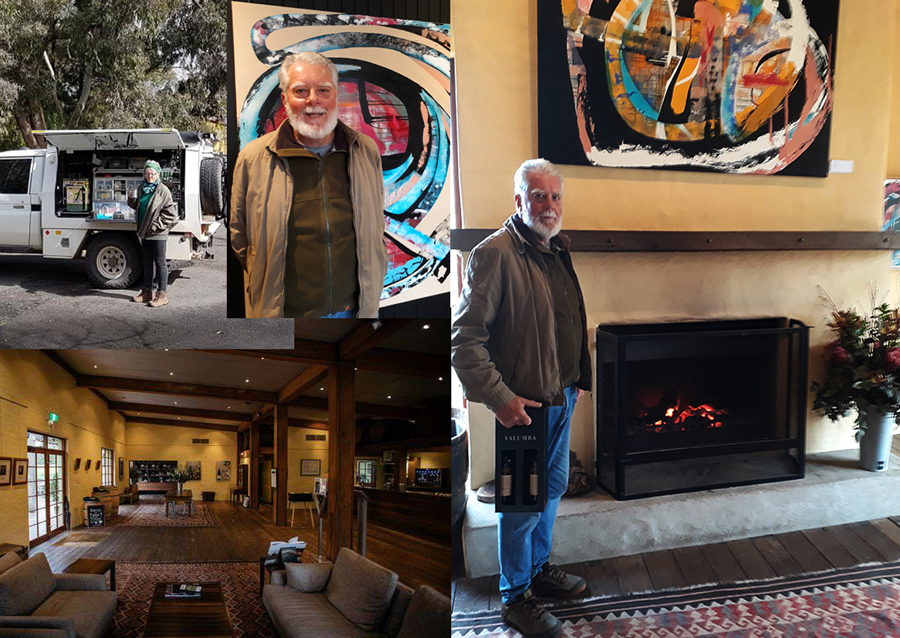 We opted for a hearty BLT lunch from our Turtle rather than the pricey pickings on sale in the Wine Room; Ken stands with his precious tawny under the abstract artworks Yalumba commissioned from Marnie Wark. 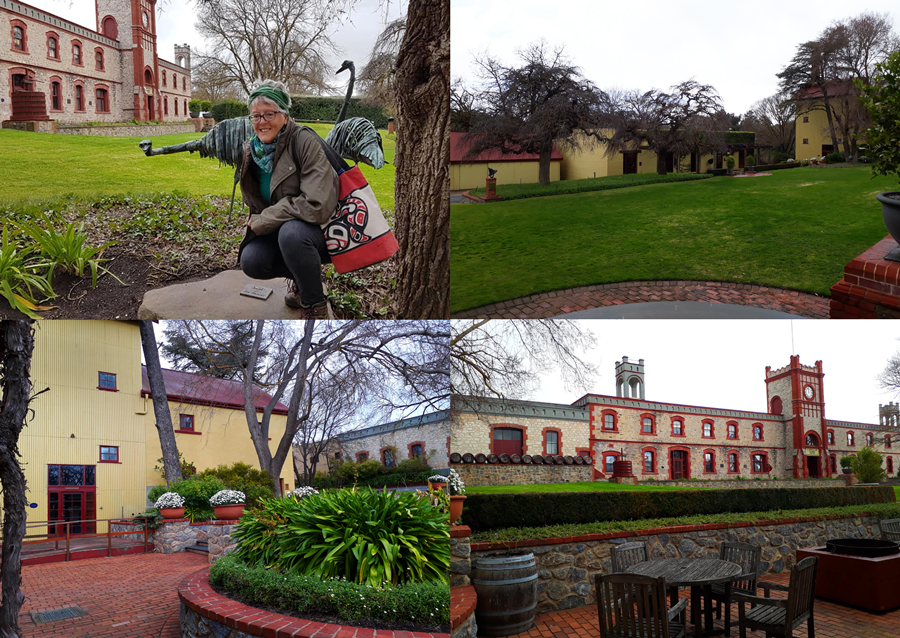 The clocktower (main administration) building and other architectural delights at Yalumba. 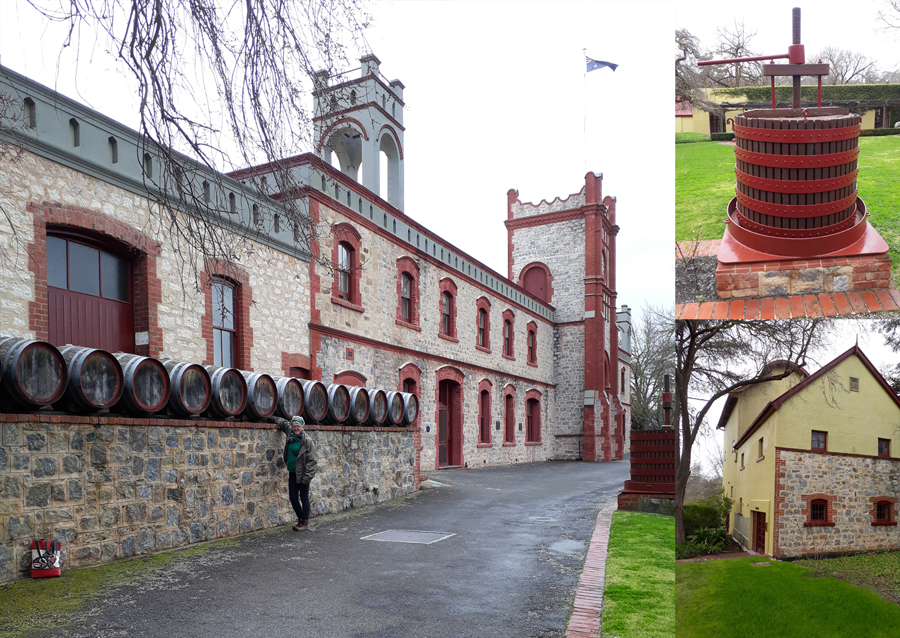 Shoving some Brian between the oak barrels outside Yalumba’s famous clocktower building; a wine basket press; another of the colourful outbuildings in the winery’s landscaped gardens.