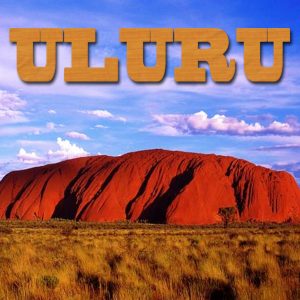 The ‘wide brown land’ has never done it for me. When Brian would say we’ll have to see the Red Centre I’d answer “Mmm…” and think “Why?” Images of Uluru and other desert formations looked interesting in pictures and I did think it would be worth flying in for a couple of days sometime to check it out, but the downside of flies, heat, dust and an endlessly flat horizon did not make it my favourite on his bucket list.

Ken’s a wilderness freak and after his 2016 trip through the Simpson Desert, riding in the support vehicle on a four-week fundraising trek that included the Madigan Line and remote Geosurveys Hill, he would show me photos, convinced I’d also find its contrasts fascinating. But his snaps, while photographically impressive, only confirmed its monotony. I would be happy to wave him off on any such adventures and just hear about it later but as we were going to Kangaroo Island anyway, why not swing by Uluru?

The dryness of outback NSW and South Australia was as expected but we did have some top camping experiences along the way, especially the free camps where we were completely alone in the vast silence. Those are not thoughts I ever imagined thinking, especially after Wolf Creek reinforced that roaming serial killers are as common as crows, but I enjoyed the isolation and peace so much I started to unclench about this whole being-in-the-desert thing. Winter meant we didn’t have to battle with bities and heat and we ran into maybe three flies the entire way. But nature wasn’t altogether kind… a spiteful dust storm tailgated us from Uluru and then cleared, only to be lying in wait at Erldunda, and the nights were bone chilly. We padded up like the Michelin Man and inside the tent (at least until our bladders demanded we crawl out of our toasty sleeping bags) was snug. And when the weather was compliant, nothing could beat the pure relaxation of wine and music and a Kenny by the campfire.

Tourism might still ruin The Rock. Climbing it is discouraged but won’t be outlawed till October 2019, and while signs ask that visitors respect and not photograph nominated sites, not everyone takes notice of these simple requests. We could not imagine how crowded and noisy it would be in peak season but when we were there the pushing and chattering and buzzing of segways was intrusive enough. Fortunately most of the boorish didn’t blunder far from the carpark; once they’d caught a few poses with their selfie sticks they’d done what they came there to do.

We walked the 10.6km around the base and the intriguing colours and light and shadow on the rock face made it worth every step. As well as seeing this grand monolith up close, I had two missions: to deposit some Brian somewhere inoffensive, and to find ‘the place of many heads’, where a friend had hidden me something on her outback trip a few months before. Ken’s not really into these hunts but as always he indulged. A guide explained that the ‘many heads’ was Kata Tjuṯa – aka The Olgas, a group of large, domed rocks 38km to the west – where we would be walking the next day. A planned sunrise helicopter ride that would have included an aerial view of them was subsequently cancelled due to the crazy weather.

About a third of the way into our base walk, just before we reached the Kuniya Piti area at the far eastern point, a small collection of boulders a few metres from the main one beckoned. They’d obviously crumbled away ages ago and it just felt like the right place for Brian. We waited for a few ramblers to move on and then I positioned him in a good spot to watch the changing spectrum of the sandstone, at least until the wind would swoosh him away. Despite the weather we got a heap of calendar-worthy photos but disappointingly the famed Uluru sunrises and sunsets didn’t happen at all during our stay.

At Kata Tjuṯa some more fiendish gusts and rain dampened any thought of walking the Valley of the Winds. The water on the rocks was mystically vivid and with a less yobbo species of tourists, there was nothing obnoxious to jar the splendour. While Ken and his camera attempted to capture it all I ambled up the road and poked around the long-grassed verge till I found the prize Kim had buried. This sort of hunt is a bit clunkier than geocaching but deciphering the clues is fun and I love the roving connection with friends.

I still don’t love the outback though. It does have a rugged kind of beauty and I’m glad I’ve been there… but I won’t be rushing back for a second look. 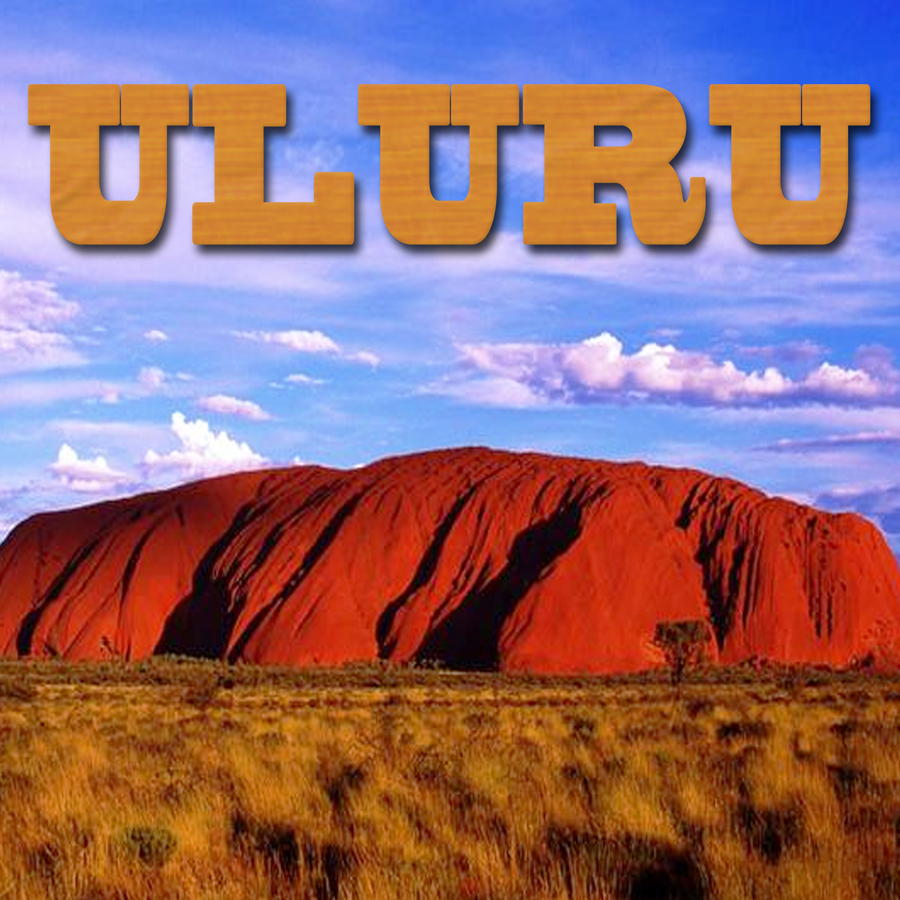 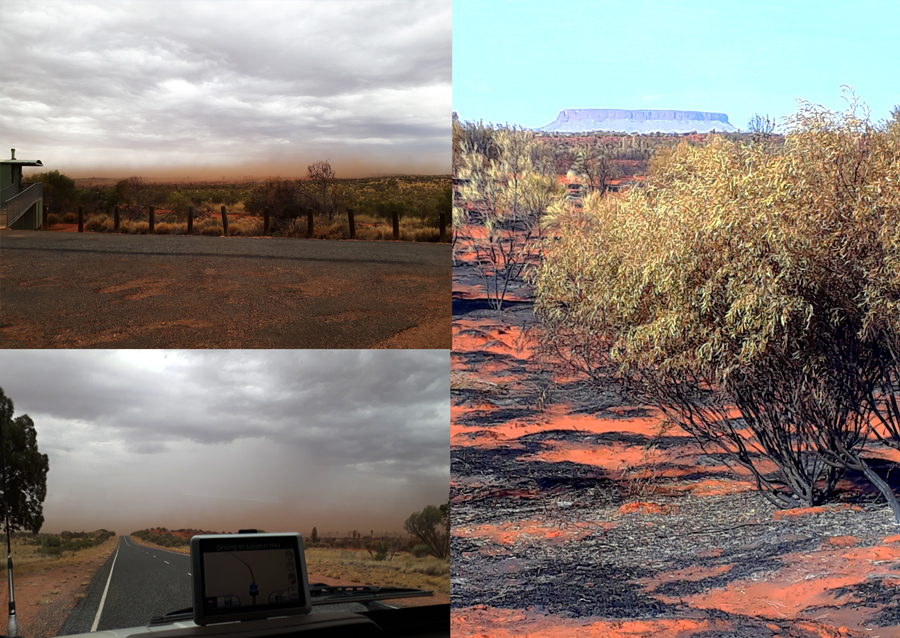 Colours of the outback – the red dust storm that followed us down Lasseter Highway; controlled burning of invasive buffel grass, a threat to the natural biodiversity and hydrology of the landscape, with Mt Connor – which Ken manipulated my gullibility into believing was Uluru (“No, it is… it just looks different from the back.”) 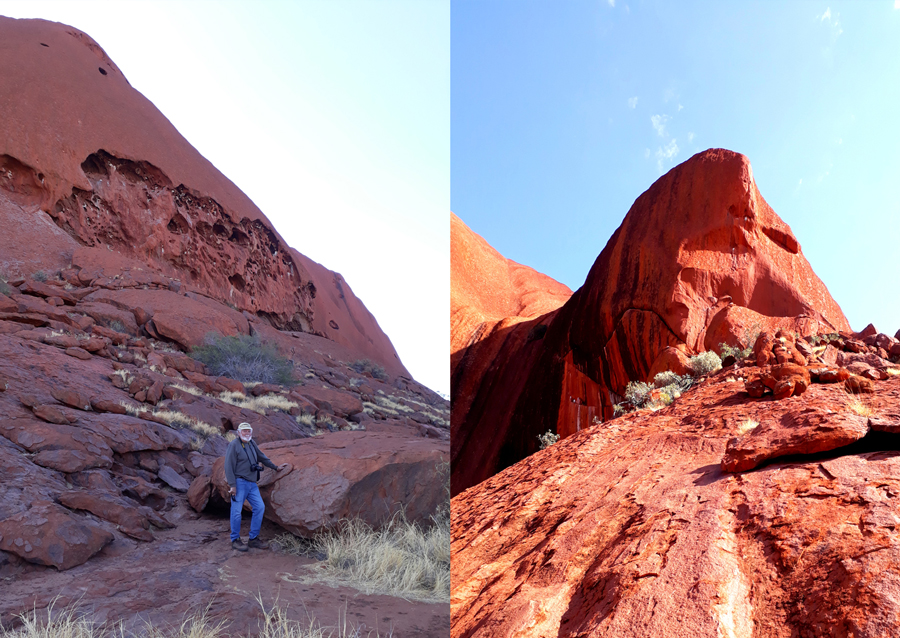 Different colours on the surface are due to the oxidation (or rusting) of the iron-bearing minerals within – the older a section of the Rock, the more red, and the blue-grey tinged rock is younger. 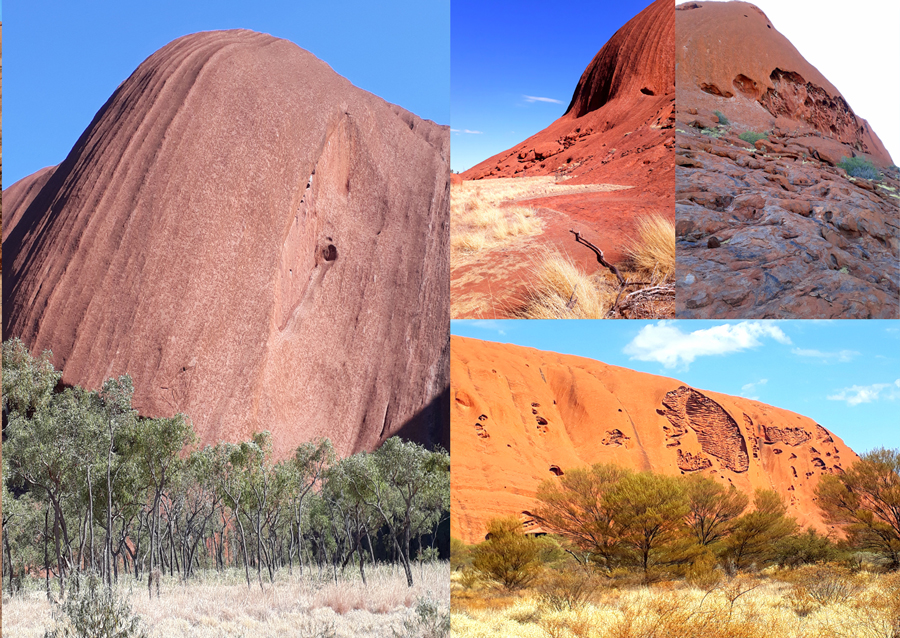 Some of the eroded surfaces look like faces – or an Asian elephant head (left) – depending on the light and the angle from which you’re viewing them. 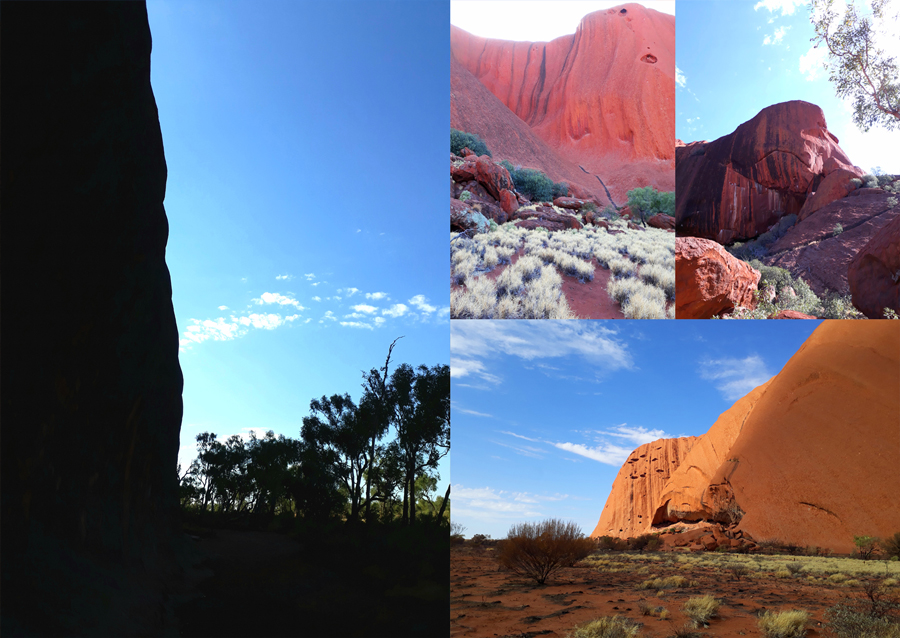 The Uluru base walk winds through acacia woodlands and grassed claypans, and the scars and indents on the Rock along the way tell Dreamtime stories, according to the Anangu, Uluru’s traditional owners. 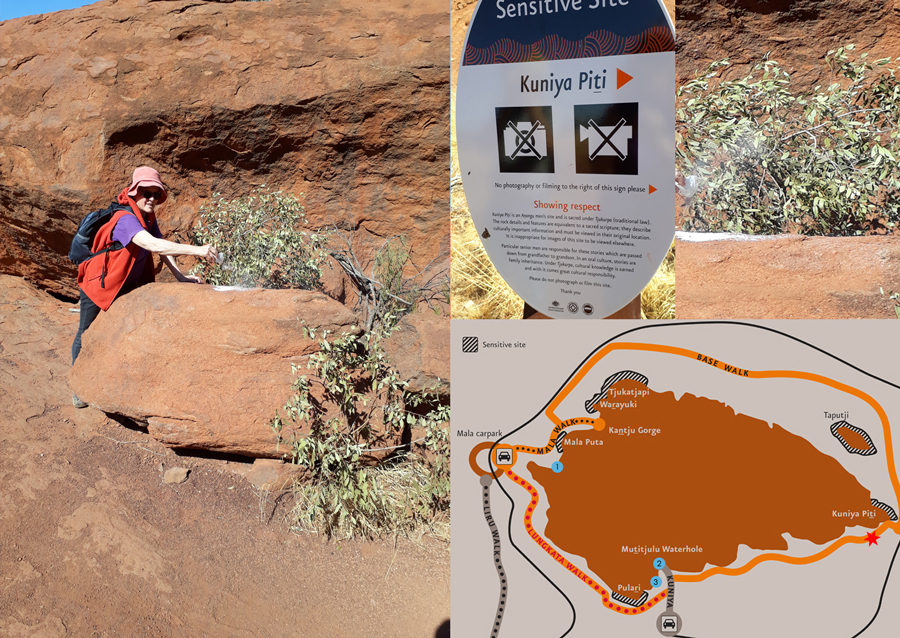 Brian’s drop spot was not far west of the Kuniya Piti, a few metres from the Rock itself. 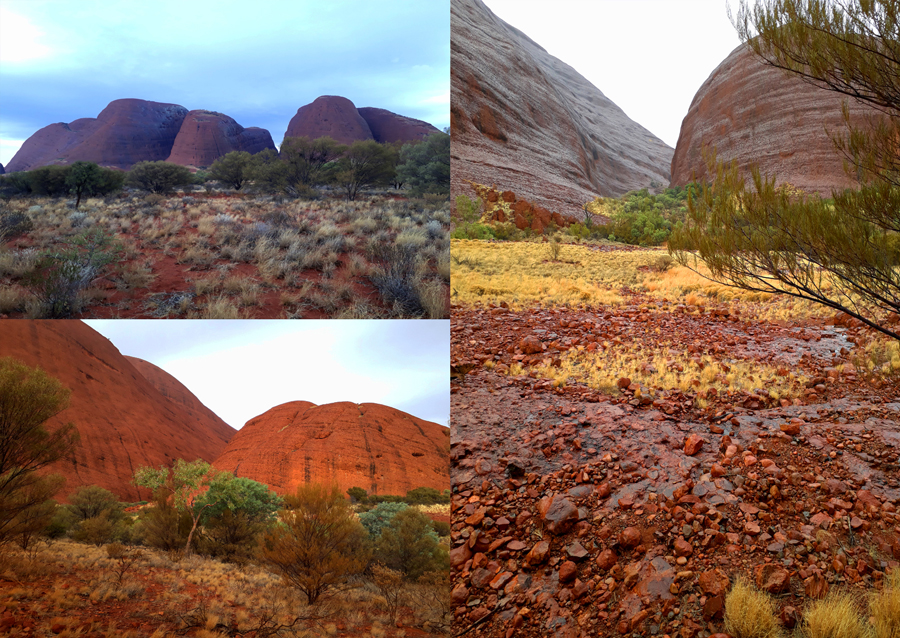 As impressive as Uluru was, Kata Tjuṯa (the Olgas) looked a hundred times more colourful that day. 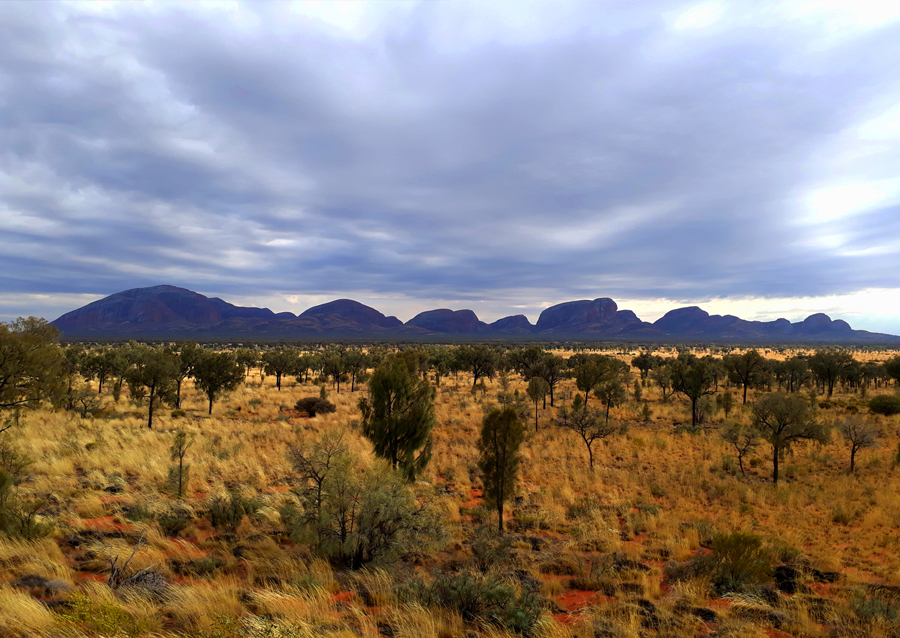 Kata Tjuṯa from the viewing platform. 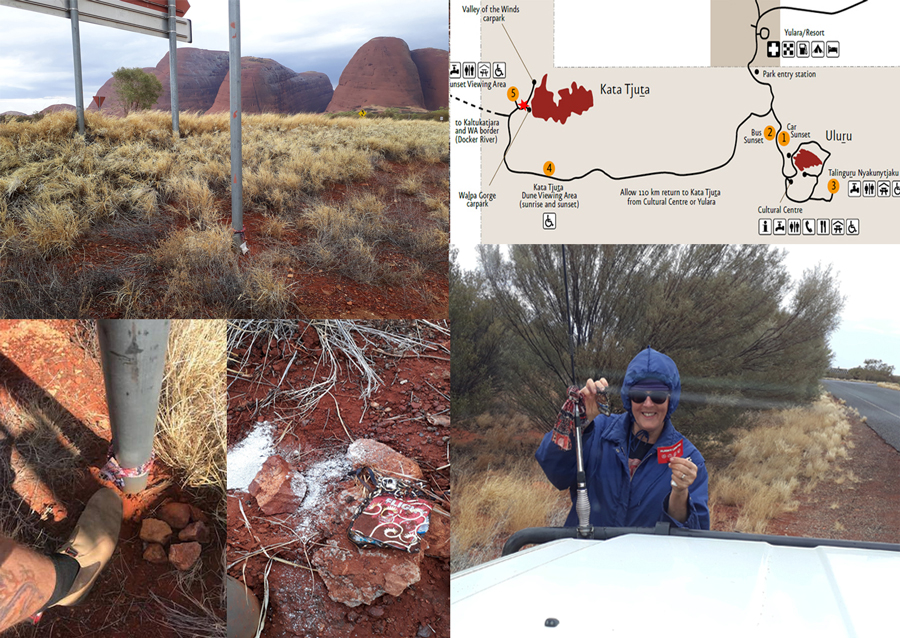 The treasure buried by Kim, Drue and the kids back in April on their outback trip, was replaced with some of Brian’s ashes. 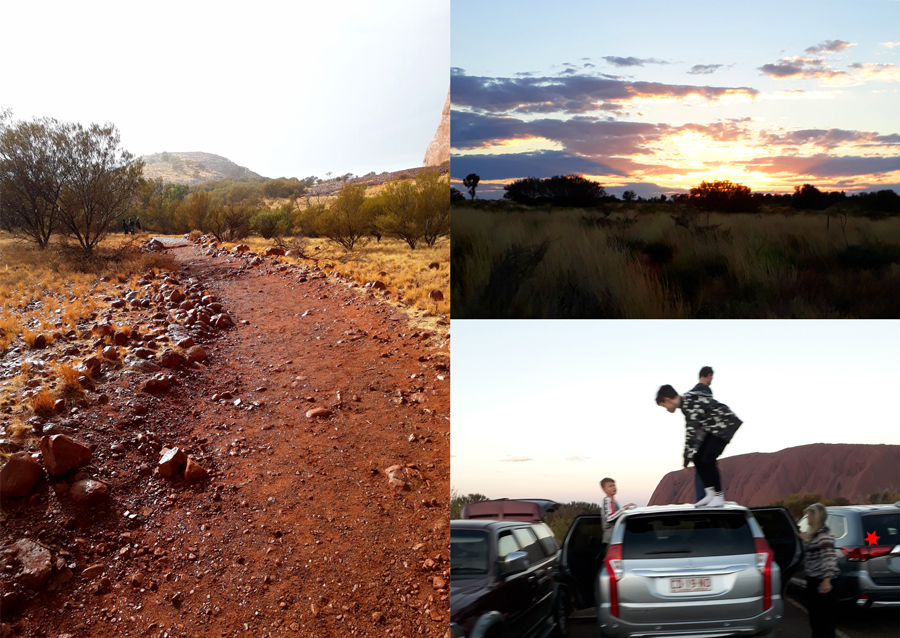 The Valley of the Winds trail that we walked… or started to. A watery sunset that was the closest we came to the magnificent ones we’d heard about; some other disappointed tourists at Uluru’s Sunset Viewing Platform.