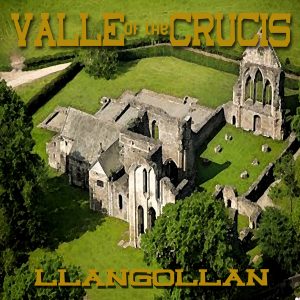 Photography was one of the last pleasures Brian let go and attached as he was to his cameras and bits, he made efforts to give some of them away before he died. Some of it I still have but it’s likely that only his beloved digital SLR will ever be used again. I schlepped it to Canada in 2015 and though the quality of its photos was unsurpassed, the ones Alyssa took with her phone were entirely adequate… and way more conducive to my carry-on-only ideal. When I travel overseas now the big fella stays at home.

One of Brian’s best shots, for many years hanging on our living room wall, was of Valle Crucis (Valley of the Cross) Abbey in Llantysilio in Wales. It showed the ghostly ruins of the Cistercian monastery mirror-imaged in the adjacent fishpond and he was so proud of the impressive and peaceful picture he’d captured. Unfortunately it had been printed on low quality paper that eventually wrinkled inside the frame but he never got around to reprinting it – or better yet, revisiting north Wales and updating the photo. We’d only got to see the south around Abergavenny on our ’09 trip so the Abbey was nominated for the V on his ashes list.

Since moving to London in 2017 Sam had done Europe many times – a fact that would have thrilled his well-travelled dad – but he’d never been to Wales until we hired a car and took three days to knock over most of the UK ash drops. We drove up to Denbighshire and the community of Llangollen, which straddles the Dee River not far from the Abbey, and munched on our Oggie Shop goodies while we strolled over the 16th century stone bridge and around the riverside. It would be much prettier when spring fully bloomed but was still a sweet little town, with its vintage railway and quaint shops. The Casrell Dinas Brȃn up on the hill, the Eglwyseg limestone escarpment and Clwydian Range (we didn’t even try to pronounce those diabolically spelled names) made a splendid backdrop.

I think Brian would be a little let down by the Abbey though. The pond is still there at its eastern end and still reflects the scene in much the same way, but thanks to a tourist park that extends right up to the outer walls on three sides, the appealing solitude of those skeletal ruins is somewhat spoiled. The Abbey is designated an ‘open visitor attraction’ and the day we were there it had free and unsupervised entry (an off-peak deal), though the grounds are well kept and not blighted by graffiti or littering. Even so, photos had to be angled and cropped to avoid getting caravans in the background and I think it would be a bit like a theme park in the summer months… certainly a lot harder to imagine the wild and lonely place of 1201 when it was built by Madog ap Gruffydd Maelore, Prince of Powys Fadog (not sure what that translates to but it has to be the coolest title ever).

These ‘choir monks’ believed they could only get closer to God by focusing on devotion and distancing themselves from civilisation and its temptations. But even the 24/7 faithful need regular watering and feeding and so the Abbey also housed (separately) ‘lay brothers’, prayerful-but-pragmatic chaps who maintained the buildings and farmed and fished enough to keep everyone alive. Perhaps it was their influence – or majority rules (several of the monks were lost to the Black Death in the 14th century) – but that orthodox austerity was relaxed over time and by 1535 the Abbey ranked as the second richest Cistercian monastery, with a comfortably heated suite for the abbot and guest quarters for visiting poets. Not everyone was impressed and the complex’s structural integrity was tested by war and fire and revolt, its buildings often needing restoration.

In 1537, when Henry VIII’s Suppression of the Monasteries order took effect, it was disbanded along with other convents, priories and friaries, and its assets appropriated. It eventually fell into disrepair but while much of its ancient walls have collapsed, several sections and their symmetrical detail are still intact, eight centuries on. Regardless of how different it might be to Brian’s memory, we were impressed at its durability and scattered him around the rectangular cloister and remains of its cruciform church, and at its formidable front door below the mandala-like ‘rose window’. Caravans – too many; rabbits – nil. 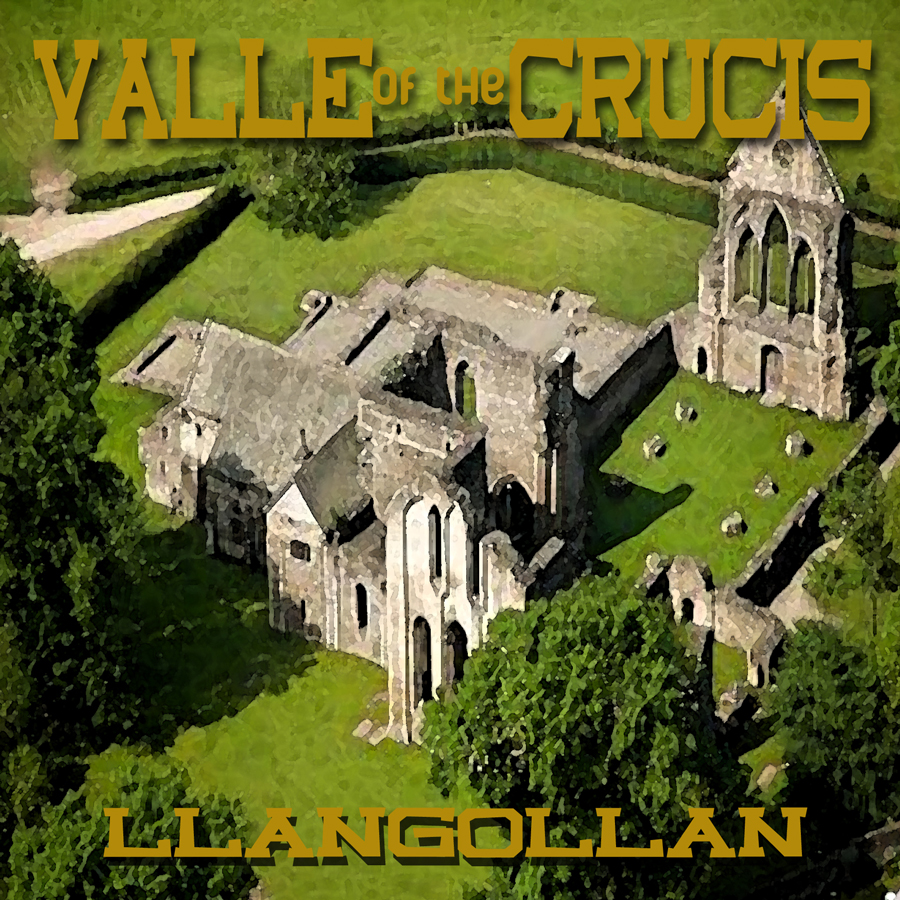 Valley of the Crucis (Llantysilio, Wales) 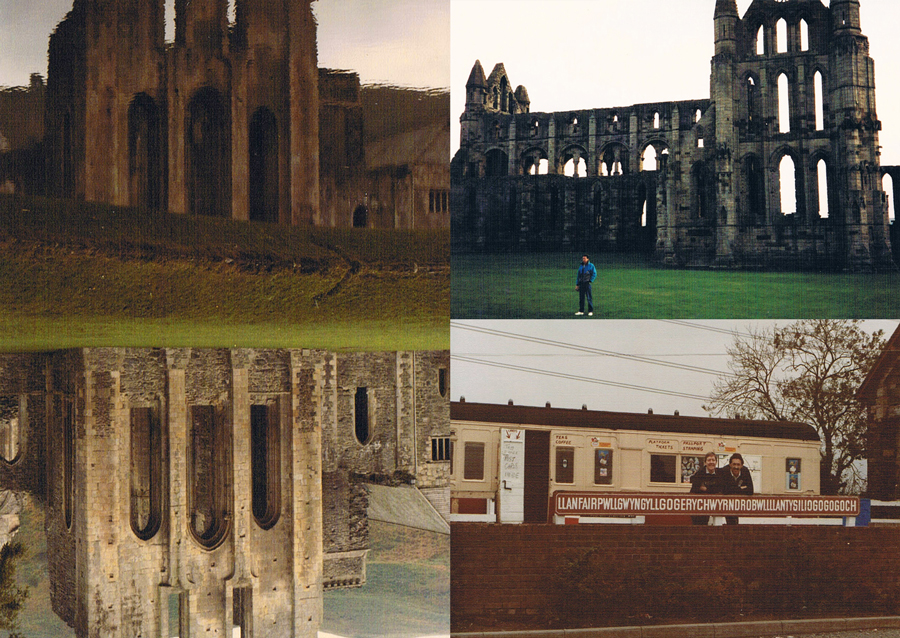 The reflective photo Brian took on his visit to Wales in the late ’70s; outside the Abbey… as it was; Brian and his first wife, Jennifer, on that trip. 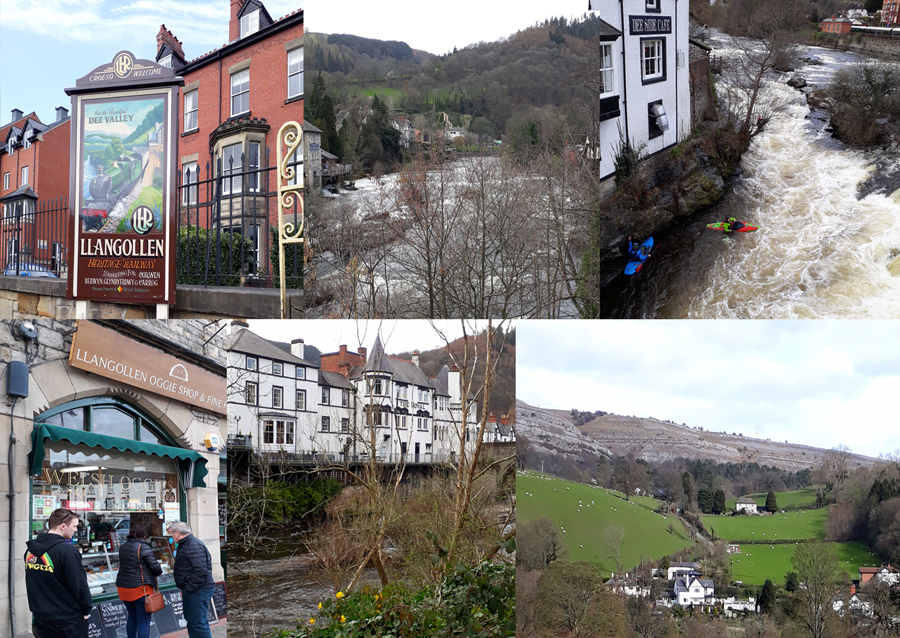 Around the town of Llangollen. 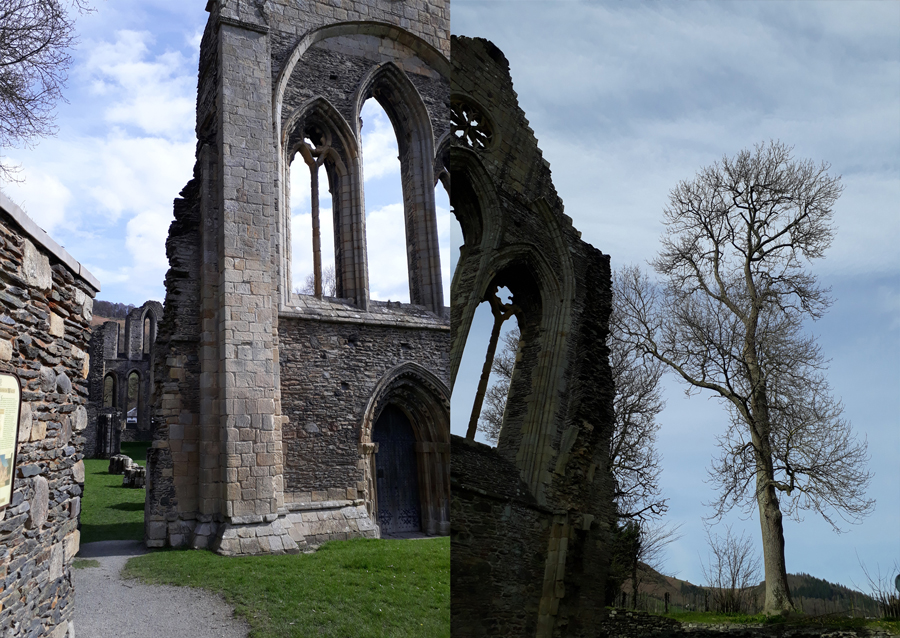 The Abbey from a couple of different angles. For the austere Cistercian monks, who lived by The Rule of St Benedict, its remoteness would have been perfect. 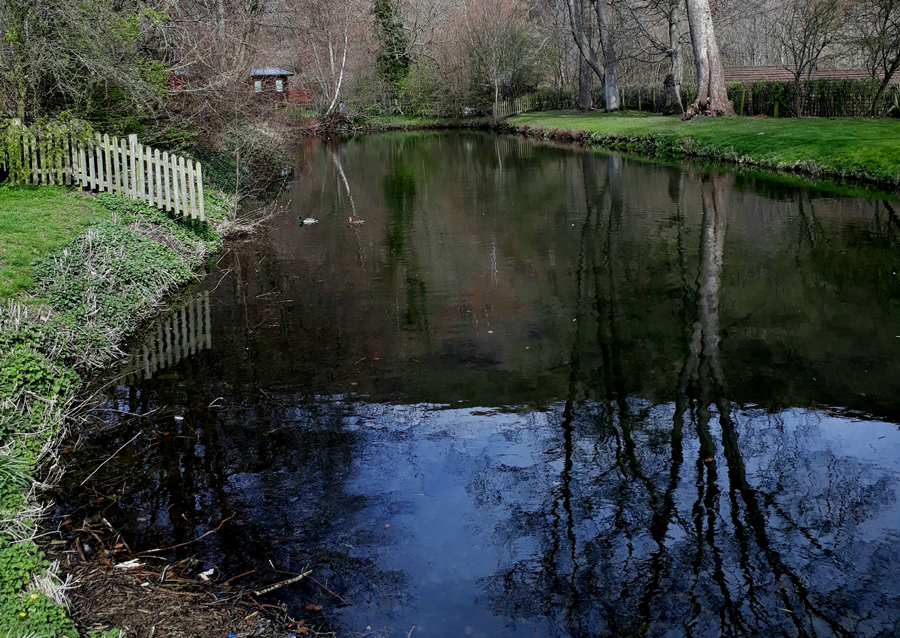 The reflective pond was originally the monastery fishpond. 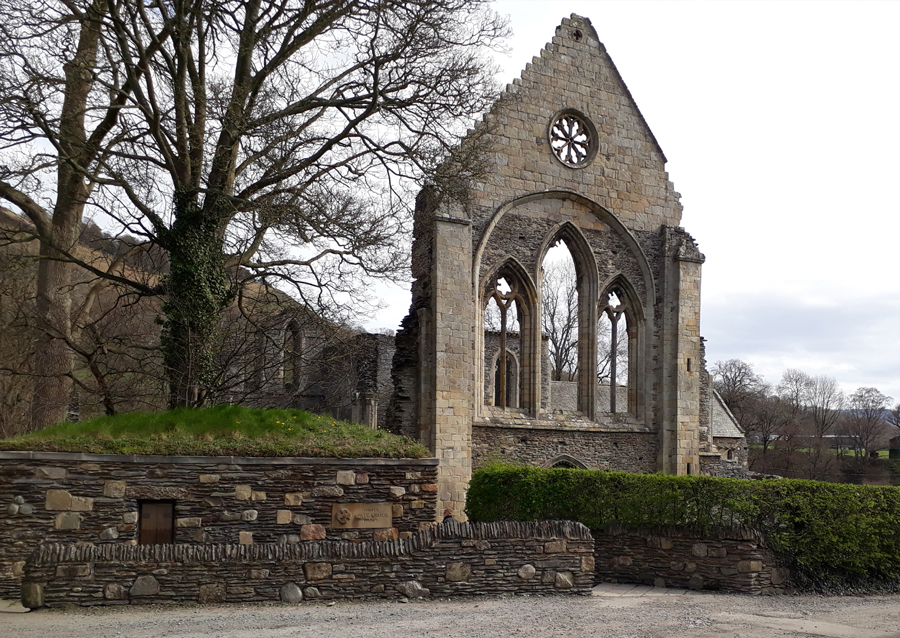 The entry to the ruins, which are managed by Cadw, the Welsh government body that caretakes sites of historic and cultural significance. 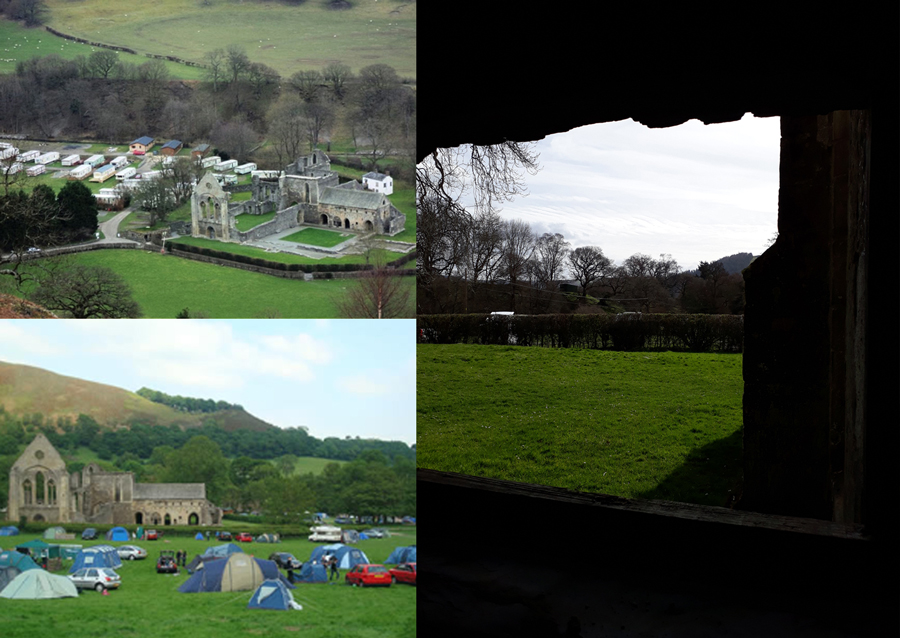 The Abbey Farm camping and caravan area [from the www.theabbeyfarm.co.uk website] and a view from the ruins that shows the proximity of the holiday park. 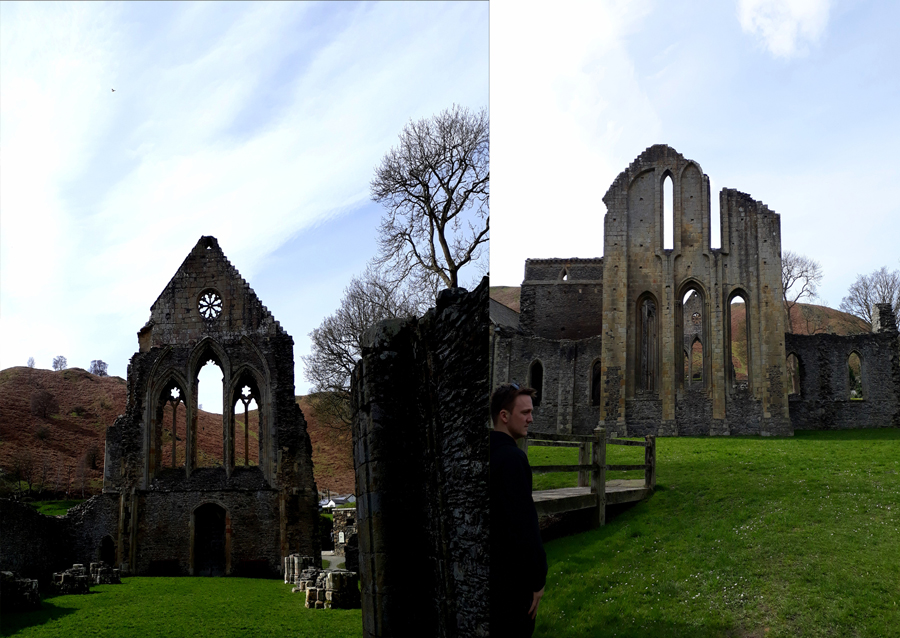 Further views of the ruins. 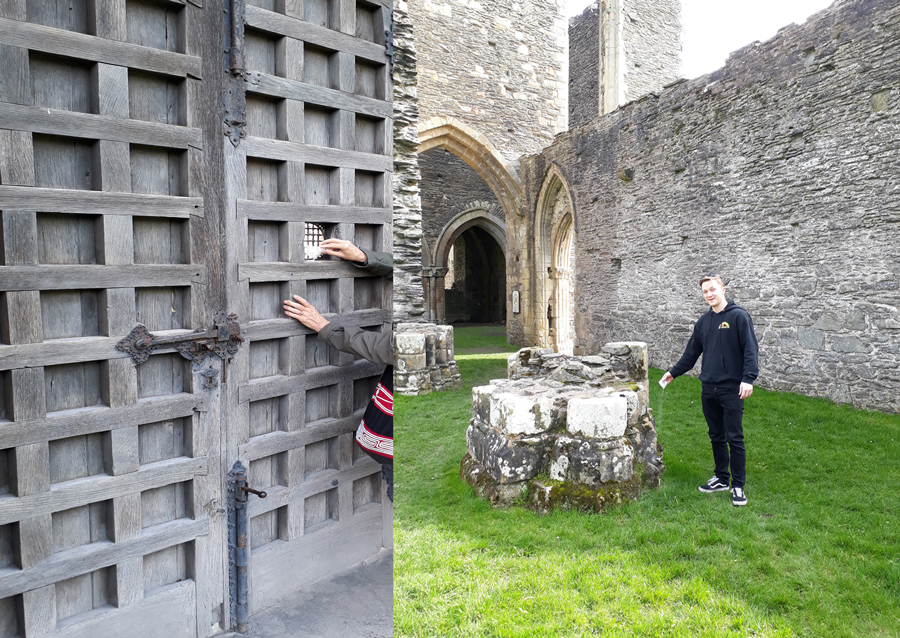 Brian returns to the Abbey.