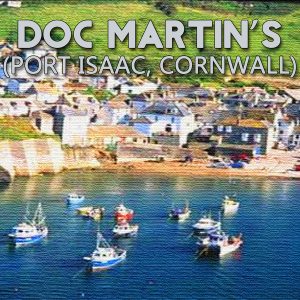 If we’d been waiting for some inspiring final words, Brian was not about to oblige. The last thing he said was in response to my “James Garner died… you remember him?” I’d been reading out bits from the local paper but didn’t really expect an answer – it was more about me convincing me that death wasn’t near, despite the sombre faces and ‘Palliative Care’ over the door. He’d been in and out of consciousness for the afternoon, ever since the nurse sedated him against the agitated hallucinations and struggling, but his whispered reference to that ’70s cop drama said our boy was still in there, and listening.

He hadn’t watched much television before his health tanked but once housebound, his favourite shows became a support beam in the framework of his day. Books and even movies took more focus than he could manage and he’d stopped trying to do the Herald crossword, instead just reading me the clues and checking my answers. He’d write lists, monitor his TAB account, nap, film messages to the family, and mark up the TV guide. These all-important rituals gave him somewhere to go in his shrinking world.

The Virginian usually began his day and, whenever it aired, Doc Martin was his evening series-of-choice. Brian had been to Cornwall 30-something years before and had a special fondness for “the feel of the place”. We never made it to that part of the UK on our 2009 visit so he added Port Isaac (Doc Martin’s Portwenn) to the bucket list. The small fishing village in the north of the county has been a popular shooting location for other films and TV series… the original Poldark (1975–77), Oscar and Lucinda (1997), Saving Grace (2000) and Fisherman’s Friends (2018). But it’s best known for the quirky, character-driven comedy starring Martin Clunes. Portwenn’s villagers might be cartoonish, but Brian’s memory held they were a fairly realistic depiction of some of the Cornish people he’d met.

After three days with Sam and Liana in Fulham I was still fuzzy on getting round London, but it was a doddle compared to the multi-leg trip to Port Isaac and back. “Take Blue Flash from Bodmin” seemed simple enough (except the bus was red) and I was further flummoxed by contrary directions at the Wadebridge interchange from two equally adamant women. This was clarified by a lovely man who apologised for his Tourettes, then barked out another “fuck off!” when I thanked him. There were train delays due to a body on the tracks near Plymouth –  an event that didn’t seem to interest anyone but me – and ambiguous street signs and roadwork detours that meant the ride finished at the top of a nameless hill instead of the promised Peapod Café. It surprised even me when I finally reached that familiar bay, but it shouldn’t have… with Sheppy on one shoulder (“If you want it badly enough my girl”) and Brian on the other, challenging me with his scepticism, I usually get where I need to go.

Low season meant few tourists but oh to be there a week later, when shooting for the ninth and final season was due to start and cast members would be on set. A few locals express dismay with the inconvenience of film crews but most accept that the tourism generated is as vital to the village economy as its traditional fishing and crabbing industry, and there’s a heap of Doc Martin merchandise for sale. Mrs Tishell’s Pharmacy is a gift store, Bert Large’s restaurant is a private residence, the Ellingham house and surgery – aka Ferntree Cottage – is a popular short-term rental… but The Golden Lion pub, the garage and the church all operate as on the show. Ash drop ops abounded, and I took advantage of the quiet to scatter Brian in several locations.

He made his mark on the stone steps at Ferntree Cottage, the fence outside Bert’s, the windowsill of Mrs Tishell’s, the village phone booth, the stream beside the boat ramp, and in some rusted chains and anchors on the shingle beach. The evening before I’d taken the scenic coast path down to The Golden Lion and, fiendish Atlantic wind aside, it all felt so authentic, comfortable and surprisingly safe. The return walk… not so much. But even alone on a clifftop in the blackness, I understood that Cornwell feel Brian talked about.

As for the people, kind hearts were everywhere. The locals might be less relaxed once the season gets busy but I got to appreciate the warmest of service and hospitality. Complimentary goodies, genuine interest, contacts to ensure I got the most out of other regional must-sees (that I unfortunately didn’t have time to follow up) and when it turned out the return trip would be three bus rides just to get back to Bodmin, my cheery B&B host offered to drive me. It was only when I was back in the city, clutching my Oyster card and holding up queues as I dithered over platforms, that the charming feel of Port Isaac started to wear off. 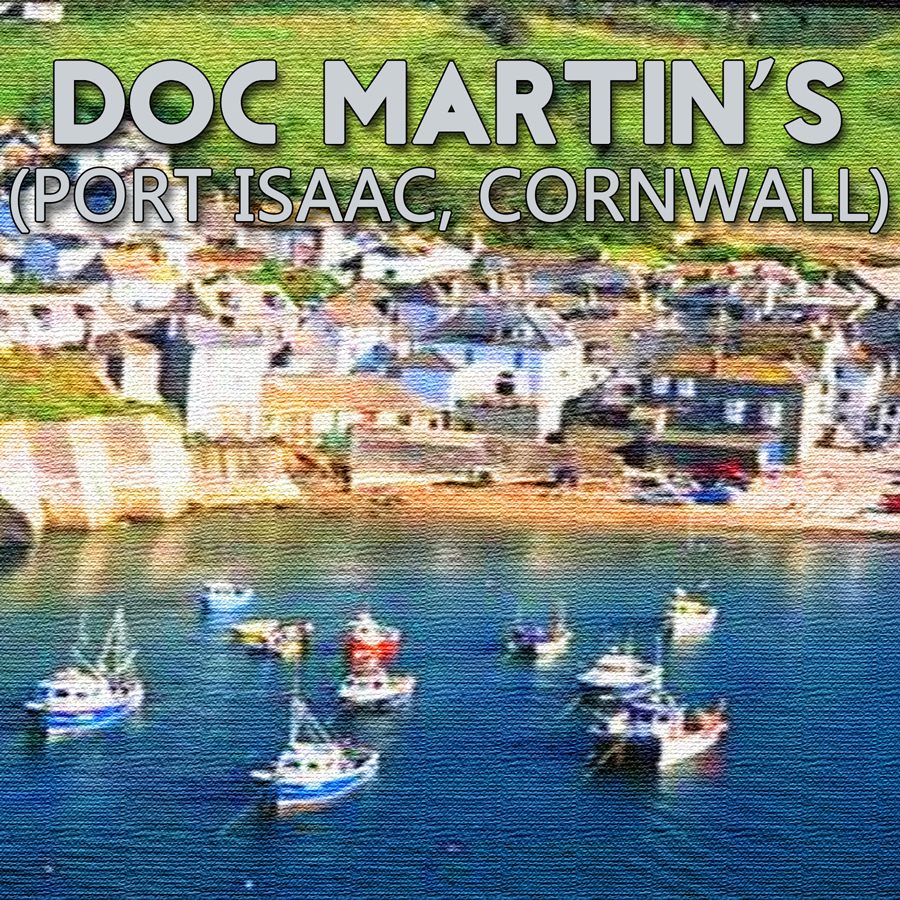 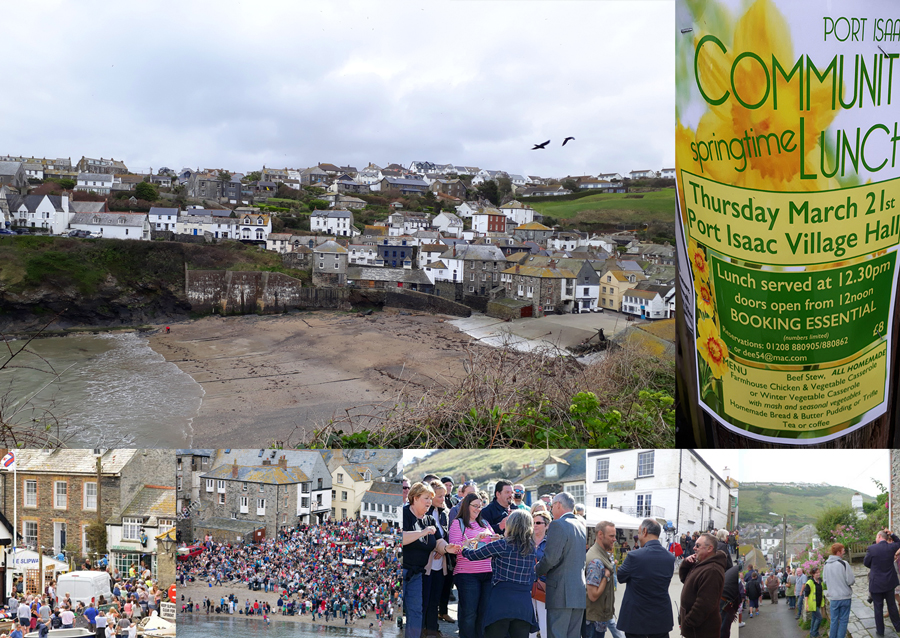 Port Isaac – from the Cornish Porth Izzick, meaning ‘corn port’ – has a strong community focus, but its population of 700 swells in the high season and when Doc Martin is filming, as coachloads of fans make the pilgrimage to the village. The crazy-busy tourism has economic benefits of course – as well as The Doc Martin Community Fund receiving royalties (about £100,000 to date) from the show, cast member Ian McNeice charges tourists for photos with him and donates the proceeds (£2,000 so far) to the National Lifeboat Institute. 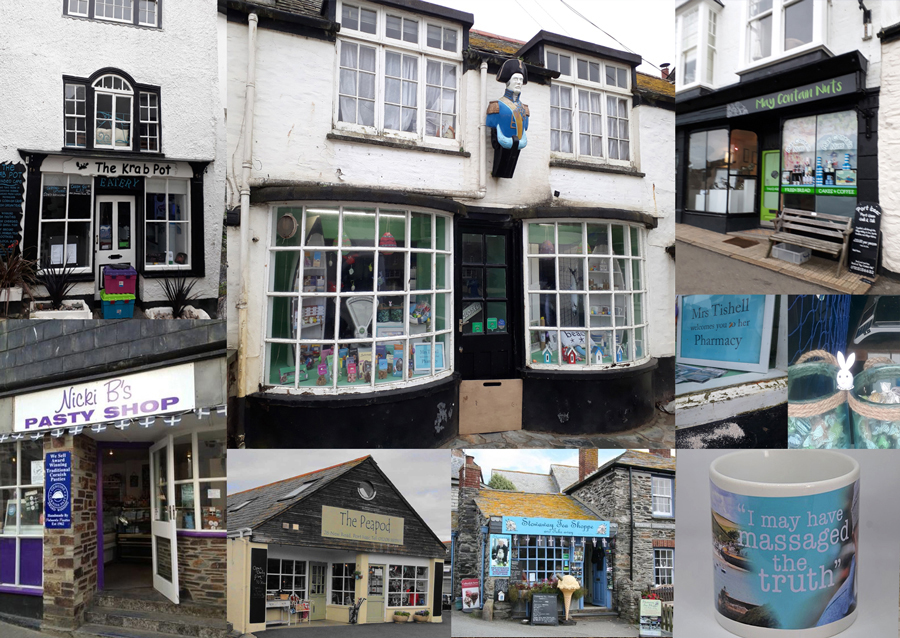 Like many small villages, Port Isaac no longer has a bank, post office, pharmacy, supermarket or newsagency – its retail economy is based on tourism with eateries and gift shops the main traders, and businesses often have to rely on the profits from the summer trade to stay afloat in the winter. 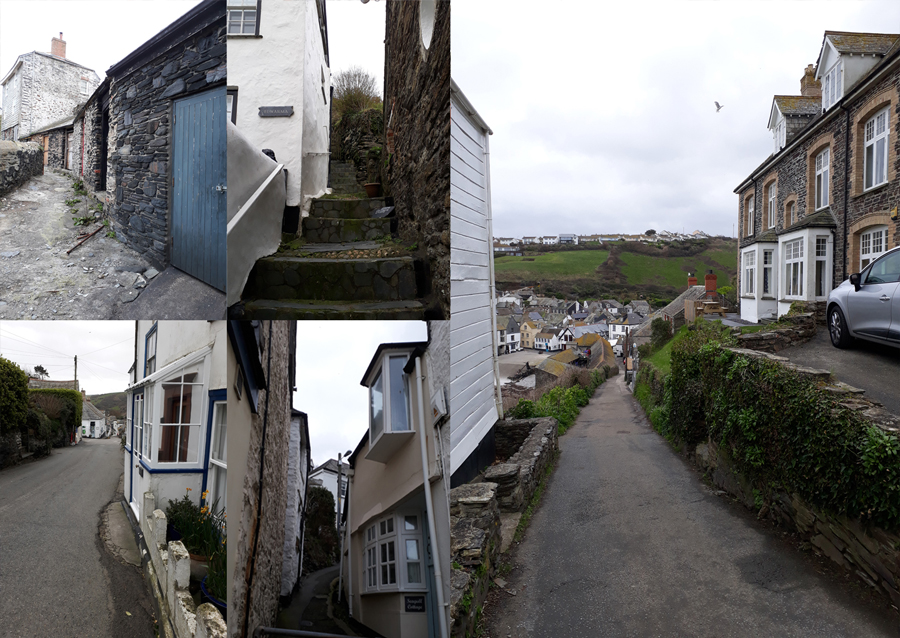 The village is known for its steep, winding streets. Its Temple Bar Alley (renamed Squeezy Belly Alley in the 1950s) is only 18 inches wide in places and the 1978 Guinness Book of Records named it the world’s narrowest thoroughfare. 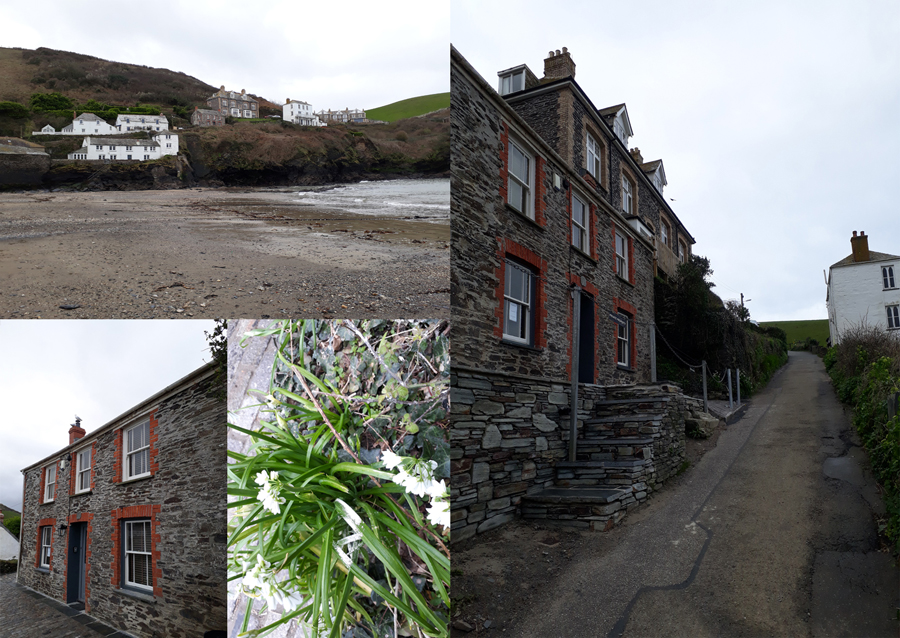 Ferntree Cottage, Doc Martin’s home and surgery in the show, is the small one halfway up Roscarrock Hill that overlooks the harbour. Brian’s in its steps and among the flowers. 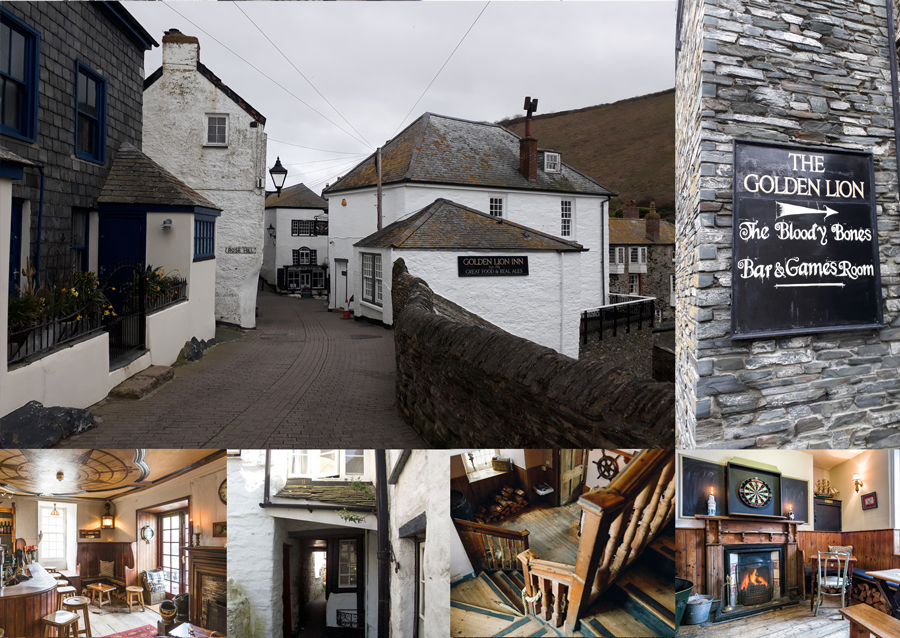 The Golden Lion is a cosy 18th century pub with great camaraderie and soup. Its Bloody Bones Bar boasts a smuggling tunnel leading down onto the causeway on the beach. 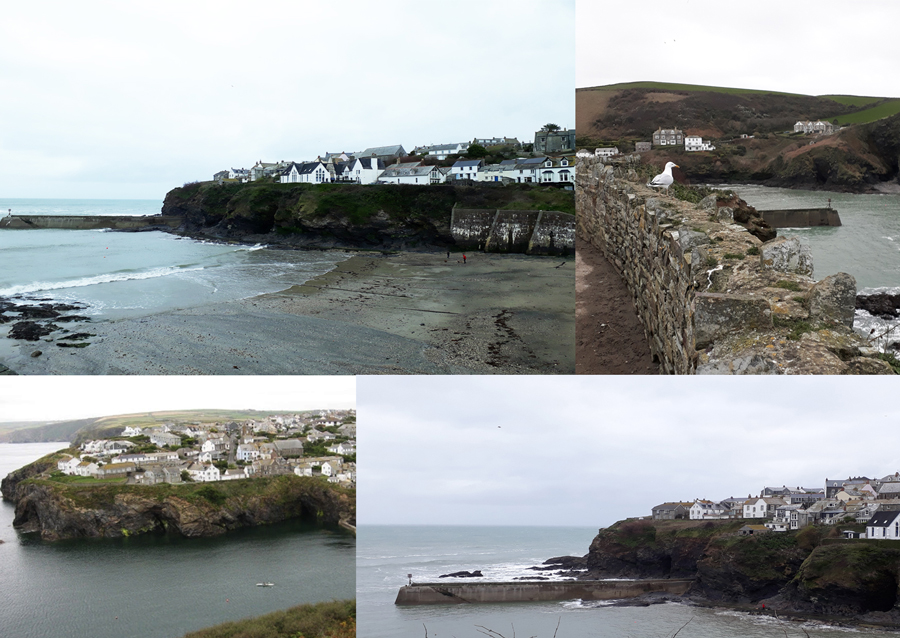 The SW coastal walk, a scenic alternative to the narrow streets of the village, winds around the clifftop towards Port Gaverne. The village pier was constructed during the reign of Henry VIII and in the centuries since the port has handled cargoes of coal, wood, Delabole slate, limestone, salt and pottery, as well as the yields of a busy fishing industry. 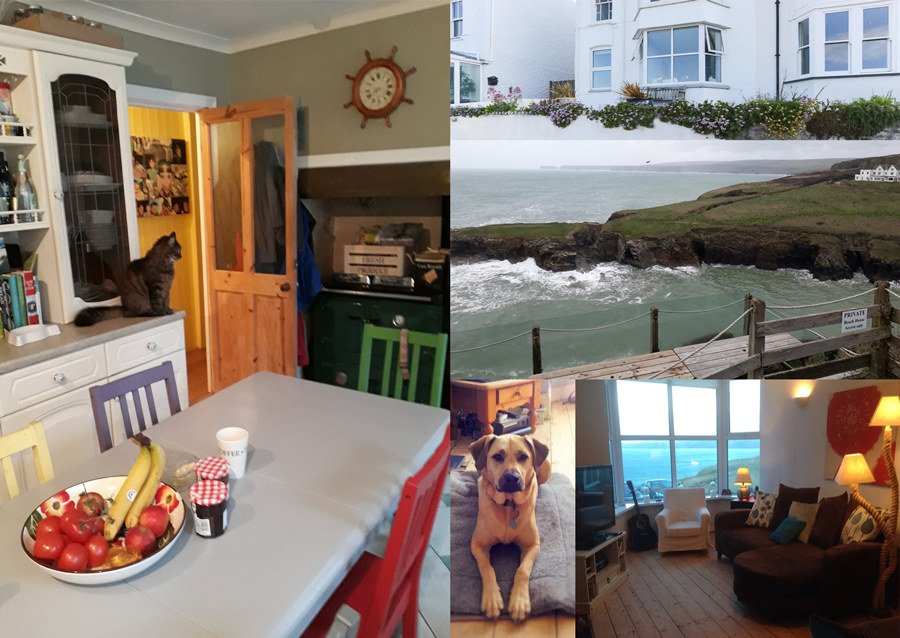 The charming Seaview B&B – ruled by Saffie the dog and the cat whose name I forget – was a great base for exploring the village. 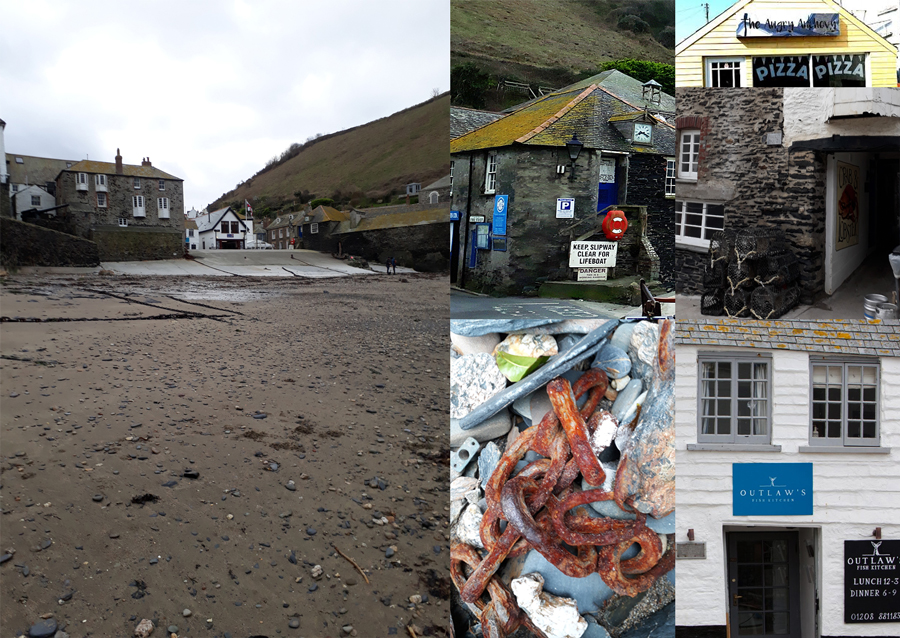 Since the 14th century fishermen have landed their catches of pilchards, crab and lobsters and the village has a distinctive (but not off-putting) fishy smell. In 1933 the old lifeboat station was closed and in 1966 the village acquired a new inflatable inshore lifeboat. 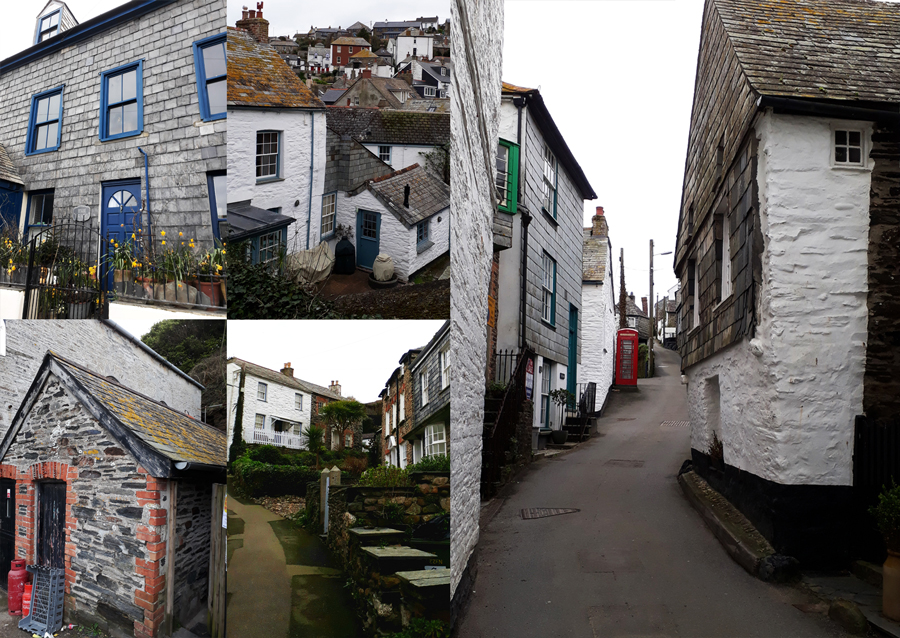 Much of the village consists of traditional white-washed cottages and granite slate fronted houses, and there are about 90 Grade II Listed buildings of architectural or historical importance. The average house price is more than £400k.