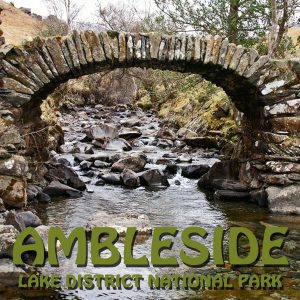 Butting heads was a hobby of ours and even when we’d agreed to disagree, it was usually only because one of us got distracted and lost interest. Concede nothing; compromise is for chumps.

With cancer came perspective and the ‘Do you want to be happy or do you want to be right?’ approach sort of made sense. Sometimes my head still thought “Screw you” but letting stuff go and giving Brian a free pass no longer felt like defeat. He needed his fighting energy for a way bigger battle and as each stage of that mongrel disease took more and more from his control, it hurt my pride less and less to let him have his way. Mind you, we couldn’t let go of bickering completely… but I figured he still needed some spark. ­­

Nine months after we got a tentative “all clear” and were holidaying in the UK, he literally took the wheel of our itinerary and we were all ok with that. Sam was travelling with the football squad but Ben, Dan and I were happy to go where Brian wanted to go. We rejoined the team for a couple of days at Nottingham then Aberdeen before the tour wound up. Sam left the bus there and we all packed into our hire car for the drive back to London.

Cramped confines aside, it was a trip with lots of laughs… though I was not impressed when those clowns recorded me sleeping and bluetoothed it to the car’s speakers to prove their malicious snoring accusations. We saw a bit more of southern Scotland and my wish to visit the Lockerbie memorial was indulged, though it only took a few spots of rain and the manbabies sooked about getting wet. No matter – Ben and I found the tribute to the victims of the 1988 terrorist bombing interesting and took our time getting back to the car… to some obvious tension that amped up as we got closer the border.

Dan was reminding Brian that he wanted to head east to catch up with an expat mate who’d moved there. Brian insisted that was impractical as we were going to Cumbria – ie west – and there was not enough time to do both. Negotiations stalled somewhere around Gretna… one car = one winner and as we three in the back seat listened to their equally rigid arguments, it was clear that resolution wouldn’t come cheap. A few more miles of the battle of wills – “I don’t want to be in England and not see him” vs “But your mother wants to see the Lakes District” (hey, leave me out of this) – and eventually our tight-lipped driver relented and turned off the M6 for North Yorkshire. Of course it wasn’t the last time I heard what a shame it was that we’d missed “the best part of England” but though his and Dan’s mateship suffered not, Sam’s and my visit to Ambleside now might redress any lingering disappointment.

Sam had been there not long before with Liana and had a few recommendations for eateries, but was open to seeing as much of the area as possible. We had a drink at The Crafty Baa and dinner at The Priest Hole, and after a comfortable night at Brathay Hall in Clappersgate, explored Ambleside and the market town of Keswick. Unfortunately I hadn’t done my homework or I’d have known that Keswick is the home of the Derwent Pencil Museum, tracing (pun intended) the history of all things pencil. As a kid I’d considered a set of 72 Derwent Superfines the Holy Grail, but I doubt Sam would have been able to maintain his humour if I’d insisted we visit a museum about it. Likely a rerun of the Brian-Dan standoff of 10 years ago.

I scattered Brian from a small wooden footbridge across Ambleside’s Rothay River. The bridge is dedicated to Bronwen Nixon, a popular local hotelier who was murdered by one of her guests in 1986. Again my research was found wanting as I didn’t know any of this when I chose the spot, but it’s been interesting to read about it since. Serial killer trivia is one of my things so I’ve been fascinated with reports that her murderer David Wynn Roberts had previously despatched another elderly woman. What doesn’t thrill me is the fact that these so-called “elderly” women were only three years older than me – and the same age as Brian. He’d no doubt be outraged to be described as such.

We did score a good bunny sighting with this ashdrop however as one particular rabbit features heavily. Beatrix Potter had lived locally, in the village of Near Sawrey, and there are three Peter Rabbit and Friends giftshops in the area, and the Beatrix Potter World family attraction. (I also learned that while many of the scenes for the 2018 movie Peter Rabbit were filmed in Australia at Sydney’s Centennial Park and Central Station, others were shot around the Windemere town centre.) 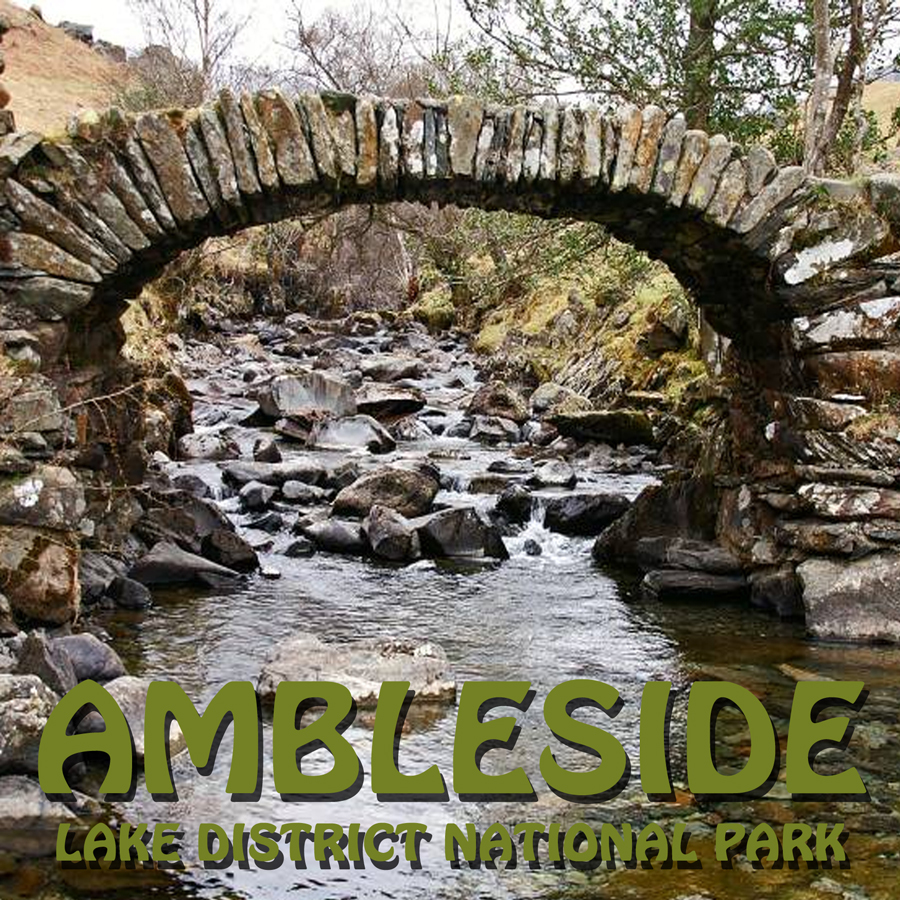 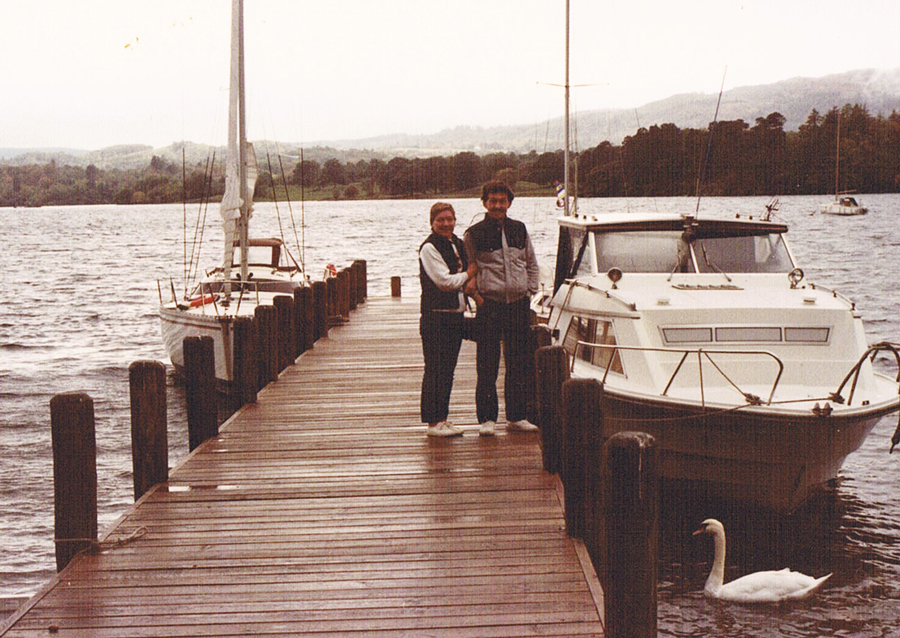 Brian and his first wife, Jennifer, at Lake Windemere in the late ’70s. 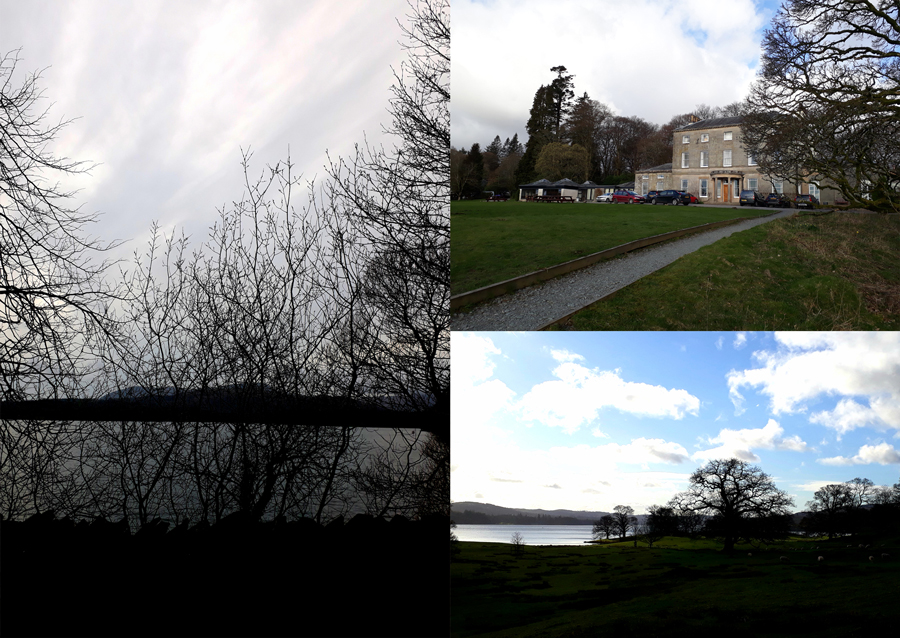 We stayed at Brathay Hall, a Georgian style country house built in the 18th century on 360 acres on the shores of Lake Windemere, not far from Ambleside. It is also the headquarters of The Brathay Trust, a youth skills training and development program that’s been operating since 1946. 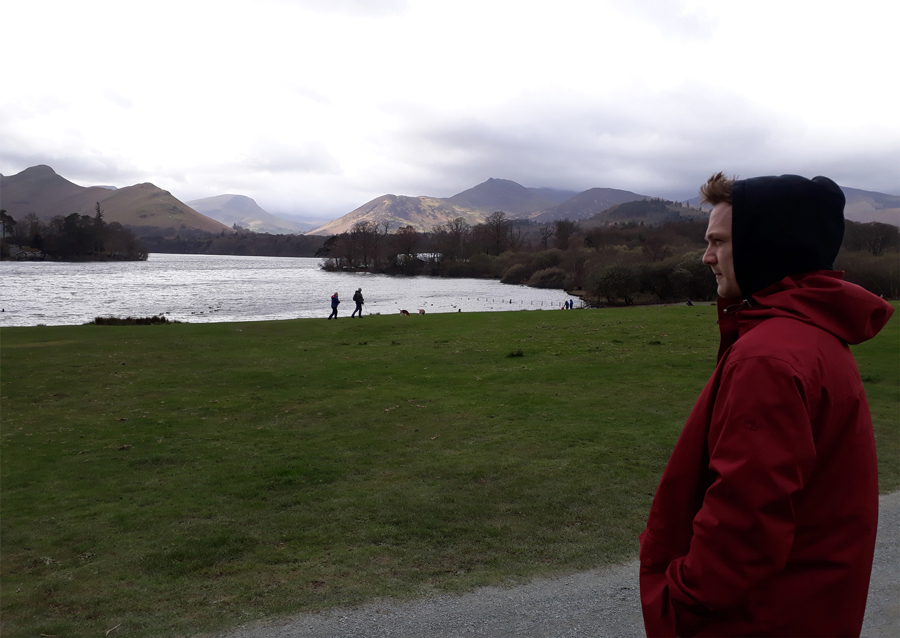 The chill off the lake was a little more than fresh, but it’s easy to imagine how lovely the area would look in late spring and autumn. 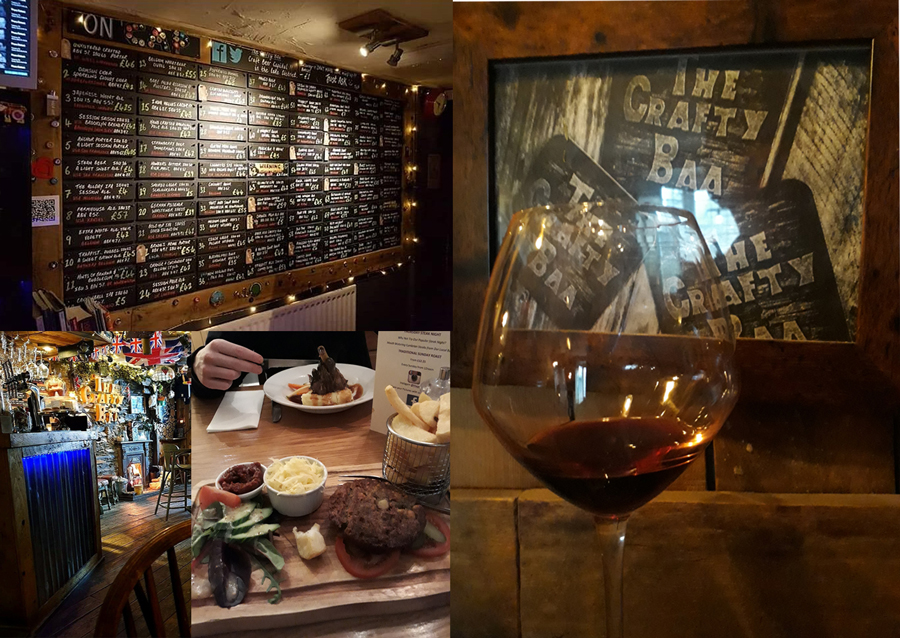 The Crafty Baa at Windemere was named AA Pub of the Year in 2018 for its extensive menu of beers, and is certainly off the scale for ambience – its three floors of eclectic décor and its commitment to upcycling/recycling are a celebration of quirky. My bunless burger at The Priest Hole was tasty and suitably hipster. 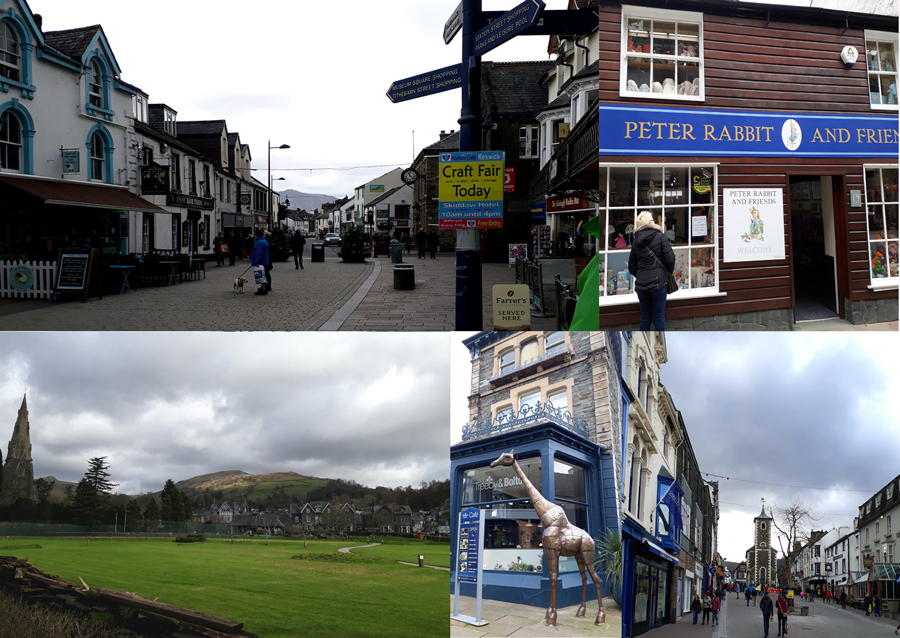 Around Keswick, and our very in-your-face bunny sighting. 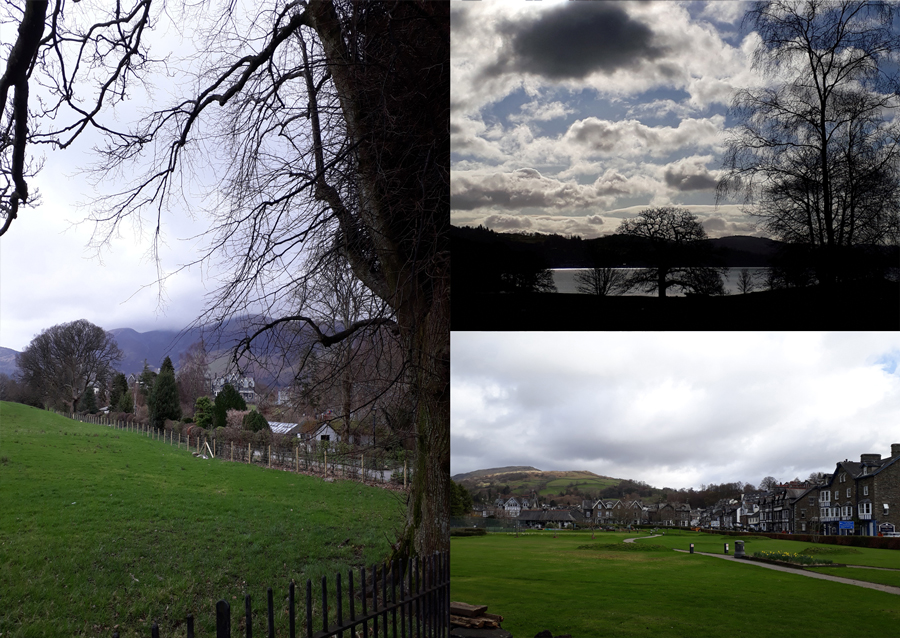 Some more scenes around Ambleside. 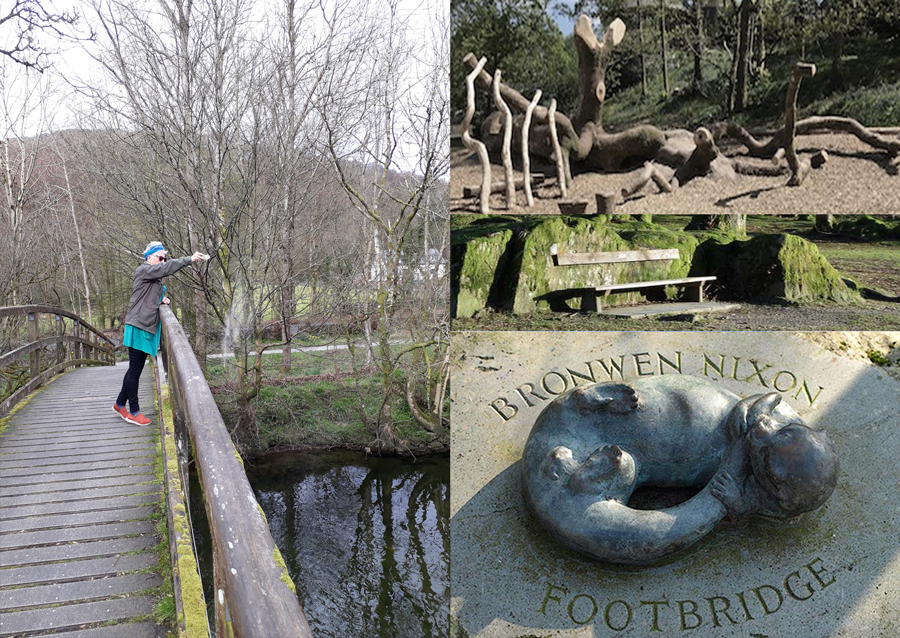 The Bronwen Nixon Footbridge and the bronze otter plaque near the Rothay Manor Hotel, owned by Bronwen, who was murdered in a particularly brutal manner by a tenant when he and his partner were asked to leave their lodgings as the hotel was closing for winter. The Play Log and memorial bench at Rothay Park.