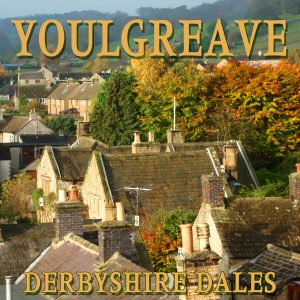 Youlgreave vs Youlgrave. Ten years ago I was a bit curious about the conflicting signposts and among local businesses, and even on official documents, there’s still no consensus. The UK’s “most misspelled village” has a definite identity issue – over the years it’s been Giolgrave, Hyolegrave, Yoleg, Jol’ve, Welegreve, Oelgreve, Zolgrelf, lolegrave and several other variations… not to mention the regional nickname: ‘Pommy’.

But unlike the name there’s nothing confusing about its appeal. The medieval stone buildings are full of history, and even a little bit of mystery, and it’s a popular pause on any of the three famed hiking routes that run through or near it. In ’09 I’d have liked to explore its magnificent nature trails but we just walked a little around the outskirts; though Brian had been given the “all clear” his energy levels still fluctuated and sometimes a stroll could constitute an expedition, though he was always conscious of not dragging the pace for the rest of us and gave it his best. We in turn did not push the physical expectations and were content to just potter about the streets, learning more about the backstory of those distinctive limestone buildings. The ancient walls are grey and sturdy and utilitarian in design, but they’re not grim.

We’d stayed at the village’s youth hostel, a narrow three storeys that had been purpose-built as a food co-op store in 1887, and from our basic but comfortable room on the top floor there were some smashing views of the River Bradford and the autumn colours of the dale. As Sam hadn’t been with us then I tried to book the same room this time but like so much UK accommodation, the hostel is seasonal and our early spring timing was outside its opening months. Good old Airbnb came through with some very swish lodgings at nearby Elton but still, I really would have liked Sam to see that view…

So I made up a new motto: closed doors are for opening and it doesn’t hurt to whine to the right people. Soon the hostel’s private tenant was leading us up those narrow stairs to that window and other than being a bit more post-winter faded, the scene from it perfectly matched my memory. Not so the staircase itself… I’d insisted it was “as steep as a barn ladder” but it turned out to be just a regular set of steps. Maybe I did inflate that bit but rather than question my version, I decided the originals must have been since replaced.

Once I finished reminiscing and taking a nostalgic pee, we thanked him and wandered back to the village square and its iconic reservoir. Conduit Head, aka The Fountain, was the first public water supply in Youlgreave, erected from local gritstone after a campaign by women who were tired of lugging water from the river on washing day. It held 1500 gallons and cost villagers sixpence a year to access, between 6:00am and 6:00pm daily when its single tap was unlocked by the overseer. The fresh spring water was piped to it from across the valley, and later extended from The Fountain to street taps and eventually into homes. When supply was compromised by a rotting pipe, the village men dug a new source from a different spring in nearby Bleakly Wood and four local benefactors financed the operation. Such was the community spirit that tourist blurbs claim is still typical of Youlgreave today.

Visitors sometimes mistake the familiar landmark for a tomb, an air vent or a war memorial, but to the locals its water is a precious resource worth celebrating. And they do just that during the annual ‘Well Dressing’, when Derbyshire wells are decorated with a mosaic of flowers, berries, leaves, stones and clay in a pagan custom that dates back to Celtic times and is unique to the county. The tradition was especially significant in the 17th century when regional villages gave thanks for their deliverance from The Plague that wiped out 75% of the population of nearby Eyam… though credit should actually go the Eyam residents, who voluntarily quarantined themselves to contain the spread of the disease. It was extremely poor timing that I missed it (this year’s Well Dressing, not the Plague) by a couple of months.

The Fountain was definitely the right place to leave some Brian. A favourite photo from our previous trip shows him, Ben and Dan on its steps, and this time Sam replicated his dad’s pose as he sprinkled some of his ashes there. After a bit more exploring and a homemade treat from Peak Feast café, we drove away from the rural peace and back towards psycho city life again. Earlier we’d avoided smacking into a kamikaze hare that darted at the car on a country lane (rabbit sighting – tick) but some more Youlgrave/Youlgreave signage contradictions on our way out said resolution of this name thing would not be as simple to achieve. 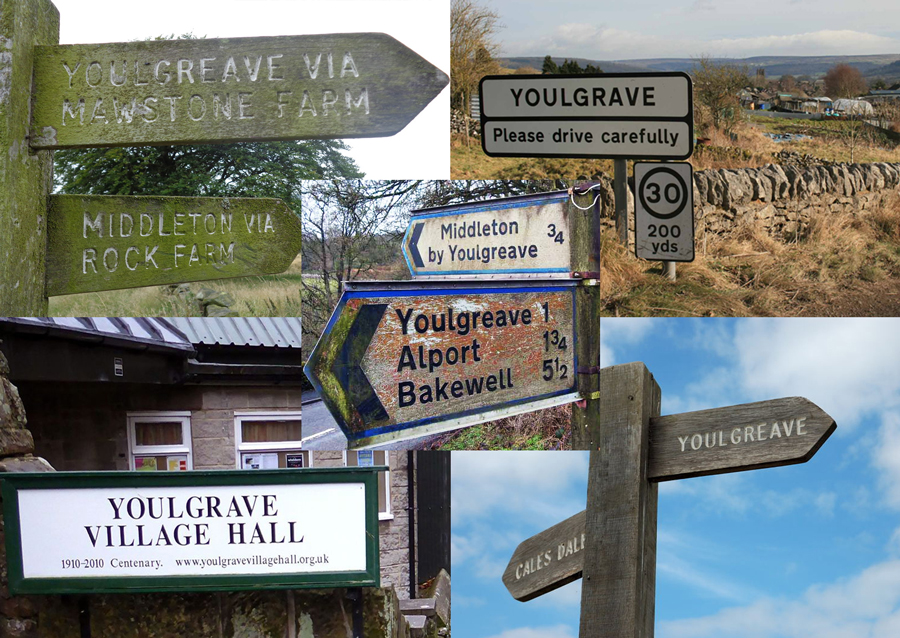 Pick a side in the battle of the signposts. The history of Youlgreave Parish dates back to before 1340, when the prosperous lead-mining area and commerce hub was granted a market charter. 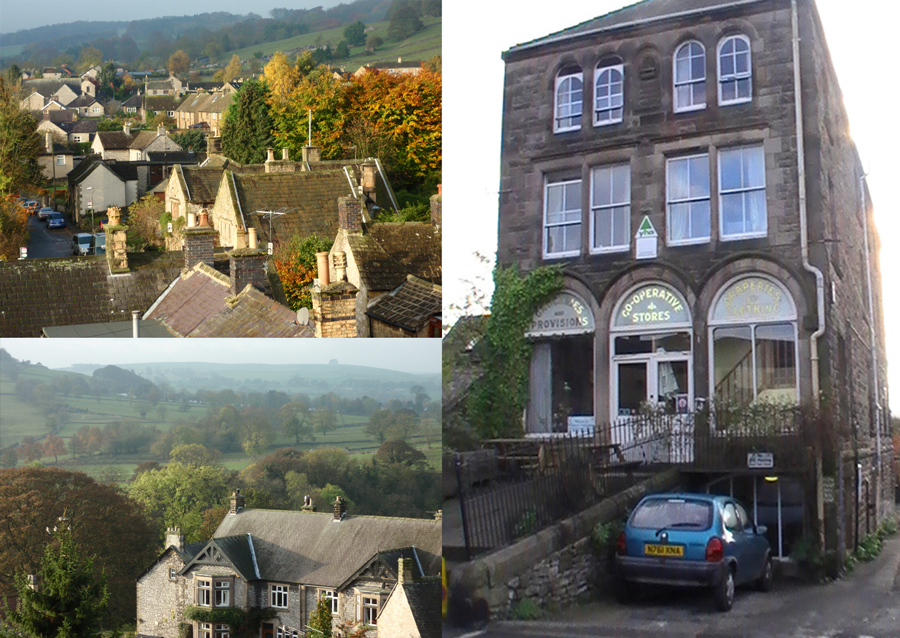 The hostel with its three-arched palisaded front and those views we loved 10 years ago, in a more colourful season. It was built in 1887 on the site of the original village school. 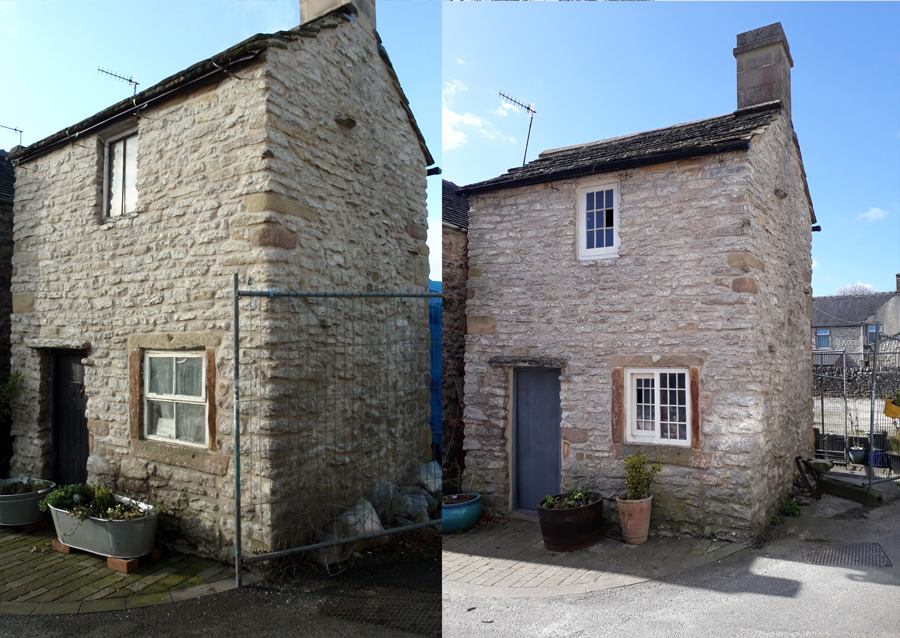 At 11’10” x 10’3” x 12’2” (3.4m x 3.14m x 3.7m), Thimble Hall (c1756) was named in the 2000 Guinness Book of Records as “the smallest detached house in Britain”. It’s not clear if that record still stands but with the current popularity of ‘tiny homes’, it’s likely there are other contenders. The one-down-one-up property has been a butcher’s, a cobbler’s and an antique shop, and home to a family of eight, but the current owners are planning to use it as an exhibition space for the world’s largest thimble collection. 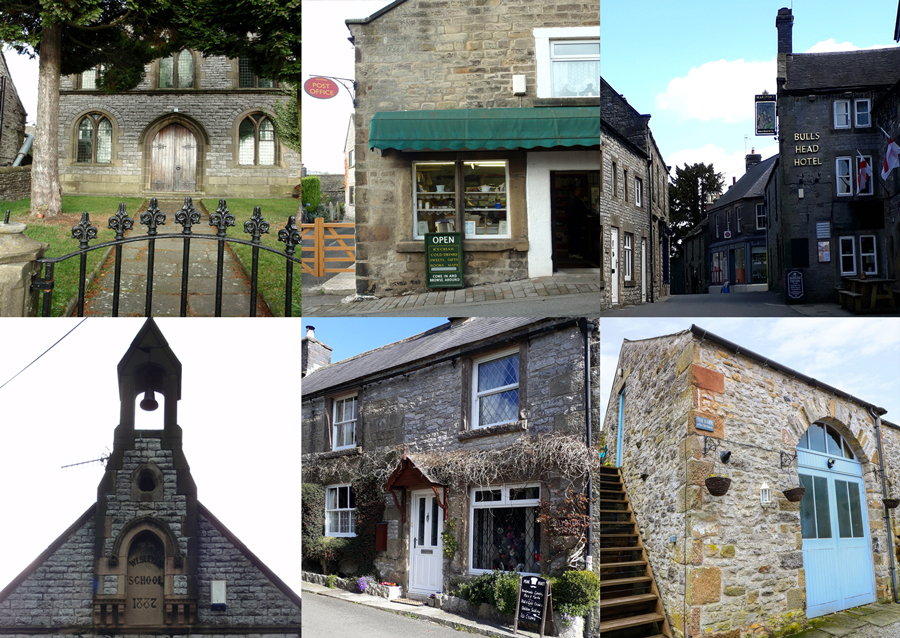 Historic buildings in the village include the Wesleyan School, built in 1887 and now a private residence, Bulls Head Tavern, a 17th century coach inn, the post office, the Peak Feast cafe and the old bakery (now a B&B). The main street contains many pre-1700 buildings, including All Saints’ Church, which has a 12th century font. 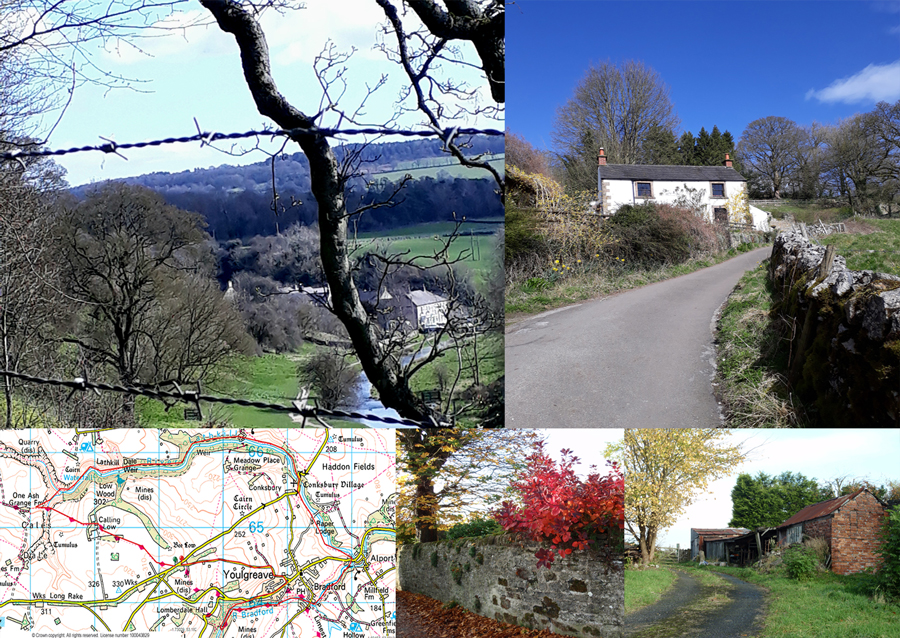 Walking paths around the village and a map of the popular eight-mile circular trail through Lathkill, Cales and Bradford Dales. 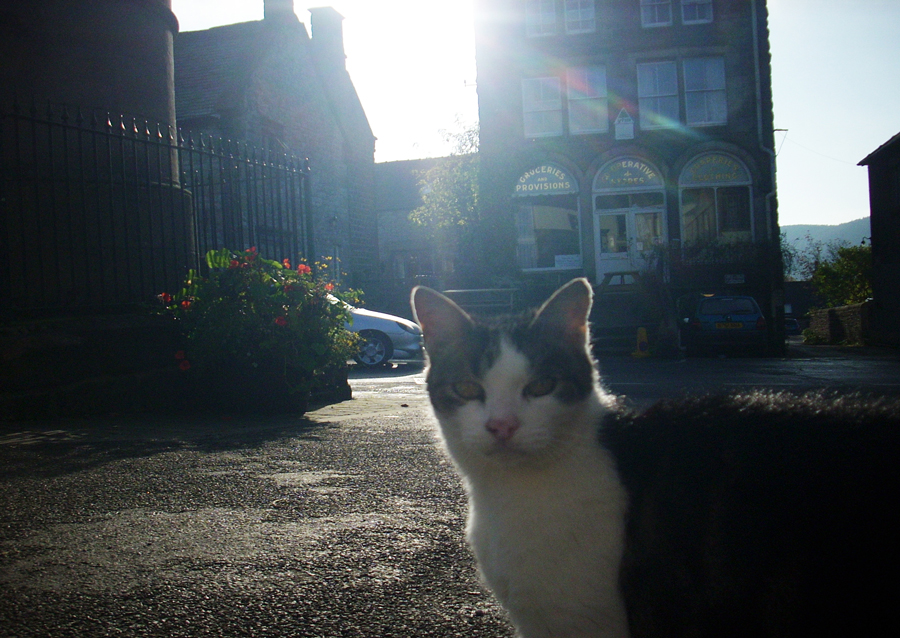 The last time we were here a cat known as The Mayor used to roam the village square and was a respected resident of Youlgreave. 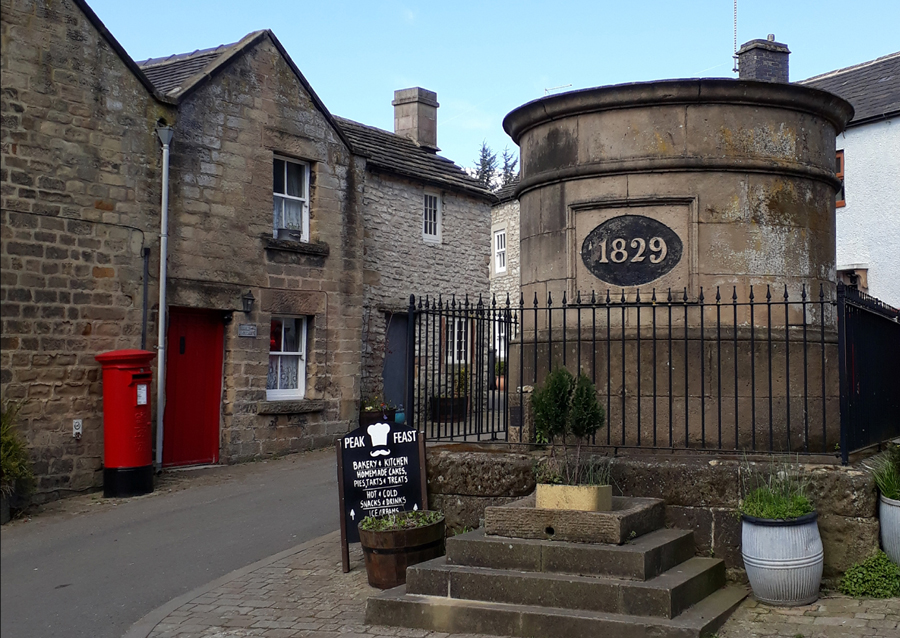 Behind The Fountain next to the post office is Thimble Hall, sold at auction for £39,500 in 1999; bids were phoned in from Hong Kong, Athens and New York (including one from celebrated spoon-bender Uri Geller) but the successful buyer was Frederick’s of Chesterfield, ice cream manufacturers. 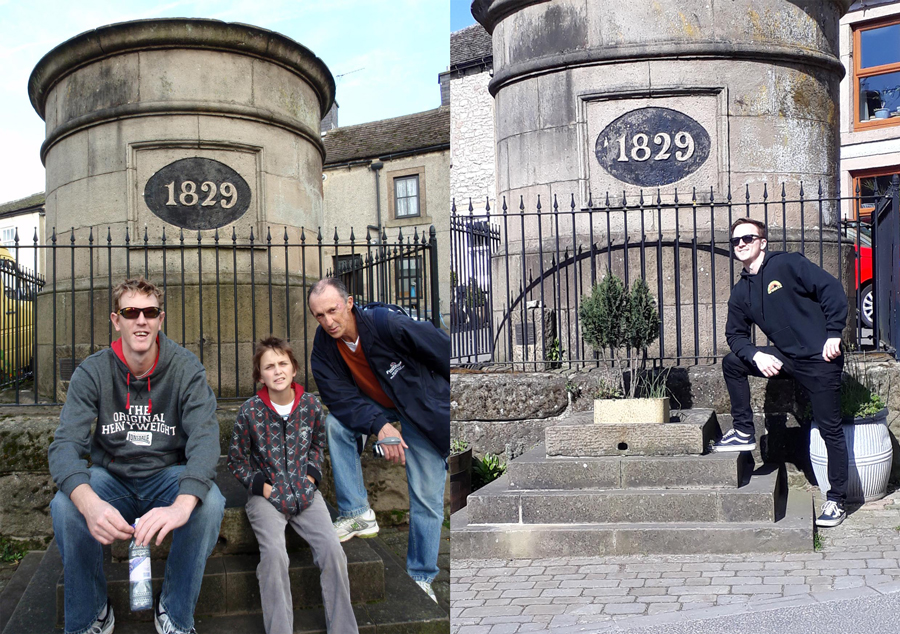 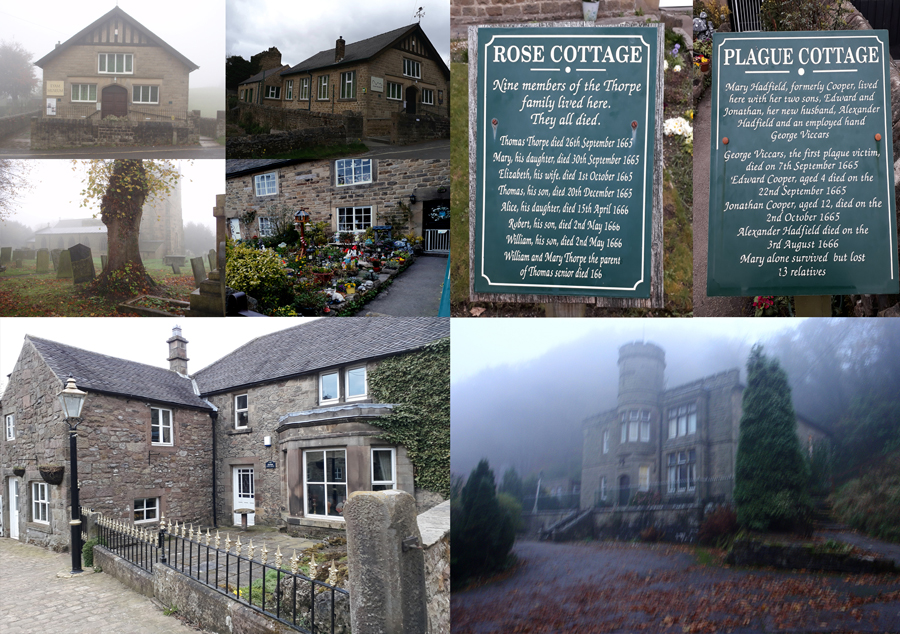 The Eyam Museum then and now; the new rat logo on the sign and weather vane is a recognition of the source of the bubonic plague that killed 260 of its citizens in the 1660s. A bale of damp cloth delivered from London contained fleas from infected rats that had spread the disease and caused the deaths of thousands in that city; St Laurence’s churchyard and the graves of some of the Plague victims; a ‘Plague house’ and its colourful garden – many local Plague cottages are indicated by signs listing the family members who died there; our Airbnb in nearby Elton, and the spooky looking Eyam Youth Hostel we stayed at in 2009. 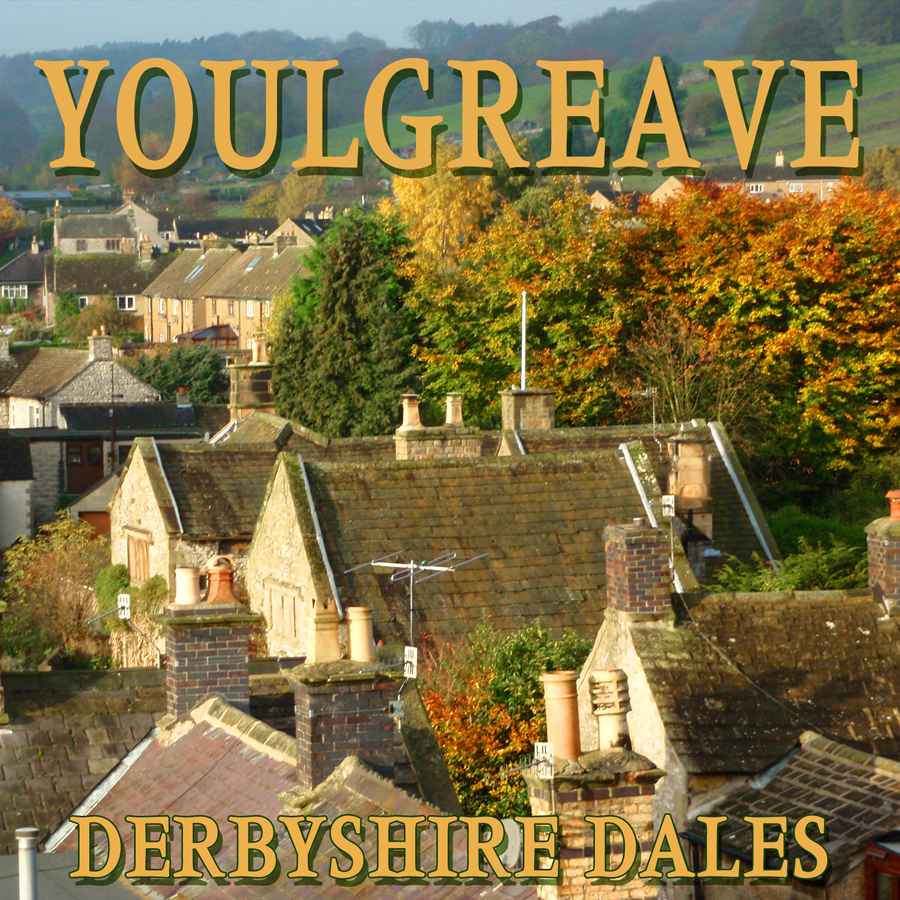