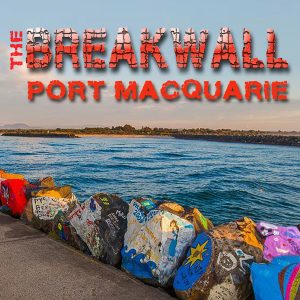 Port Mac was a keen contender for The List but not at the expense of Brian’s original P – Port Isaac, in Cornwall. Yay for extra ashes and the opportunity to add this favoured destination but a creative reshuffle put it under T for The Breakwall, the colourful tourist attraction that extends along the southern edge of the Hastings River and a little way along the beach.

This popular outdoor gallery, a smaller version of the Nambucca Heads V Wall, began as an art competition in 1995 to replace random graffiti. It is now a unique ‘guest book’ for visitors, a jagged canvas for pictures, tributes, declarations of undying love, and commemorations of anniversaries or holidays. It’s occasionally caused controversy – some messages were labelled obscene and the general look ‘untidy’ – but most locals consider it a community asset. After degradation and storm damage a major renovation in 2014 replaced more than a third of it with new crest rock but it was not considered feasible to relocate the decorated rocks that were removed. Any gaps in the artwork were quickly filled in however and tourists often return to check out the updates… which now include a bit of our Brian.

We’d been visiting the Port area for years and had amassed a clump of happy pre-cancer memories there… the Christmas Cove cabins where we sometimes stayed on our way down to my parents’… their week-long 50th wedding anniversary family holiday at Rainbow Beach in 2004… riding camels along Lighthouse Beach… fishing and golfing and wishing we had the money for the Top Gun Jetfighter joy ride package… and a live-for-today lesson when a bottle of Agent Orange we bought from Long Point Winery turned to undrinkable vinegar because of my insistence that we “save it for a special occasion”.

But it was the annual Sharkey reunion that drew us there every May – an event Brian was determined to keep attending regardless of how crappy he was feeling. His extended paternal family was so important to him (his mother’s family left his life when she did) and as his dad Ted was one of 11 – nine boys and two girls – there were usually myriad cousins and their families there as well.

A good spot for the scattering was chosen: on the eastern end of the Wall, behind Town Beach. Rather than paint an existing rock I took a large pebble from Boulders Beach in Ballina and mosaicked it then added some of his ashes to the grout. Fine in theory, but not my smoothest work – the ashes turned the grout to gluggy porridge and when I got a bit too vigorous in the clean-up, a few shards of glass tesserae pinged off and were lost. The finished product fell short of how I imagined it would look but one of the joys of mosaics is that mistakes can become features; a passable patch-up and a thick coat of BondCrete glossed over the rough bits and sealed him against the elements.

A few of the Sharkeys wanted to be there too so the morning after that 2016 reunion we walked along the path beside the Breakwall towards the selected site. It was sunny but cold and when someone advised that 90-year-old Aunty Freda’s asthma might be struggling to manage much further, we stopped and – whoa, kismet – right there was a large red and green tribute rock, dedicated to an obviously passionate South Sydney Rugby League supporter, complete with their Reggie the Rabbit mascot. Brian had always been a Balmain Tigers man, having played in their junior teams, but since the travesty of the Tigers-Magpies merger he preferred Souths. It was a family tradition, as the senior Sharkeys had been raised in Rabbitohs heartland. The little cast iron bunny cousins Rose and Carol bought me could be kept for another drop.

There’s only a few of Ted’s generation left now but the remaining siblings and the next generation still get together every year. My promise to keep going to the reunions won’t be a hard one to honour… besides genuinely enjoying them, the fact that I’ve finally worked out who belongs to what twig on the family tree feels like a victory for my limping recall (at this stage my memory issues were still under investigation). This year illness and other commitments kept the numbers low but it would have touched our boy deeply to know that his beloved Aunty Freda and some of the cousins were there when he was siliconed firmly into his latest resting place. 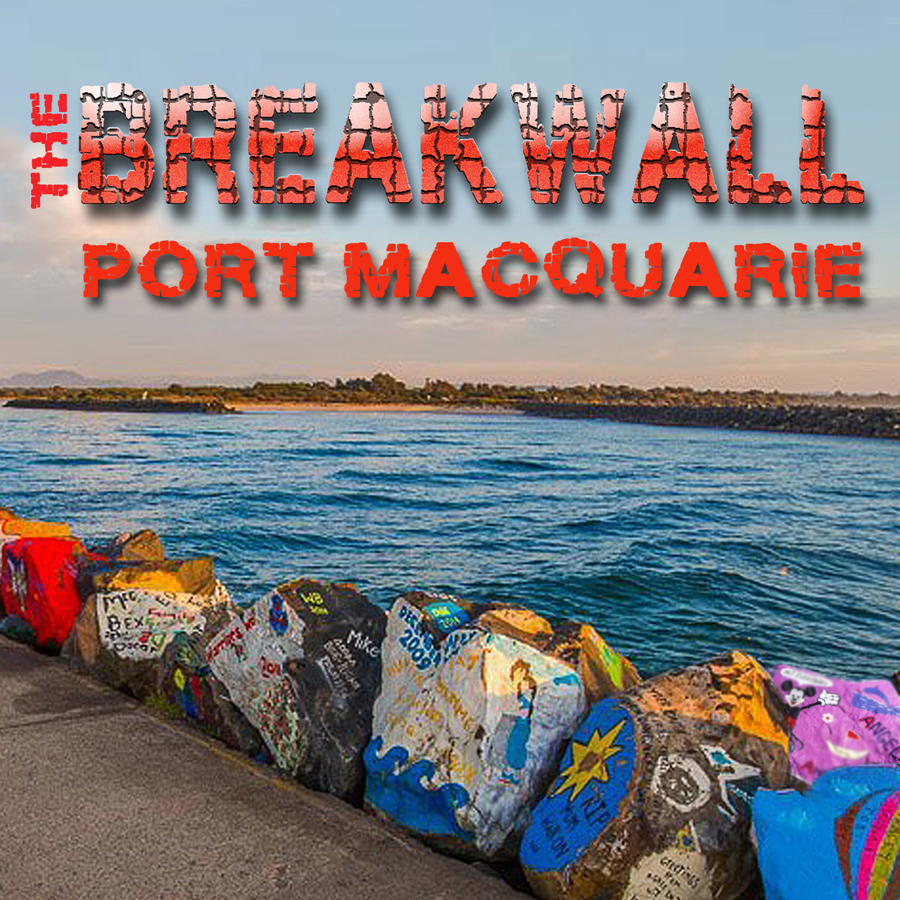 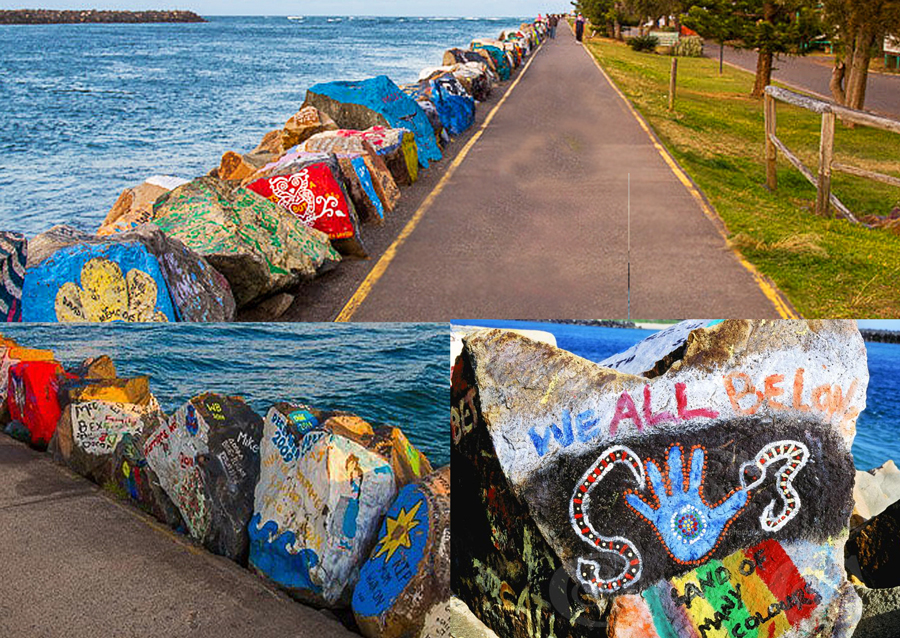 The coloured rocks of the Breakwall. 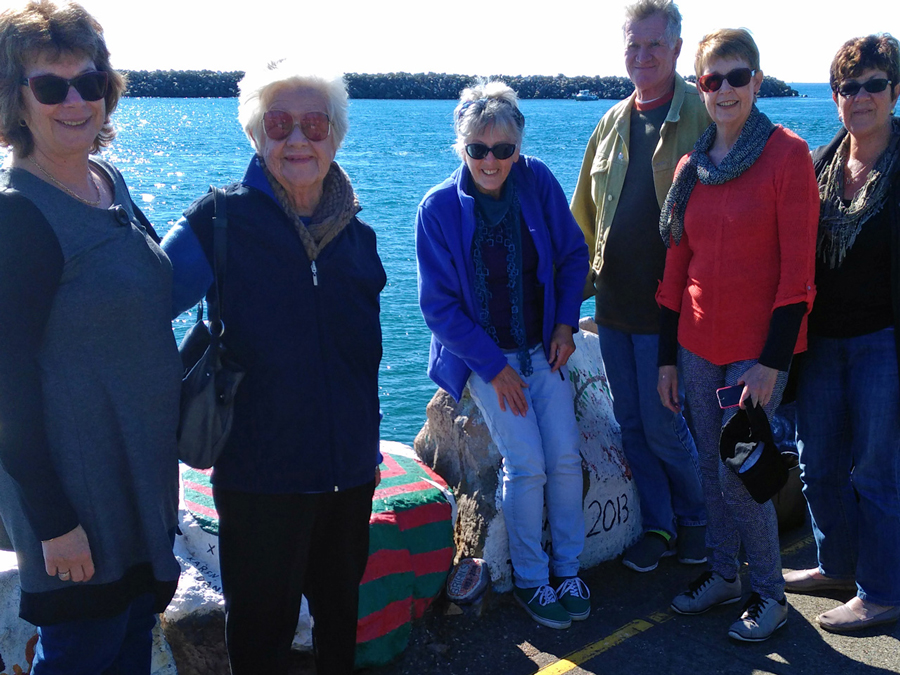 With Aunty Freda and cousins Lynda, Noel, Janelle and Carole. Also present were their partners Peter and Rose, and Ken with his trusty silicone gun. 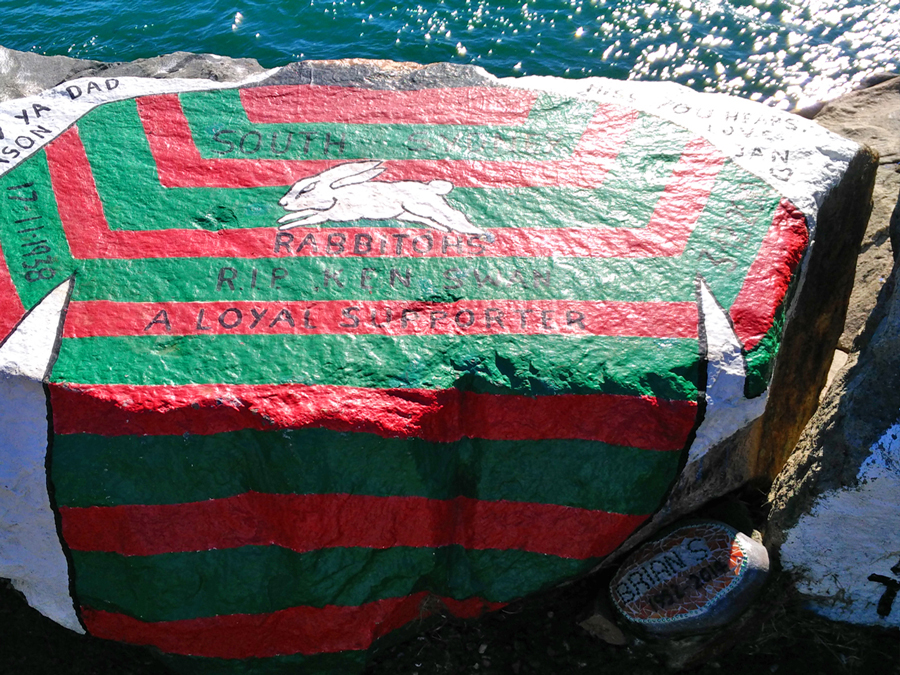 The smaller rock at the base is Brian’s. 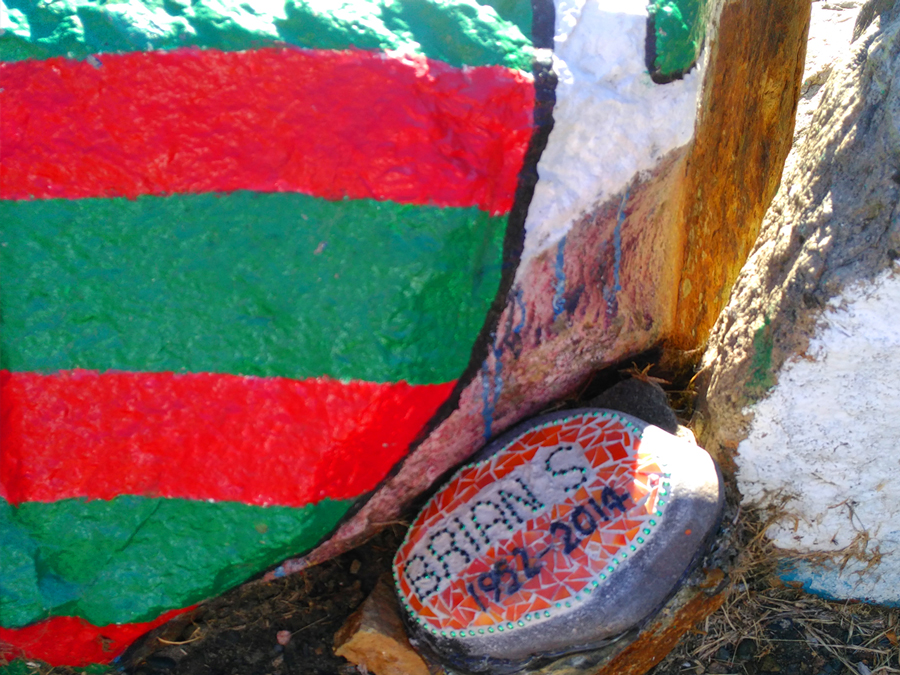 Brian’s ashes are in the grout surrounding his name. 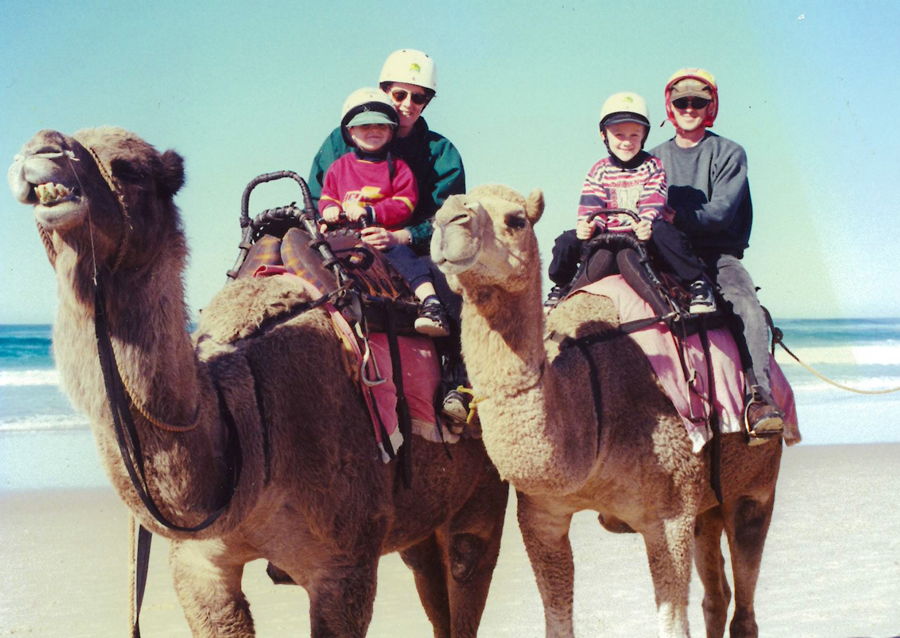 Fun memories of Port: riding camels with Ben and Sam, Lighthouse Beach, 2002 (and that distinctive rotten-broccoli smell when you got downwind of their full nappies)… 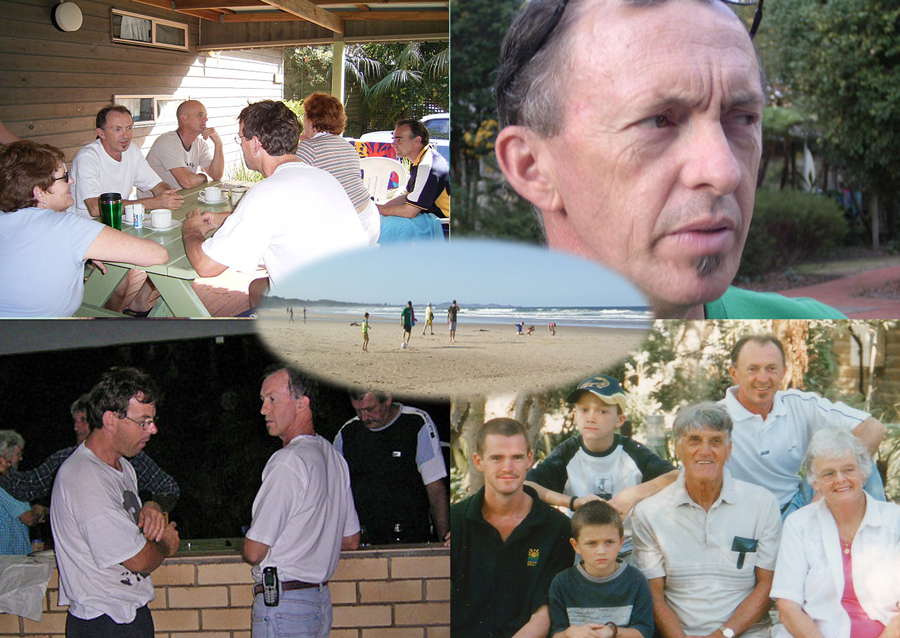 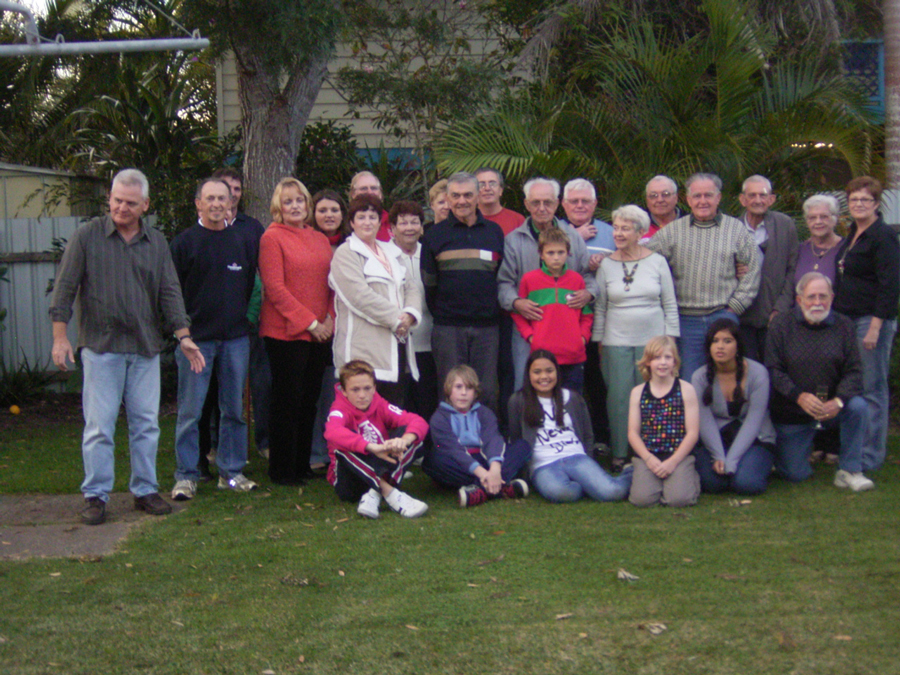 The 2008 Sharkey reunion, with Brian standing second from the left. Ben (in his South's Rabbitohs jumper) is in the middle in front of his grandfather, Ted, and Sam is sitting first on the left. 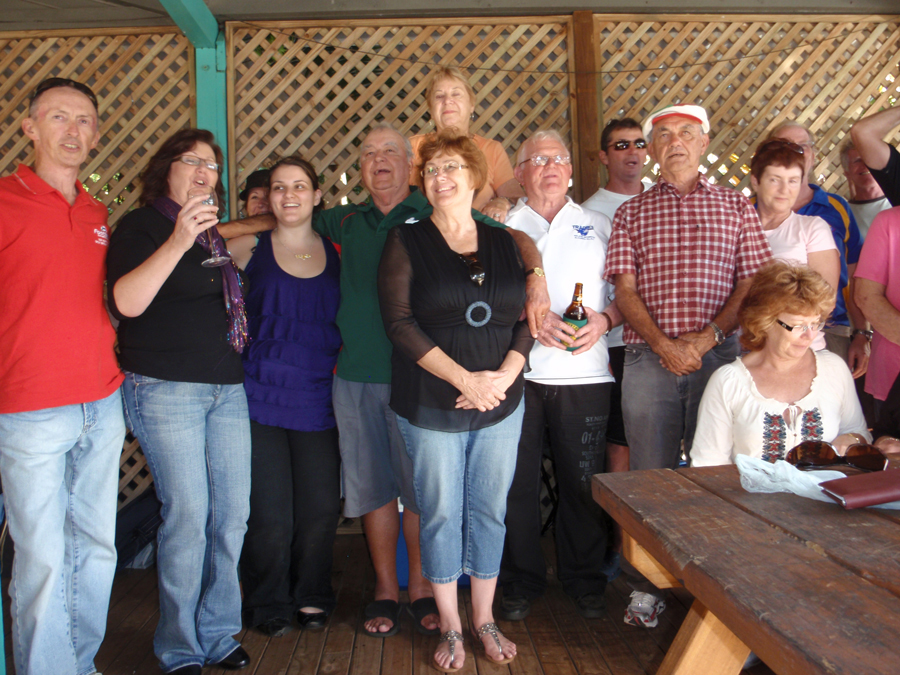 Brian at the 2010 Sharkey reunion.