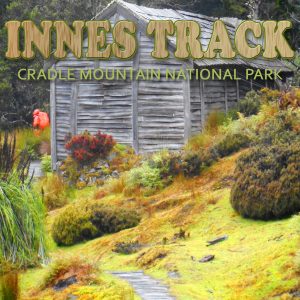 Ten minutes into the trek we’re all hi-ho, hi-ho, it’s off to Lake St Clair we go. Half an hour later confidence meets reality, no one is jolly and I just want to curl up and cry.

But with nowhere else to go we haul ourselves up the rockface via chains and determination while ice shards pockmark our eyeballs and obscure all vision past our noses. Not quite what we’d imagined when we swallowed the “Every uphill step is worth it” promos and sealed our commitment with some very big dollars, or when we prepped like maniacs, clomping endlessly on treadmills, jacking up the gradient and pack weight till we could scale the steepest mountain (well OK, Barham Street) fully laden and without toppling. When we’d judiciously researched gear and studied Reese Witherspoon in Wild we expected a challenge, but a few rigorous hikes around Narawntapu and Freycinet and Dove Lake convinced us the SNOTs were Overland ready. We even had our faith in this belief immortalised on special Glenda-designed t-shirts.

Fortunately Day One turned out to be the extreme and after its ice, wind and snow (of course snow) the remaining trek was a mosey by comparison. Tough, yes, and I maintained the frequency of my “are we there yet?” whinges, but the feeling of achievement after completing those 70-something kilometres is one that won’t leave us for a long time. It helped that we didn’t hate our fellow trekkers, an easy group of six, or our guides Mitch and Matilda. Their anecdotes and cooking more than made up for their irritating fitness and “Not much further now…” chirping. Predictably there were equipment and muscle breakdowns along the way but every evening the Tassie wines and fire-warmed comfort of the huts effectively misted those memories. From under a hot shower at the end of a muddy slog, the aroma of Matilda’s muffins seeping through from the kitchen, gas fire roaring, it was easy to dismiss the ‘Chardonnay Shufflers’ tag as envy.

The majestic landscape gifted an overload of opportunities for dispensing Brian but (for no other reason than it started with ‘I’) I wanted the Innes Track. If we could find it. The track was surveyed in 1895 by EG Innes as part of a proposed and ultimately discarded plan for a railway, but while ‘Mitchilda’ knew plenty about the geography and history of the area they were hazy on the track’s exact route. Old maps were vague but indicated it crossed the Overland near an abandoned copper mine on a side track off the Pelion Plains, where we’d be on Day Three. By then we should be well into our tramping groove, having conquered mountains, valleys, creeks, moorlands, forests, plateaus and (my new favourite word) tarns.

At Pine Forest Moor Hut we geared up for the long descent to the Forth River and Lemonthyme Valley, then back up to the plains where we dumped our heavy packs and headed for the mine, clicking on our headlamps at the murky entrance. The tunnel narrowed and the ceiling lowered but SNOTs don’t do claustrophobia and about 30 metres in we came to a dead end that was an ideal spot for our boy. Even with freaky big cave crickets on the walls sizing us up, it would be a peaceful resting place.

Over dinner that night I hit the red (the thought of trekking with a hangover had been enough to limit me till then) and fell into chatty mode. For me it’s a short trip from witty conversationalist to drooly-mouthed drunk so I generally respect my two-drink max, but today deserved an extra toast. For the ash drop, yes, but also because I’d temporarily been able to put aside a nagging fear: that of Early Onset Dementia. My vagueness was legendary but the moodiness and memory loss had grown so much worse and while I could logically put it down to grief or doing too many things at once, the dread just wouldn’t go away. Dr Google agreed and with my history of head injuries, my GP confirmed the possibility and promised to schedule relevant tests when I got home, “but meanwhile just forget about it and enjoy your hike”. Yeah. Sure. And so began a cycle of scary what-if scenarios = distracted sleep = even more forgetfulness = prophecy fulfilled. I hadn’t shared my trepidation with anyone but figured a few glasses of Shiraz couldn’t make it any worse.

Two more days of waterfalls and fungi and forests of 2,000 year old King Billy pines rounded out a magical experience. Finally we could throw down our poles and catch the ferry across to Cynthia Bay for the bus ride back to town… and acknowledge that those promos had been more accurate than ironic after all. 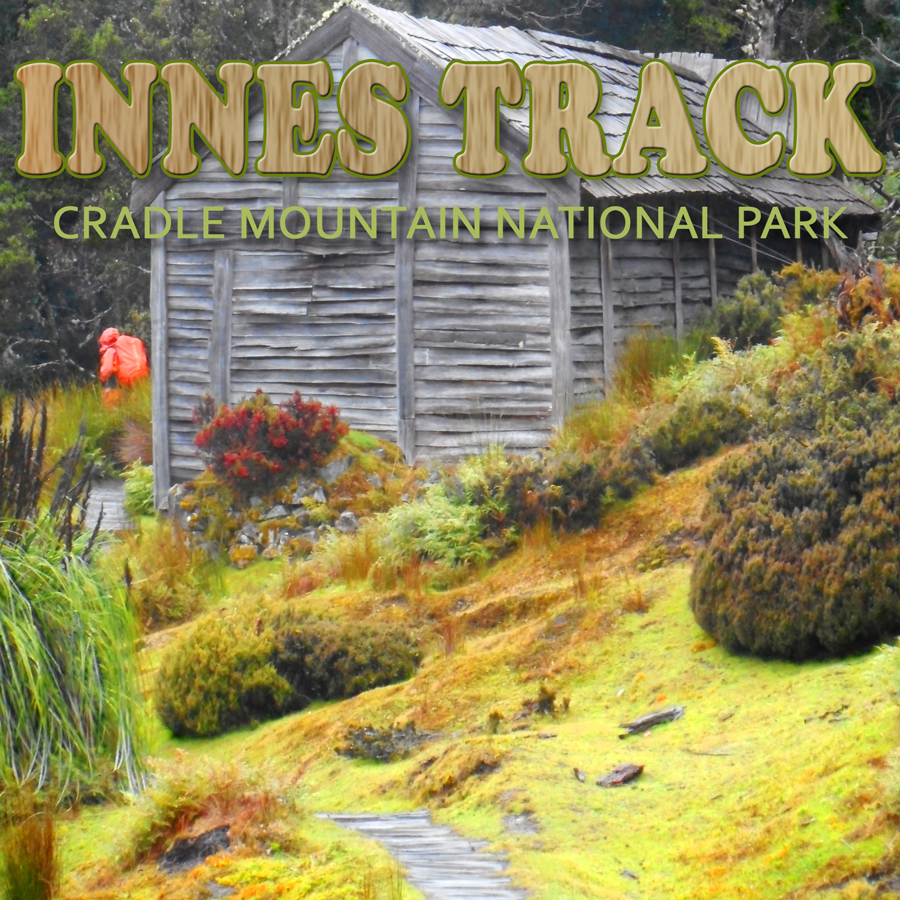 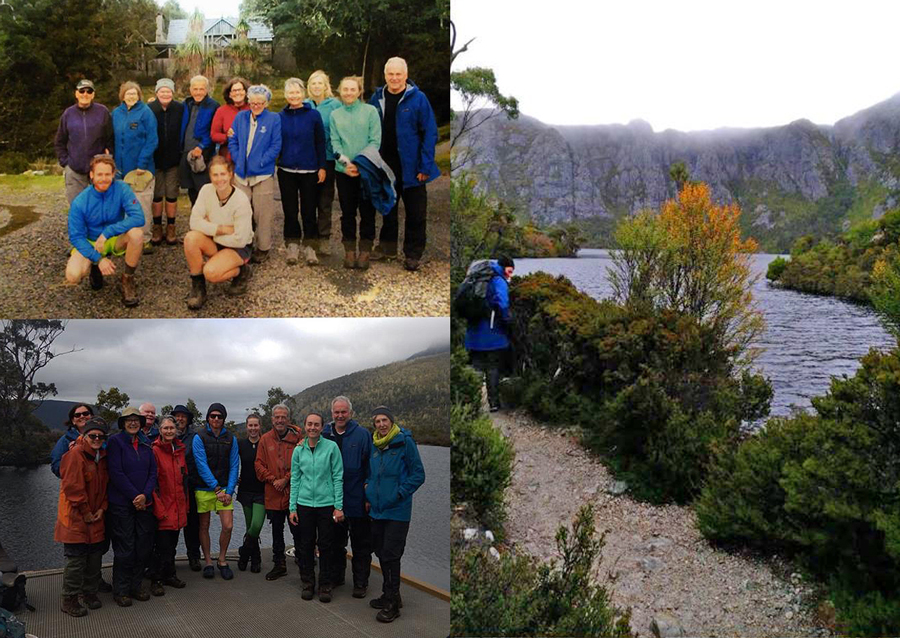 The group pre- and post-trek; Rob at the start of the track, beside Crater Lake. 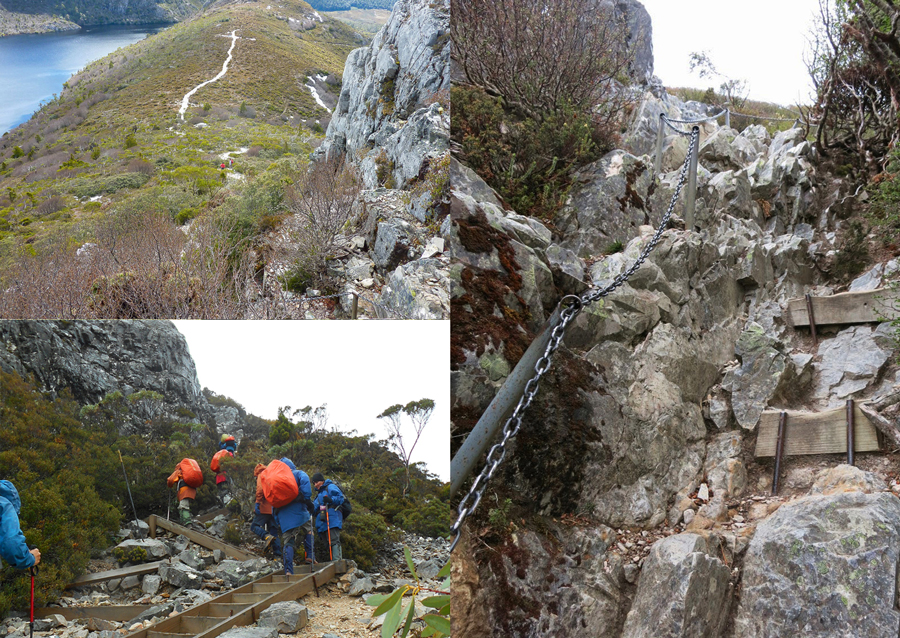 Looking back down the track on the climb to Marion’s Lookout… and to what’s ahead; the chains we used to heave ourselves up the final bit. 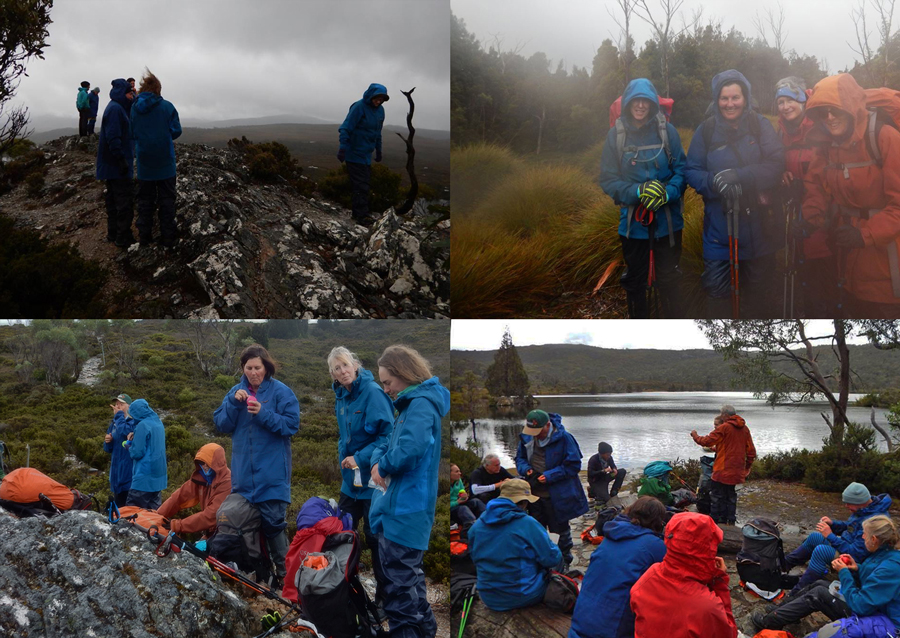 The blustery Marion’s Lookout (top left) was not the last of the cold weather. 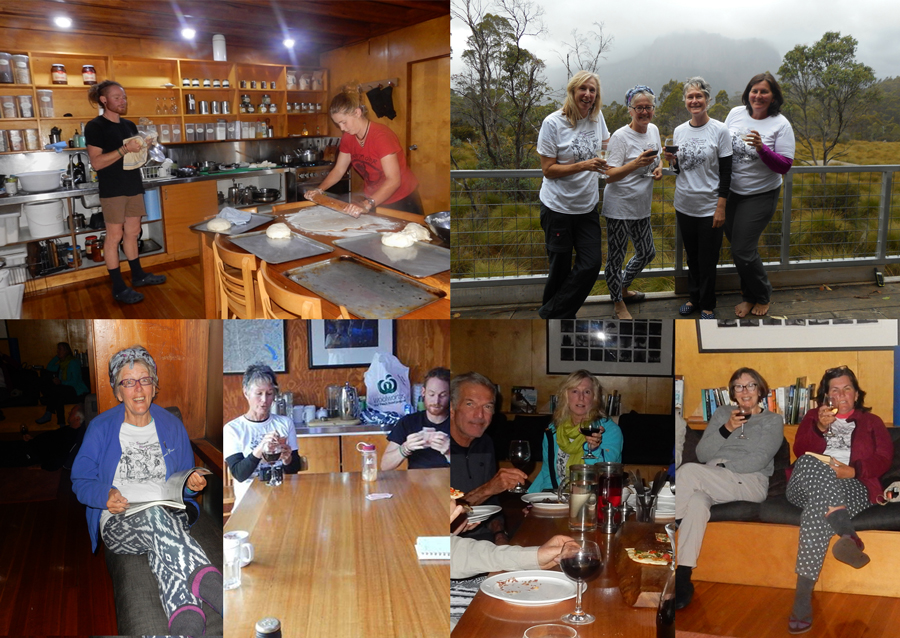 The huts, a delightfully unapologetic way to wind up each day. 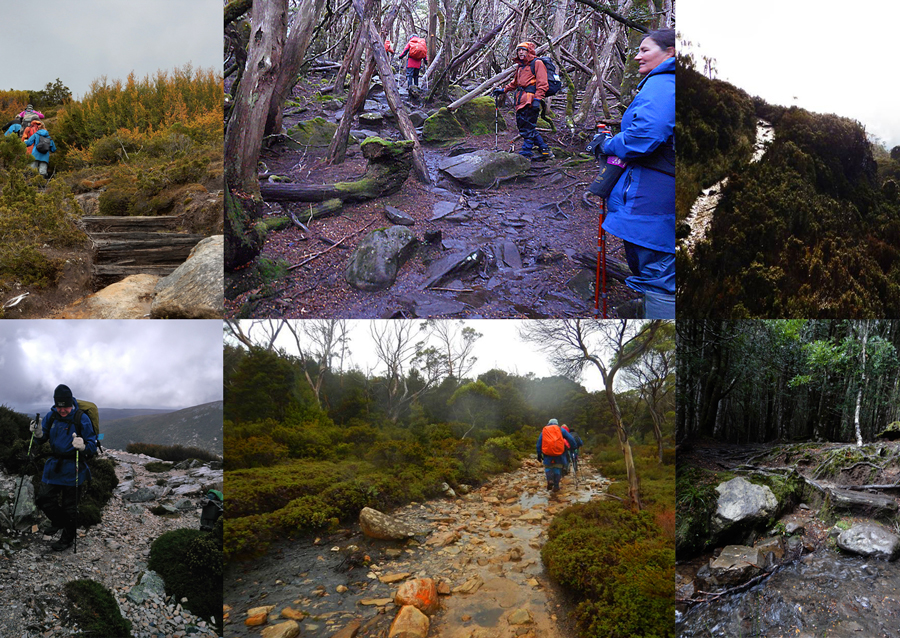 The diversity of the walking tracks presented challenges… and mud, lots of mud. 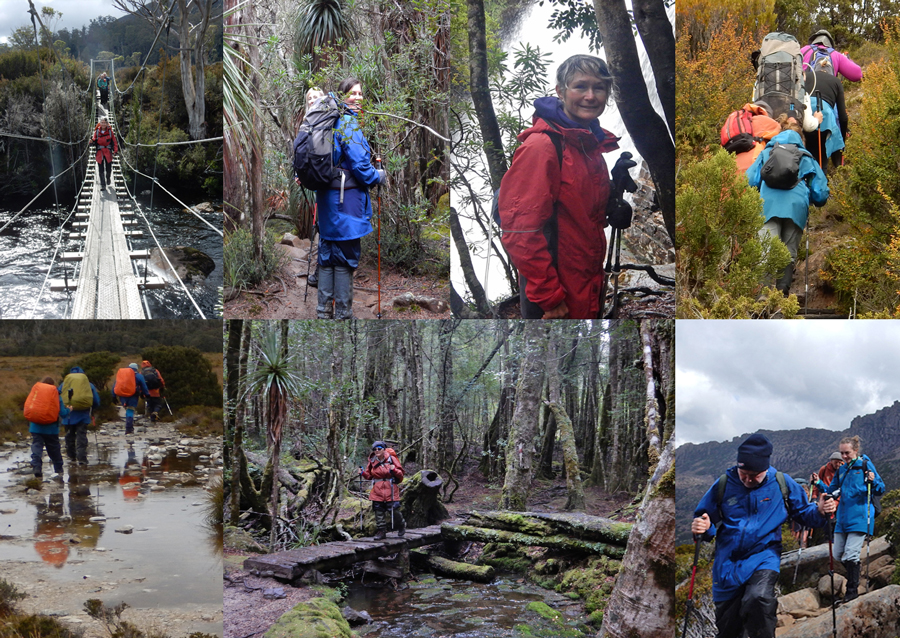 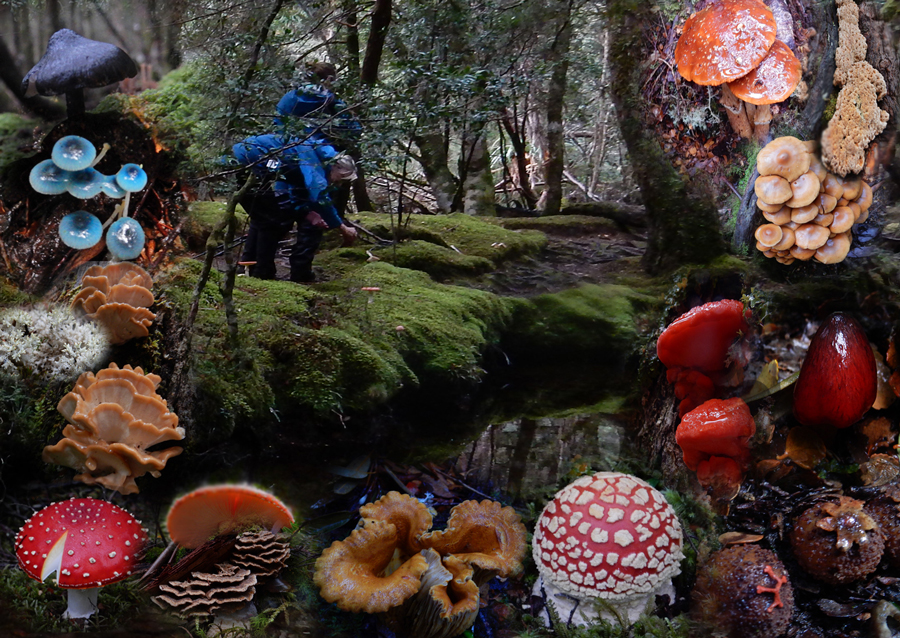 Glenda checks out some of the track’s fascinating fungi. 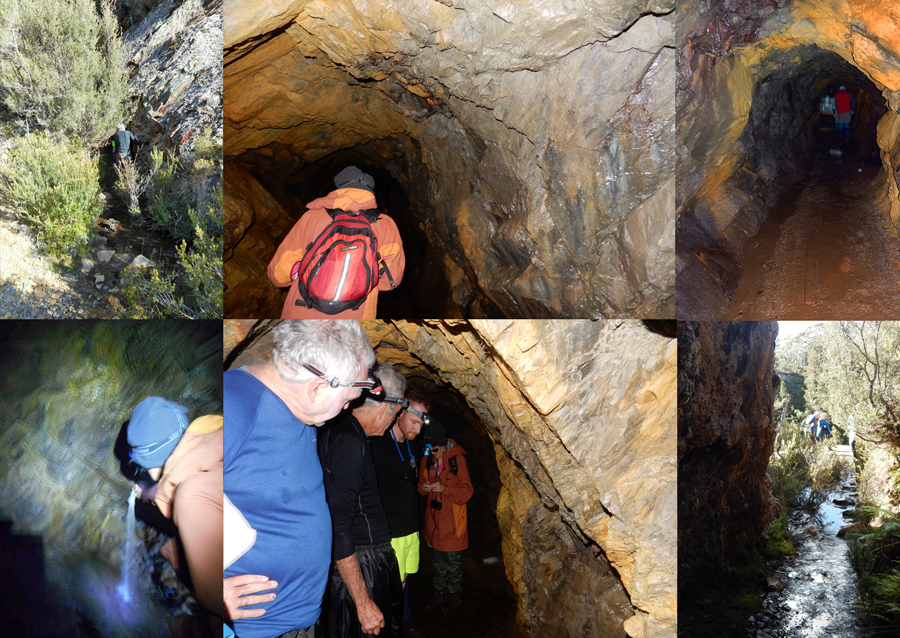 The abandoned copper mine off the Pelion Plains where (some of) Brian found a home. 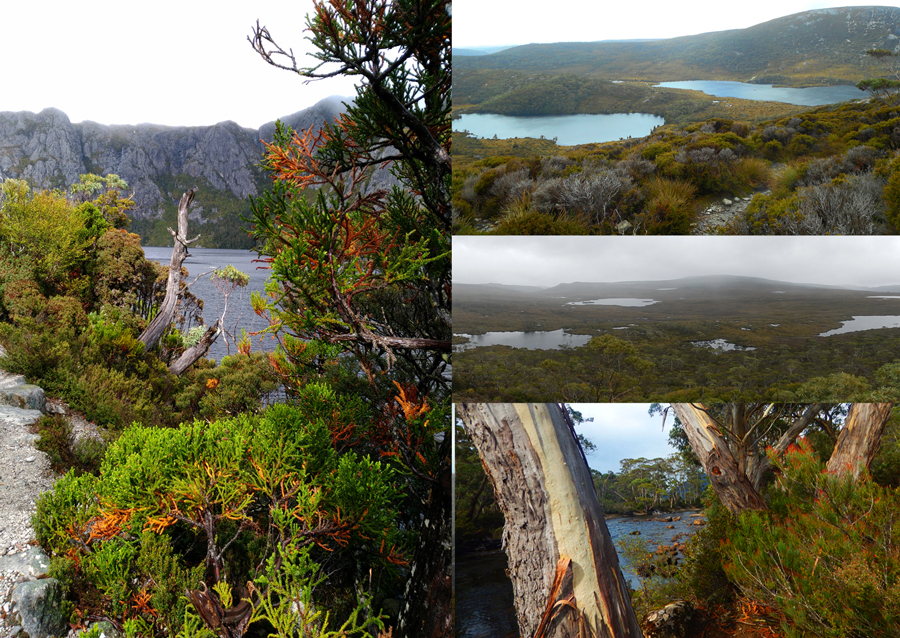 Some more of the stunning and varied landscape we saw on the trek. 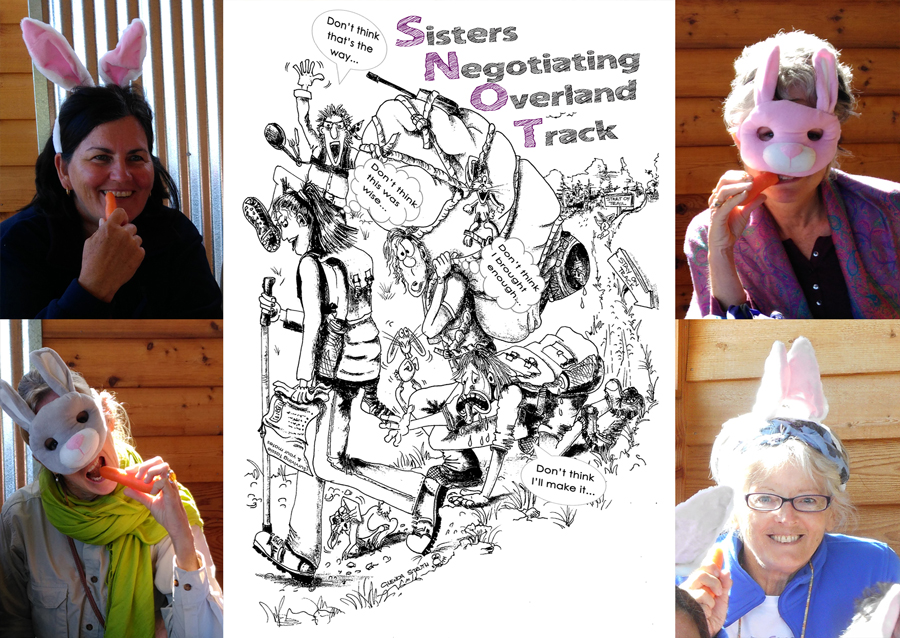 We didn’t expect there would be bunnies on the Overland so Glenda included some in the t-shirt design she created… and the SNOTs had surprised me with their rabbit impersonations a few days before we embarked on the trek.