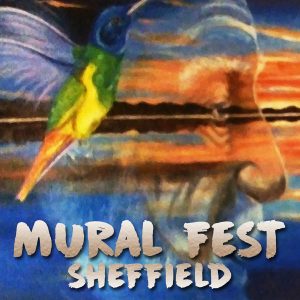 Four months before he died Brian asked if I’d take him to see Lismore’s Back Alley Gallery, a collection of artwork in the depot lanes at the rear of shops in the city’s CBD. It had been there for about three years and artists were always adding new pieces, tarting up the industrial look with some fascinating murals. He had been keen to photograph the gallery for some time and wasn’t sure how much longer he’d be up to it.

He still hadn’t used a wheelchair locally but I’d rented one just in case and on this hot March day poor old mate finally gave in. I understood his wish not to attract attention – or worse, pity – but realistically he did not have the energy to walk a block, much less cope with the hectic Saturday morning crowds and uneven laneway surfaces. His reluctance turned to relief when, exhausted after a happy half hour snapping away, he wanted to go back to the car but we were unable to get through a huge ‘March in March’ protest that circled the block. He fully supported the cause – a lack of confidence in the Abbott government – and I was sure the protesters would let us cross, but we’d never be able to get the car out of its centre parking space anyway so I took him into a friend’s Italian restaurant where he could sit in comfort till the rally moved on.

How impressed he would have been with Sheffield. This quaint Kentish town in the north of Tasmania is a feast of public art spaces and is also proximate to many picturesque natural features. Paintings cover the walls of 60 or so local buildings and depict the human history of a region that saw a savage decline in population when employment waned after completion of the Mersey-Forth Power Scheme in the early ´70s. The town was revitalised when a small group of determined locals, inspired by the Canadian town of Chermainus, brought to life their vision of combining arts and tourism and reinvented Sheffield as The Town of Murals.

While binging on its fine art, photography, woodcraft, pottery, and – bliss – mosaics, we discovered our visit coincided with the 14th Annual Mural Fest. The competition draws entries from all over the world with nine successful qualifiers transferring their creations on to large panels in the park for final judging by the community. They work to a nominated theme – this year it was ‘Reflections in Time’ – and as we walked among the labouring artists I decided to ask if anyone would consider painting some ashes into their mural… as you do. I never really expected they would want to interrupt their focus and oblige, but the first one I approached, Patricia Smart, just held out her palette and said “why not?”

She’d dedicated her piece, a collaboration with Olly Grohs and Ben Munk, to her Uncle Brucey who had died just two days before so I was touched that she chose to share such a personal tribute with Brian. Learning that today, Brian’s 64th birthday, was also her uncle’s birthday was a delightful coincidence… one that quickly turned into a “This is just too freaky” when we ran over ‘Happy 60th Brian’ scrawled across the road in chalk on a drive out to Mount Roland Reserve later that day. By the time I discovered that both Trish and Brian had once studied at Meadowbank Technical College I couldn’t even muster up surprise.

Bothering the talented Trish with my odd request was a right move in more ways than one. She was also able to provide a rabbit sighting – if we could find it – when she directed us to another of her murals, this one on the wall of a building in front of the town’s Visitor Information Centre. The World Opens won the People’s Choice Award at Mural Fest in 2011 and she assured us that a bunny was hiding among its quirky layered images. With no clue as to its size or colour we studiously examined the 4.8m x 2.1m painting of sunset over Cradle Mountain emerging from a sardine can…

“Look – it’s crouching there, near the rock…”

We love a good mystery but this was doing our heads in. Yay for wine o’clock and being side-tracked by cheeses. Mission abandoned – we would just have to take Trish’s word for it. 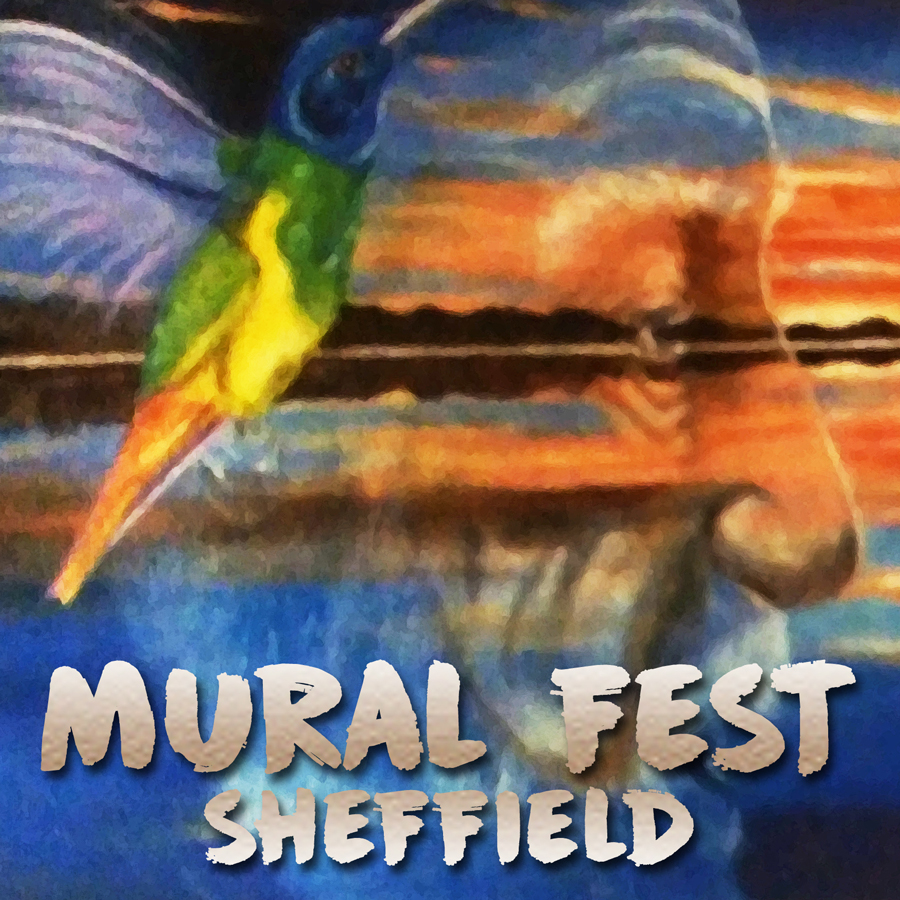 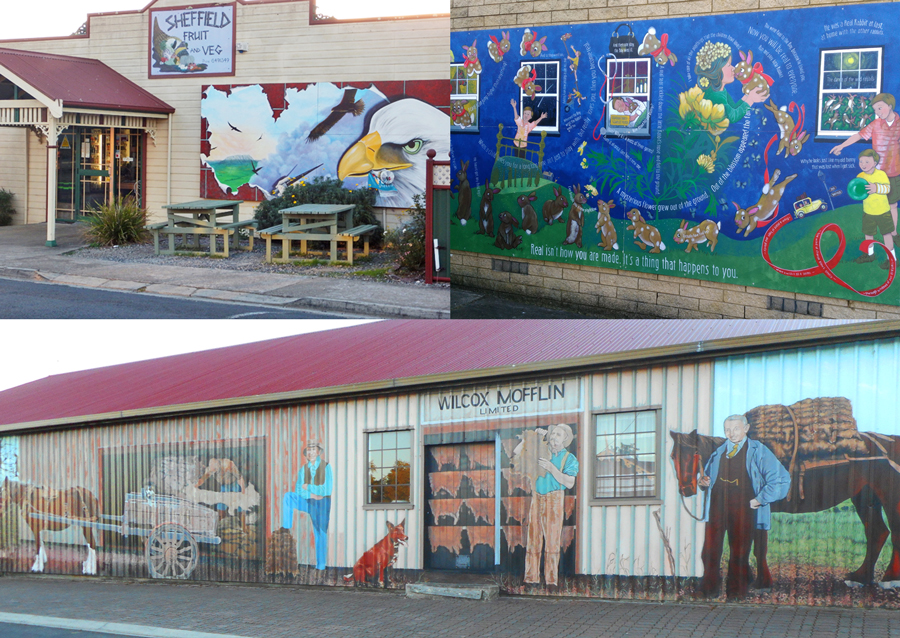 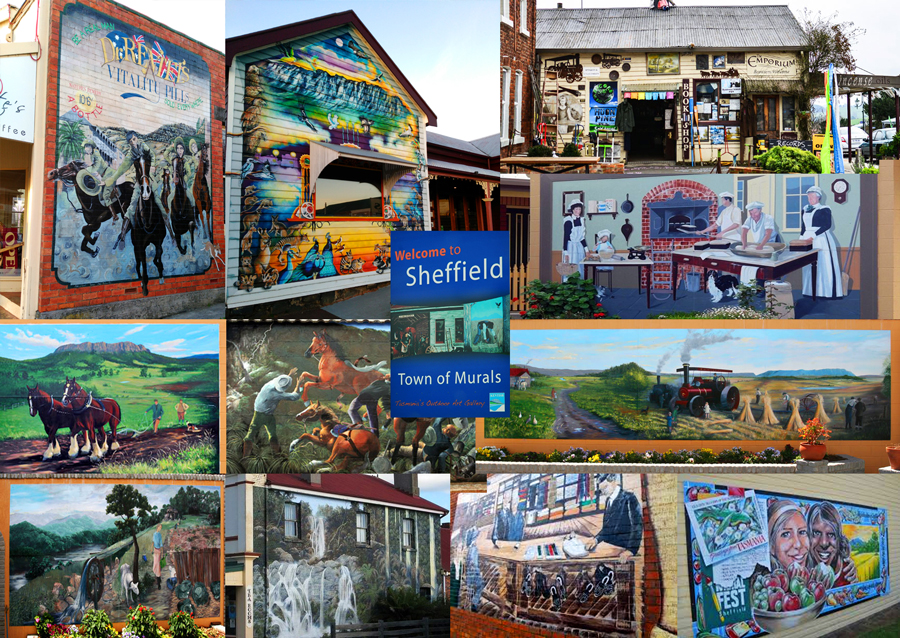 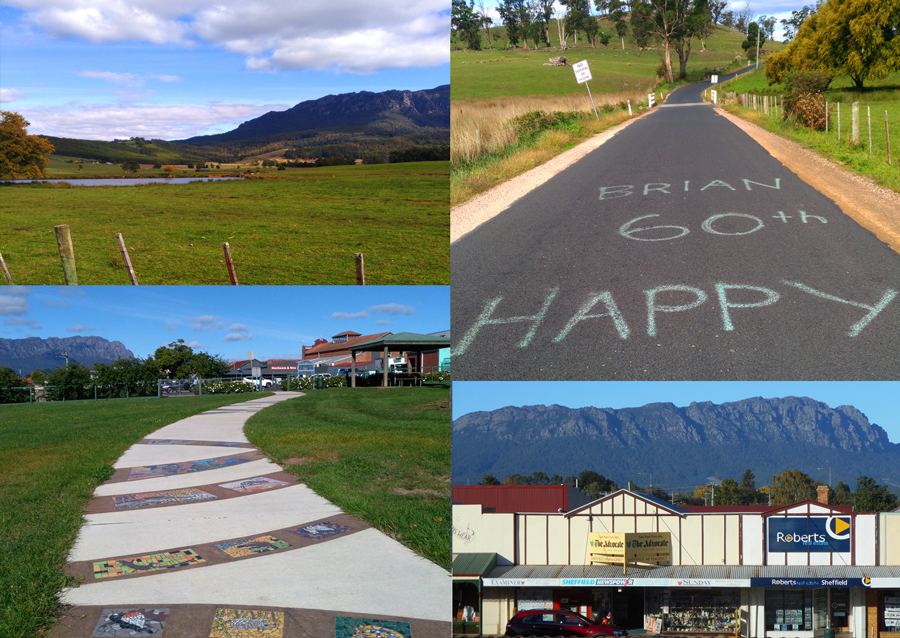 Mount Roland, on the northern edge of the Great Western Tiers, rises 1,234 metres and overlooks the town of Sheffield. 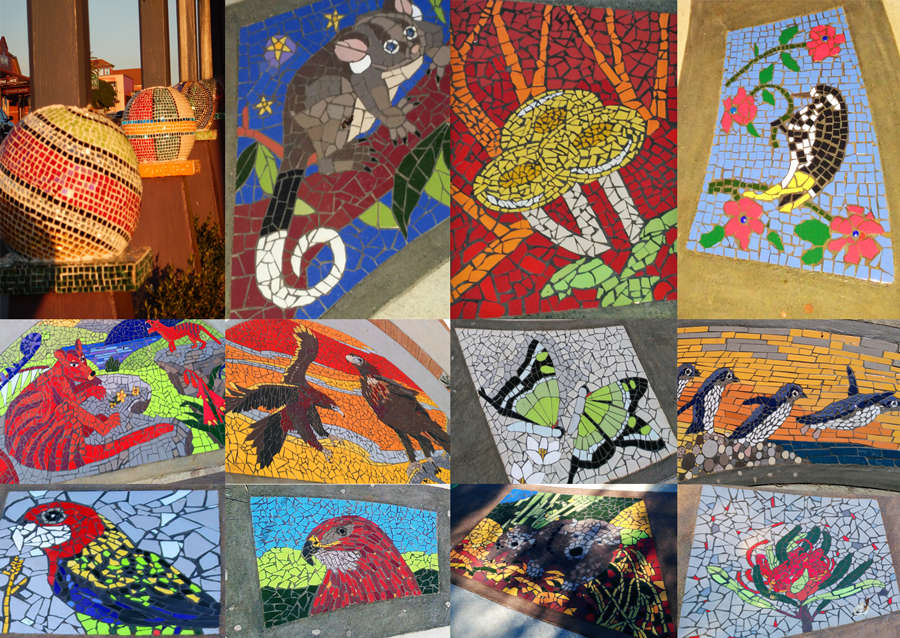 Mosaic art is everywhere in the town, including all along the pathway in King Georges Park. 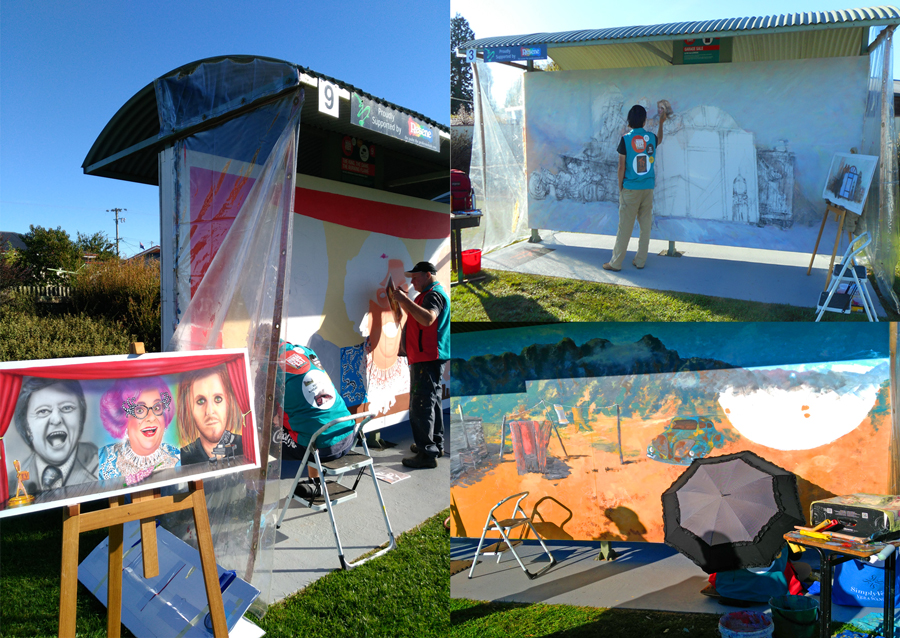 Finalists in 2016 MuralFest included ‘The King, The Dame, and The Burning Flame’ (Kerry and Daniel Nicholson); ‘Garage Sale’ (Wei Laun); and ‘Yesterday and Tomorrow’ (Eileen Gough and Karen Armstrong). 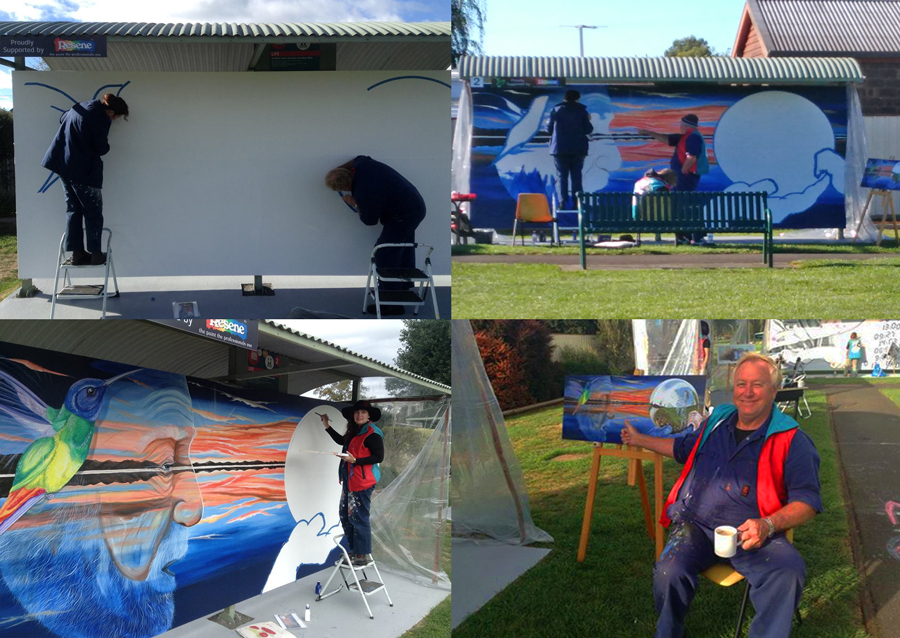 Patricia and Olly Grohs work for several days on recreating her piece ‘Life’ in mural form. 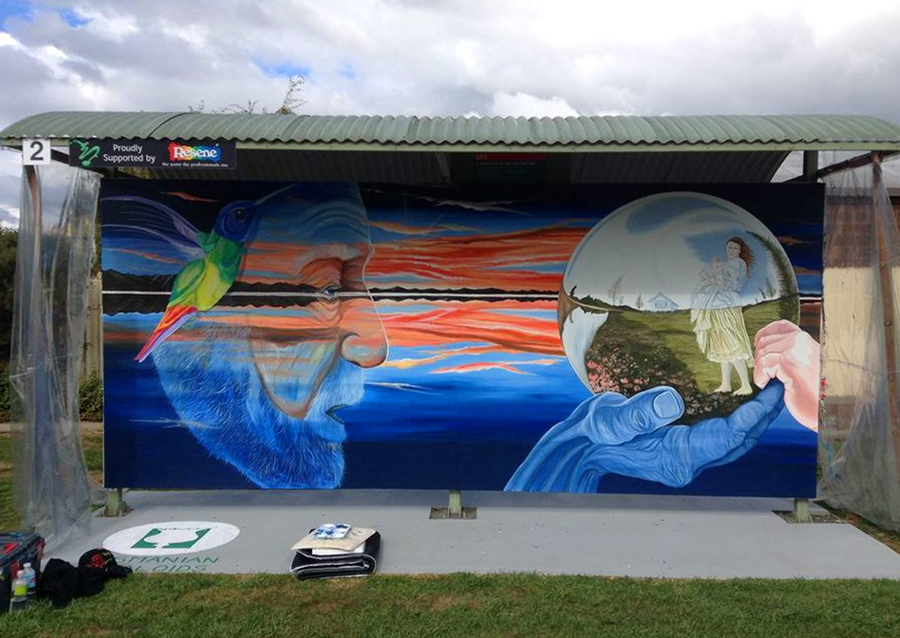 In ‘Life’, “the old man holds onto faded memories of his home, young wife, and baby. A bright future is promised in the new dawn of fresh air, clean water, and a new generation”. Brian is part of the blue paint on his forehead.