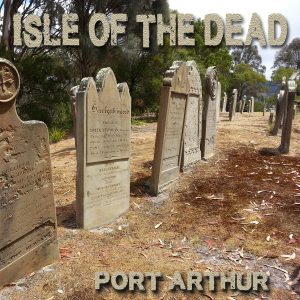 Cremation was always the exit choice for Brian’s mortal remains – he didn’t want to be stuck in one place and whenever he saw a neglected or vandalised grave it only reinforced his decision to spread out. This drop would probably be the closest he came to a cemetery.

I was at Port Arthur with Sharon and Glenda, two dear friends and one half of Sistas Negotiating the Overland Track. Our other SNOT Rob had already seen most of the state and would join us in two weeks for our long-trained-for six-day trek from Cradle Mountain­ to Lake St Clare. Sharon had also seen much of Tassie but wasn’t about to miss out on a road trip with the Sistas and would be our driver/guide.

Hobart had been a good mix. We visited our friend Fi’s Orangutan Project stall at Kingston, finally saw Tassie devils up close at Bonorong Sanctuary, sampled as much of the local produce as possible, and shopped lite at the Salamanca Markets… where we learned there’s a less than flattering name for people who trek the Overland without sleeping rough. (Wine and a warm bed over wet socks and wombat breath? No contest.) We checked out the unique Museum of Old and New Art and while some exhibits try a bit too hard to shock and just come off as pretentious, MONA is well worth a visit as long as you can deal with 400 ultra-white vaginas winking at you from a wall or the overpowering faecal funk of Cloaca. Undeterred, we rugged up and returned in the chilly dawn to catch the impressive Amarna light show.

When Fi heard we were going to Port Arthur and would do an ash drop on its Isle of the Dead she told us about her ancestor’s child who was buried there. Eliza Esther Connolly, daughter of the penal colony’s store keeper, had died in 1873, aged four, when she was “fatally burnt in a bonfire”. As Brian had loved Fi’s energy when he met her I knew he would not object to settling in with one of her relatives, especially as the little girl shared his birthday of March 28th.

Port Arthur’s a contradiction of peaceful scenery and cold ruins that can still evoke its harsh history. The guide’s informative talk fleshed out the darkness of lives we could not imagine, and the rare and surprising humane intent in some of its rehabilitation programs. The shell of the Broad Arrow Café and the memorial garden are a low-key but respectful tribute to the 35 victims of Australia’s worst (modern day) mass shooting but the 1996 murders are not a focal point and the killer is not mentioned anywhere.

We took the ferry to the Isle and I waited until the walking tour concluded to approach the guide. Along the way we had found Eliza’s grave and when the talk wound up I asked if I could go back and do a quick drop there. Again that word: no. I was still assuming my grieving widow status would score me a few concessions but it was obviously losing its edge. The guide was more concerned with roping in the ramblers and getting them back on to the ferry and was adamant there was no time. Pfft – I could have galloped back there and done the deed in a minute but the cattle prod was employed and all we could do was step aside at a random unmarked headstone, chuck the ashes, take a pic, and rejoin the Ikea-like plod to the jetty. Oh well, Brian always did feel for the underdog and the unnamed convict would probably welcome the company.

No bunny sighting to speak of, unless you count the ubiquitous roadkill we saw every day of our Tassie travels. Among the furry body count there would undoubtedly have been several rabbits.

Back on the mainland we followed the cryptic clues set by my sister Cathy, a Shawshank Redemption tragic, and eventually found the stone under which she had hidden some ‘treasures’ a few months before. We had done the same the day before in the quaint little town of Richmond and both times Sharon and I were boggled by her directions (she just can’t count). Leave it to Glenda and her deviously clever mind to decipher them.

We returned that night for the Ghost Tour, though our cynicism gave us immunity to spooking. A few odd things happened – maybe – but more likely it was just Glenda goofing around. She insisted the back poking must have been “the ghost in the blue dress – or [inset wail] maybe Brian…”. I’m pretty sure it wasn’t either, though Brian wouldn’t be short on motive. He could have been teaching me a lesson for my love of scaring the kids when they were little… or maybe he was just a bit ticked off about the indecent haste of his most recent drop. 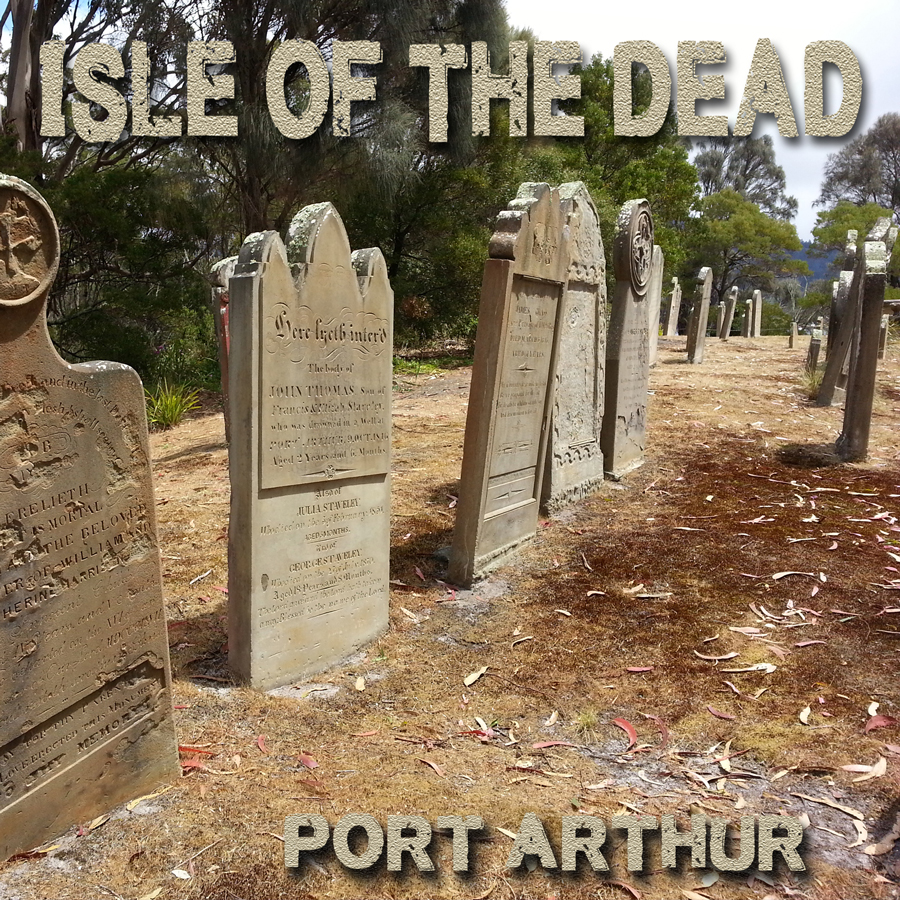 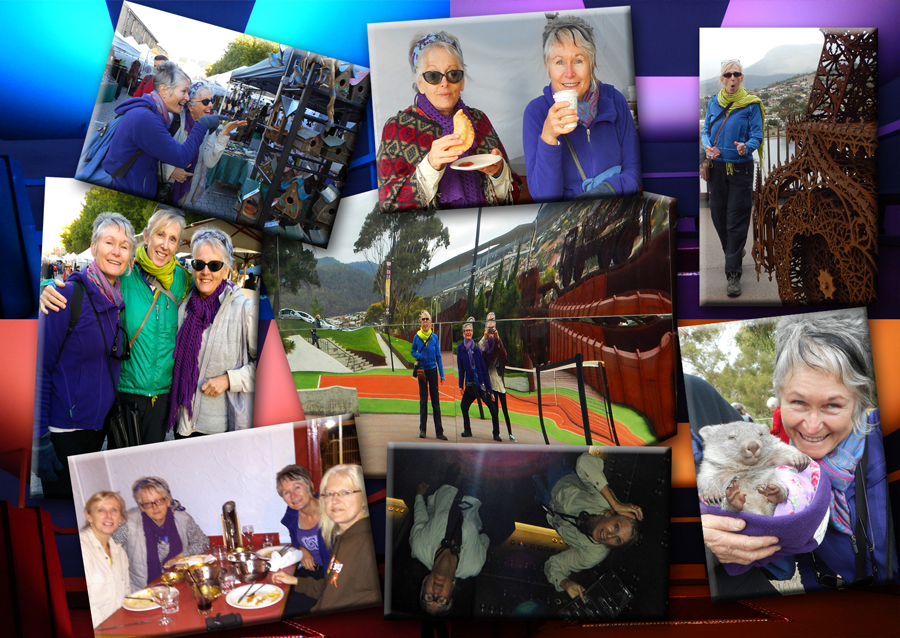 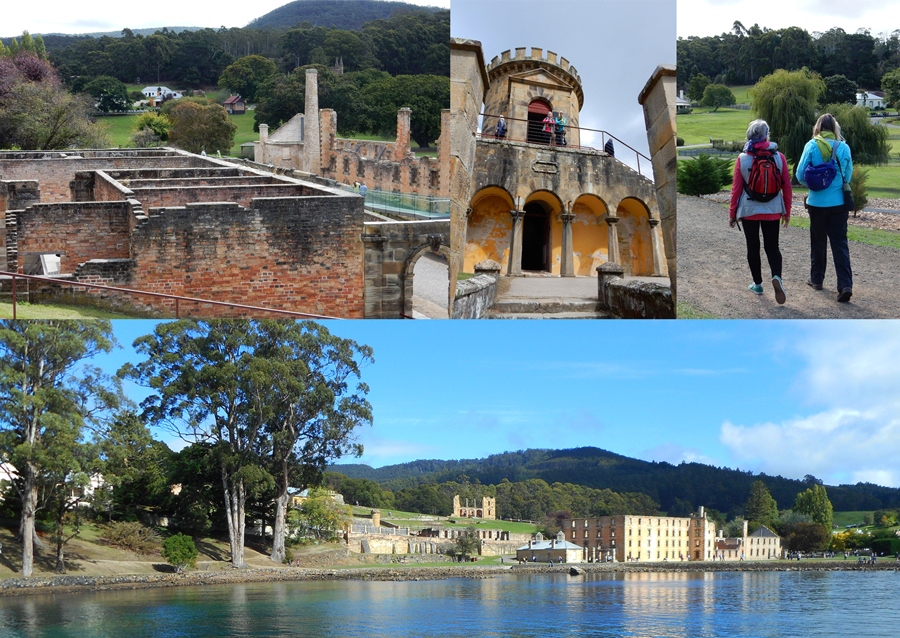 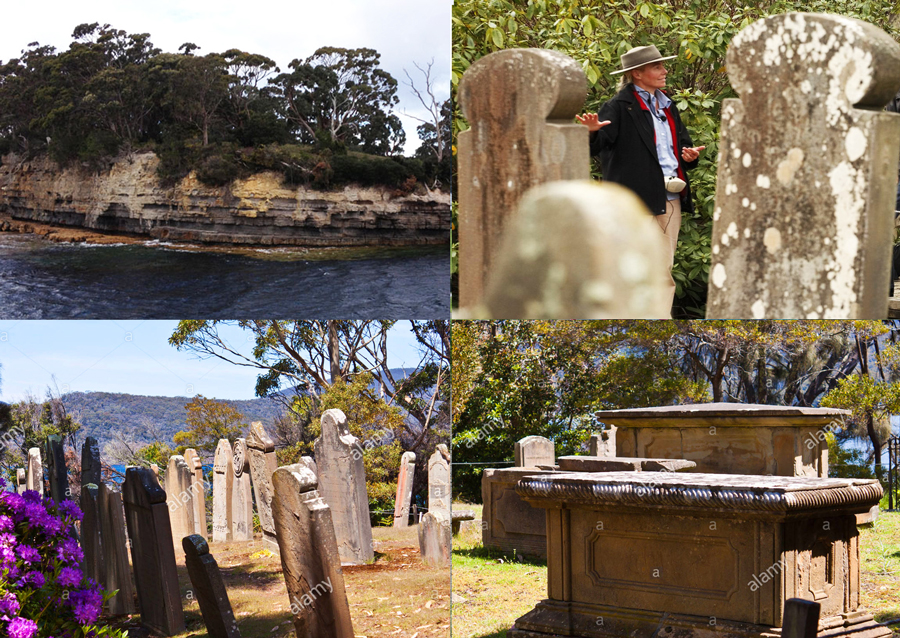 On the Isle of the Dead, Port Arthur’s historic cemetery. 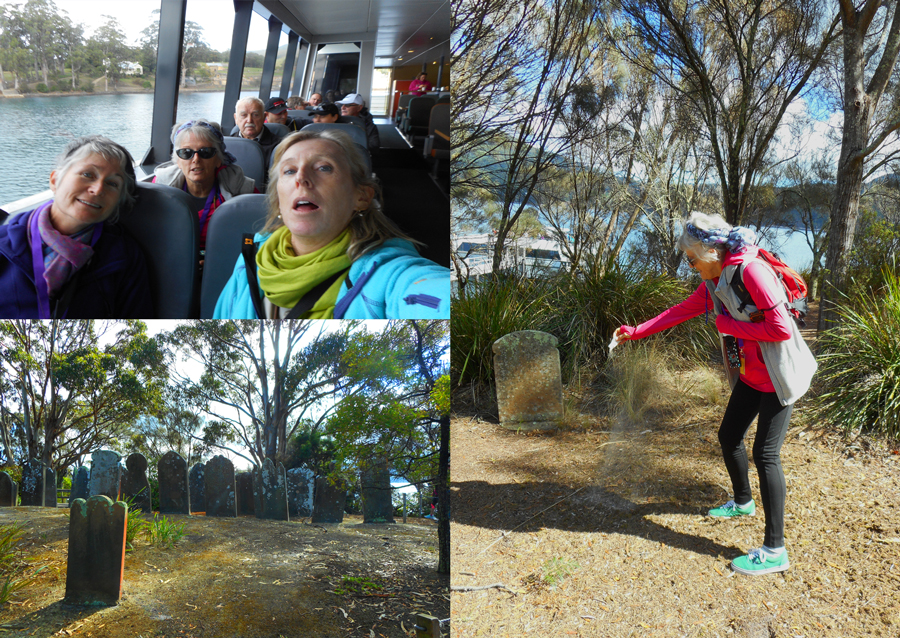 On the ferry to the island, and a very rushed scattering. 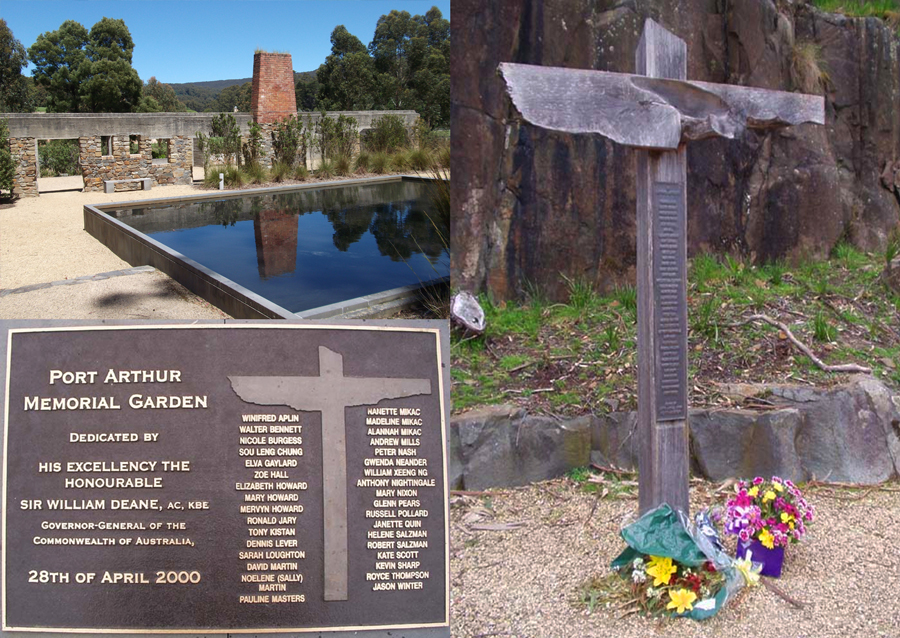 The Memorial Pool in front of the shell of the Broad Arrow Café, and cross and plaque honouring the 35 victims of the 1996 mass shooting. (For some reason there are only 34 names listed on the plaque – missing is Raymond Sharpe, killed inside the café.) 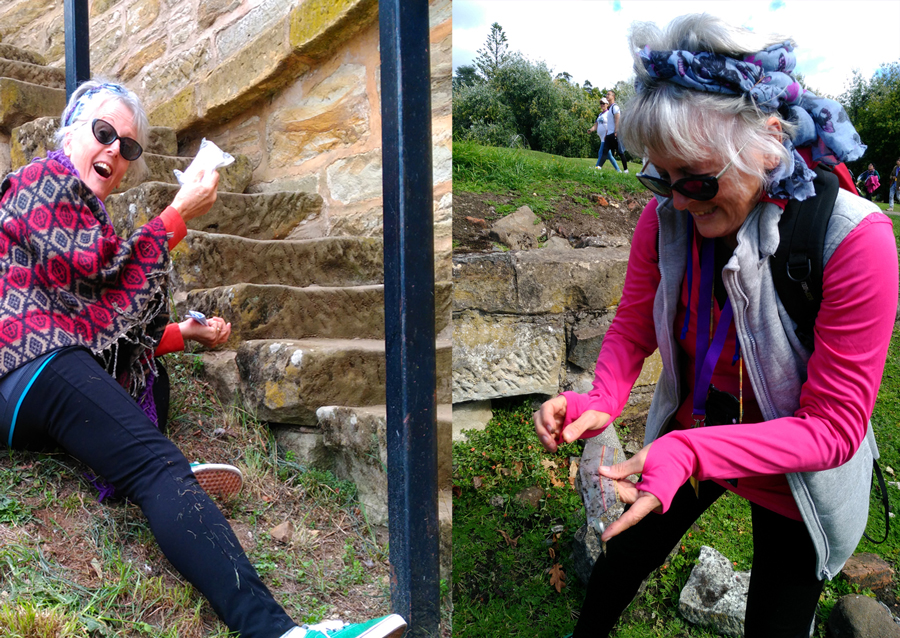 Following Cathy’s clues led to the hidden ‘treasures’, beside the bridge in Richmond, and near the ruins of the asylum at Port Arthur. 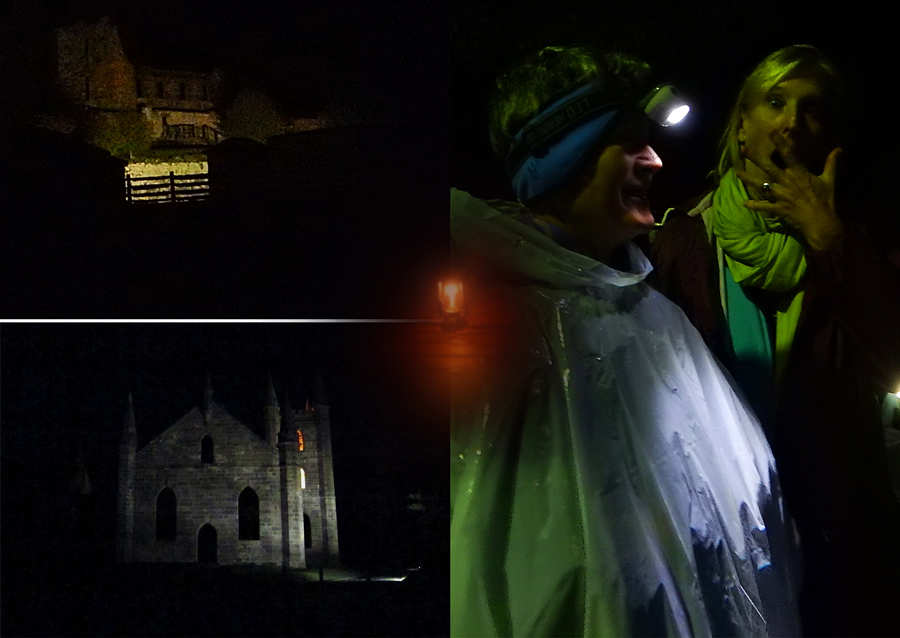 Everything about the Ghost Tour atmosphere – the dark and rainy night, the brutal history of the settlement, the haunting tales and the spooky ruins – should have scared the bejesus out of us… and probably would have, if not for the unruly Sista.