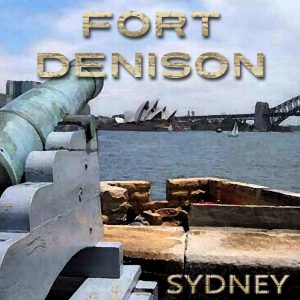 The former penal site in the middle of Port Jackson had no connection to Brian, but that harbour… he’d talk fondly of the years he lived in Cremorne and rode the ferry to and from Circular Quay, and couldn’t understand my meh attitude to the ‘excitement’ of being that close to the CBD. His passion for the place translated into stacks of undated photos of the Bridge from every angle and of grinning strangers on yachts.

His last trip to Sydney was also his last Christmas, and he was pretty frail by then. We would have given the long drive a miss but Mum was in Royal North Shore Hospital after a serious car accident earlier that month and he was determined to visit her while he could. As his condition deteriorated that same stubbornness fought against using mobility aids (“One more damn surrender”) but when he asked could we take him into the city so he could see the New Year’s Eve preparations, even he accepted the wisdom of a wheelchair.

On that occasion the harbour was spectacular. A pleasant mid-20s temp with plenty of music as bands and other acts rehearsed, and so much colour as every type of craft packed the water. Even the crowds pissed me off less than usual and when our nephew Hamish manoeuvred the chair around the forecourt of the Opera House people gave them enough space that Brian didn’t feel overwhelmed or in the way (his persistent fear). He made the most of his digital SLR and from the eastern promenade took shot after shot of those landmarks he loved. The Fort (aka Rock Island, Mat-te-wanye, Mallee’wonya and Pinchgut) wasn’t on his original list but he definitely would have approved of its inclusion.

When I sprinkled some of him there just over two years later Aaron was with me. We thought a Bridge climb would have made for a dramatic launch but besides the ban on carrying anything up there (I briefly considered doing an Andy Dufresne and making a hole in the pocket of the boiler suit so I could surreptitiously shake him out the legs) there was a long lead time for booking and a no-cancel policy. The pylon lookout was another option but I didn’t want him landing on the road – our Brian deserved more than the Cahill Expressway in peak hour.

I’d never been to Fort Denison but it had fascinated me ever since I learned that the cannon there used to be fired each December 4th to mark the Feast of St Barbara, the patron saint of gunners. The island has clear views of most of the harbour – a vista so stunning that when Francis Morgan was executed there in 1796 he told the hangman that “No waters the world over could compare with it for beauty.” But the observation earned him no favours and his remains were left hanging in chains for several years after his death. Just one anecdote from the brutal and intriguing history of Pinchgut (so nicknamed because convicts were restricted to minimal rations of bread and water).

We scattered Brian to coincide with the 1pm firing of the cannon by the National Parks and Wildlife guide, Peter Vaughn. Peter was our new best friend and later allowed us a private tour of the sandstone martello tower, the only one ever built in Australia (guide-only tours were the rule as tourists were nicking artefacts, including the 14.5kg cannon balls). Solid, with walls up to 6.7 metres thick, it was built to protect the colony from foreign invasion but was never used for that purpose; the only ammunition to ever hit the tower was friendly fire from a US ship, when two Japanese submarines were sighted in the harbour in WW2. Its construction missed the mark a bit – the wall opening was too small to use the weapons effectively (by the time a cannon was loaded any invading vessel would have sailed past) and the room itself was too cramped for the powerful recoil. When developments in artillery made it largely obsolete, all the guns were removed – except for three that were installed before construction was complete and were now too large to be taken down the narrow staircase.

The cannon fired and off he went over the southern parapet, into his beloved harbour… almost. Near the edge of the thick sandstone wall he stopped and refused to go any further. My arms were about a metre too short to brush him off so a stiff ocean breeze would have to take him the rest of the way. I had forgotten all about a rabbit being present at this drop and possibly that oversight jinxed his landing – or maybe, like Francis, he just preferred a resting place with a view. 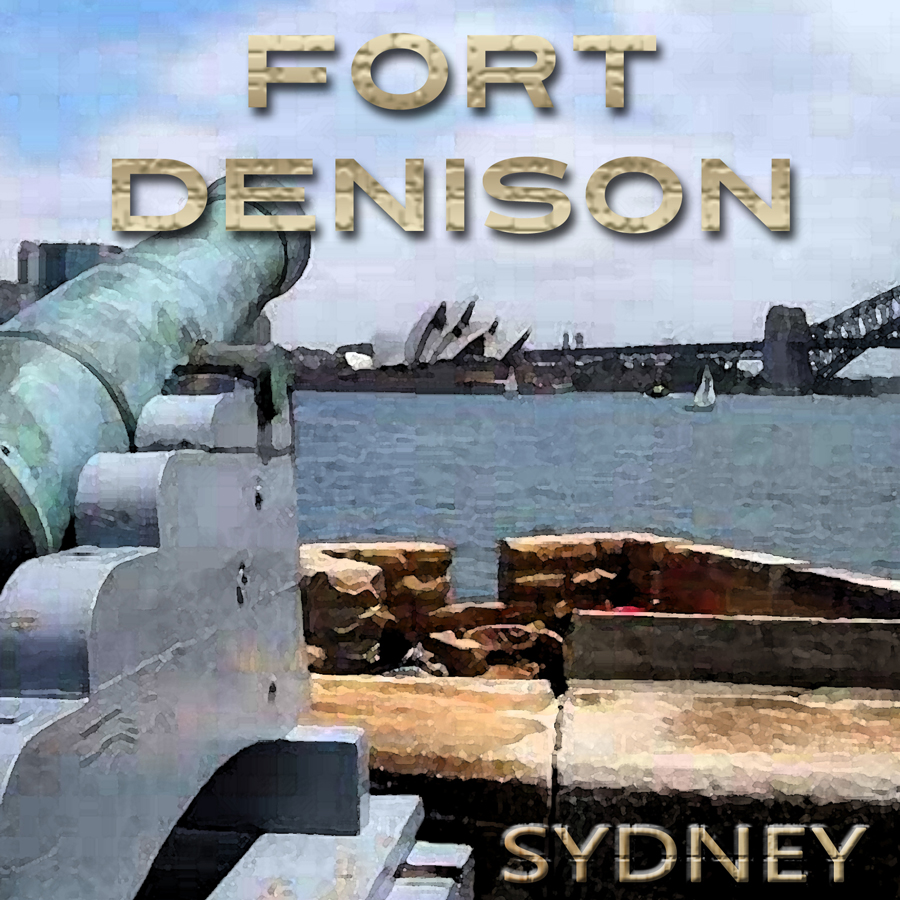 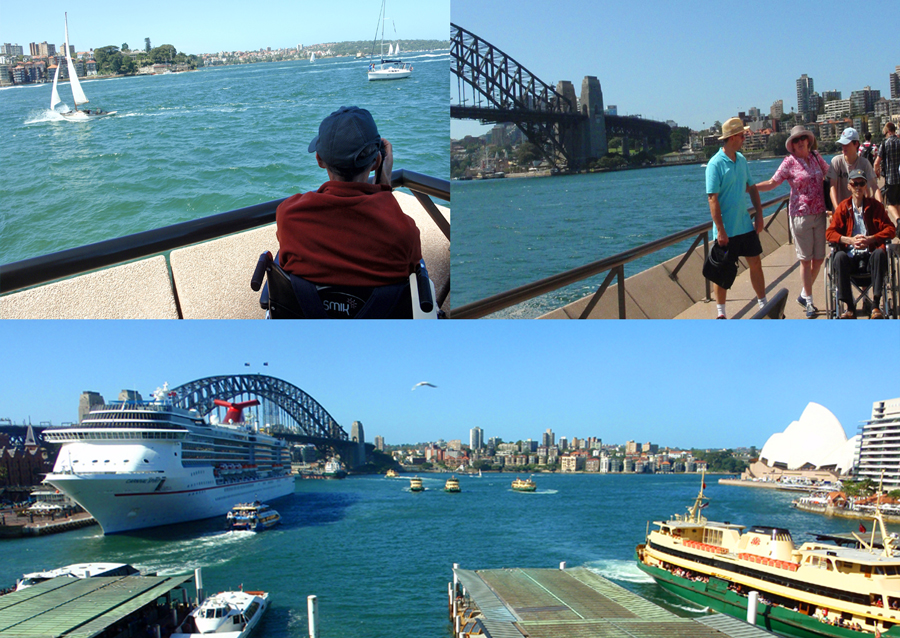 Brian on his last visit to Sydney Harbour, on 30 December 2013, with (top right) Dominic, Karen and Hamish. 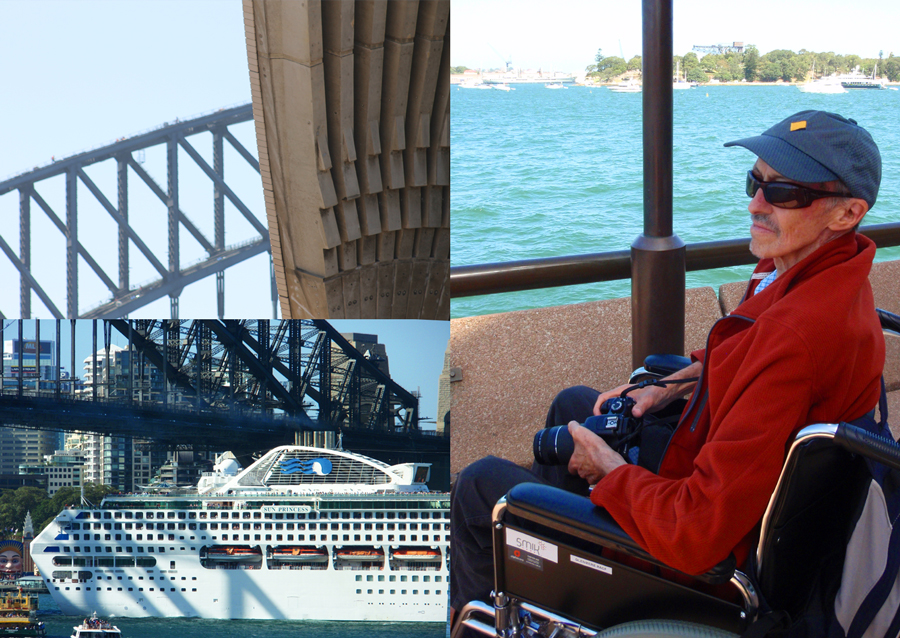 The camera… always with the camera; he got some top shots that day. 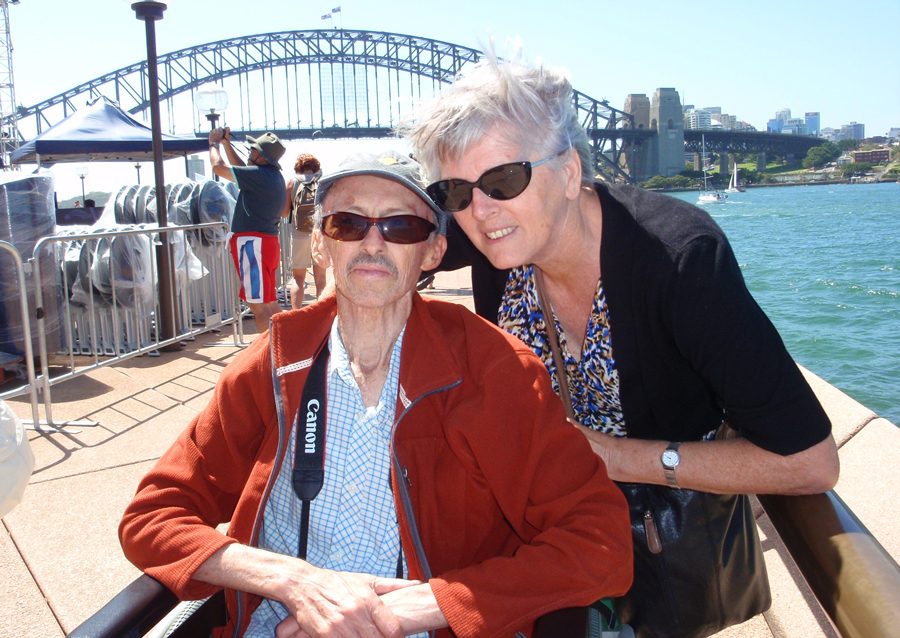 One of our last pictures together. 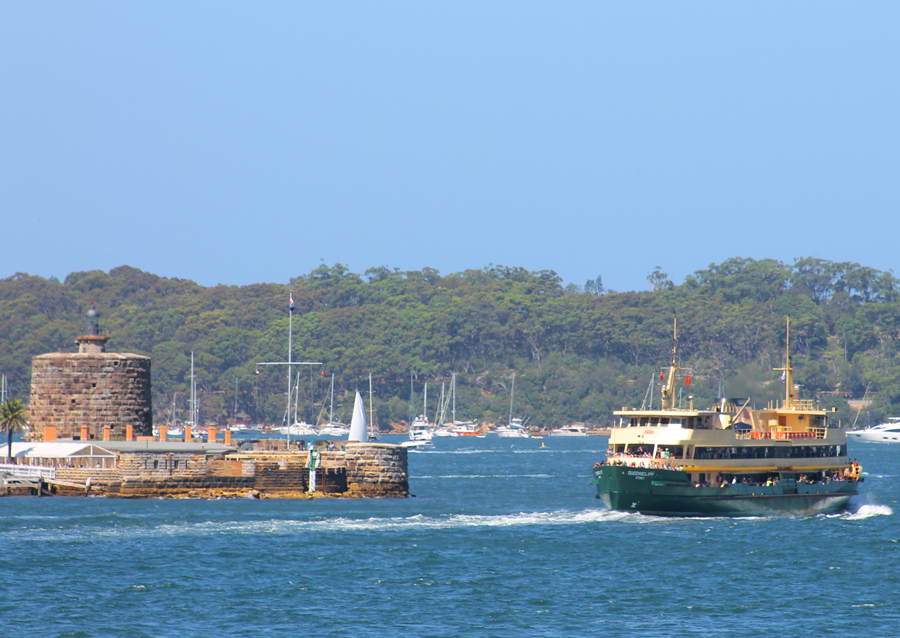 A photo Brian took of Fort Denison that day. 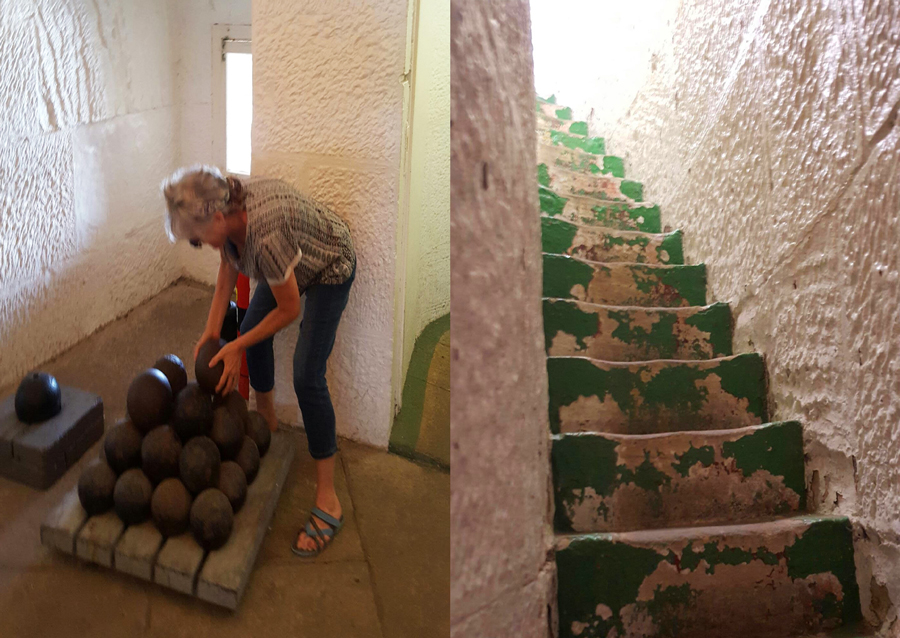 I put my larcenous tendencies on hold… they’re not the easiest souvenirs to pop into a daypack; the staircase up the Martello tower. 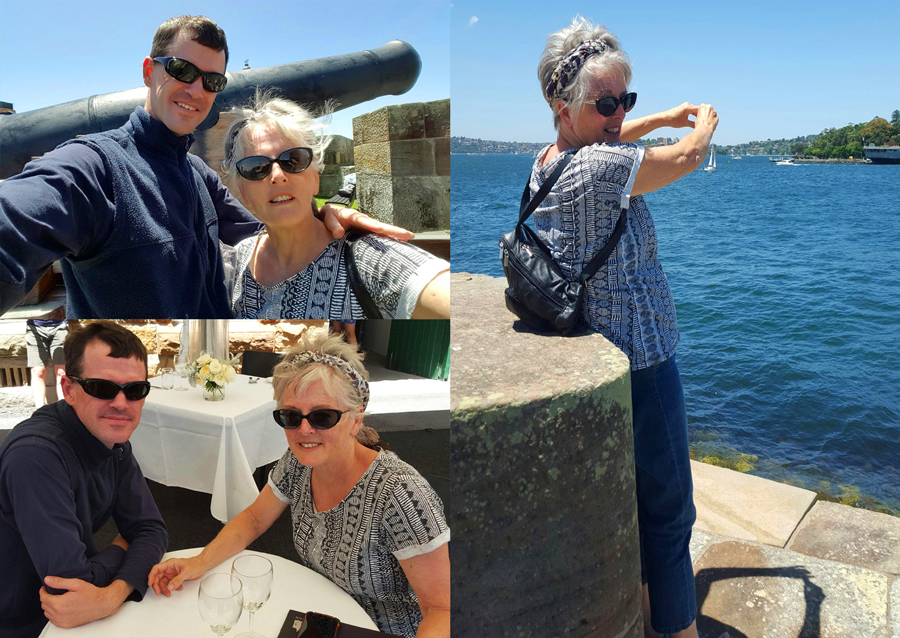 Aaron and I in front of one of the Fort’s cannons and lunch at the Fort Denison Restaurant; scattering Brian from the top of the wall, against the wind. 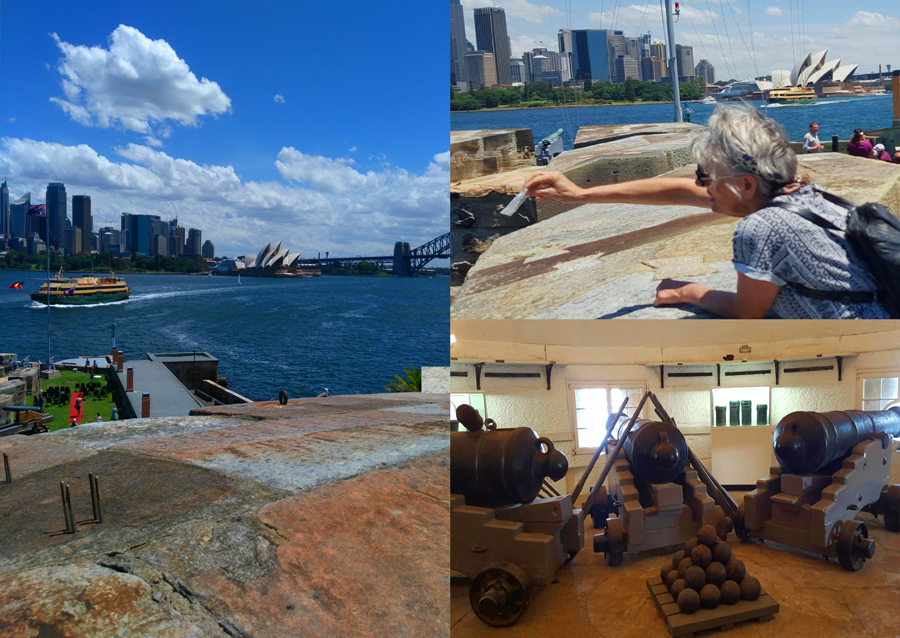 Looking down from the tower towards the Sydney CBD; trying to scatter Brian over the wall and (bottom right) the artillery room at the top of the tower.