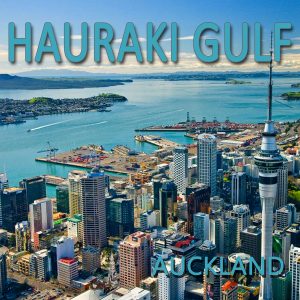 Being with Sam and Benny on their first overseas trip had been a hoot. Everything was new to them and their excitement with even the most mundane aspects of flying and road tripping was infectious. It turned out to be an every-kid’s adventure as they explored glow worm caves at Whangarei, steered the yacht Fearless on Lake Taupo (and sniggered when the captain’s daughter warned them to be careful of the “sleppery dick”), walked through a giant beehive at Arataki, skylined up Mt Ngongataha and luge raced down, jetboated at Paihia, made friends at a farmstay in Opononi, did the haka at Tamaki, learned all about the eco-menace of possums in Napier, and told endless fart jokes about Rotorua’s sulphide funk.

It was all way too much fun for me. After 10 days the car was feeling like a terrarium so when Brian and Les wanted to take the boys to the Sea Life Aquarium I opted for some me-time and booked my holiday hair in for a workover. Because I mentioned I was getting married later that day a ‘special’ charge was applied (grrr!) but, as ever, my pique was calmed with chocolate and some op shop therapy.

When the men arrived home only an hour before the celebrant the boys’ energy levels were still high, as was Brian’s. He raved about the Gulf and how I must see it one day, only interrupting his rhapsodising to sniff his armpits and say “I should be right without a shower” before buttoning up his shirt and smoothing down a couple of rogue hairs on his head. We wed, but that night the positive reviews weren’t about me.

“Pity there’s no time to get up the Tower. You’d see right out to the islands from there…”

And you could. Dan and I caught those high-rise views the day we arrived and were now taking them in from sea level, sunning ourselves on the deck of a ferry chugging across Waitemata Harbour. This last day of our holiday was shaping up to be a good one – weather balmy, mood relaxed, and a ticket that included a bus tour of Waiheke Island. Promoted as “light-years from Auckland and the world in general” the island is only a little way offshore but has, officially, 100 more hours of sunshine each year. As Bowen is to Vancouver, Waiheke is the laid-back alternative to NZ’s largest city.

On that summery day we breathed in the views as our bus chugged up from Matiatia wharf and over the hills that ran through the island’s settlements, past farms and vineyards and the white sands of Oneroa, Blackpool and Surfdale beaches. I waded into the surf at Onetangi for the first of the Hauraki drops (he would also go off the back of the ferry on our return trip) then we wandered across the road for a drink at Charley Farley’s bar, a beachfront institution that’s loaded with atmosphere. Then to Oneroa village where the quirky wares prodded my listless shopping appetite and we stocked up on gifts for the boys and Dan’s Heidi. It was such a blast to see him so besotted and I’d also come to love this girl, as would Brian if he’d had the chance to meet her. His final wish was to see all his sons in healthy, contented relationships and on paths that led somewhere positive. It was early days with Heidi but so far she was ticking all the boxes.

As we ambled back down the hill to Matiatia I thought again how much Waiheke reminded me of Bowen. The weather is warmer and the yams are called kumeras but some things are common to both: a simple infrastructure with limited services, an arty culture and a strong environmental focus. And controversy… the community here had united against a proposal for a major shopping and hotel complex, and a luxury marina that would “ruin” the island’s rustic character. But Waiheke is not anti-tourism ­– Lonely Planet rated the ‘Island of Wine’ as the world’s fifth best destination to see in 2016, while Condé Nast Traveler threw around “paradise” and “escape to” and placed it fourth on its Best Islands in the World list.

It’s also known internationally for its biennial Sculpture on the Gulf exhibition along a coastal walkway on the western end of the island. We were there in the right month for this popular event… just the wrong year. Unfortunately we also missed another sculpture that would have made a smashing bunny sighting: Paul Dibble’s Rabbit Fights Back II, in the Sacred Blessing Sanctuary. Not sure I could convince Dan to visit a place with a name like that (even if we’d known it existed), especially if he heard the tall bronze statue with the gun described as “an interesting juxtaposition of nature, irony and mankind’s comedic take on rabbits”. I can just see the what-a-wank eyeroll he would have exchanged with Brian. 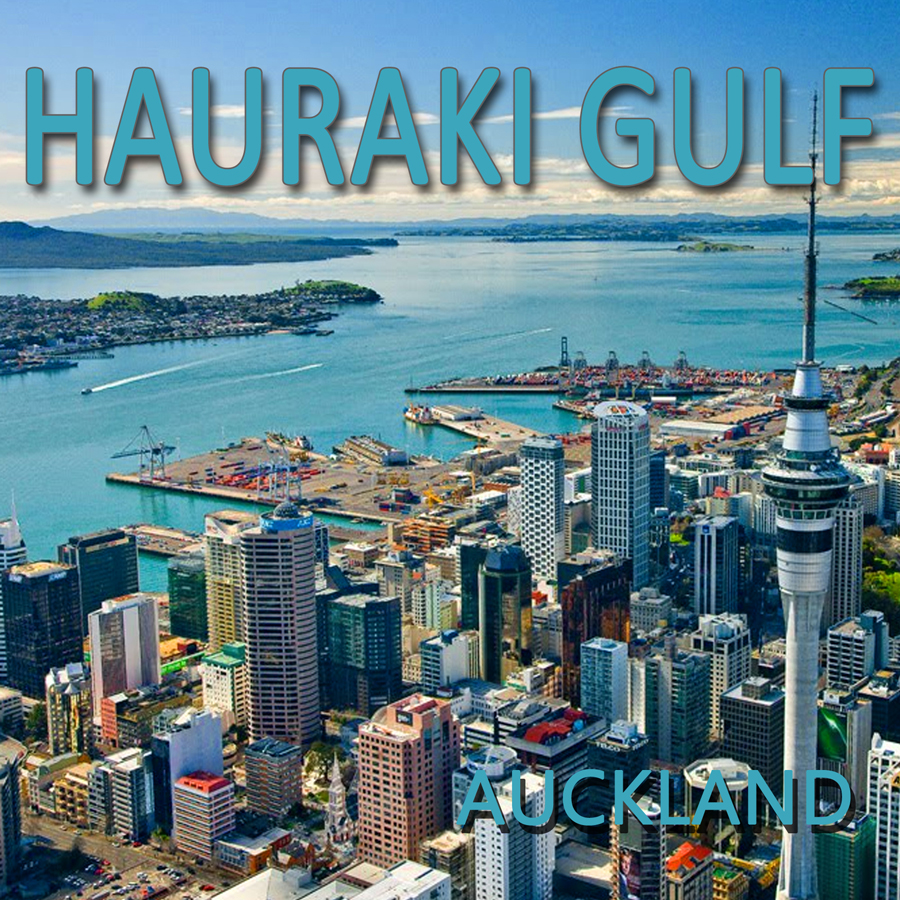 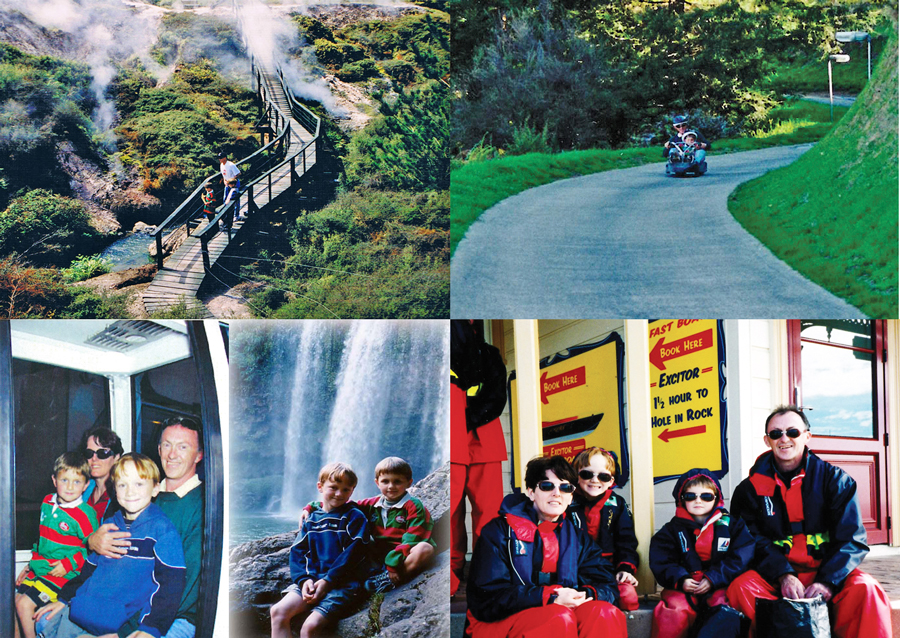 Our holiday on the North Island in 2001 included luging, jet boating, skylining, and visiting the thermal pools and geysers in Rotorua.

The view of Hauraki Gulf from the observation level on the Auckland Sky Tower. 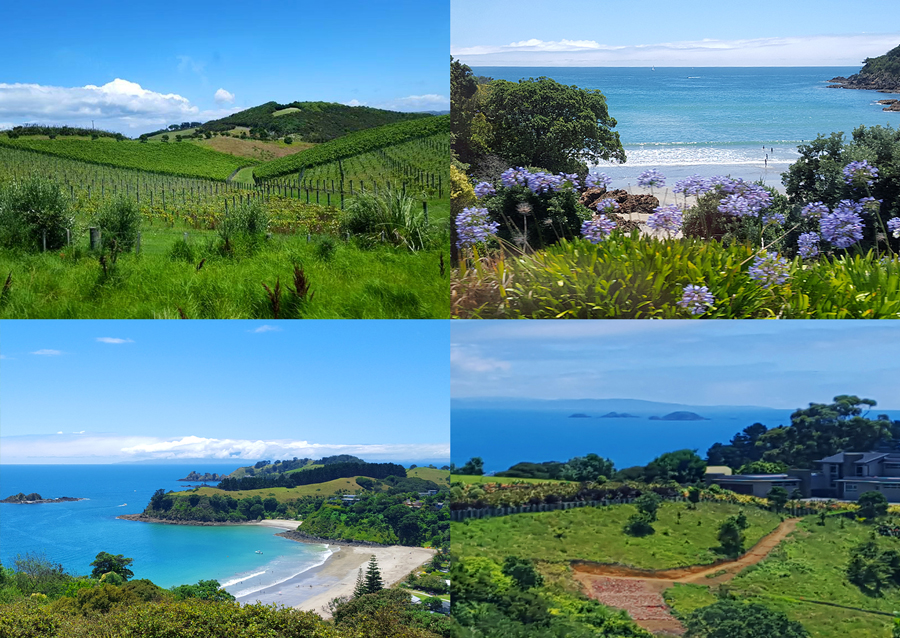 Around the beautiful Waiheke Island. 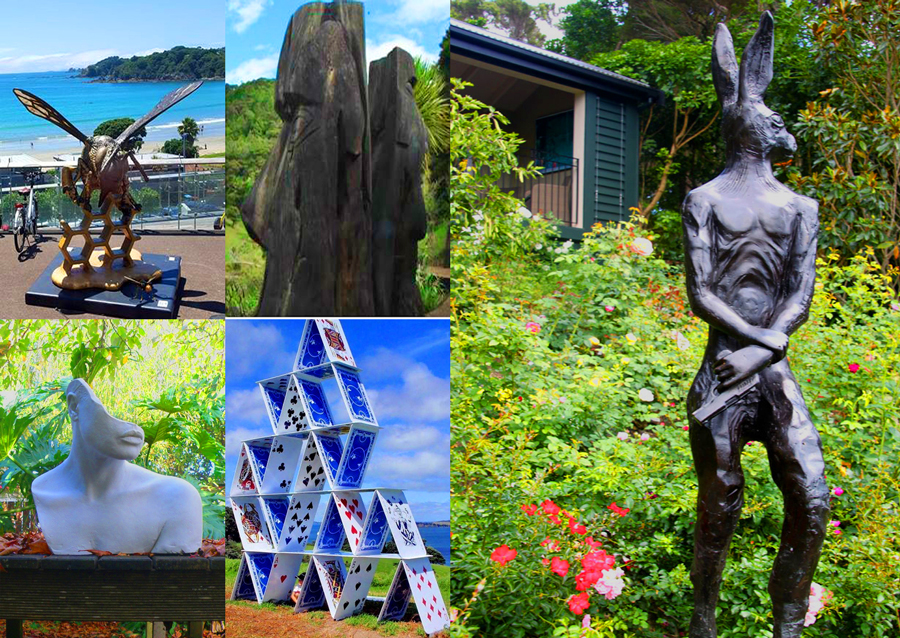 Sculptures and other pieces around the island. 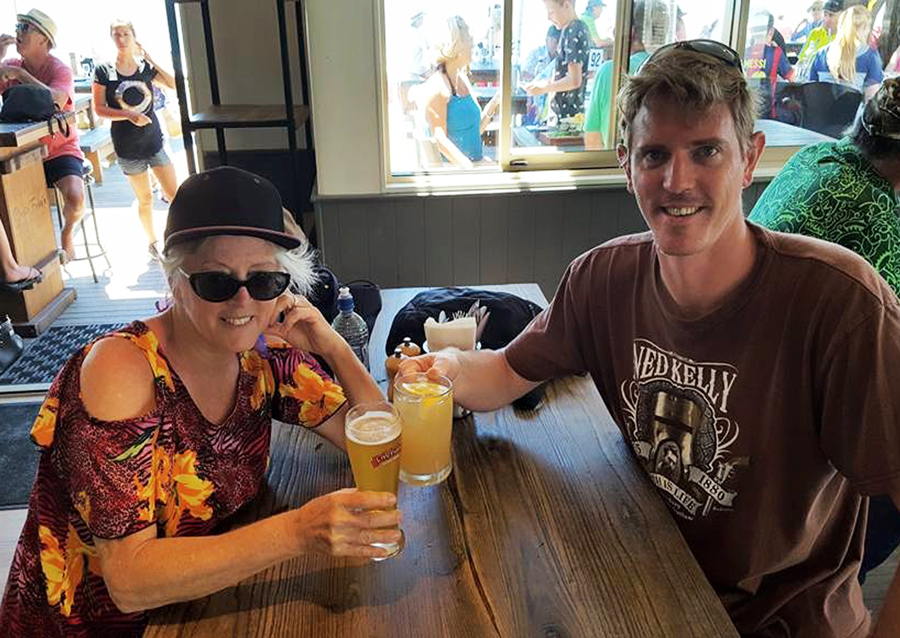 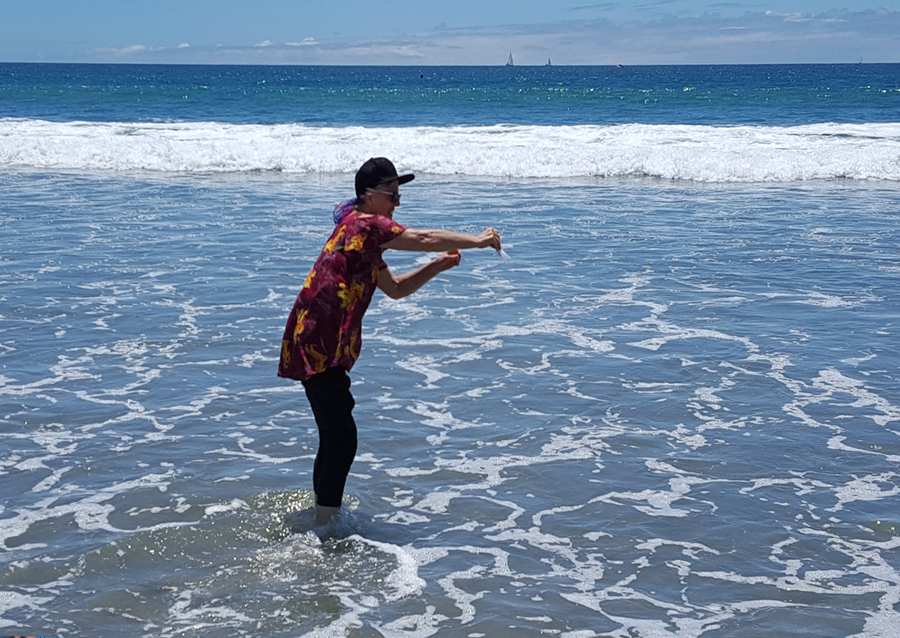 Scattering Brian in the surf at Onetangi Beach. 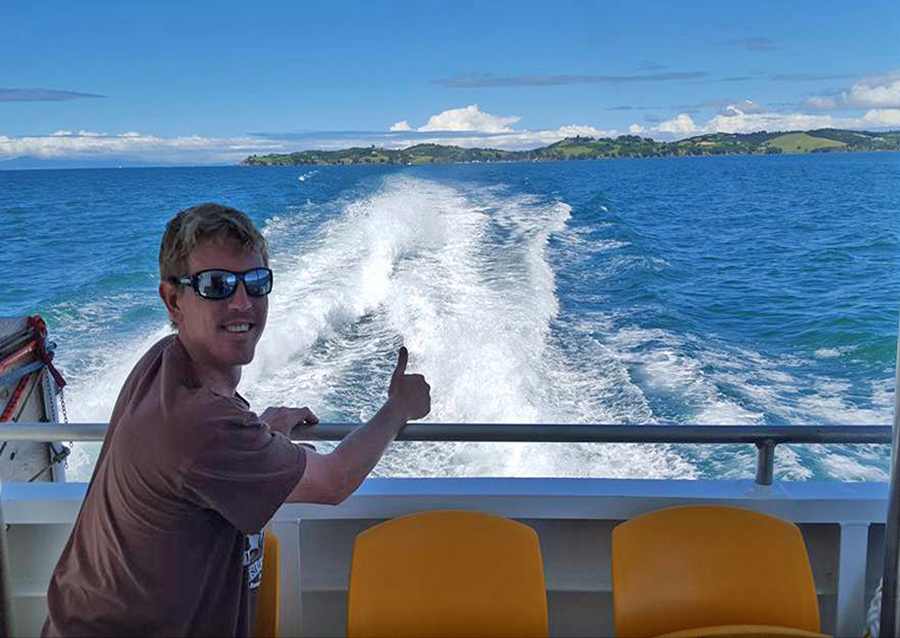 Just after Dan scattered Brian off the back of the Fuller’s ferry returning to Auckland.