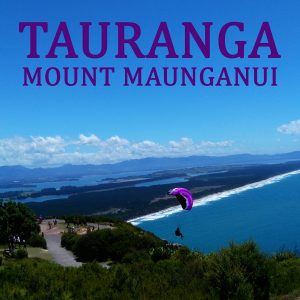 The boys and I once arranged for Brian to parasail on the Gold Coast – something he was adamant he wanted to try – but when the weather turned nasty his “Bugger” sounded more than a little relieved. Though the retelling had him totally bummed about missing out he always had a reason not to go back for another try. A few years later we shouted him a tandem hang-glide at Byron to celebrate his turning 58 and (it seemed) defeating the cancer, but that time the wind died and the operators called it off… and again his ‘disappointment’ sounded very suss.

Crunch time, old mate. Today there were just a few harmless horizon clouds in a crystal blue cooperative sky, and as I carried the bag of ashes towards a ginger haired guy with a parachute, I thought he can only say no, no harm asking. A small group was paragliding off the steep northern slope of Mount Maunganui and it would be a novel way for Brian to revisit an area he’d loved when we’d walked around it with the boys 14 years ago. Doesn’t hurt to ask – all he can do is say…

“No.” Oh. Ginger was checking his equipment and said he’d like to oblige but was a relative amateur and I should ask someone more experienced. Already on to it, I spied the purple and white canopy of William Gardner, adventurer at large. He was a more than willing vehicle and obviously knew his stuff.

Courtesy of Will’s good nature and some very accommodating updrafts, Brian was airlifted high over the rocks and a little way out from that beautiful coastline, and scattered wide. An audience of admiring spectators agreed Will had done a very cool thing and greeted his re-entry with some applause. Tossing some ashes over the Bay of Plenty hardly compares to the catalogue of extreme sports this Yorkshire daredevil has mastered, but he was into new experiences and this was a first for him. Brian would have been chuffed – he loved meeting new people, and Poms were one of his favourite species.

He would also be happy that we were finally even. Never let love get in the way of competition was our motto and my two parachute jumps gave me bragging rights when he started on about all his travels, and how he could reverse park with a trailer attached. (Dan had parachuted too but he’d been strapped to a professional while I had to plummet with just my terror and poor sense of direction for company.)

Mount Maunganui was one of the first places Brian put on the list and on this magnificent day you could understand why. An extinct volcano known as Tauranga Mauao, it was formed more than two million years ago and its significance in Maori mythology was recognised when the Crown handed it back to the Ngati Te Rangi, Ngati Ranginui and Ngati Pukenga nations in 2008. At 232 metres in height it’s only a pimple compared to New Zealand’s other peaks but the views from the top are still spectacular. You can see the Kaimai Range to the west, and to the north the entrance to Tauranga Harbour and the pine forests and long white beaches of Matakana Island.

Dan and I had walked up the western side of the Mount and descended on the east, with its spectacular views of Tauranga township, Papamoa Beach and the islands of Moturiki and Motuotau (also known as Rabbit Island, providing a very handy bunny sighting). I was a little giddy from the sun and the unexpected detour the ashes had taken this time and wished the other boys were with us to share the experience. A recent bushfire had cut off a part of the track but everything else looked the same. Brian used to call Ben Little Rainman because of his phenomenal recall and I’m betting our Wombat would have known exactly where we had stood that day, and probably the name and shoe size of the guy who took our photo.

Dan had a swim in the harbour while I tormented some plovers (those birds are so gullible) and after lunch we drove back to Auckland, stopping at Katikati for afternoon tea. The drive was pleasant and there was no nit-picking this time, each of us quietly confident the other was the self-involved one. Tomorrow we’d be heading west to the Waitakere Ranges to do a drop at Fairy Falls, near Waiatarua where Brian and I got married, but today’s highlights would be a pretty hard act to follow. Not just because of the contrast of the two ash scatterings – one in a damp, dark tunnel and the other off a sunlit mountain – but the gallantry of a delightful stranger named Will. 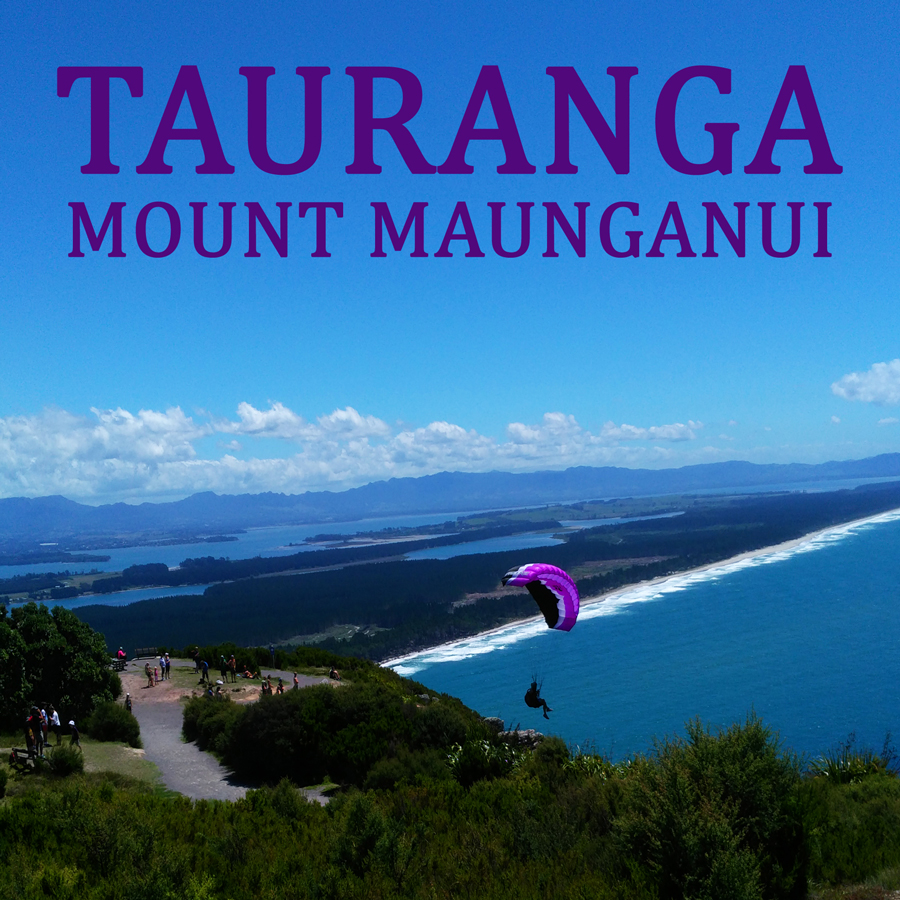 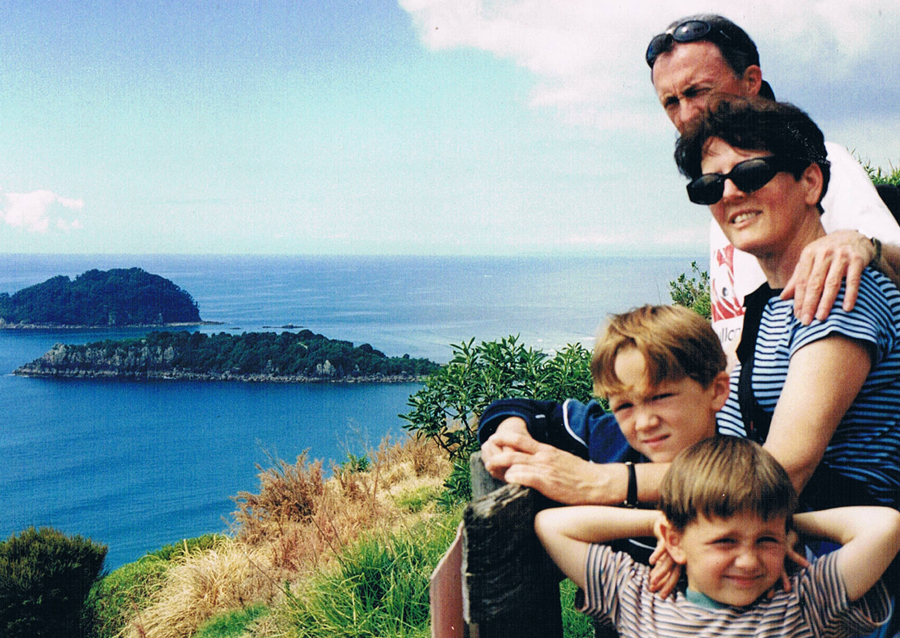 At one of the lookouts on the eastern side of Mount Maunganui. Motuotau (Rabbit) Island is the smaller of the two in the background. 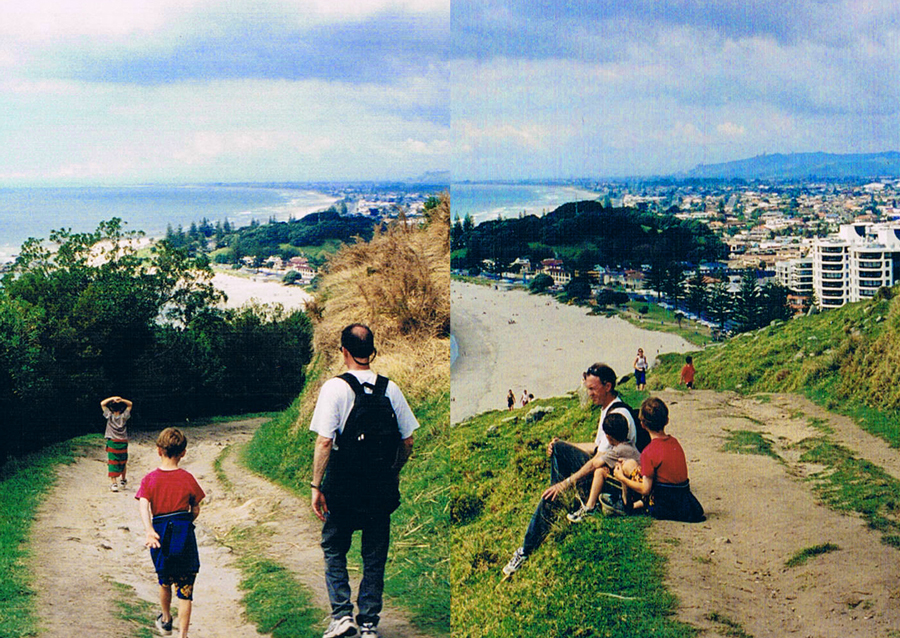 Brian and the boys on the descent to Tauranga township. 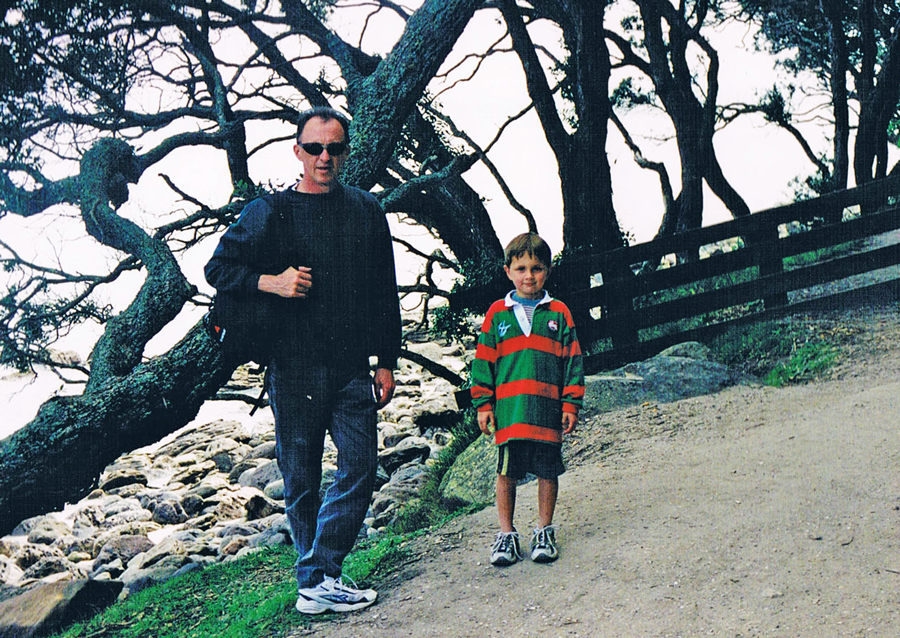 Brian and Benny before the trek to the top of the Mount. 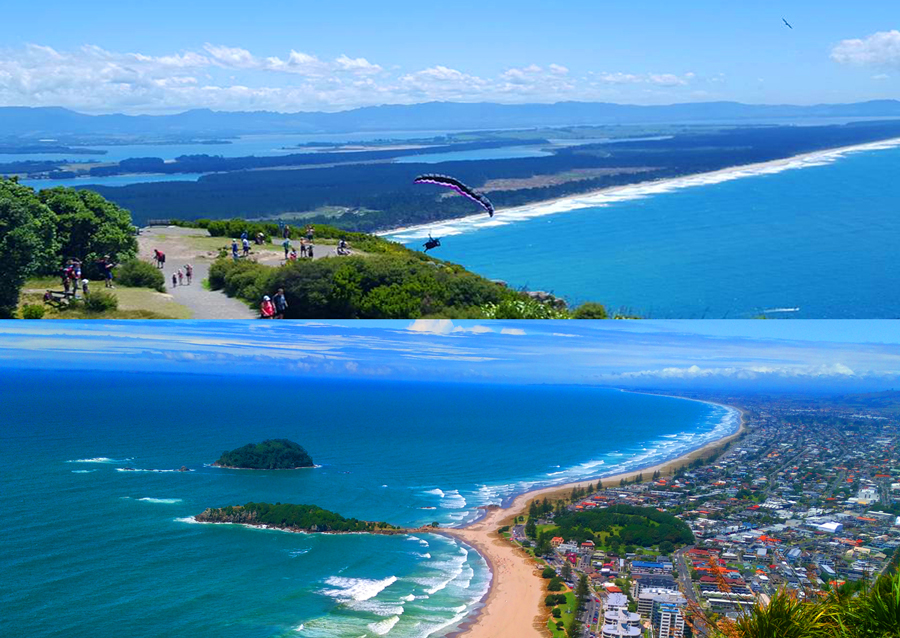 The view north and south from the peak. 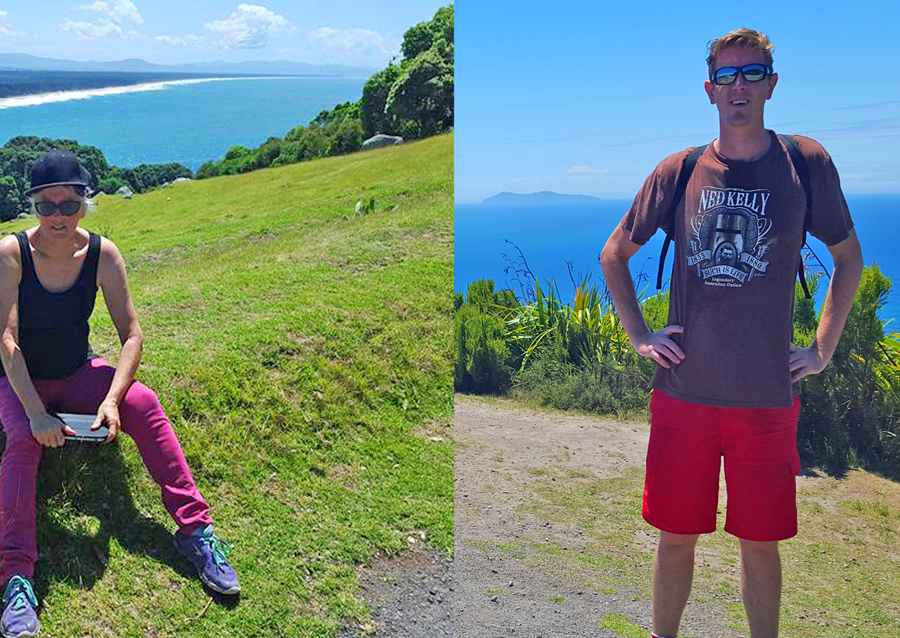 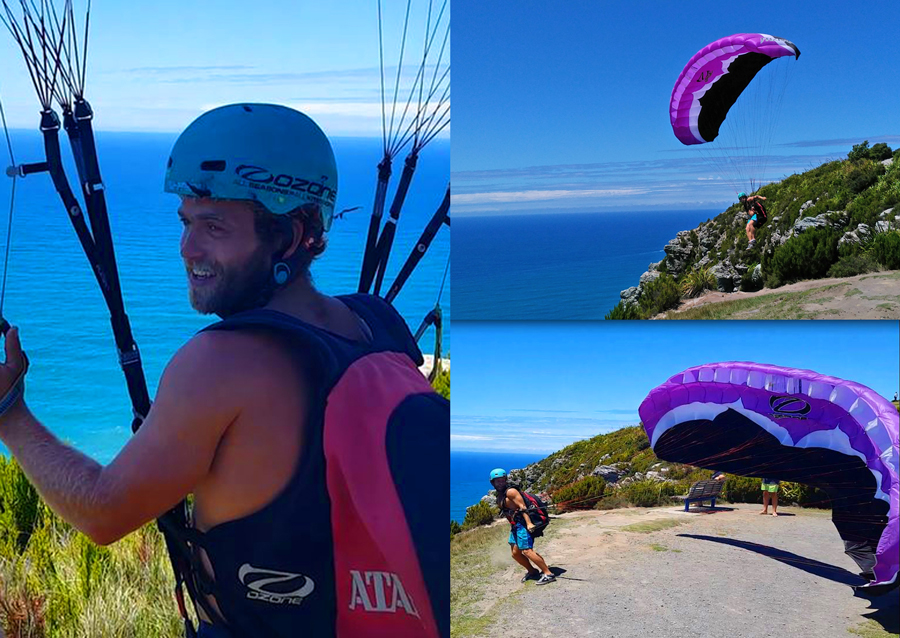 The very cheerful Will Gardner. 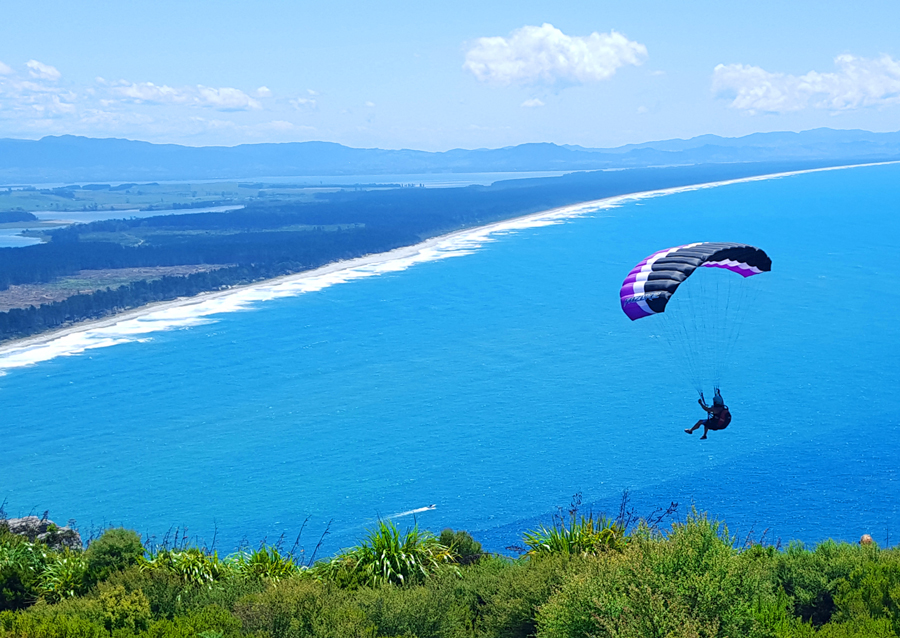 Looking across to Matakana Island. 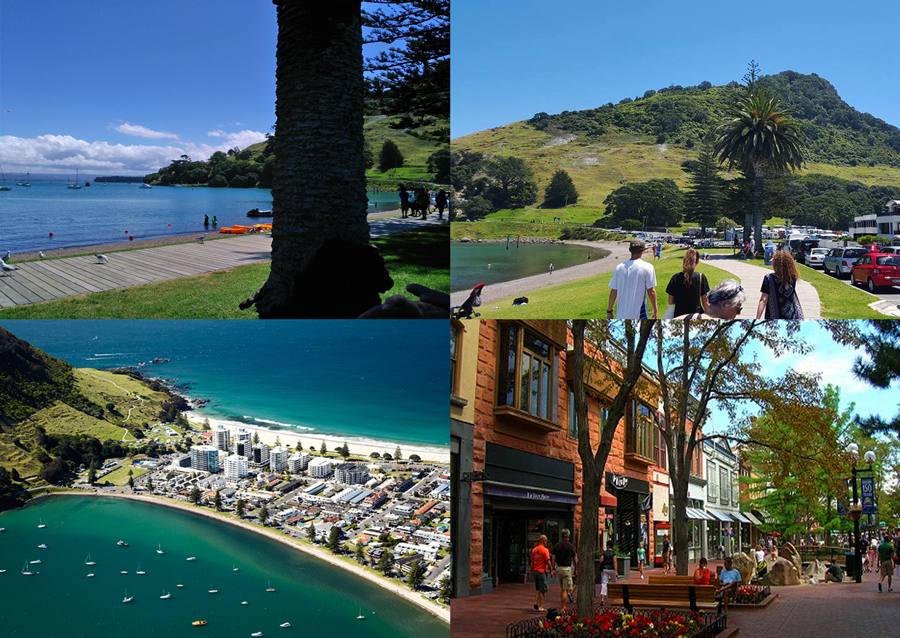 Some views of Tauranga.