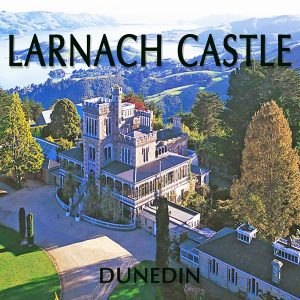 Much of the Ashes Tour is a retrace of Brian’s steps, ones he took pre me or after we were together. The Larnach Castle drop was one such do-over – we’d toured NZ’s South Island in 2004, a delayed honeymoon that turned into a cruisey drive to see the castle and Milford Sound and as much of the rest of the island as we could manage in eight days. Three years before, we’d married on the North Island and travelled with the kids but now we were ready for a break that was a bit more grown-up, with no ‘I Spy’ or fast foods, and where we got to pick the music.

Ken’s and my trip was similarly brief but we’d scaled down on distance, just driving from Christchurch to Dunedin with some minor detours along the way. Apart from scattering Brian at the castle I was keen to see a lot more of that southern city… I’m a little bit infatuated with all things Scottish and when I learned that its Gaelic name, Dùn Èideann, means ‘Edinburgh’ – where I’d had a fun few days six months before – it just jacked up its appeal even more.

I also was eager to catch up with Jo, an artist friend I’d met when we stayed at her Alexandra B&B last time. Brian and I had enjoyed Jo and Nelson’s easy hospitality and later we’d reconnected via social media, but I hadn’t seen her in 15 years. In the meantime we had lived through some coincidental changes – not least losing our beloved husbands – and we shared a passion for most things creative. Both of us were also in new relationships and this reunion was a bit of a show-and-tell… that turned out to be an all-round hit. Ken and Dennis certainly did not hate one another.

The four of us had a ball doing Dunedin and after three days of enthusiastic man chat, Ken farewelled his new buddy and we drove out along the Peninsular to Portobello’s 1908 Café. Brian and I had had dinner there the night we stayed at Larnach, and it was still a charming space. After lunch we poked around the Albatross Centre at Taiaroa Head (and saw not one albatross) then made our way up Peggy’s Hill to the castle. Its gardens and the views were just as spectacular as I remembered and while it might have felt weird to be staying in Room 26 again… it didn’t. That prime corner of the lodge had windows on two walls and from them we could see down to the harbour and across to Port Chalmers, north-east to the Dunedin Volcano and Harington Point, and (from the toilet) east to Cape Sanders. I’d booked our stay a few weeks ago and the reservations clerk, upon learning I’d stayed there in September ’04, checked their records and automatically booked us under the name Sharkey again. It wasn’t awkward and we both got a laugh out of it.

Finding somewhere for Brian wasn’t hard at all. As we wandered round the impressive grounds – nominated a ‘Garden of International Significance’ by the New Zealand Gardens Trust ­– I rediscovered The Curious Door that had fascinated me on my last visit. The little door in a tree in The South Seas Garden is just one of the Alice in Wonderland themed pieces installed on the premises, and while the surrounding foliage has grown a bit, it was accessible enough for me to deposit some ashes on the ledge above the frame.

We took a self-guided tour of the castle building – which is actually a gothic revival mansion that was built in 1871 as a private residence and was never used for fortification – and while its 43 rooms would have provided many grand hidey holes for Brian, the gardens appealed way more. The castle is opulently furnished and features intricately carved ceilings and timber work, but several areas are under renovation and it’s obvious that maintenance would be never-ending.

The 35-acre grounds have several vantage points for admiring the surrounding countryside and a charming little timber gazebo with a 180° of the harbour and its islands and inlets provided the most picturesque view of all. Off went Brian out over the railing on to the thick clumps of succulents that spill down the hillside towards undulating pasture land and the bay beyond. He couldn’t have asked for a prettier drop point.

Well that’s not true. It seemed that every corner we turned on that trip hit us with nature at her insanely beautiful best. We also left some Brian at the Moeraki Boulders south of Hampden but I’m sure that anywhere in the Eastern Otago or Canterbury regions would have tickled his imagination. 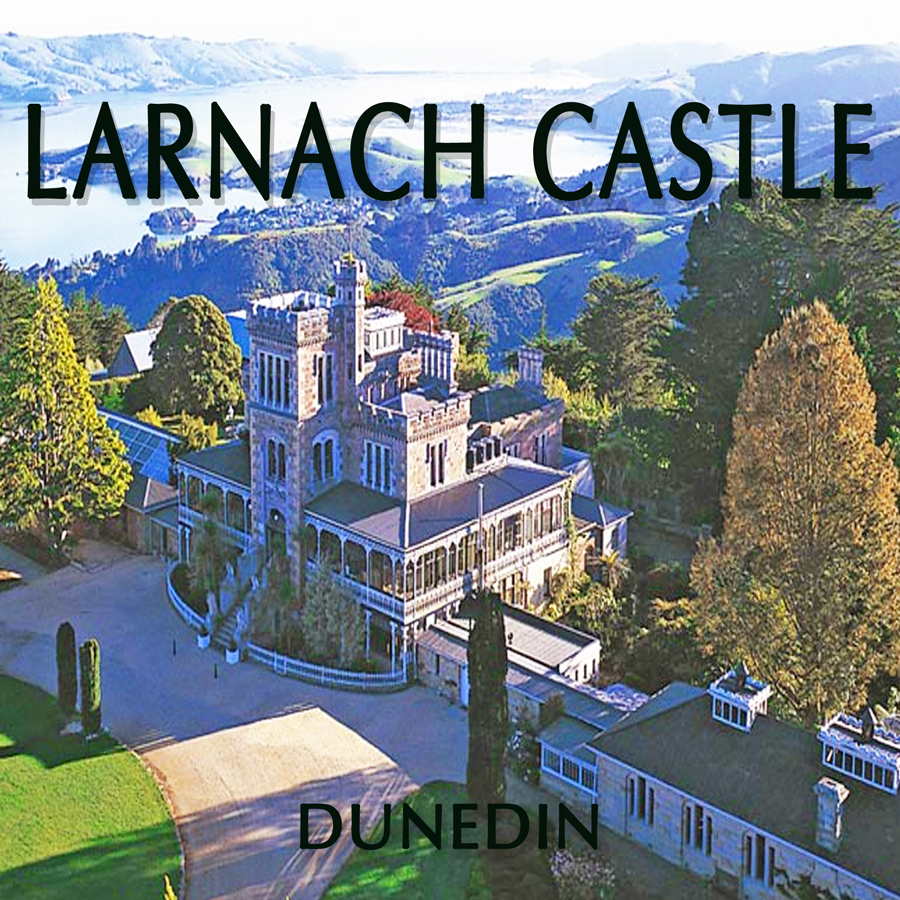 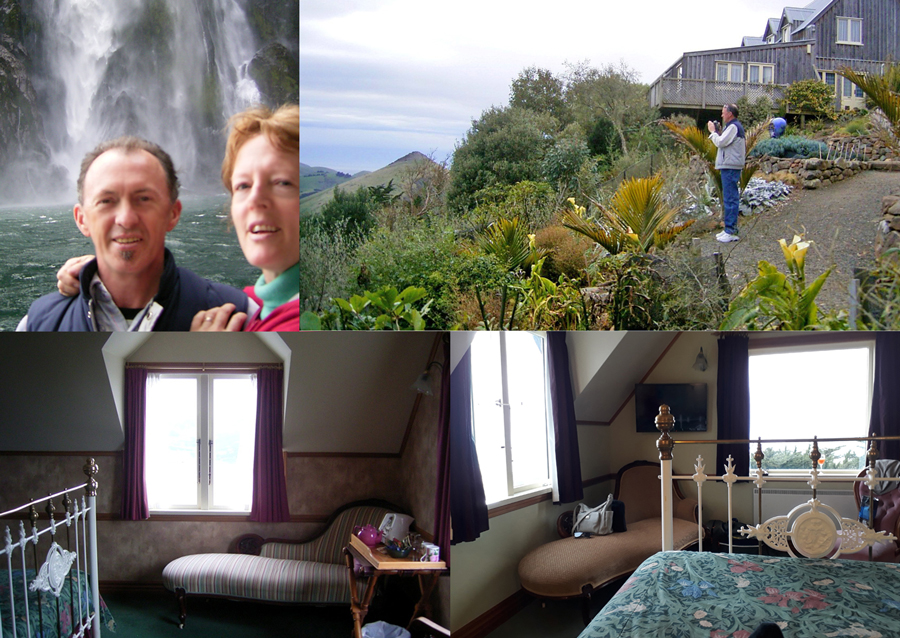 At Milford Sound on our 2004 trip, and Brian outside the Lodge accommodation (the famous Room 26 is top right behind him); the room had changed a little in 15 years… but the coverlet on the bed was the same. 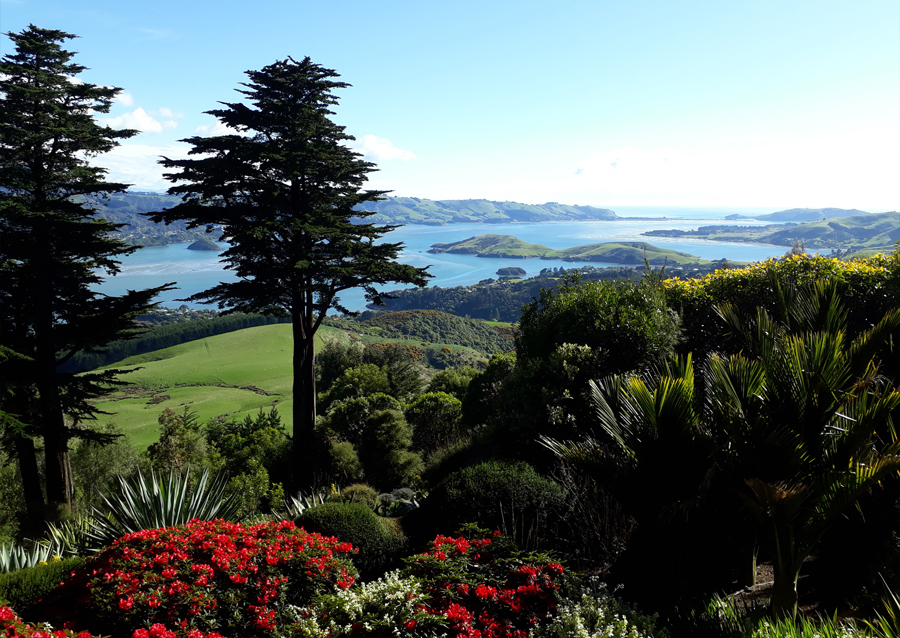 That perfect view from the gazebo lookout. 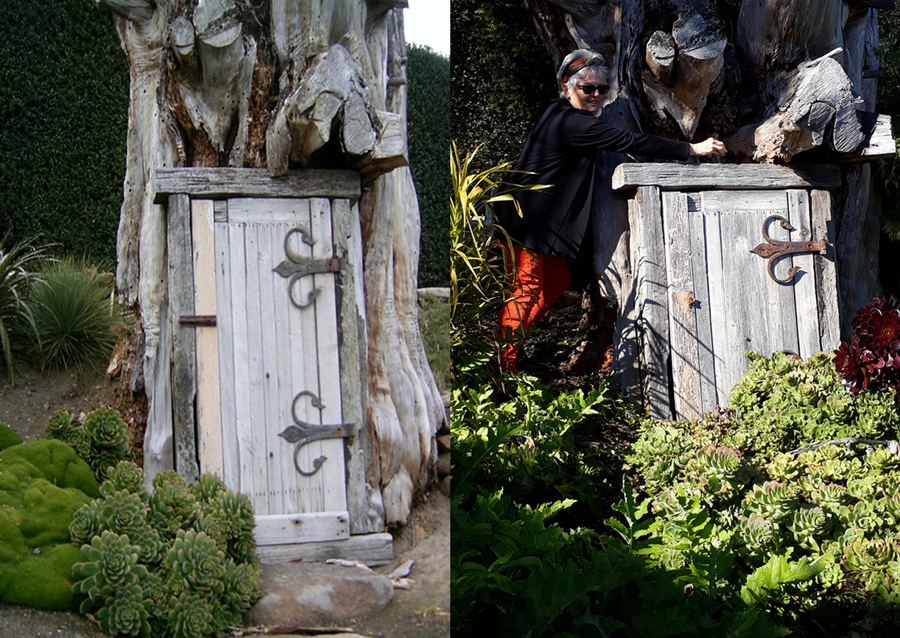 The Curious Door, inspired by Alice in Wonderland, in 2004 and again in 2019 when I left a bit of Brian. 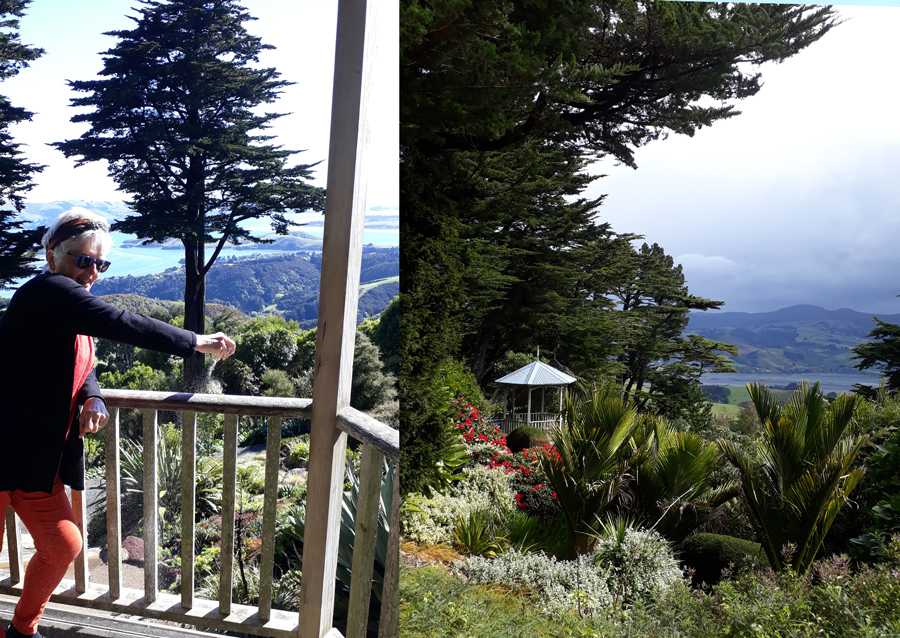 The gazebo where he made his second appearance. 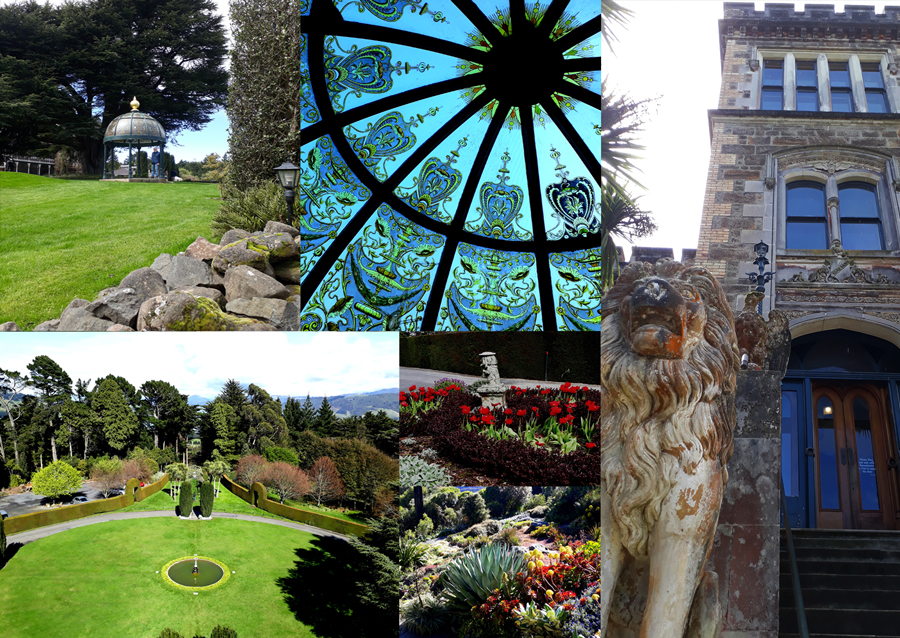 The well maintained grounds of Larnach Castle, including the rotunda with its stained glass ceiling. 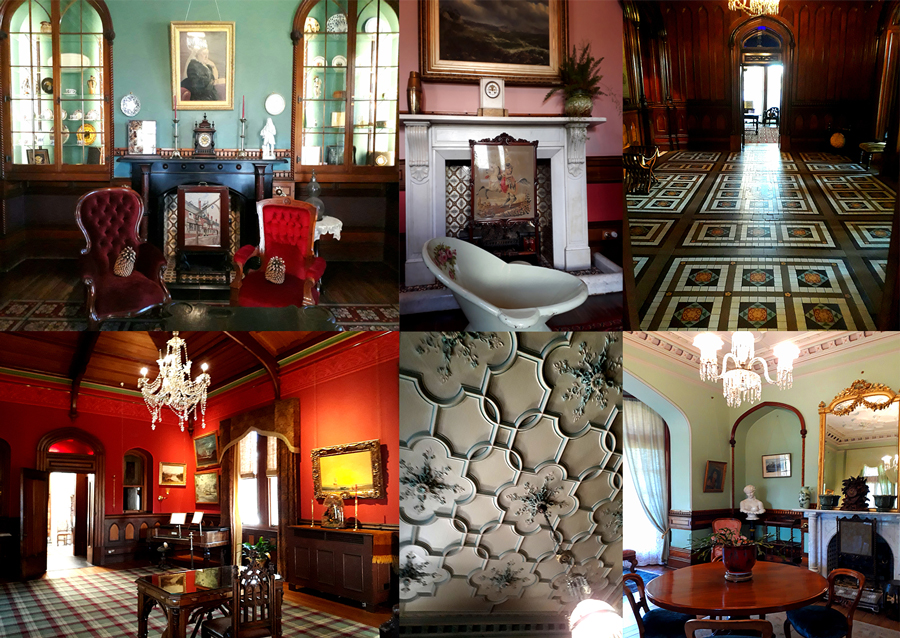 Inside the Castle, with the mosaicked floor of the ballroom and intricate ceiling work (pineapples on chairs was a very civilised way of discouraging visitors from sitting). 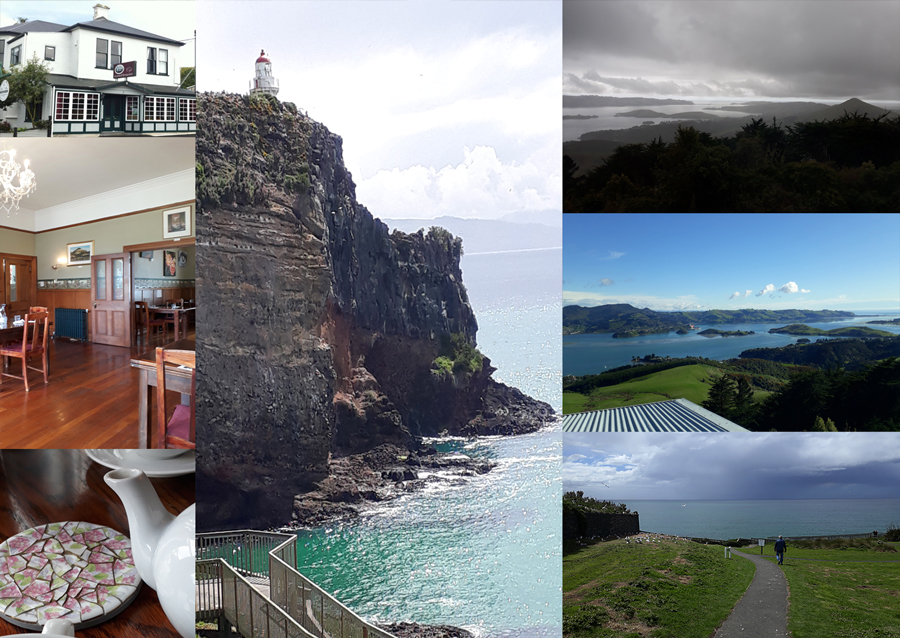 Portobello’s 1908 Café was built in 1901 and opened as the Wainui Tea Rooms seven years later. It has simultaneously been an infirmary for sick sailors, a mortuary, and a post office; my teacup was served on a coaster mosaicked with broken crockery from the 2011 Christchurch earthquake; Taiaroa Head’s lighthouse was impressive but rather than the resident albatross colony, yellow-eyed penguins and hooker sea lions, all we saw was seagulls – so many seagulls; two views from our lodge room; Ken picks his way through the minefield of their guano.

Dunedin’s distinctive former railway station, now a gallery and sports museum; Ken and Dennis in the city’s public gallery (with Jo and I they were never going to escape art but made the best of it); Ken and I under the Robbie Burns statue; Jo and the boys in the foyer outside the sports museum; the peaceful scene across the road from the Carey’s Bay Pub where we had lunch.