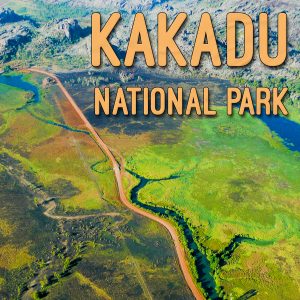 Tassie and the Northern Territory were the only Australian states Brian had never visited so naturally both were on his list. In late 2013 we considered Darwin for a holiday the following winter… neither the four-hour flight nor its climate at that time of year should be too hard on him, and my old school mate Sharon was keen for us to visit. By Easter though he was in his final months and too weak to travel anywhere, or care that he couldn’t.

A year later I was tootling down the Arnhem Highway with Shaz and two tablespoons of Brian in the bag. He had watched enough docos about Kakadu to want to see it all so even though this wasn’t his original K destination, I had no doubt he’d rubber stamp it as an extra resting place. It didn’t matter that I was unlikely to see a rabbit – it was Easter Sunday and Shaz’s granddaughters had given me a chocolate bunny… and nothing in the rules says the rabbit has to be real.

Our ‘glamping’ accommodation at Anbinik was everything we needed… but sooo hot. I wasn’t sure I could survive a night, ceiling fan or not, but Shaz assured me that when we returned that evening it would be cooler. I wasn’t acclimatising well to the NT but as we drove to the Jabiru air strip for our joy flight the weather changed so fast her prediction seemed a fair call. One minute it was fine and the next we had zero visibility as she wrestled the wheel through driving rain while I helpfully screamed “Oh shit! Oh shit!” and trees crashed on to the roadway we assumed was still underneath us. And then just as quickly it was clear again.

The suddenness of the storm gave me second thoughts about flying. The pilot was pretty laid-back though and when I asked about scattering Brian he pointed to the little air vent in the window and told me to watch out for a good spot. The vastness of the landscape was certainly imposing but I’ve got to say I wasn’t exactly blown away… it didn’t look much different to what I’d seen from the air over parts of NSW, and the scrub just seemed endless. I wasn’t disappointed, only… well where’s the stunning and unique I’ve heard so much about? Either my cynicism was terminal or everyone else was faking their oohs. Jim Jim Falls was kind of impressive – and got a bit more spectacular when the pilot compared its height to Sydney Tower (slight exaggeration, it turns out) – so I decided the escarpments there were as good a place as any.

Brian was less than cooperative that day and for every ash that made it out the vent, two blew back inside. I had emptied the bag and was picking off the stubborn bits when we flew over the floodplains and tidal flats… and no more ho-hum. The scene below was an intriguing mosaic of every shade of green and brown with serpentine estuaries patterning the land in bizarre shapes. That overworked adjective ‘awesome’ finally fit and I could at last see the splendour of this amazing country. Later, walking along the road back to Anbinik from Jabiru Lodge where we had dinner, the black silence and space were reminders of how easy it would be to get lost in the immenseness of Kakadu.

Our ‘tent’ was now cool and comfortable – and, we discovered, promoted as a romantic retreat. Management probably took one look at the ute-driving, short-haired and sensible-shoed middle aged women and drew conclusions. Good mates for 40-something years, we could live with that assumption.

Next day we explored a bit more of the Park and then crashed a tour group tramping around the Nourlangie area. The guide was not Aboriginal but his knowledge of indigenous art and tradition was extensive. After a fascinating translation of the Lightning Man rock art at the Anbangbang bush gallery he reiterated the need for cultural respect and why the National Park mantra of ‘take nothing but your memories – leave nothing but your footprints’ especially applies to sacred ground like Kakadu.

“You mean all of Kakadu?”

Uh oh. I confessed the ash drop (“I didn’t hear that,” he groaned) and pled ignorance and the pilot’s permission. It was too late for retrieval, but Brian would not appreciate being an unwelcome intruder.

No wonder he kicked up about going out that air vent. 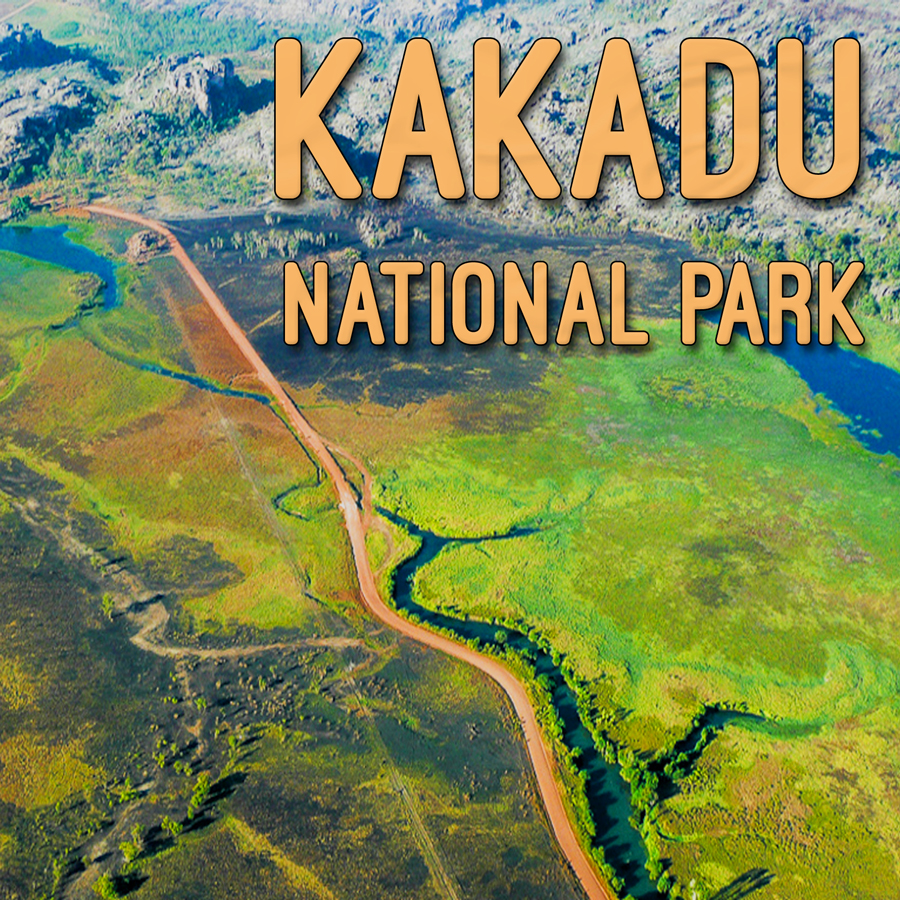 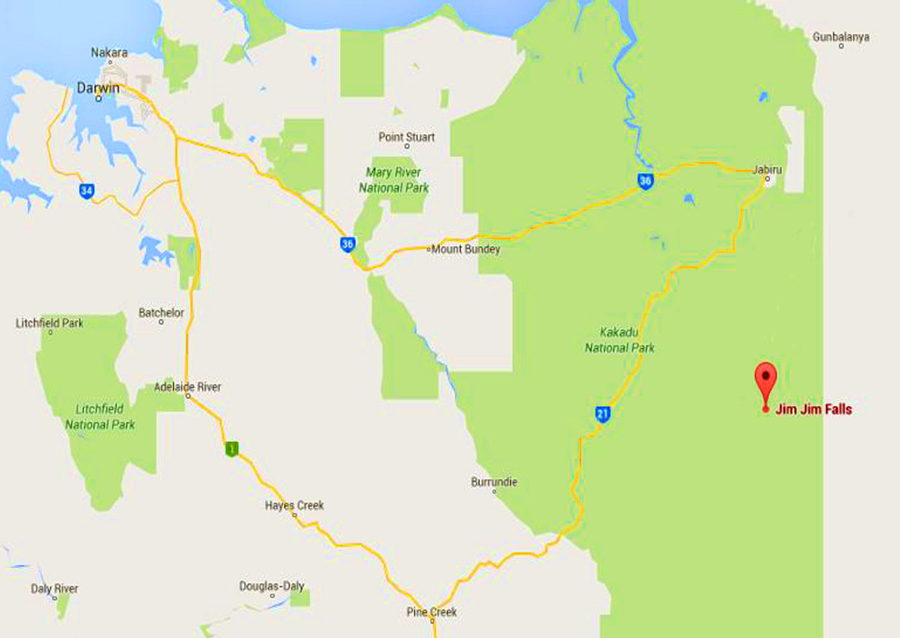 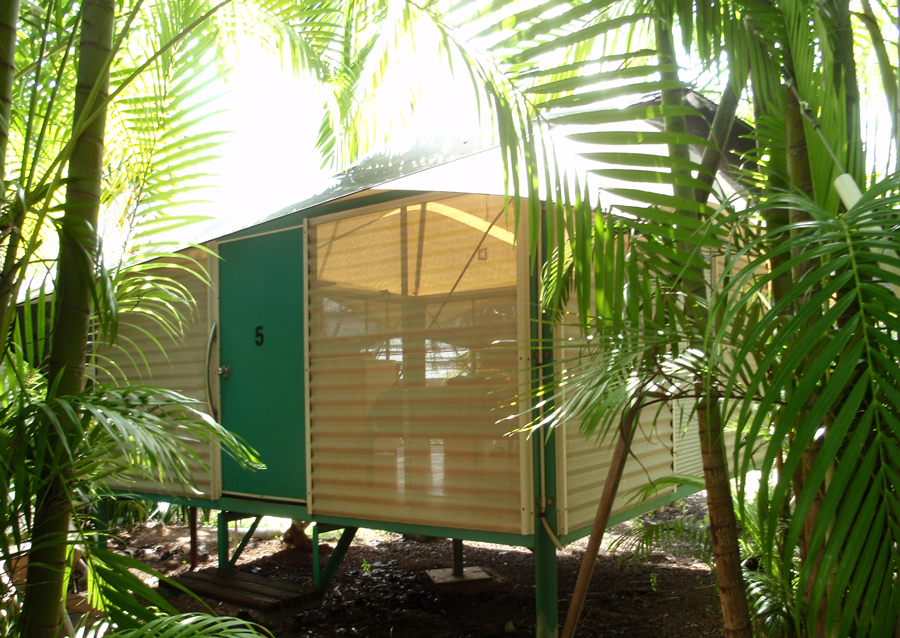 Glamping at Anbinik Resort includes a private ensuite bathroom and kitchen facilities for every two ‘tents’. 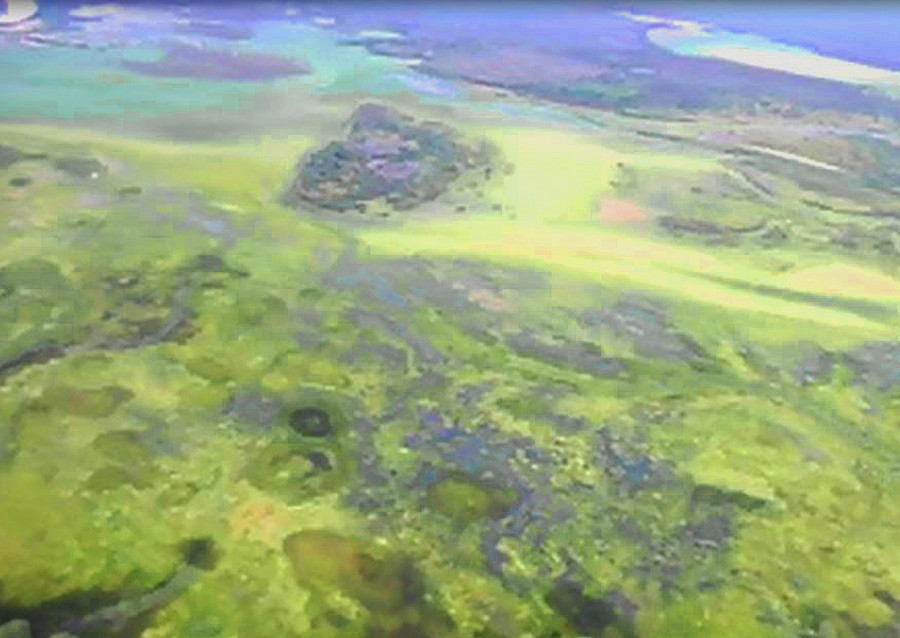 The amazing palette of the Magela Floodplains. 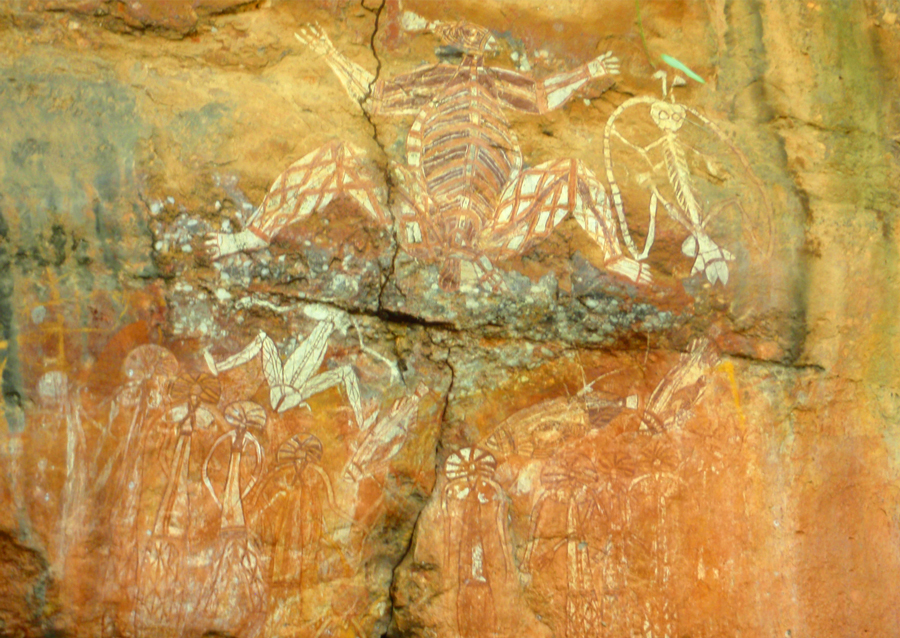 The Lightning Man (Namarrgon) and his wife (Barrginj), parents to Aljurr, the grasshoppers that appear as the first storms break. 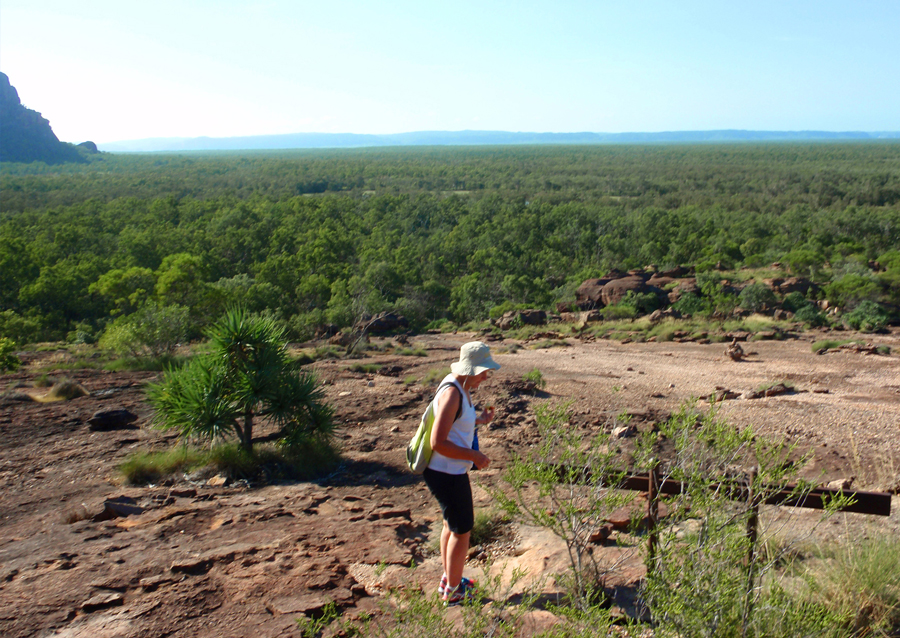 Sharon on our walk in the Nourlangie region of Kakadu. 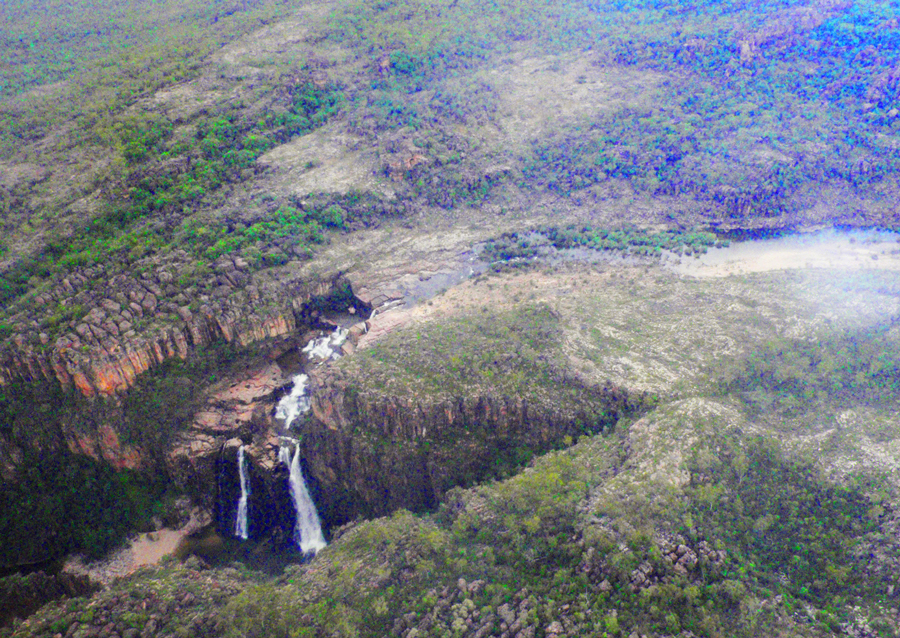 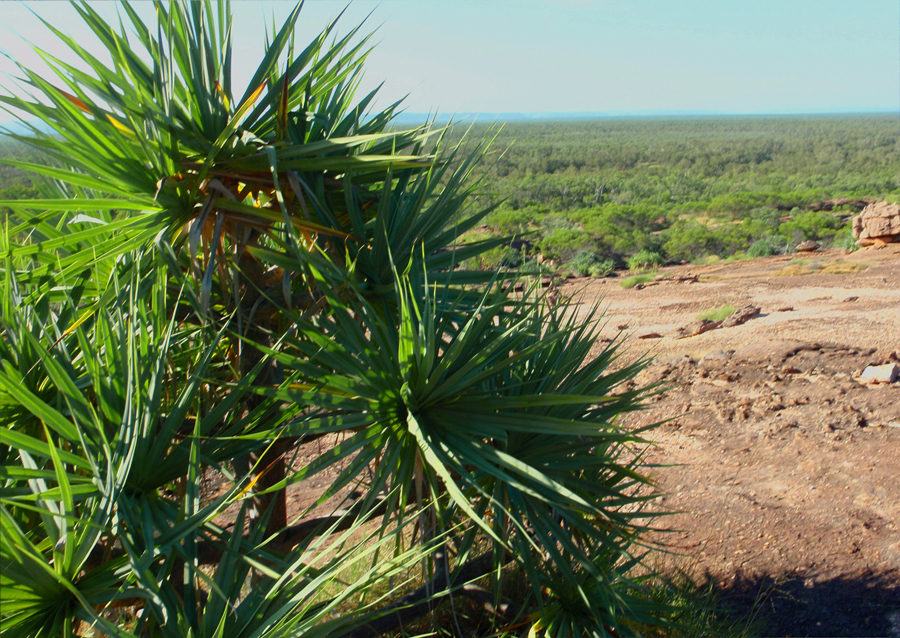 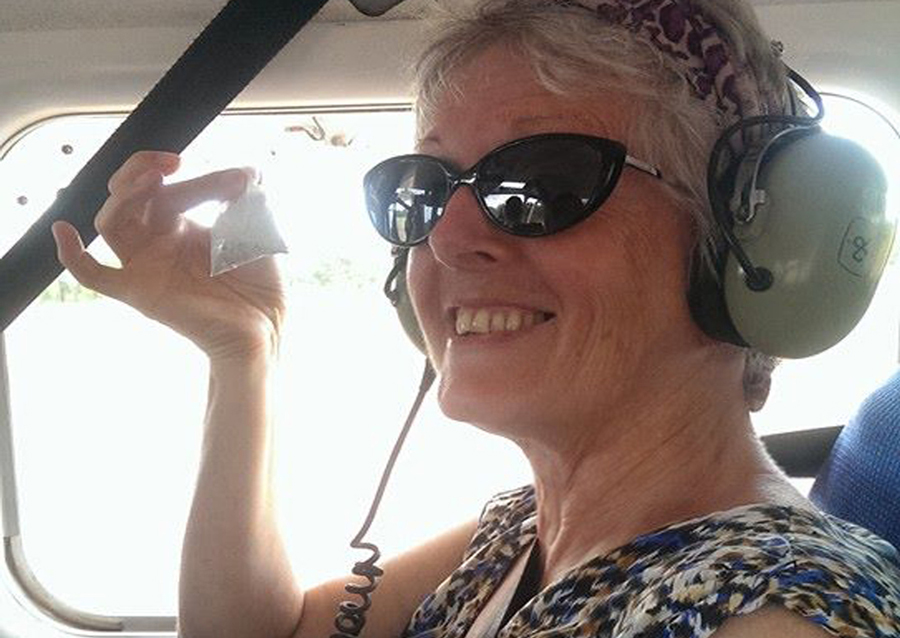 Getting ready for the drop. 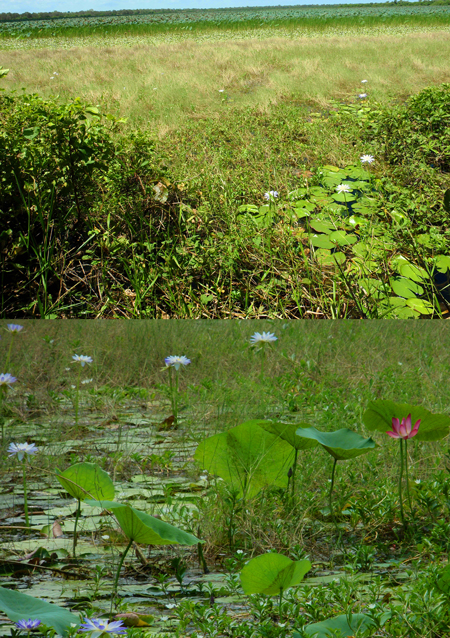 Water lilies and lotus flowers in the beautiful wetlands of Kakadu.