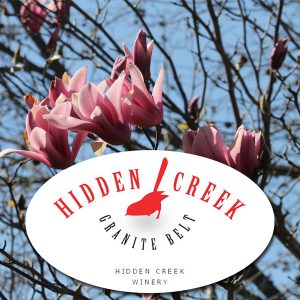 In the early days of our resurrected relationship money was tight but we always managed to find some el cheapo entertainment. Most involved kid-friendly activities but in winter 1999 when the boys were with their mum we booked ourselves a weekend in Stanthorpe. Vino at that stage was one of life’s greatest pleasures for Brian and a winery crawl would be a huge treat.

Granite Belt wines sometimes cop a sneer from serious buffs but for us that weekend was a pretty near perfect getaway, starting with Friday night’s dinner in a lovely old pub before an open fire and ending with Sunday lunch overlooking the lake at Hidden Creek Winery. In between we worked our way down the wine trail, hoovering up the free nibbles and sampling so much booze that I was soon talking in badly synched audio. By that last meal Brian was also feeling pretty dusty but we did a ‘hair of the dog’ with their Sparkling Shiraz, soaked up the winter sun and declared this the venue of choice if we ever got married.

Nine years later wine was one of the first casualties of his cancer treatment, the thing he missed most when his irradiated throat was unable to tolerate alcohol. He could sometimes manage a Guinness but it wasn’t the same; he had lovingly curated a collection of reds and ports and a favourite Pedro Ximénez sherry he was working his way through when he got the diagnosis, but he was never able to have those again. Our bar area gradually morphed into a mini pharmacy and alcohol was moved aside for increasingly stronger drugs. That bottle of sherry stayed put though – a defiant link to enjoying a drop with friends.

Mick and Jenny were two of those good mates, with us right through the journey. Mick and Brian would earnestly dissect various wines… like the barbeques he insisted on cooking but couldn’t eat, Brian never lost interest in the wine he couldn’t drink. Stanthorpe was a definite for an ash destination and the Cleavers were natural road-trip companions. We drove up on a Friday after they finished work and on the way we stopped in at Tenterfield School of Arts where Henry Parkes, ‘The Father of Federation’, made his famous Oration in 1889 that led to the formation of the Commonwealth of Australia.  You could smell the history in that room and even my cramped brainspace managed to osmose a few new bits of knowledge.

Kev was supposed to join us for the weekend but his sore back got in the way of that plan. Dan was also driving over from Brisbane and while we waited for him to arrive, Jen and I trawled the main street looking for the pub where Brian and I had enjoyed our Friday dinner all those years ago. A couple of them were maybes, but definitely not the Central Hotel, where we parked for a drink and the trivia comp. We were too late to join in and listened instead as the regulars romped through highly scientific questions that stumped us. Appearances can be deceiving and their “Quit lookin’ at me fuckin’ answers” banter apparently masked razor sharp intellects.

O’Mara’s pub: that was the place. Dinner there that night might not have been the same romantic prelude to a dirty weekend that I’d enjoyed 16 years before, but the food and company were good. From there we hit the Stanny RSL where Mick and Dan headed for the pokies while Jen and I, fuelled by alcohol and the urge to bop, got closer to the dance floor… but weren’t quick enough. Suddenly it was taken over by some serious line-dancers whose precise moves would not accommodate beginners. We were built for rocking The Angels but would have had to be way drunker or more coordinated to attempt boot scootin’ to Brooks and Dunn.

Saturday was a movable feast of wines, artisan preserves, dessertery (I’m sure The Bramble Patch made up that word) and some ring-burning pickles we savoured like gourmands. Heavy rain had closed the steep driveway to Castle Glen so I couldn’t revisit the Musk Stick Brandy and Dark Choc Jaffa liqueurs – as migraine-in-a-bottle as they sound – I’d been telling the others about. At Hidden Creek we bought more red and found the ideal spot to “get rid of some Brian” (Jen’s charming turn of phrase) taking turns to scatter him into the lake. New management had made changes and the outdoor dining area was now enclosed, but the view and the Shiraz were just the same. My memories remained happily intact.

As for the bunny sighting, next to our Apple and Grape Motel was a giant stuffed rabbit, sitting in an op shop window. Even I thought that was a lazy choice but then on the way home we drove past a property sign that read ‘Rabbit Flat’, so that got the nod instead. 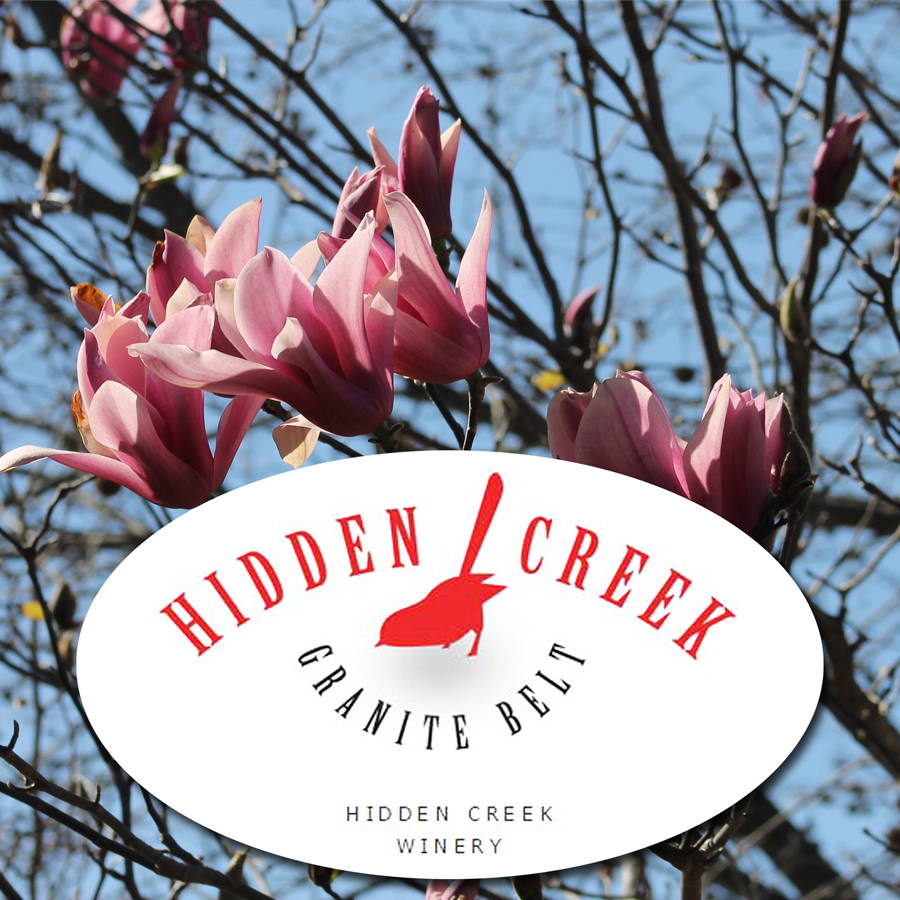 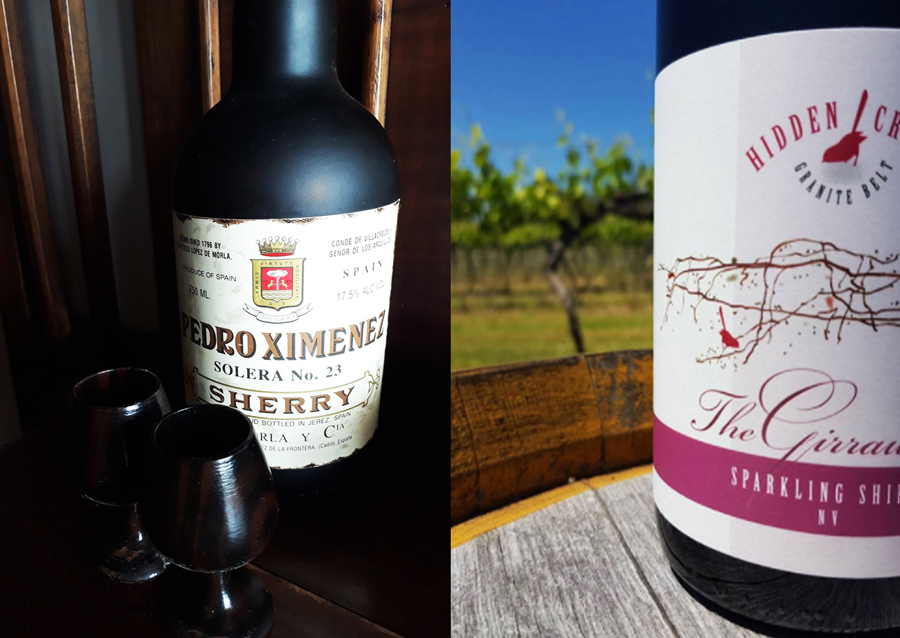 Pre-cancer Brian considered his Pedro Ximénez Solera 23 worth the $ but for me Shiraz or Ouzo will always be the best route to a decent hangover. 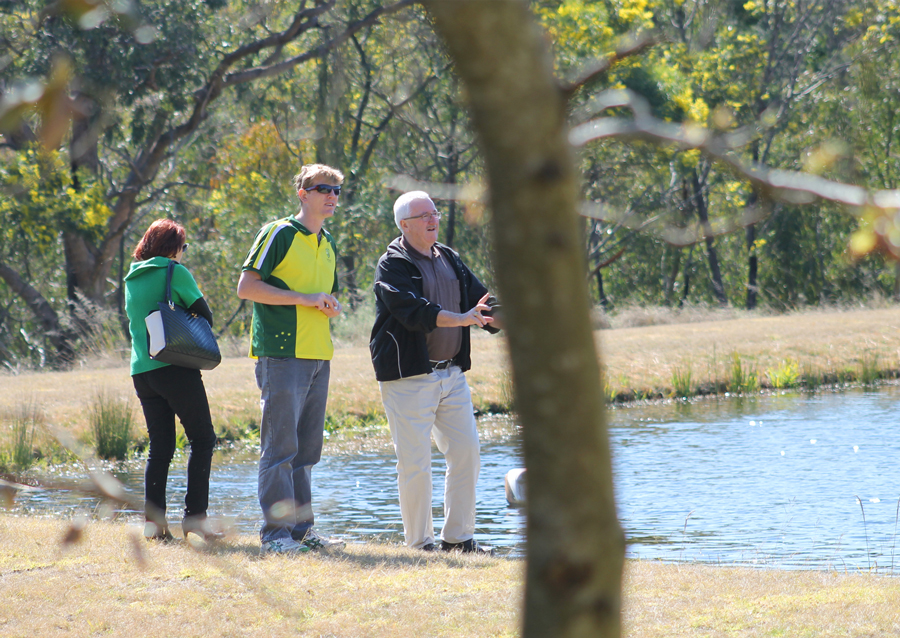 Jenny, Dan and Mick check out the lake for a suitable spot. 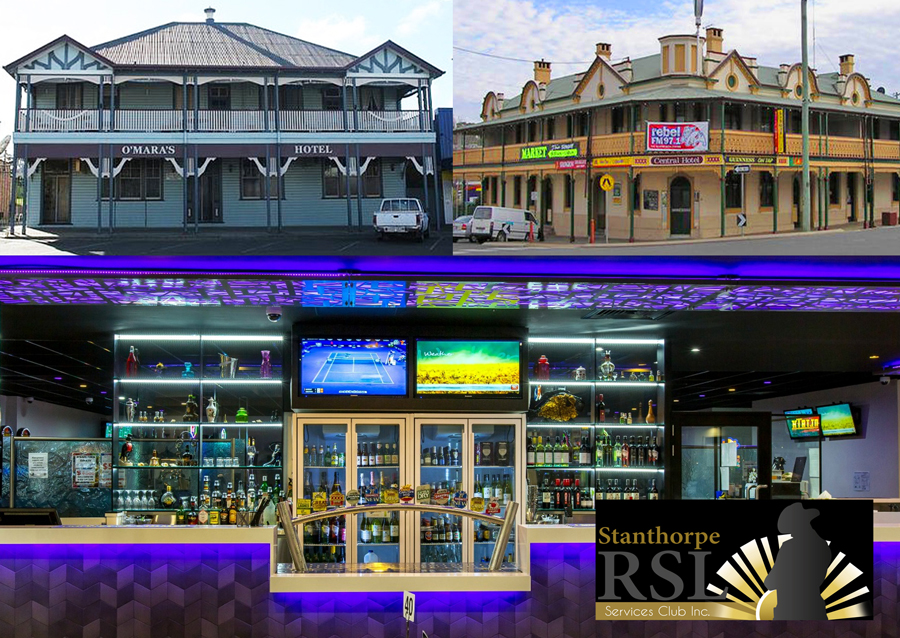 O’Mara’s, The Central and the Stanny RSL. 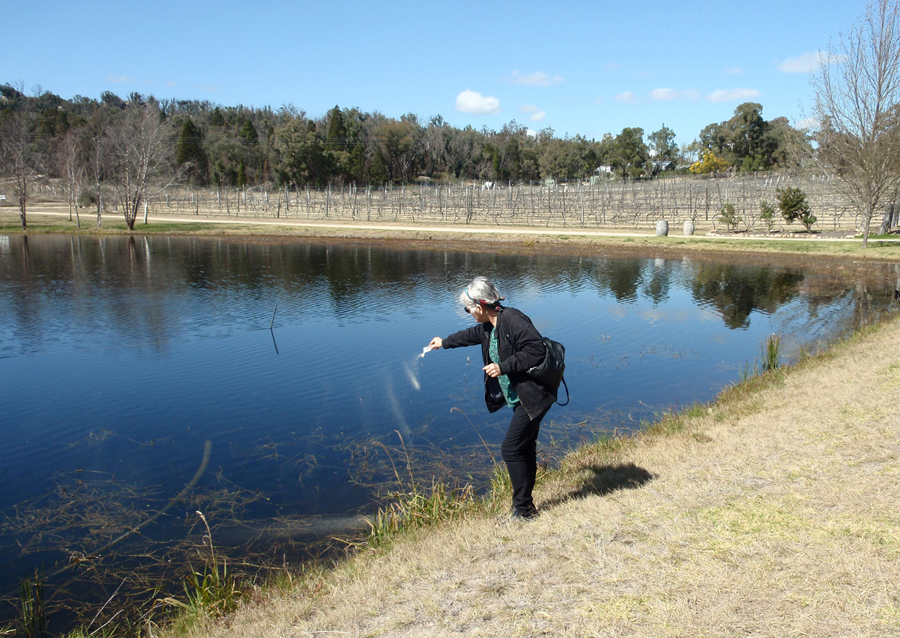 The first bit of Brian to go into the lake. 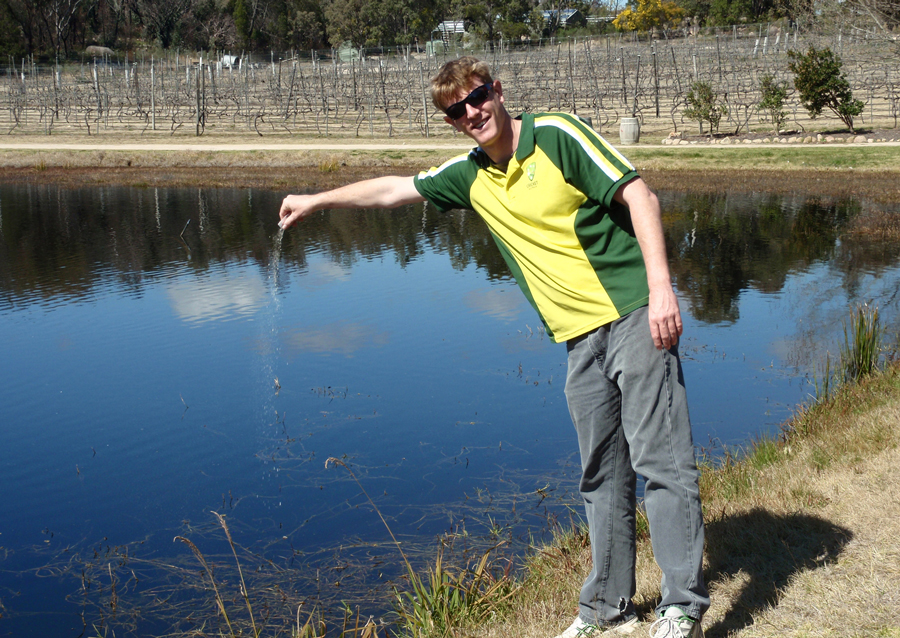 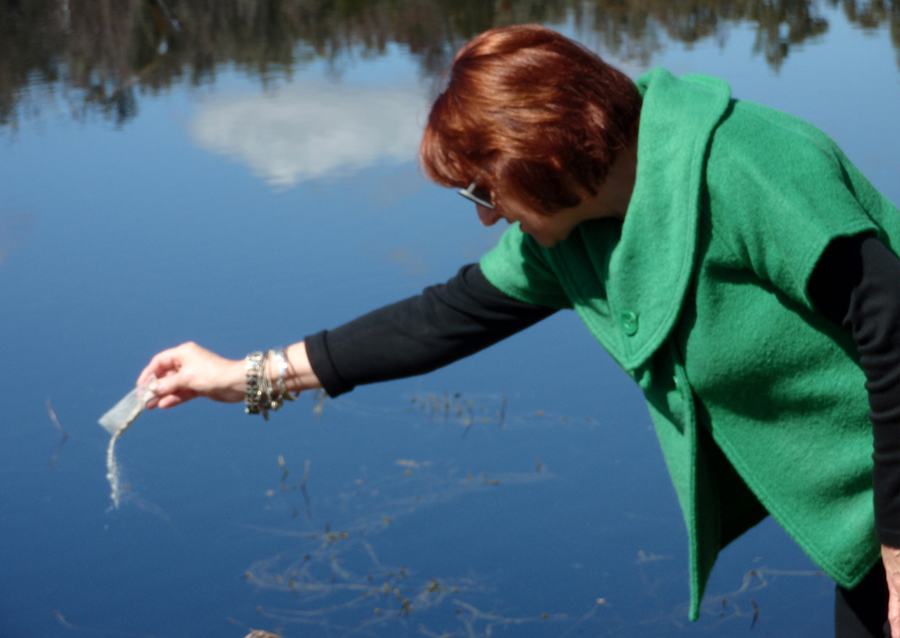 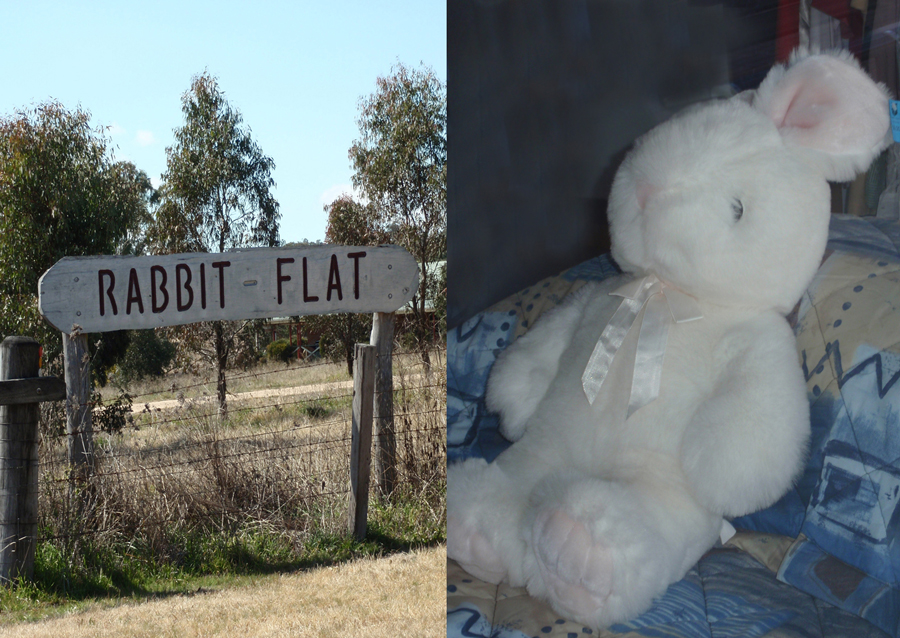 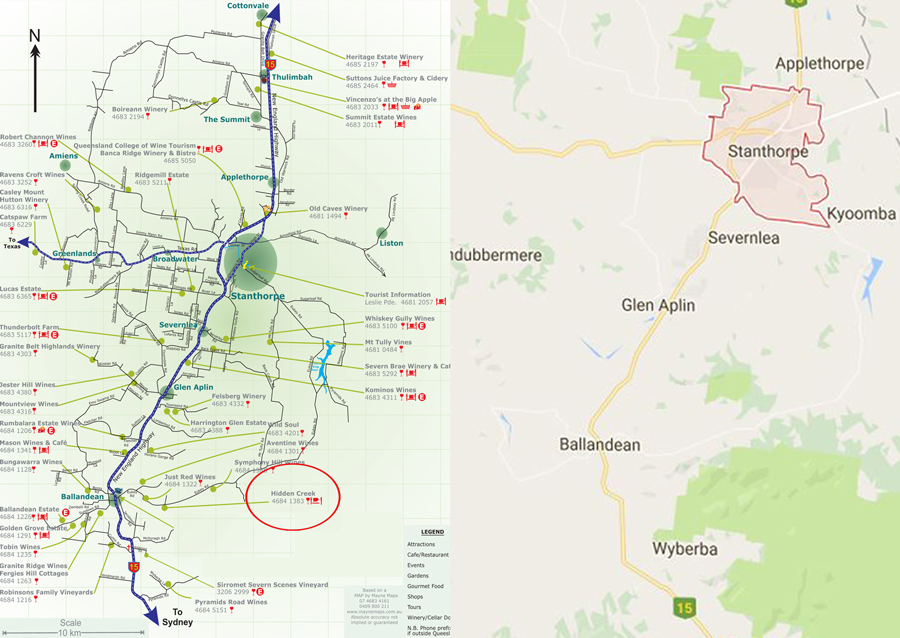