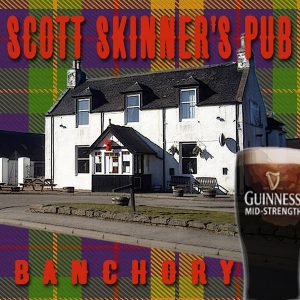 Scots… even if you took Billy Connolly out of the equation, they‘d still have to be the jolliest species on earth. In 2009 we copped a good taste of their humour and hospitality when Sam’s rep squad played the Banchory Boys FC, and the club turned on a traditional hearty supper for the visiting players (and FIFO hangers-on like us) at their local. It was an evening we all rated as one of the highlights of the trip.

We’d rugged up against the brisk October morning on the sidelines at Milton Park, chatting with the home side’s friendly but fervent supporters as our boys were bagpiped on to the field. The turf was lush, nothing like the firmer surface they were used to at home and they were politely requested to cut short their shuffling warm-up to minimise damage to “our fitba green”. We lost the game but found a whole new way of talking and this very authentic day ended with us tucking into chunky homemade soup and baps in Scott Skinner’s cosy loft, while a rowdy mix of Doric and Aussie voices bantered away in the background.

Formerly known as New Banchory Farm, Scott Skinners was converted to a bar and restaurant several years earlier and renamed for a famous 19th century fiddler turned dance master. Skinner had been fiddling and flinging since he was six and so impressed Queen Victoria with his enthusiasm that her servant John Brown advised him to make the most of the opportunity (“Ye’re in the richt quarter noo, so shak’ yer fit, man! Shak yer fit!”). Shak them he did and he was still performing into his 80s, though he came to view dancing as a waste of time and mainly stuck to the fiddle and composing many traditional Scottish tunes.

That night under the pitched and raftered roof we experienced the pub at its best but when I returned 10 years later to leave a bit of Brian, it all felt so ordinary. Daylight didn’t help, the upstairs was closed, and as I mooched around the main bar looking for a spot, curious eyes were upon me. I smiled sheepishly at the morning tipplers and said I was just waiting out of the cold for my ride, but it wasn’t much warmer in there and eventually I sidled next door to the friendlier air of the Edinburgh Woolen Mill, scattering our boy in the gravel on the way. Some decent bargains later I could forgive myself for not doing better than a crummy carpark drop.

The ride I was waiting for was Maggie Patience, a talented powerhouse whose ‘Pretty Rubbish’ creations I came to know via Facebook. As well as recycling found objects into her quirky art, Maggie had been collecting mosaic flowers and “wee birdies” from artists all over the world for a charity fundraising project, and I wanted to deliver mine in person. Getting out to rural Aboyne would be a bit of a trial however and as I was to catch up with the travelling buddies to take the train down to Edinburgh that afternoon, my window was small. Maggie generously offered to pick me up from Scott Skinner’s after I’d cabbed there from Aberdeen and dispersed some Brian, and take me out to see her renowned garden and studio.

With her Andy and the terriers and a lovely lunch – and enough works-in-progress that I felt better about my own Land of the Unfinished Project ­– it was a magical space to visit. I added my wattle mosaic to her Art in the Heart tree and learned more about the Gathimba Edwards Foundation in Kenya that its proceeds benefit. Like a kid let loose I poked around among the colourful stacks of intriguing tesserae, all waiting to be reimagined into something special. A forwarded parcel was waiting for me from Fehmi Gökeş, another mosaics must-meet who had taken me for a private three-day workshop in Norwich the previous month. Fehmi also produces some stunning pieces but his style is very different to Maggie’s, and I was lucky to experience such diverse techniques first hand. I felt so inspired by them both… and truly connected to my creative clan.

Brian had often commented how glad he was that I had my mosaics and wanted me to sustain that passion after he was gone “to make it easier to deal with stuff.” He loved watching me create and after he became more dependent I moved my operations from under the house to the deck – and then in winter, to the tight little back room that had become his realm. Mosaics is not exactly a silent pastime but he insisted the monotonous nipping sounds ­(if not the lethal pinging projectiles my nipping fired off) were comforting and didn’t bother his snoozing. It also made him feel that sitting with him for hours didn’t impact my freedom too much and, ever supportive, he admired and advised and insisted I buy whatever I needed to make my visions happen. I didn’t seek his approval to do what I loved doing anyway, but och aye, I did appreciate his encouragement. 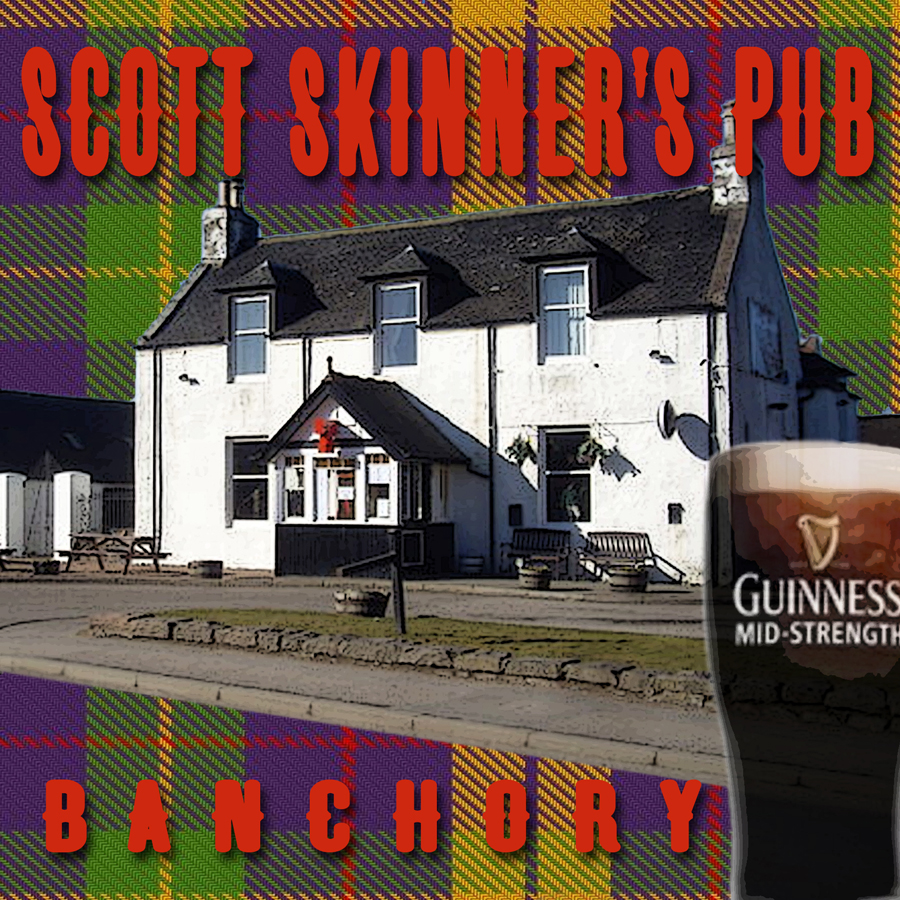 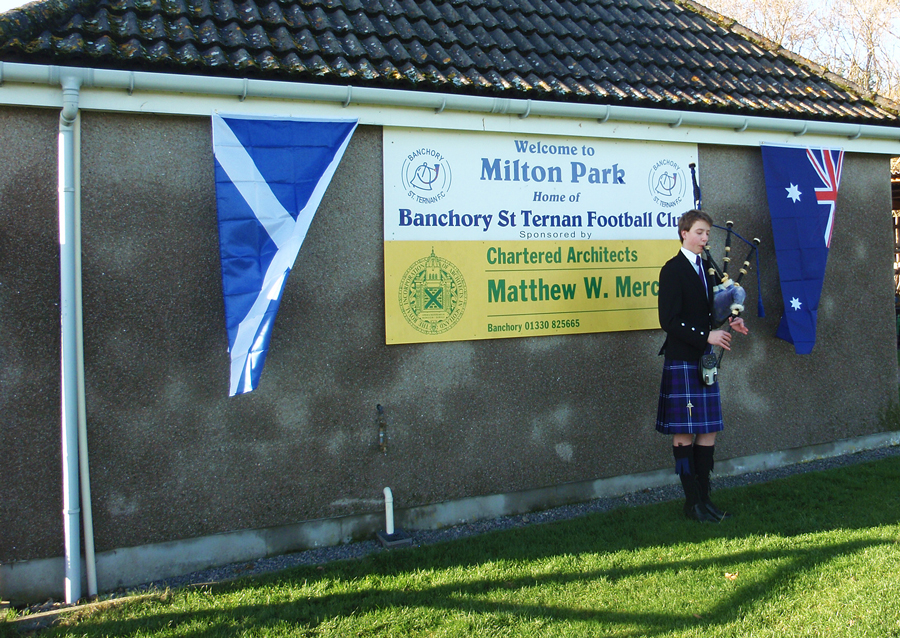 The players were treated to a traditional welcome and piped on to the field. 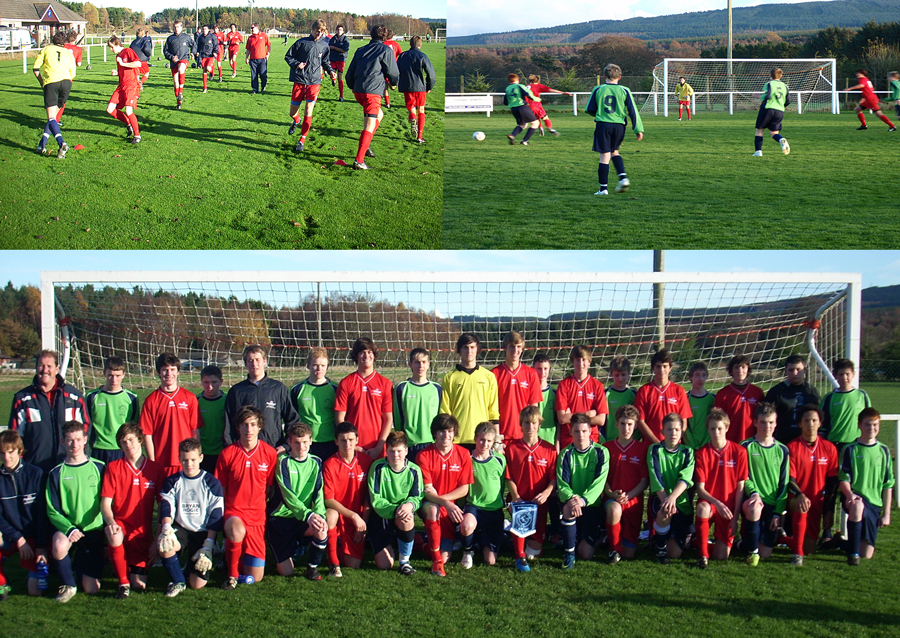 The boys were not accustomed to the luxurious turf and made a bit of a pudding of it during their warm-up. Sam (and his very unfortunate haircut) is front row left. 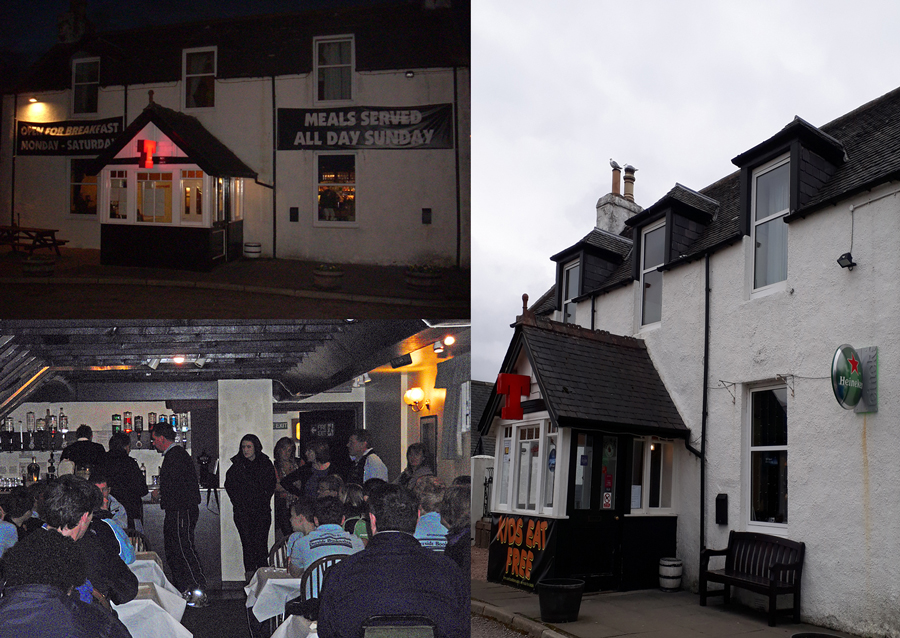 Scott Skinner’s pub the night of our dinner there (left), and in a less flattering light when I went back to leave a bit of Brian. He’s in the gravel driveway on the left of the entrance way. 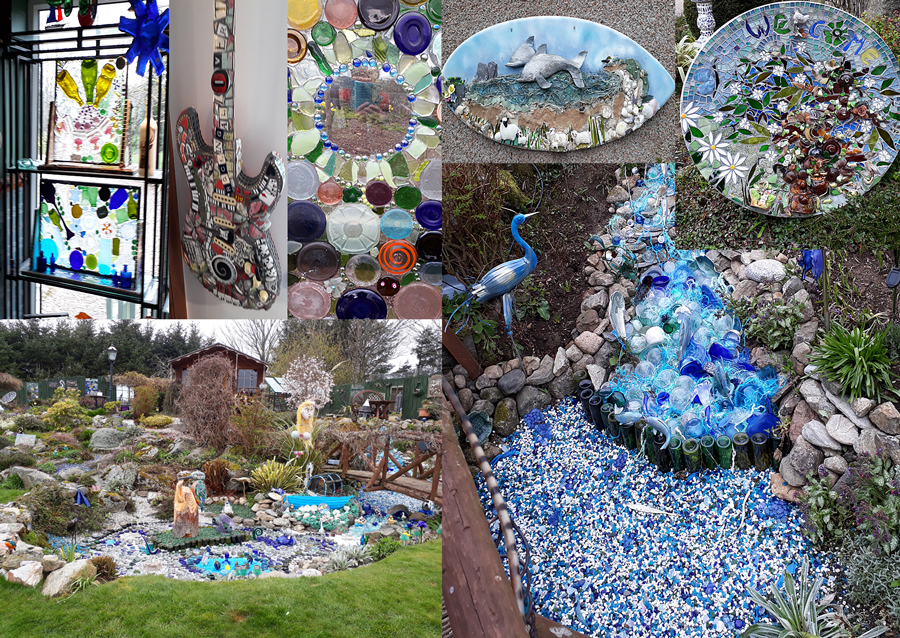 The home, garden and Pretty Rubbish Mosaics workshop of Maggie Patience is a delightful fantasy of art and her quirky creations. 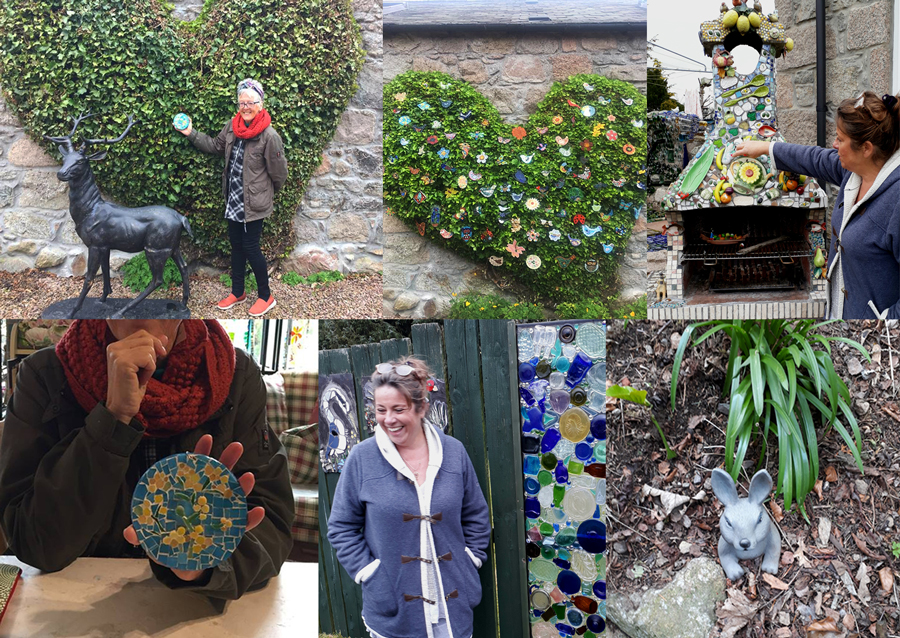 The Art in the Heart tree in the courtyard of Maggie’s home eventually held over 100 little mosaic pieces, destined for exhibition and sale to raise money for her charity of choice, The Gathimba Edwards Foundation in Kenya. I was more than chuffed to visit Aboyne and meet Maggie, and add my golden wattle mosaic to the tree (my piece has since been bought by someone in the Virgin Islands). I didn’t have to look too hard in her wonderful garden to find a little rabbit for my bunny sighting. 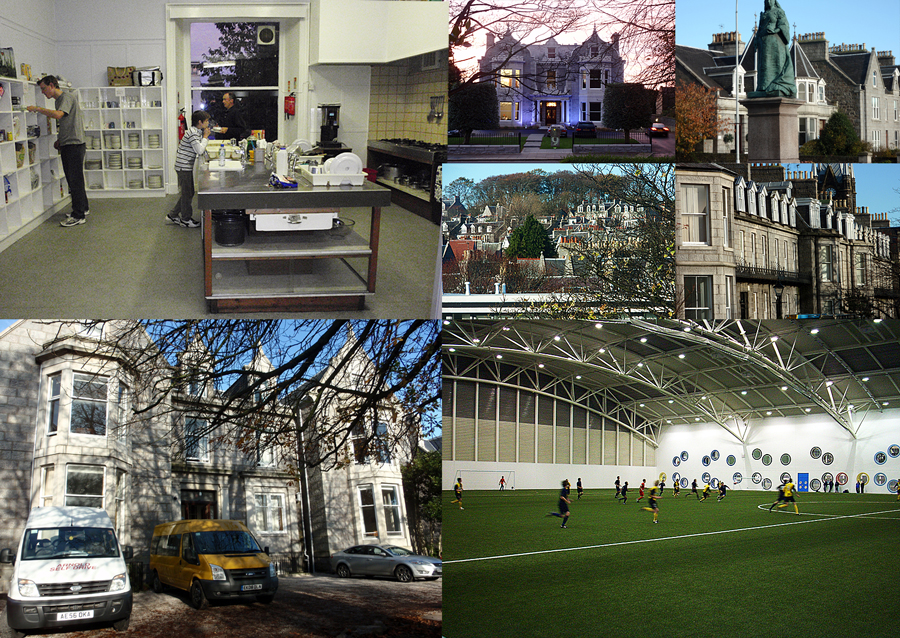 In Aberdeen we stayed in one of the best hostels ever during our first visit to the “Silver City by the Golden Sands” - and stayed there again when I returned with my Hadrian's buddies. The city was still loads of fun but industrially and economically it has gone a little down hill. Dan, Ben and Brian in the communal kitchen at the hostel (left) and some scenes from around the town; their game in the stadium of the Youth Football Academy.