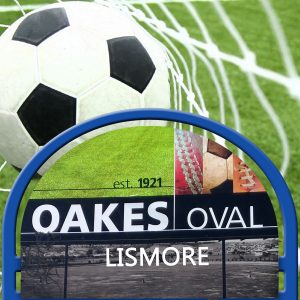 Of course football (soccer) was the focus of the first place Brian nominated for sprinkling his ashes. Passionate about the sport – and especially our club, Lismore Workers FC – his obsession with his ‘other woman’ only got in the way sometimes and I came to love the old tart too. We made life-long friends in our Workies family.

He thought it might creep out the boys to be training and playing over the top of him though so vetoed our home ground of Richards Oval as a resting place. We considered a few other relevant destinations but settled on Oakes, the city’s main sporting field and scene of some of Brian’s proudest football memories.

He’d played rugby league in his youth but wanted the less injury-prone code for his own sons. Their ruptured ligaments and torn hamstrings might have contradicted this perception but he loved watching Sam and Ben progress through the junior and senior teams. Always an active soccer dad in support roles of manager, coach and committee positions (including three years as president and a stint on the board of Football Far North Coast), he was rewarded with the respect of the local football community, awards acknowledging his contribution, lots of practical and emotional support through his illness, and some beautiful tributes before and after he died. lismoreworkersfc.org.au/rip-brian-sharkey

Managing was a natural fit for he who considered himself methodical – and when it came to reading the fine print or navigating policy, he was. With paperwork though it was all an illusion… under piles of team sheets, rule books and gear brochures and those infernal half-finished notes to self was our bedroom, but his “Leave it – I need that” frustrated any attempt to bulldoze the debris. I raised the white flag sometime during his presidency and totally accepted defeat by the time he took on managing the Premier squad.

For the Prems, 2012 was their year with victories in the Anzac Cup, the Corey New Cup and, for the first time in many years, the Premiership Grand Final. Though Brian shared in the celebrations – the image of his teary joy after the Anzac Cup win is on the Brian Sharkey Memorial trophy – his exhaustion was showing. He had already outlived his terminal diagnosis by several months and would survive for almost two years more, but he was often too sick to be active as a ground official or to assist the team. With Sam playing Prems and Ben Reserves he still wanted to contribute so would film the match from the sidelines, then when it got too cold, from the club house, until even attending the games was beyond him. He hated every such abdication but was chuffed that friends, understanding his need to stay connected, were kind enough to text through score updates or visit with coffee and a post mortem of the game.

Football featured till the end of his life and beyond, and two days before he died he smiled peacefully to see his boys going off in their respective club uniforms. Sam had returned from living on the Gold Coast but was still playing for Palm Beach FC, while Ben was now in Workers Prems. Later that year when the annual post-season friendly was played between current senior players (the Redmen) and former players (the Ex-Men) it was renamed the Brian Sharkey Memorial game and each of the boys captained a side in honour of their dad. The day has also become an annual fundraiser for research into various types of cancer.

It is rare these days to get the five boys together – or even four of them – but on what would have been our 13th wedding anniversary a visit by Dan and Aaron meant an opportunity for scheduling that first drop. Enthusiasm wasn’t obvious as they shuffled near the gate, not keen to be recognised, and when a local cricket team warm-up ran past me one of the boys groaned “I know that guy…”.

To a soundtrack of suburban Friday afternoon traffic I shook out the little ziplock bag. They all declined to share the chore, Dan took a few photos on his phone, someone joked that the wild rabbits looking on must be a sign Brian was still lurking (lean and fast, his nickname when he played wing for Ermington-Rydalmere was ‘Rabbit’), and we climbed back in the car and headed home, the boys finding solidarity in mocking my driving.

Nothing had changed, but everything had. 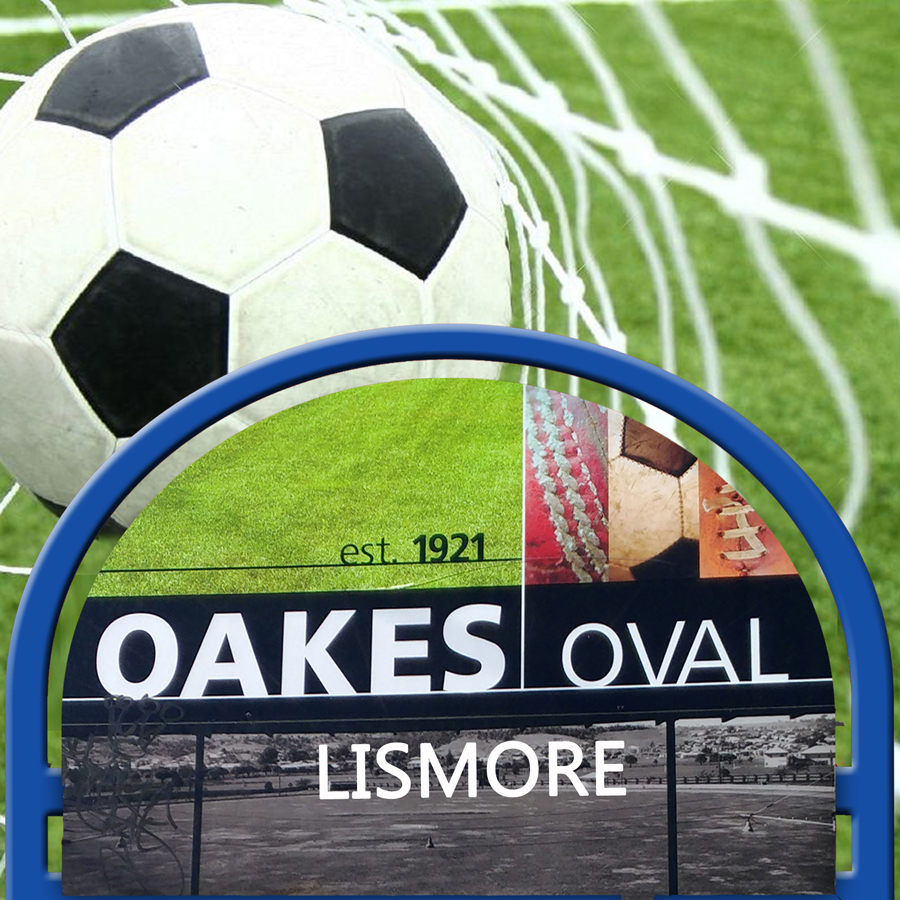 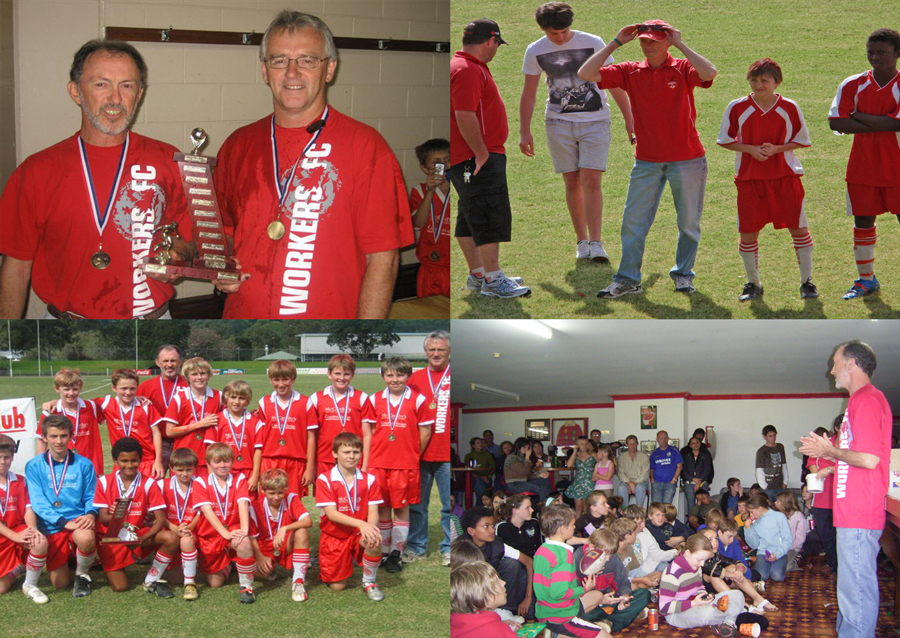 (top left) With coach Kevin Keevers and (bottom left) the U12s grand final winners, 2006; (bottom left) With coach Jason Lines, Ben, Johnno Stewart and Brian Caulker at the 2010 U15s Grand Final between Workers FC and Richmond Rovers. The score was 3–3 at full time and 4–4 after extra time, before Rovers won in penalty shootout; (bottom right) At the Junior Presentation in his role as Club President, 2006. 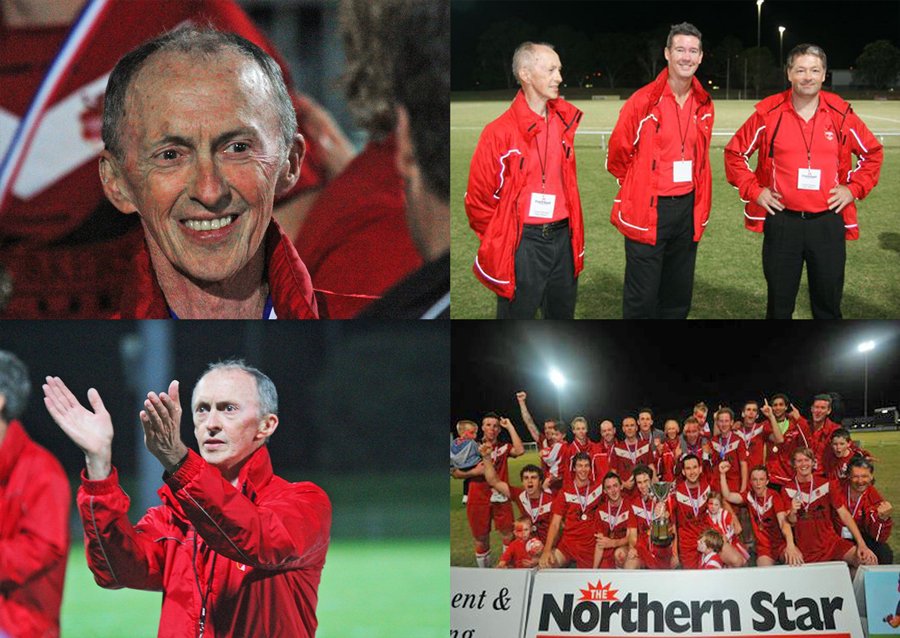 (top and bottom right) His face says it all after the 2012 Anzac Cup win against Byron Bay; (top right) With Jonathan Harlan and Coach Scott Collis; (bottom right) After the 2012 Premier Squad Grand Final, where we defeated Richmond Rovers 3–2. 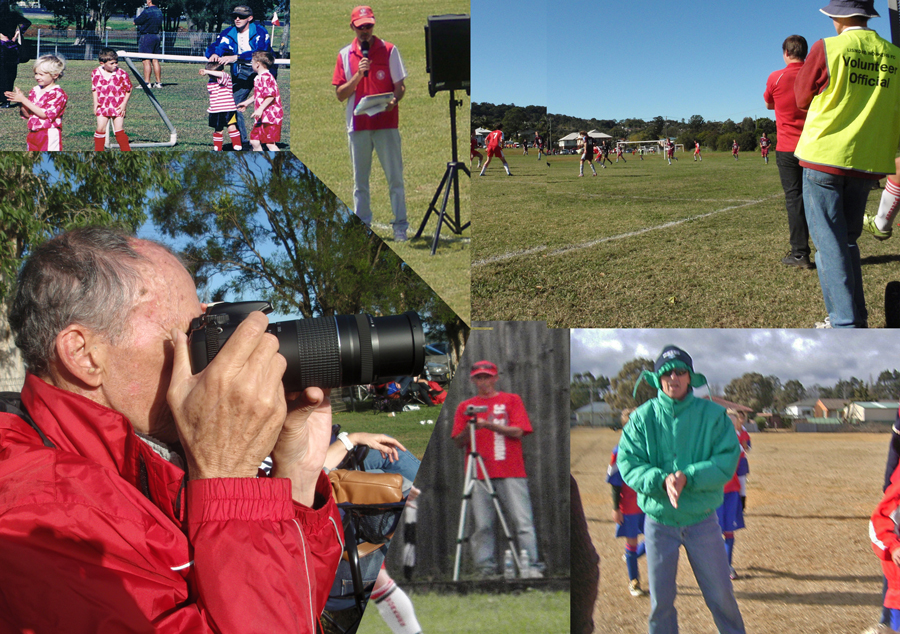 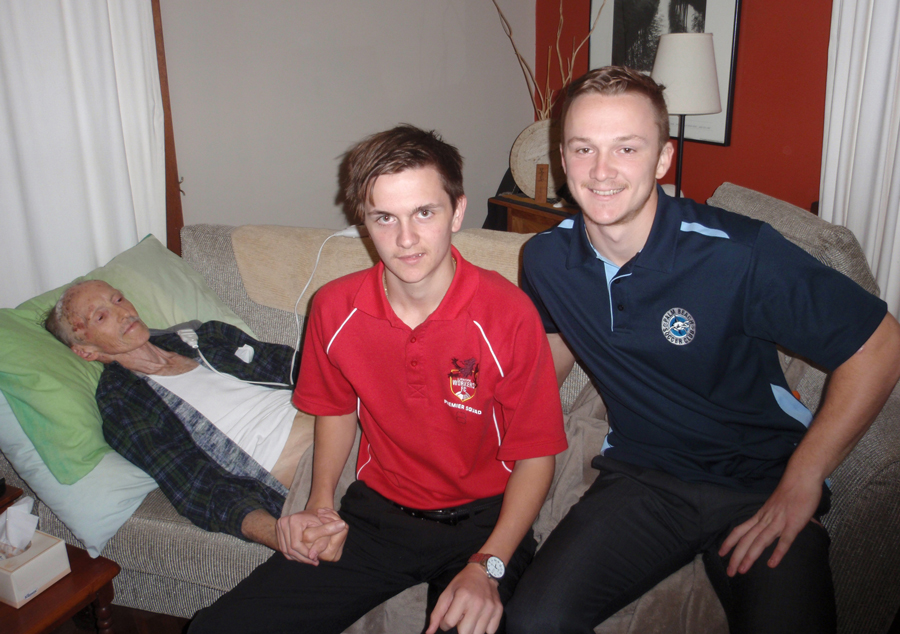 With Ben and Sam in their Workers and Palmy dress shirts, two days before he died. 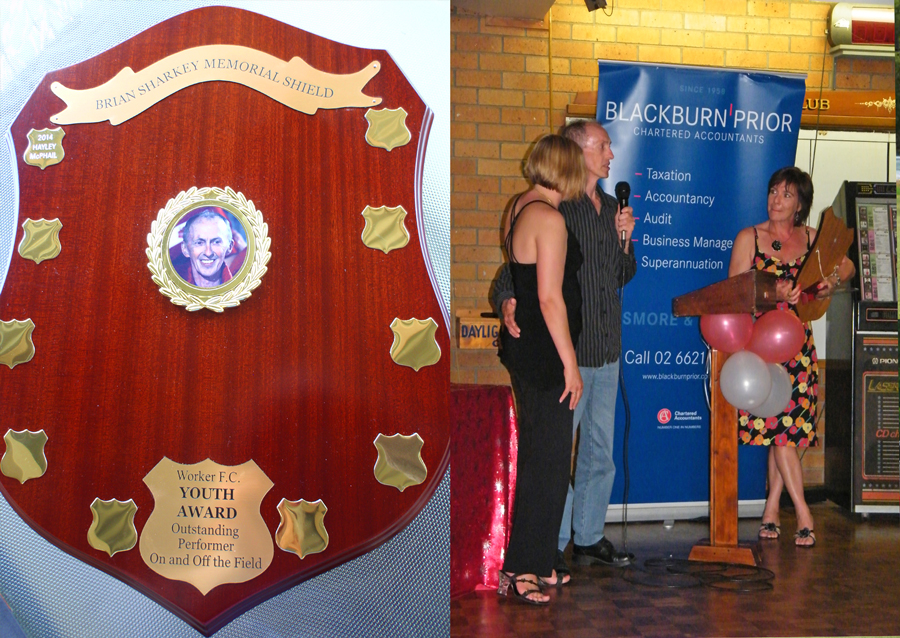 (left)The Brian Sharkey Memorial Shield, awarded to a junior player who contributes to the club’s positive image; (right) Brian, supported by Tanya Harris-Bateman, receives the Club Supporter of the Year award in 2011 from President Reyna Deegan. 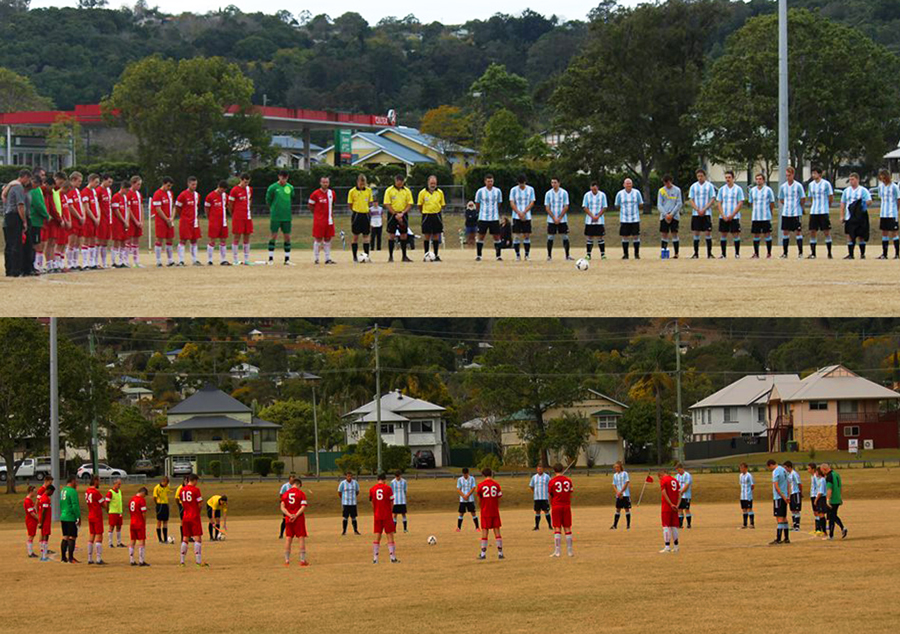 A minute’s silence for Brian before the Prems and Reserves games against Ballina, 25 July 2014. 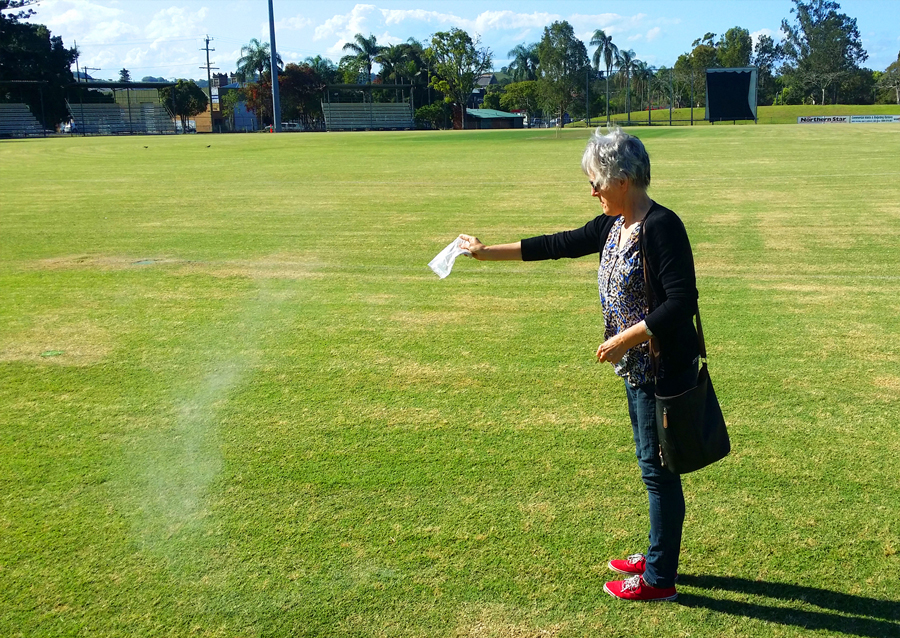 Scattering some of Brian on Oakes Oval on 10 October 2014. (top) The Redmen-ExMen teams playing for the Brian Sharkey Memorial Shield, 25 October 2015 and (bottom) these post-season games are as much about fun and camaraderie as winning.